The Mekong River is the life and soul of South East Asia. It’s crucial for much of the trade in the region and connects all of the neighbouring countries. It acts as country borders, is home to floating markets, and is vital for transportation in some areas.

But, fun fact – it’s actually home to a few tropical islands. That’s right, the landlocked country of Laos has tropical islands in the Mekong – 4,000 of them, to be exact.

Even though these are all technically ‘islands’, the vast majority of them are not habitable. The most developed is Don Det (although if you’ve just come from an island like Bali or Phuket, developed will be the last word that springs to mind!), although Don Khon and Don Khong are also open to tourists.

Things to do in Don Det 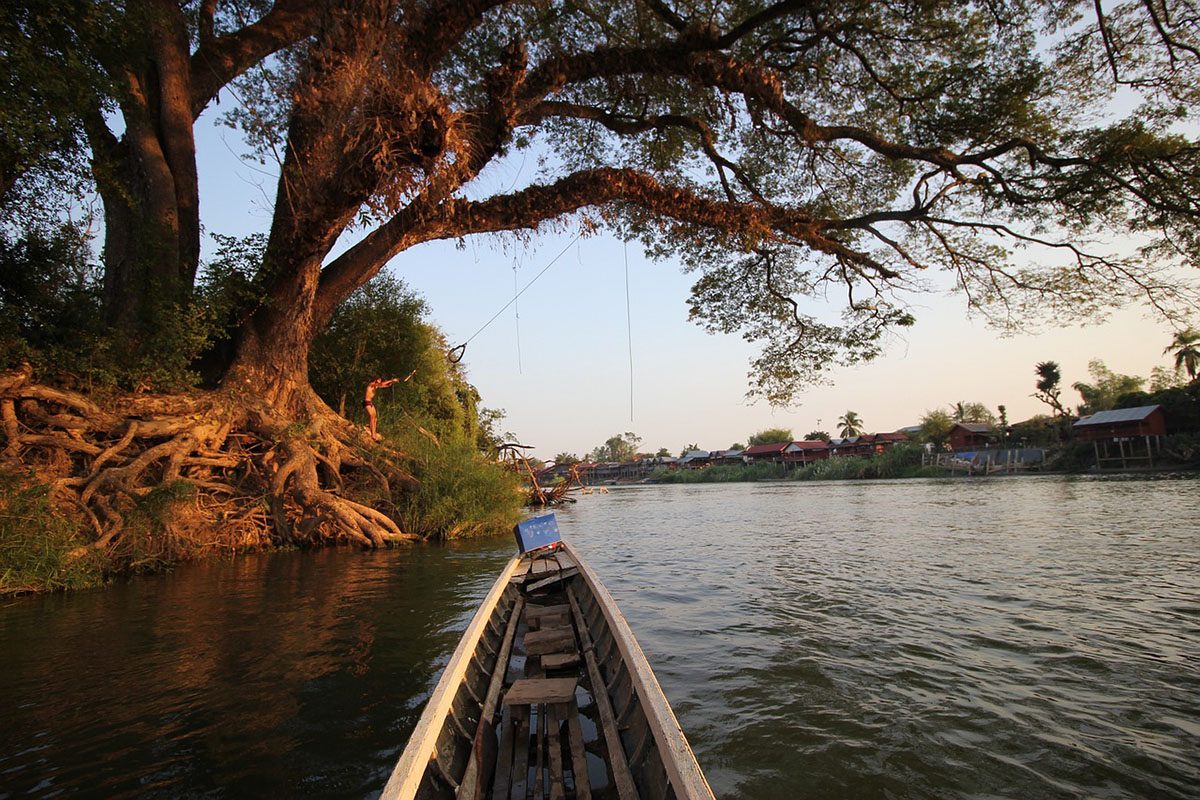 Bike Around the Island

The best way to see Don Det is at cycling speed. Life doesn’t move very quickly here, and zooming around on a motorbike just doesn’t feel right. (BTW, there are no cars on this island, just the odd tuk-tuk and motorbike). Bicycles are able to be rented from most guesthouses on the island. It’s great fun cycling around the entire island, checking out all the Mekong views.

But make sure you also cycle inland; you’ll be able to travel through rice fields and get a real sense of local rural life. Just watch out for snakes – there are a lot on Don Det!

However, it’s still well worth doing the tour for the kayaking experience and to have the chance of seeing the dolphins. Tours also include the Khone Phapheng Falls – more on them later! 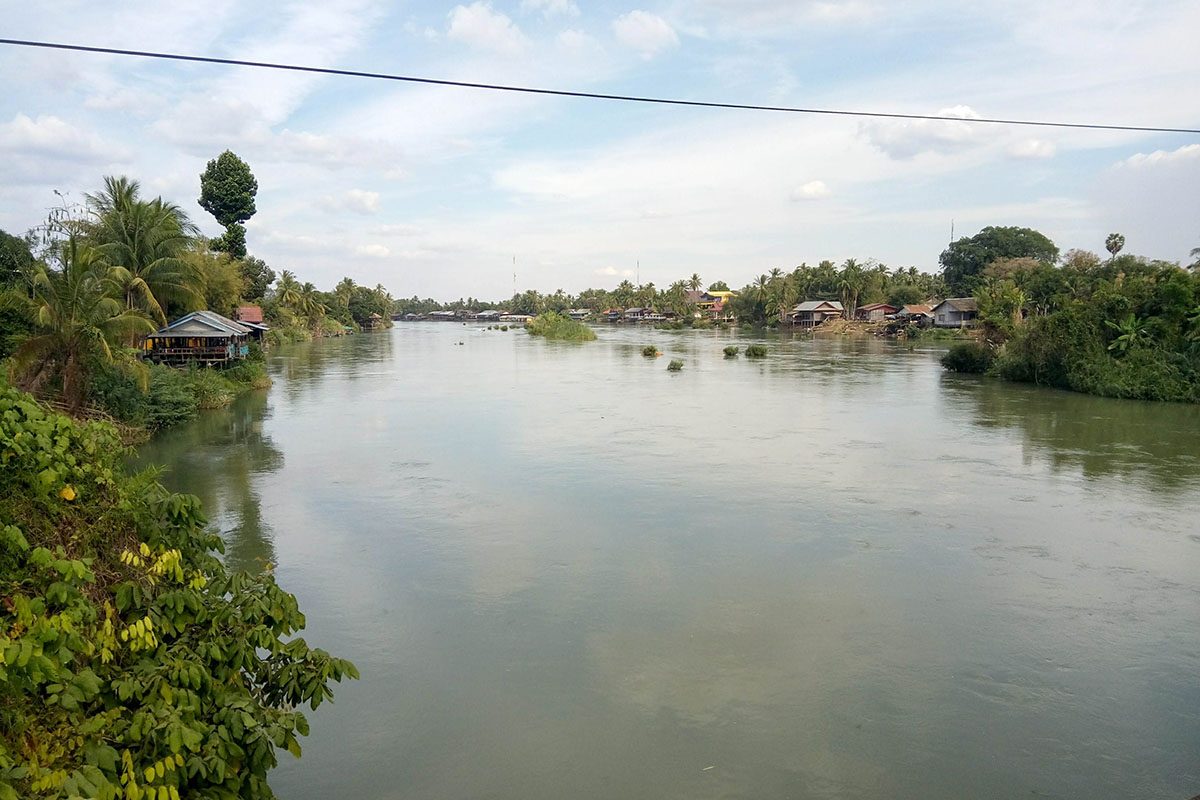 While Don Det has a more backpacker/ holiday vibe, Don Khon is much more chilled out and local-feeling. Kids run around in the streets, locals go about their business on sandy roads, and there are more Lao restaurants than tourist ones. Don Khon is definitely the place to stay if you want to get away from the tourists, but even if you’re staying on Don Det (there are a lot more options on this island), you can still get away to Don Khon to relax for a day or two. Things to do on Don Khon are a bit limited, but it’s nice enough to pull up a chair next to the Mekong and get lost in a good book – I recommend One Foot in Laos by Devla Murphy. 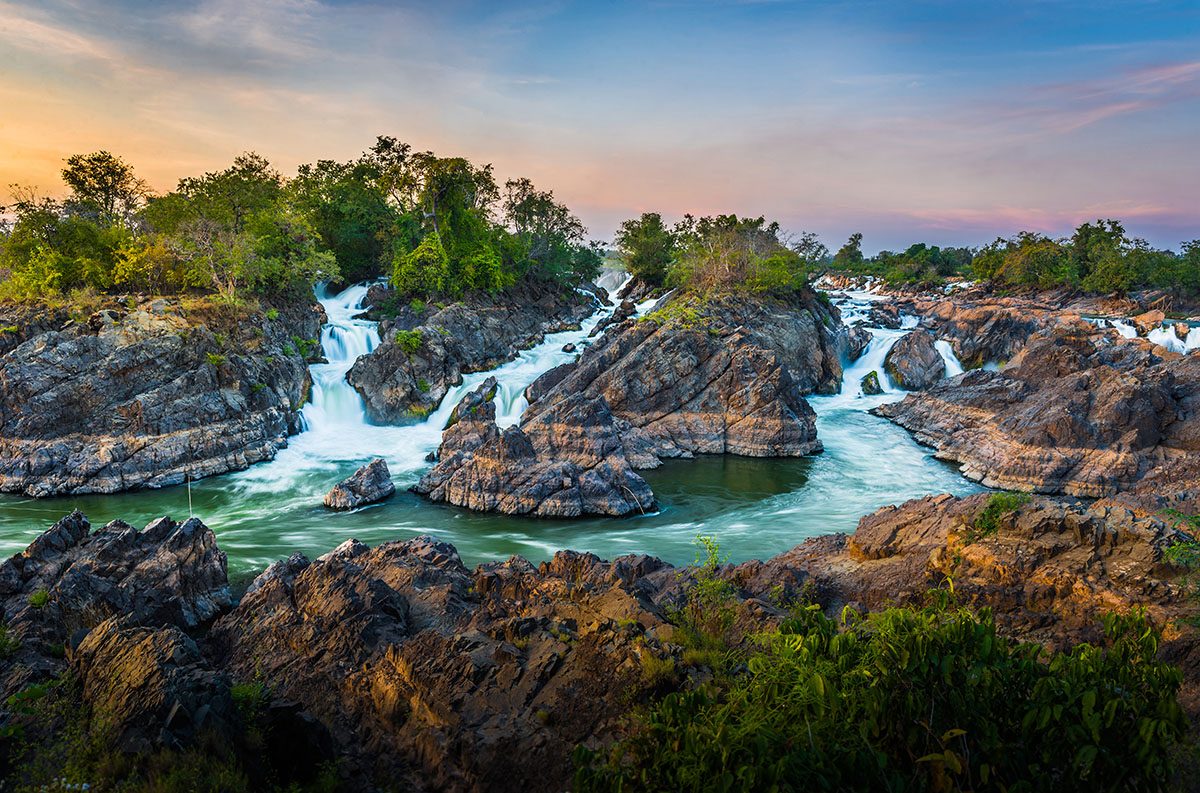 However, there are some things to do in Don Khon; one of the best being the Somphamit Falls. The rapids are an absolute marvel; and there are swimming spots available to enjoy and relax in.

If you’re after an adrenaline boost, think about ziplining over Somphamit Falls. There are various platforms around the Khone Phapheng Falls, and it’s a really stunning spot to whizz over!

There are also look out spots, walking trails and a cafe right by the falls.

Laze on the Beach

You can’t visit an island without factoring in some beach time, and Don Det is no exception. While it doesn’t quite have the beach scenes of Koh Lanta or Koh Chang in Thailand, it does have a few private beaches. One of these belongs to the Garden of Eden, an all vegan restaurant (more on it later in the post!) and visitors are free to use as long as they support the restaurant somehow. Apparently, you can swim in the Mekong here – although I can’t say I was too keen on that myself!

These are on the mainland, but located very close to Don Det and are one of the best things to do in 4000 islands region. They’re included in most kayaking day trips, but are still worth visiting if you decide not to do the trip – the main reason for this being that they are the largest falls in South East Asia, and are the main reason why the Mekong is not navigable from China.

The body of the falls is pretty impressive, and they’re a fun little side trip from Don Det. It costs 55,000 kip for entrance into the park. 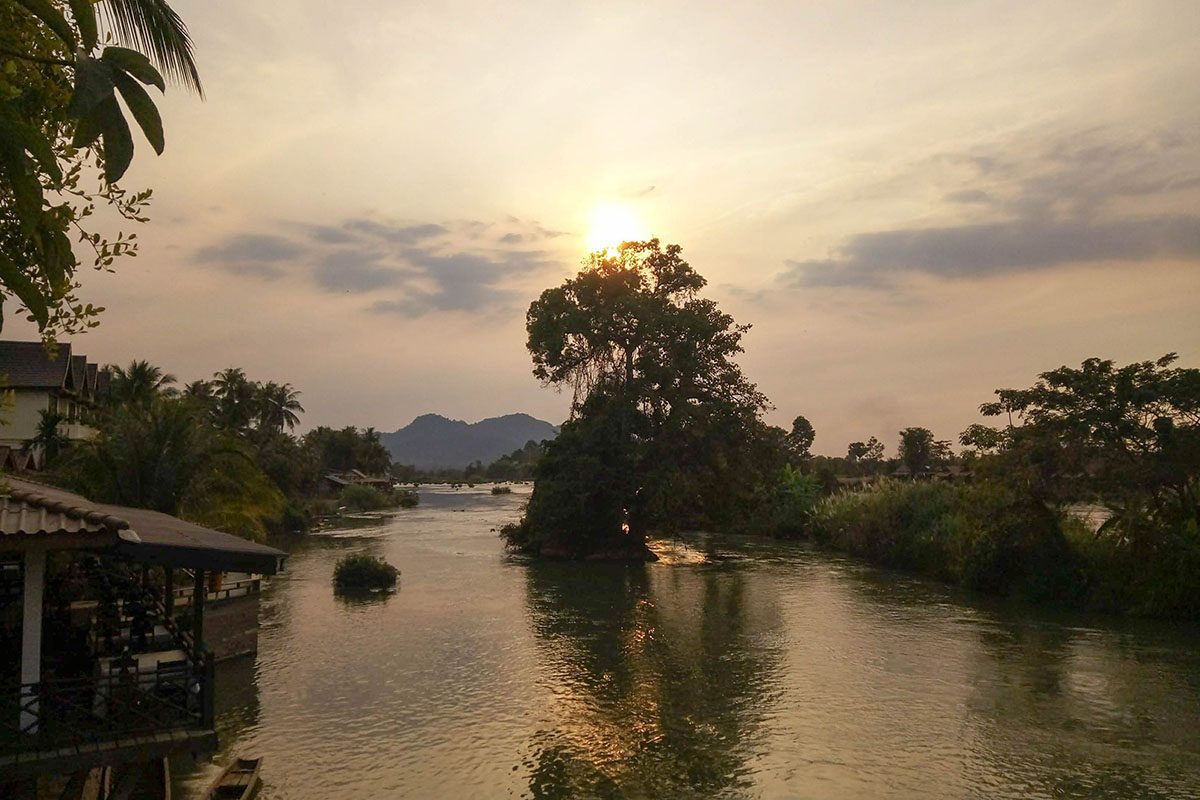 Laos is home to plenty of spectacular sunsets, and Don Det’s are some of the most famous. The most popular vantage point is the bridge that connects Don Det to Don Khon, but you can catch the sun descending from pretty much anywhere on the island with a west-facing river view. If it’s somewhere where you can grab a BeerLao and toast to another wonderful day in this country, even better!

Bonus: if you’re an early bird, head to the east side of the island for a magical sunrise too!

Picture the scene: a hungover girl (me) arrives in Don Det after an 10 hour journey and a very heavy night involving five too many mojitos the night before (Mad Monkeys in Siem Reap is a really fun hostel, but their happy hour was the death of me).

Unwilling to walk the 15 minutes to her guesthouse, she gets into a tuk-tuk to take her there. The tuk-tuk driver immediatley tells her that there is a beach party in the hostel next door to her guesthouse that night and invites her along.

I couldn’t think of anything I wanted to do less than go to a beach party after that journey/ hangover. But the music was so loud that not only did it keep me awake until three in the morning, but I couldn’t even focus on reading, and my whole room was shaking.

But what I didn’t know before visiting Don Det was it’s quite the party place. For me this was a bit uneccessary, it doesn’t seem like somewhere that needs to be a party place – but heyho, apparently it is. Apart from this night in Siem Reap (let’s not talk about that), I’m not a massive drinker, so I didn’t get too involved in the party scene in Don Det, but just a heads up, if you want to party, it’s there.

Oh, but if you’re partying in Easy Go Hostel at 3am, please ask the bar to think of their neighbours and turn the music down.

Places to Stay in Don Det 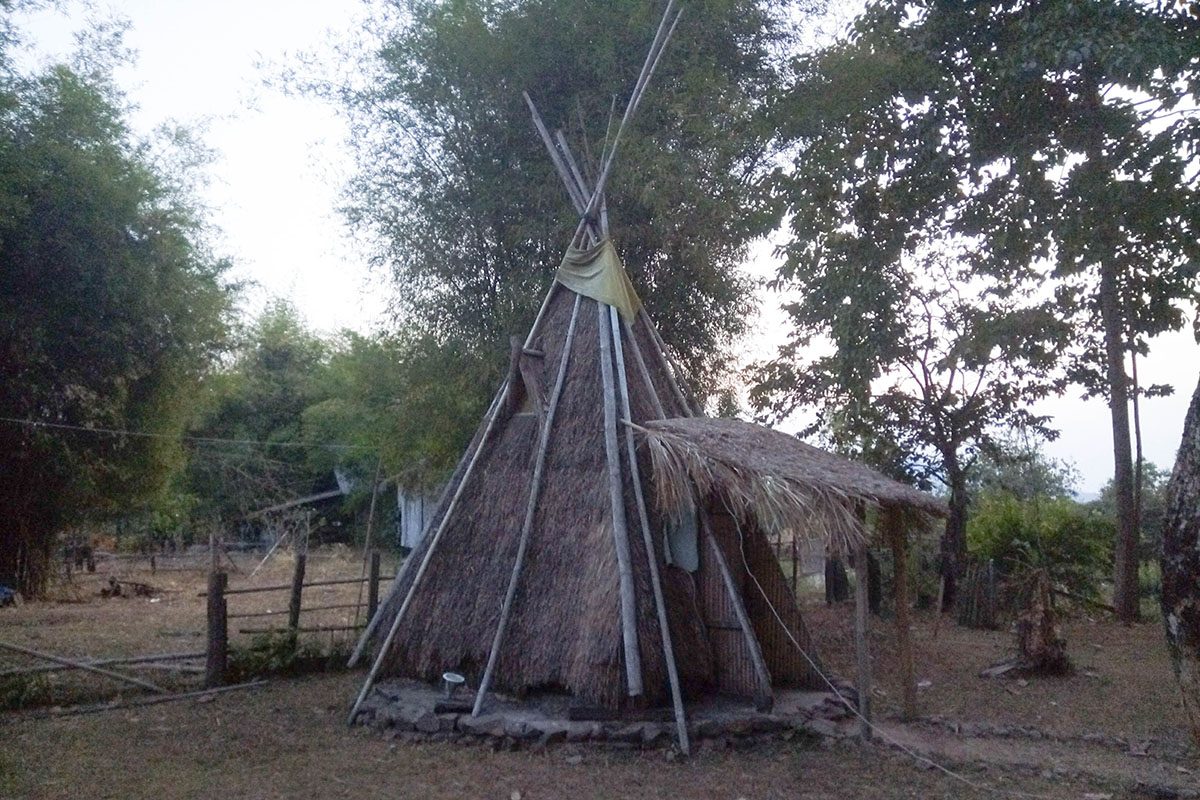 Hostel: For a budget stay with a difference, The Last Resort offers tipi style acommodation. Tipis are very basic but still very nice, with electricity, a comfy bed and a mosquito net. It’s probably not the place for anyone who doesn’t like bugs, but it’s a great glamping-style experience. Click here to learn more information.

Mid-Range Hotel: Champa Mekong Bungalows has a lovely restaurant over the river, where you can enjoy dinner and a gorgeous Don Det sunset. Rooms are basic but comfy, with double beds and private bathrooms. Click here for rates and to reserve.

Luxury Hotel: Little Eden Hotel is probably the most luxurious of the places to stay in Si Phan Don. It has a great swimming pool, which is welcomed in Don Det – it’s hot here – as well as stylish, airy and spacious rooms. Breakfast is included in the room rate. Click here for rates and to book.

Where to Eat in Don Det

There are lots of places to eat in Don Det, and to be honest, a lot of them are very similar. If you walk down the main drag, there are lots of spots all serving similar stuff – curries, soups, salads and also some spots serving up burgers and pizzas. There are also a few great Indian restaurants in Don Det, including Jasmin Indian which is cheap and delicious.

I’d also highly recommend Garden of Eden Vegan Restaurant. With a comprehensive menu, it’s a great spot to get some delicious plant-based food on the island. I had some great fresh spring rolls and a delicious curry while relaxing at their on-site beach.

How to Get to Don Det

First and foremost, you need to get to Don Det. You can reach it from Siem Reap in Cambodia, or Pakse, which is a few hours’ drive north of Makasong (where the boats form Don Det arrive into).

You can book accommodation from Siem Reap or Pakse here.

If you’re planning on visiting Don Det from elsewhere (some people travel from Bangkok, cities in Vietnam, or anywhere else in South East Asia), you’ll need to go through Pakse.

Here’s your one stop Laos travel shop (or Laos travel library, more like, but just doesn’t have the same ring, does it?)

Oh, and don’t forget my awesome one month in Laos itinerary that basically has all the information you need.

If you’re heading elsewhere in South East Asia, check out my Bali itinerary, my Vietnam itinerary, my China itinerary, and my Bangkok itinerary. And there’s more to come!