Not many tourists make it to Savannakhet in Laos. It’s kind of midway between the tubing of Vang Vieng and the chilled 4,000 islands; meaning many travellers skip past it on a night bus or don’t even go to through part of the country.

Now, while I think it would be a crying shame for travelers to Laos to miss the Boleavan Plateau near Pakse or the magical caves around Thakhek, Savannakhet is not a bucket-list kind of place. It’s a very quiet city with a few attractions, but it’s still pretty nice.

It’s not somewhere you could spend a week – you can enjoy all the best things to do in Savannakhet city in just one day – but it’s definitely worth a stop over if you’re heading north or south.

It’s on the route from Vientiane or Thakhek to Pakse (or vice versa) and let’s be honest, Laotian buses are long and uncomfortable – I decided to stop in Savannkhet while travelling just to be able to stretch my legs!

Savannakhet is also a popular place for visa runs from Thailand. It sits just over the Mekong from its neighbour, and has a friendship bridge that acts as the border crossing. So you may find yourself spending one day in Savannakhet while topping up your Thai visa – and you may as well enjoy the best Savannakhet attractions while you’re here!

Things to do in Savannakhet City 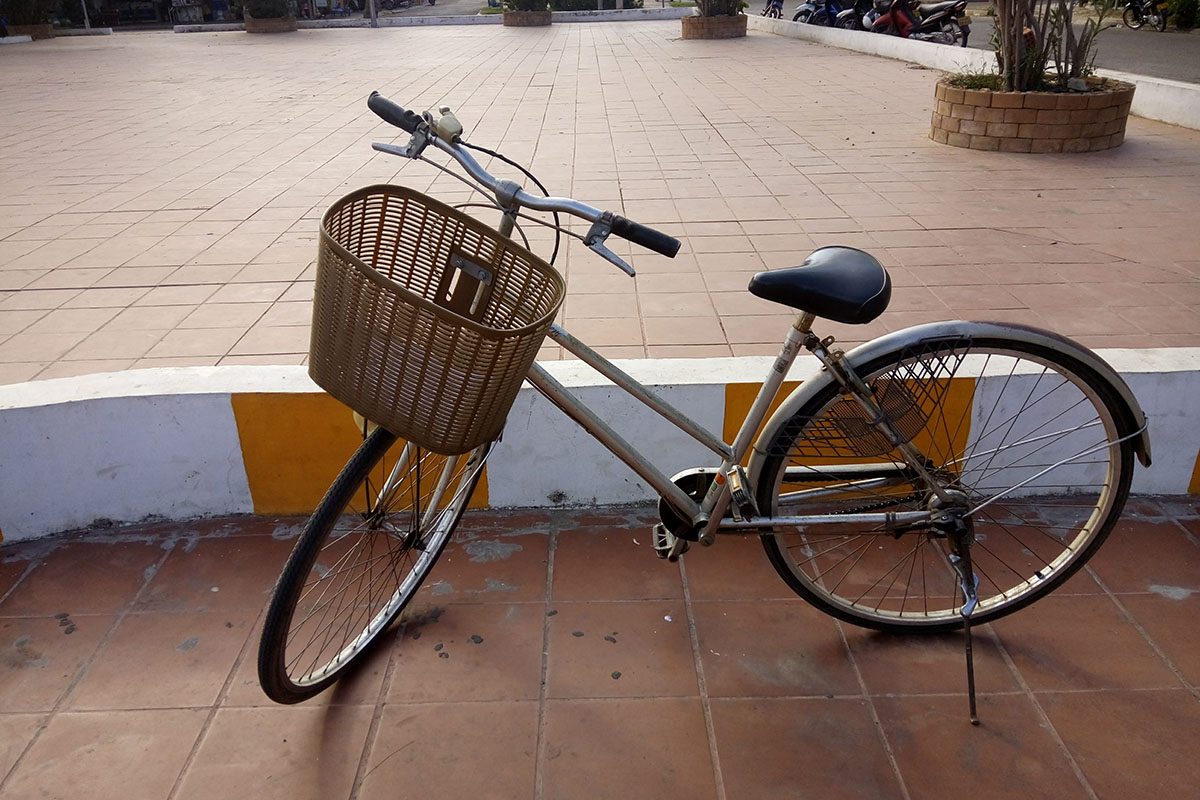 Savannakhet is ridiculously chill. Not just by South East Asian standards, but by global standards. The traffic is pretty much non-existent and the roads in the centre are generally in good condition – making it perfect for cycling!

Most guesthouses will offer bikes for rent – mine cost me 25,000 kip for 24 hours. Just grabbing one and biking around the Mekong area and the city centre is a pleasant way to spend an hour or two – you can also pop into the Savannakhet Visitor’s Centre for information about the city and surroundings (staff there speak English). 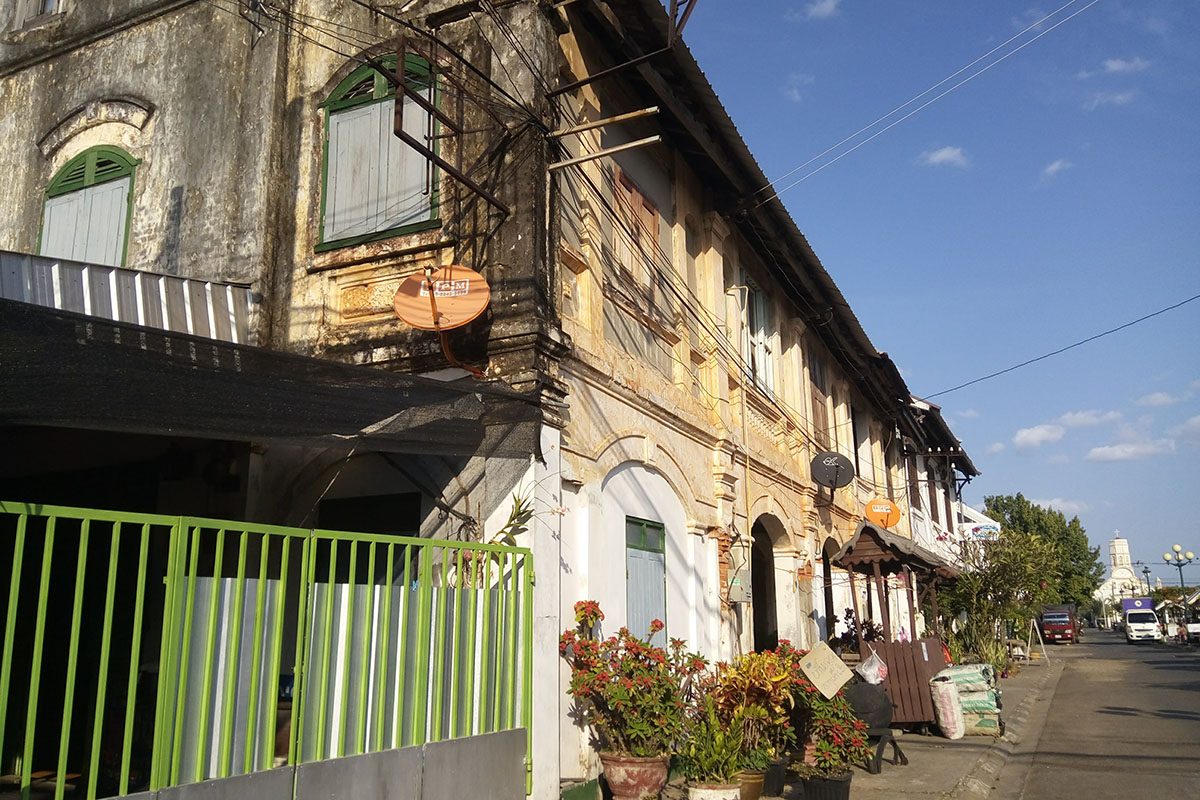 The city centre has lots of colonial architecture because Savannakhet was an important city during the French impearalist days. It’s interesting to bike around and see the different buildings – especially when they are contrasted to Asian style noodle shops or more oriental architecture. 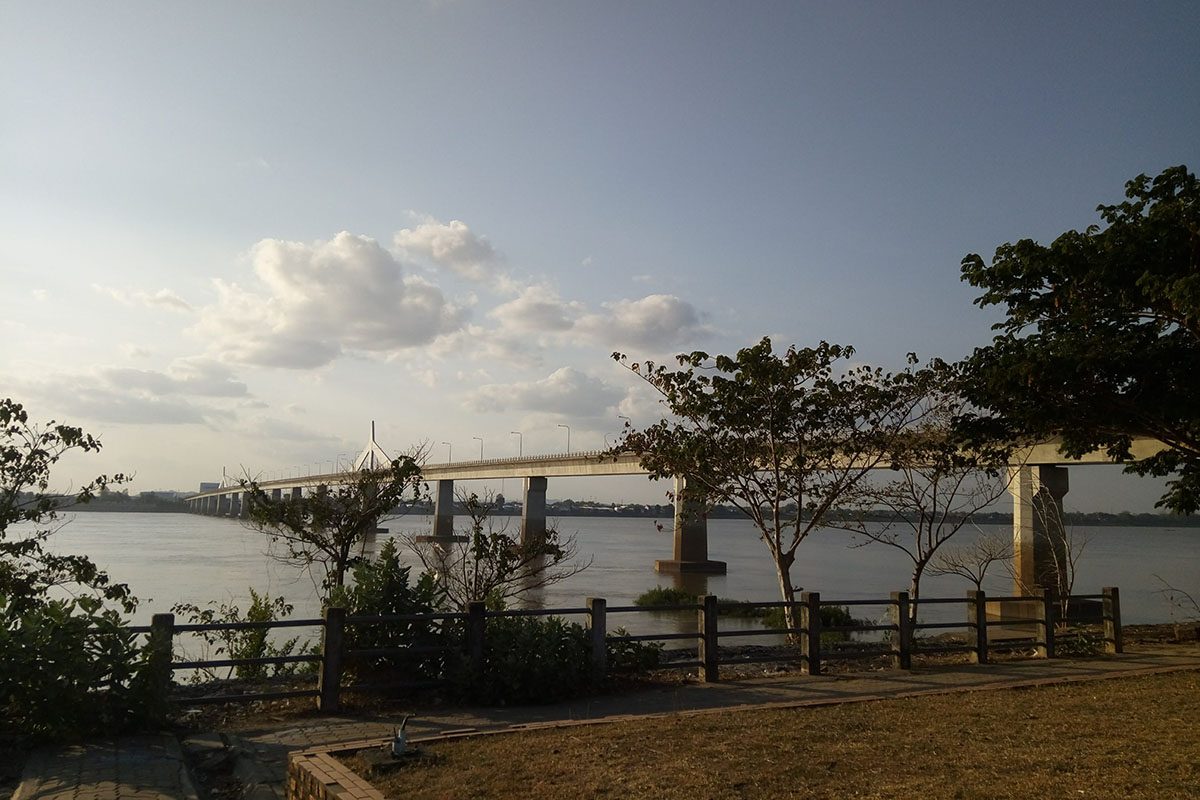 If you’re on a Savannakhet visa run, you’ll have already crossed the Friendship Bridge – but otherwise, it’s worth checking out! You’ll be able to see trucks and cars travelling to and from Thailand and – if you strain your eyes – the Thai flags and customs office in the distance.

The bike ride to the bridge leaves the city centre and any essence of tourism behind and is a fantastic way to see the real Laos. You’ll pass street food noodle stalls, local schools and authentic shops, shout ‘sabaidee’ to locals you see, and  – if you’re feeling adventurous – check out the local street food stalls (there’s a small market right under the Friendship Bridge). 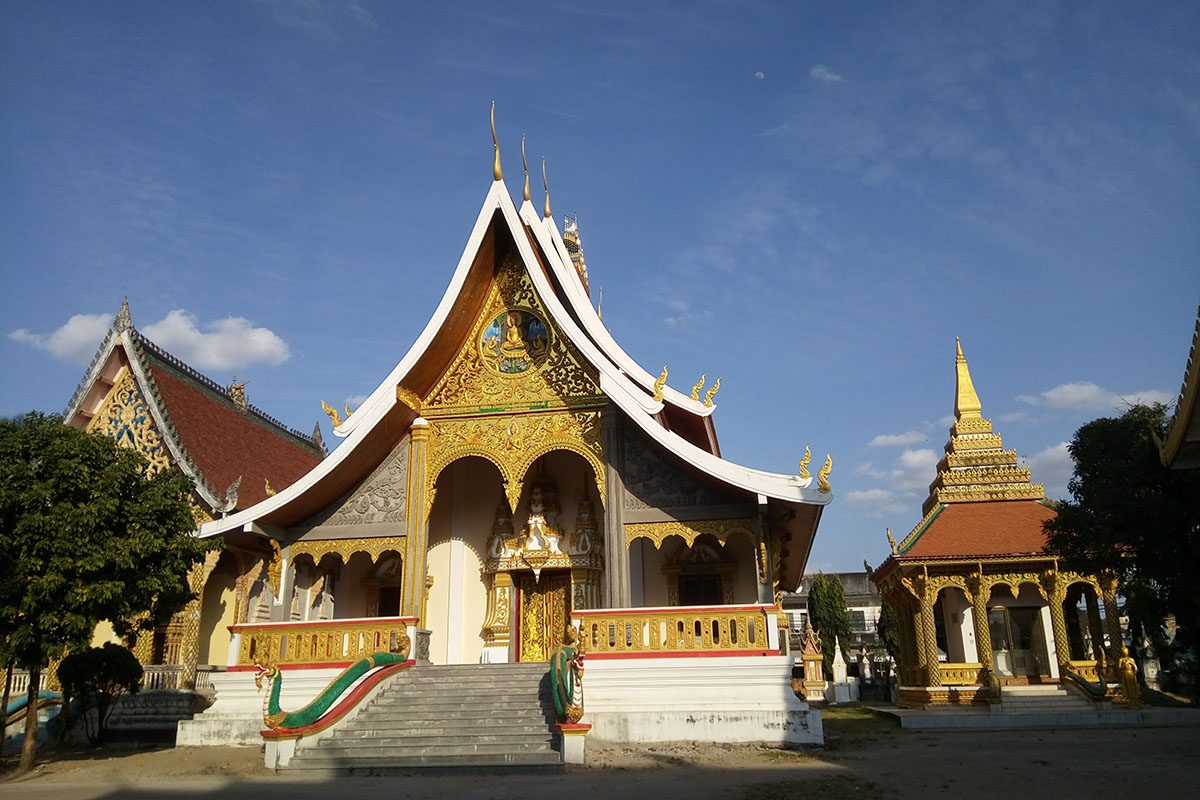 I’m going to make a wild assumption that Savannakhet is not your first destination in South East Asia, so I’m guessing you’ve probably seen lots of temples already. However, I did enjoy Wat Sainyaphum because it was really peaceful and had lots of greenery inside the grounds giving it a real tropical feel.

It is free to enter and explore, and when I was there I was the only tourist in the grounds – but lots of monks were walking around who were very friendly and welcoming. 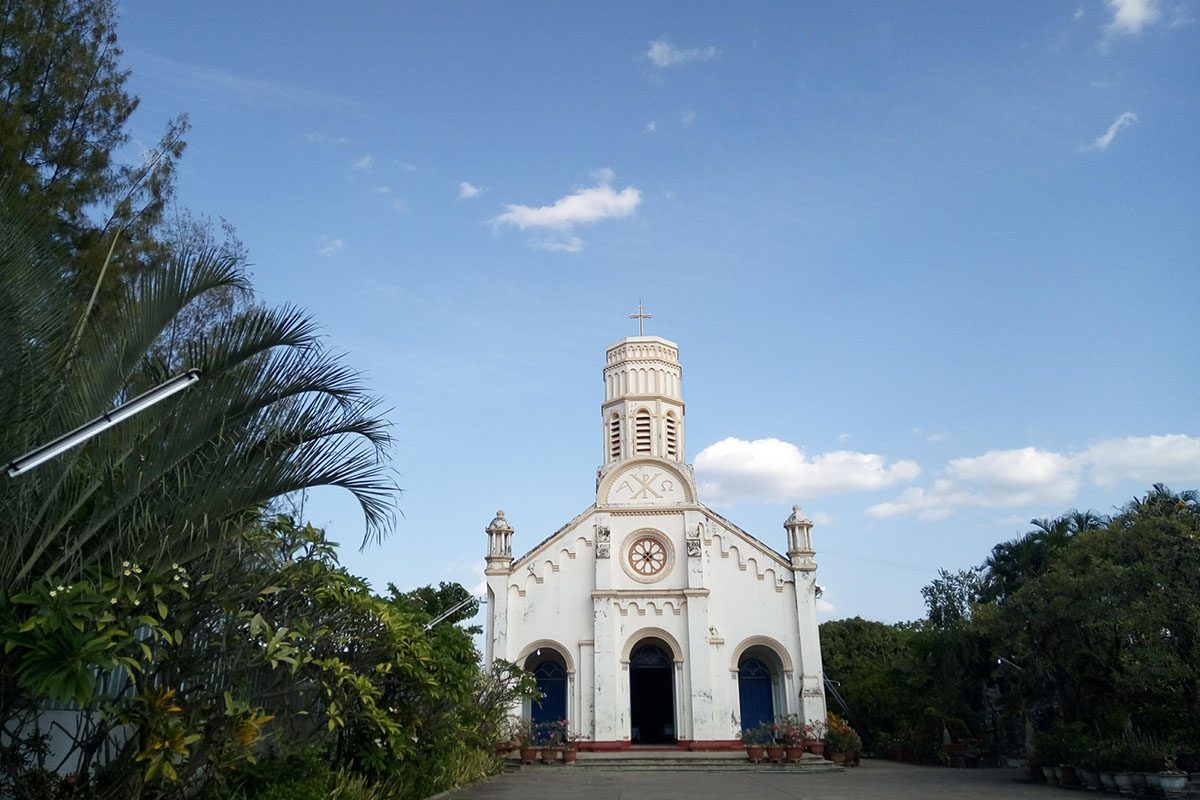 Bet you didn’t think you’d find a building dedicated to St Teresa in Laos? Because of the French colonial history, some Christianity in Savannakhet. Its church is very small and non-imposing but is worth checking out while biking around the city. Its position at the end of the main square which houses the night market makes for a great photo opportunity! 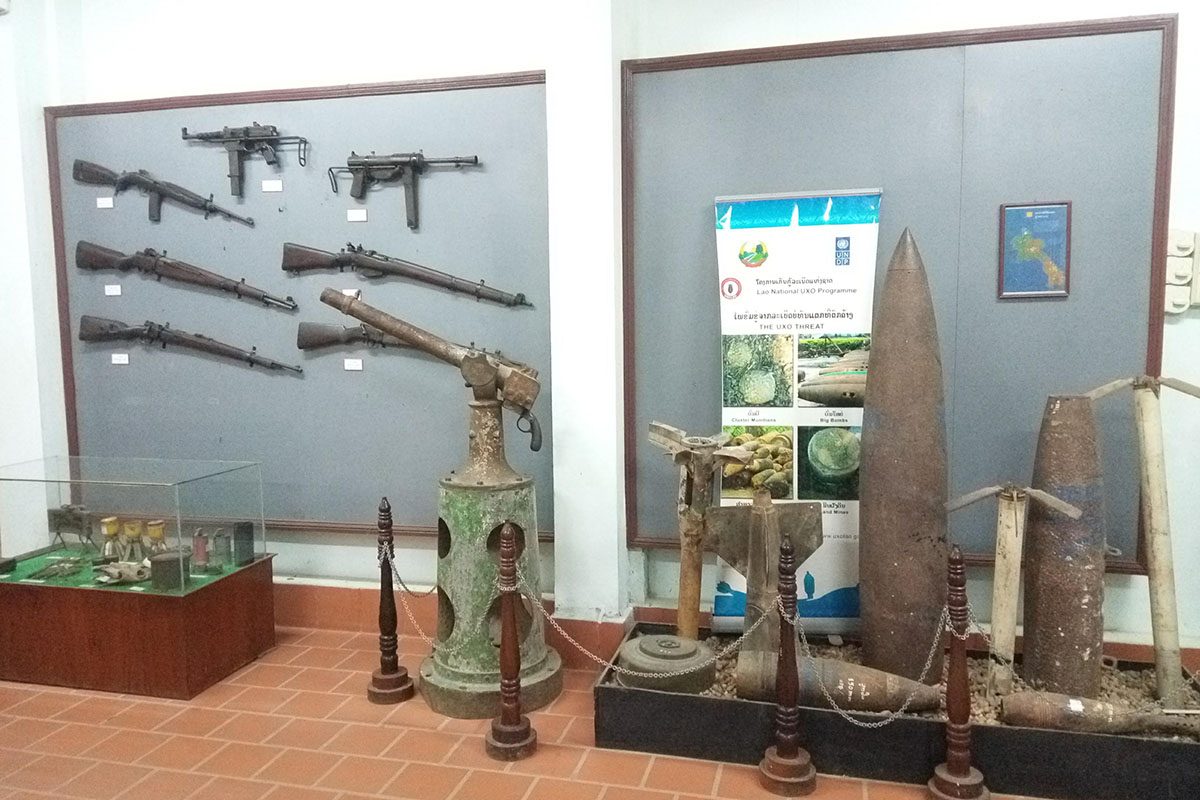 The Savannakhet Museum is without a doubt the smallest city museum I’ve ever visited. That being said, it houses some interesting photos and relics, including bombs from the Secret War in Laos, making it well worth a visit. It’ll only take you 20 minutes to visit, but at just 5,000 kip, it’s a bargain. 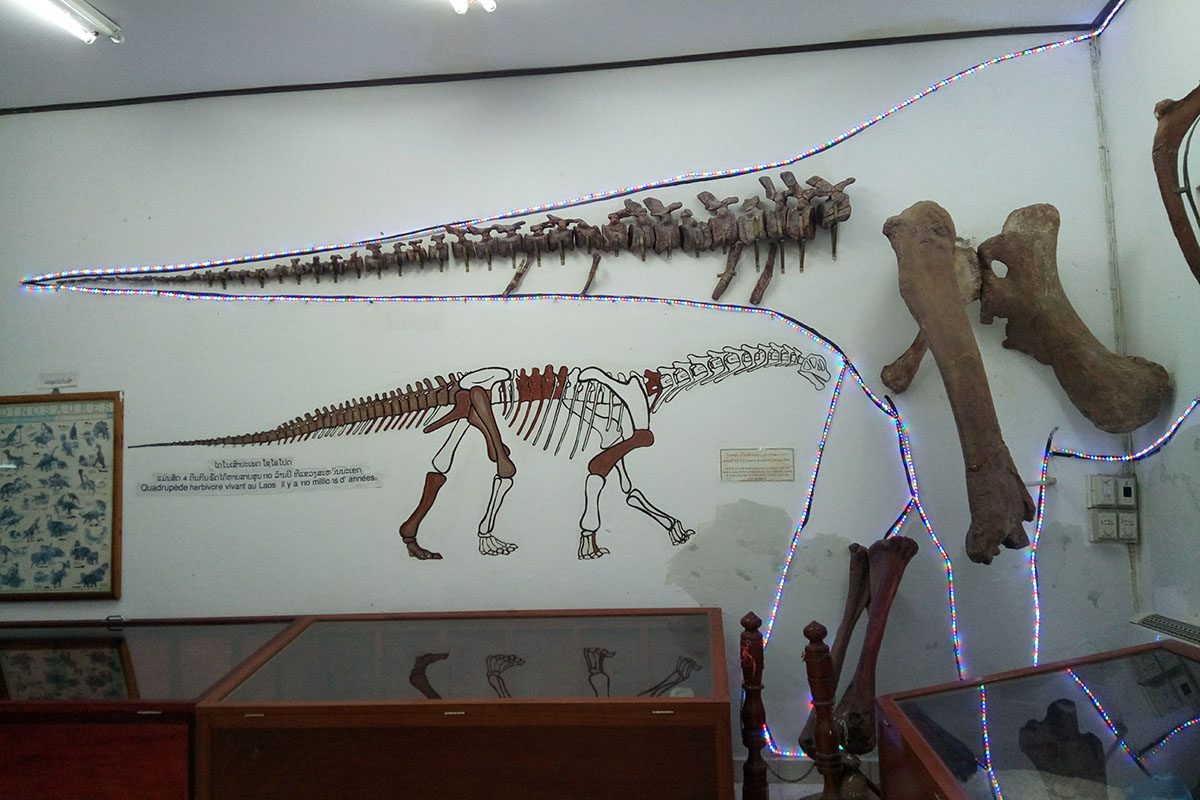 The Dinosaur Museum is one of the best things to do in Savannakhet if you’re a French speaker – the displays are in Laotian and French (not in English!). It costs just 10,000 kip to enter and displays dinosaur bones, ancient minerals and has quite a lot of information about dinosaur discoveries in Laos – but only in Laotian and French.

That being said, I haven’t spoken French in 8 years (although I studied it for 6 years at school) and managed to understand most of it – so it’s relatively easy French to understand. 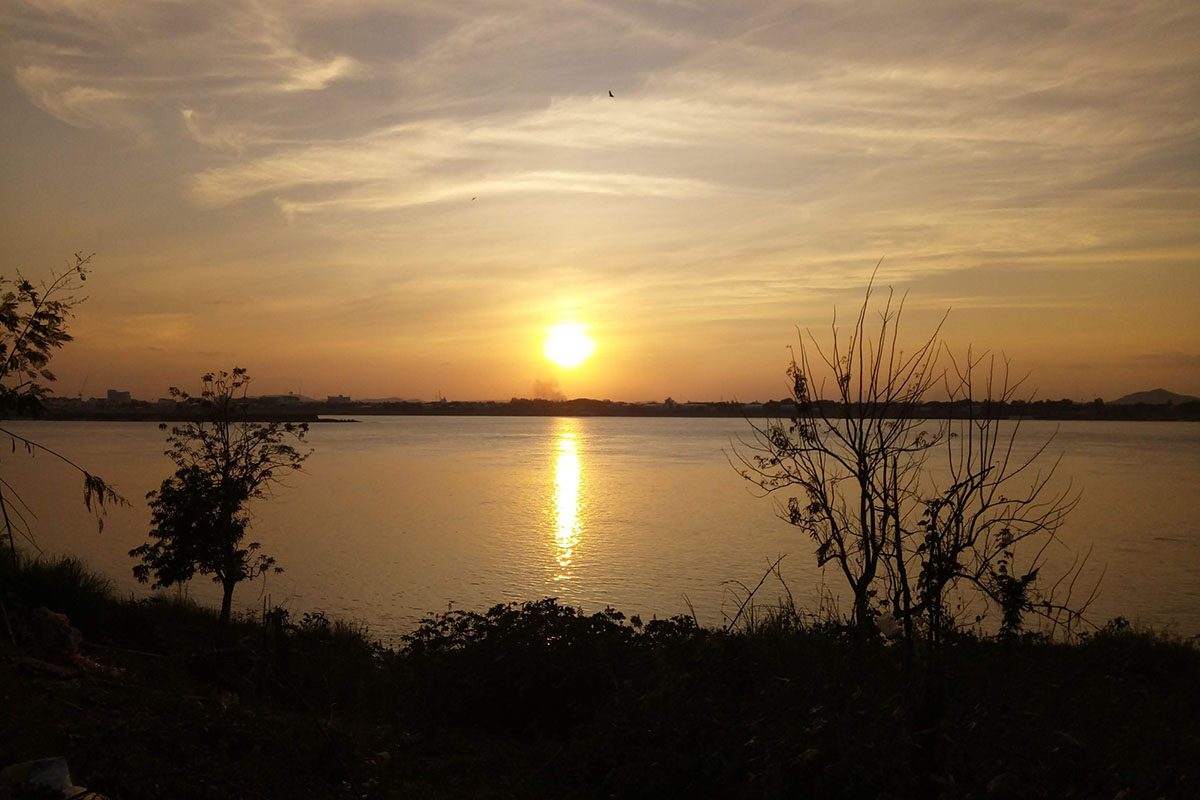 The almighty Mekong spans through China, Myanmar, Thailand, Laos, Cambodia, and Vietnam and is always a sight to behold – particularly when the sun goes down. You’ll be able to sip a cocounut in Laos while watching the sky turn pink and orange as it descends just above Thailand – what’s not to love? Head to one of the riverside bars to enjoy a Beerlao and watch the spectacle, or just grab a coconut from a street stand and admire it independently. 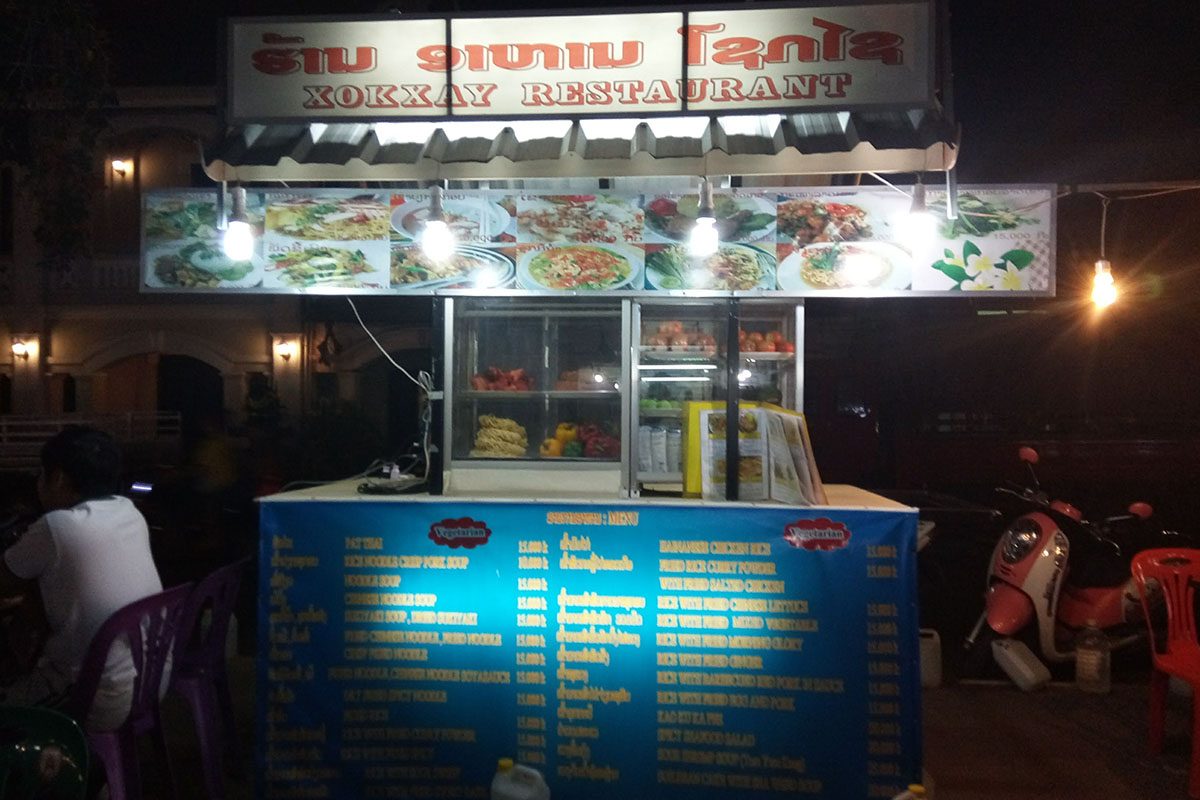 The Savannakhet Night Market is a great place to grab some street food and watch the world go by. In particular, Xokxay Stall (pictured) dishes up tasty meals, including some vegetarian and vegan dishes. I had the spicy fried noodles with tofu and vegetables which were absolutely delicious – and the table next to me reckoned it was the best place they’d eaten in Laos. Ya heard it here first.

Things to do in the Savannakhet province

Most people passing through the city are just there to spend a day, if that, in Savannakhet – but there are some great things to do in the surrounding area, including nature spots, if you fancy seeing them!

Savannakhet’s answer to Vat Phou in the Champasak province, its stone house is the remains of a rest house built by King Jayavarman in the 12th and 13th centuries. The fascinating Khmer ruins are enchanting and definitely worth a side trip to while in Savannakhet. It is located about a 20 minute drive from the city.

This Stupa is believed to be where Budhha delivered a sermon and may be where part of Buddha’s spine is preserved. If that’s not two great reasons to visit, I don’t know what is. A stupa has been on the site for 1500 years.

This is a traditional rural area with lotuses, rice paddies and bird life – very photogenic! Unfortunatlely the turtles, which the lake is named after, are no longer there, but it is still worth seeing while driving around outside the city.

This ancient forest is a beautiful photo spot and is a great place to learn about the flora of the region – plants here are collected for food and medicinal purposes and have been for thousands of years.

Part of the Ho Chi Minh Trail is accessible from Savannakhet – although it should be visited with caution. Laos is the most bombed country in the world; which happened in the ‘Secret War’ which was simultaneous to the bombing of Vietnam. There are still unexploded mines in the countryside and people still die from them going off today. It’s best to ask tourist information about how to visit there. If you’re visiting Vietnam, a more popular alternative is to do a Ho Chi Minh Trail tour from Hue to Hoi An.

Like the whole of Laos, there are a few lovely waterfalls in the Savannakhet province. Most of these actually lay in the eastern part, towards the Vietnam border – so you won’t be doing them in a day trip from Savannakhet! But if you fancy an adventure and seeing something different, then ask the tourist information office about Phalong Waterfall and Sepon Waterfall. 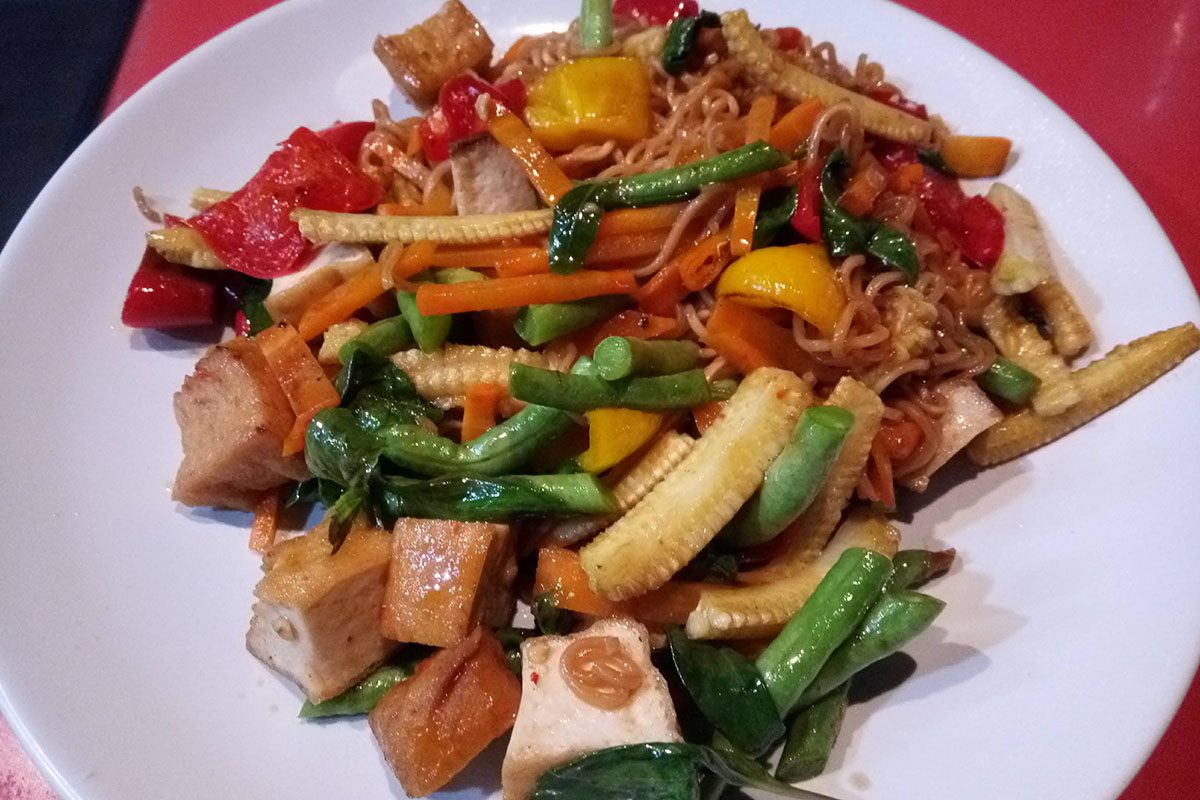 As well as the dozens of noodle shops and night market, there are a few different options for restaurants in Savannakhet. You’ll be able to find Laotian food on every street corner, but two options for international food (both of which have vegetarian options that can be adapted to vegan) are:

Pilgrim’s Inn and Café – this is a nice cosy travellers’ hangout, with an extensive menu featuring Laotian, Indian, European and Mexican food. While this sounds a bit ambitious, I can attest that at least the Indian food is very good. They also serve coffee and drinks and have a lending library.

Lin’s Café – in prime position by the night market, Lin’s Café is open for breakfasts, lunches and dinners. Its menu is mainly Asian, but they do offer burgers (including a veggie burger!), sandwiches and pasta. They also do a delicious coconut coffee! 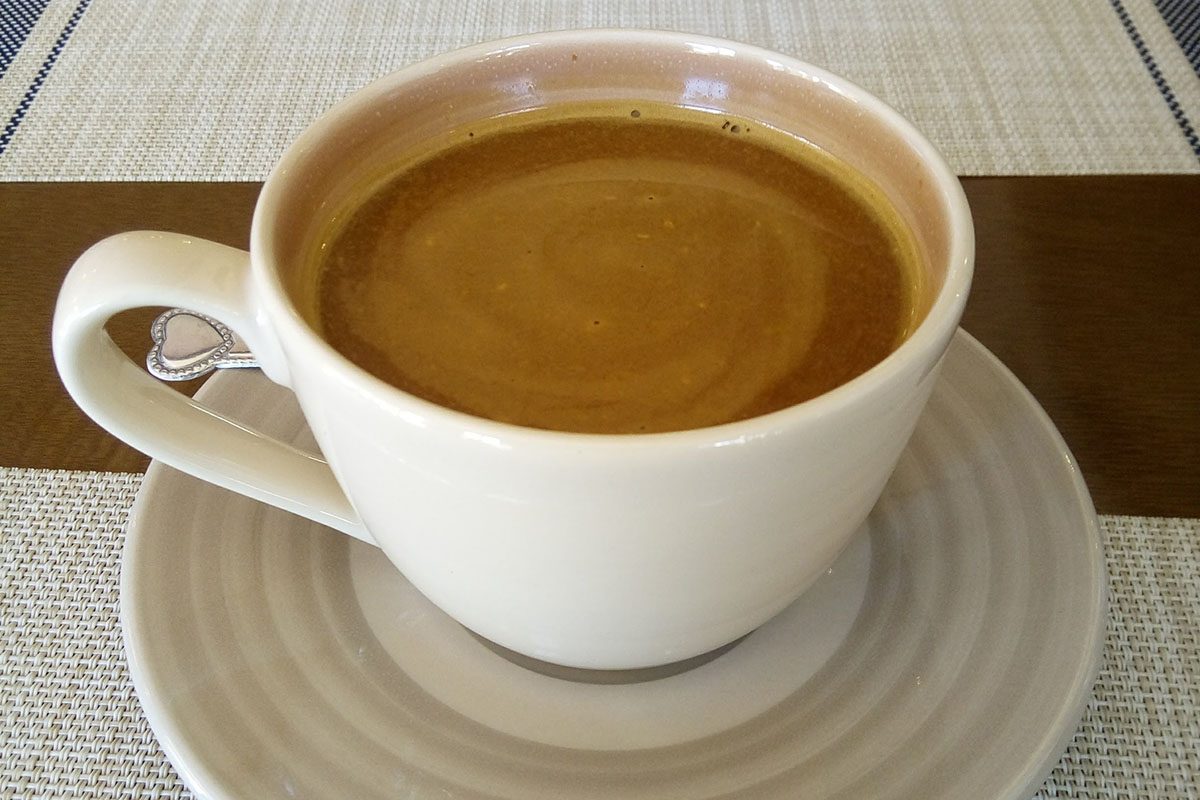 Savannakhet hotels are all pretty similar – you won’t find any super budget hostels or 5* hotels here. They’re all 2* or 3*, generally simple guesthouses.

I stayed in Sala Thongyon. It was a really decent place to stay just because of the rural garden bungalow setting – it would have been more in place on the island of Don Det than in the middle of a city! The bungalows were quite cute and good value, with a semi-comfy bed, hot water and ceiling fan. Wifi was pretty good. Click here to see rates and book.

If you’re after something easy, check out Aura Residence which is close to the bus station and has an on-site restaurant. Some rooms have views over the Mekong to Thailand, and all are comfortable and clean. Click here for prices and to reserve.

One thought on “The Best Things to do in Savannakhet, Laos”