I only spent a few days in Xi’an, but they were fantastic. Compact and easily navigable, the city centre boasts lo many exciting attractions and fun neighbourhoods to explore. The city actually sprawls far beyond the city walls, but most of the things to do in Xi’an are located within the 14 kilometres of the wall itself. If you’re wondering is Xi’an worth visiting, read on to find out why I loved the city.

Is Xi’an Worth Visiting? Reasons to visit Xi’an 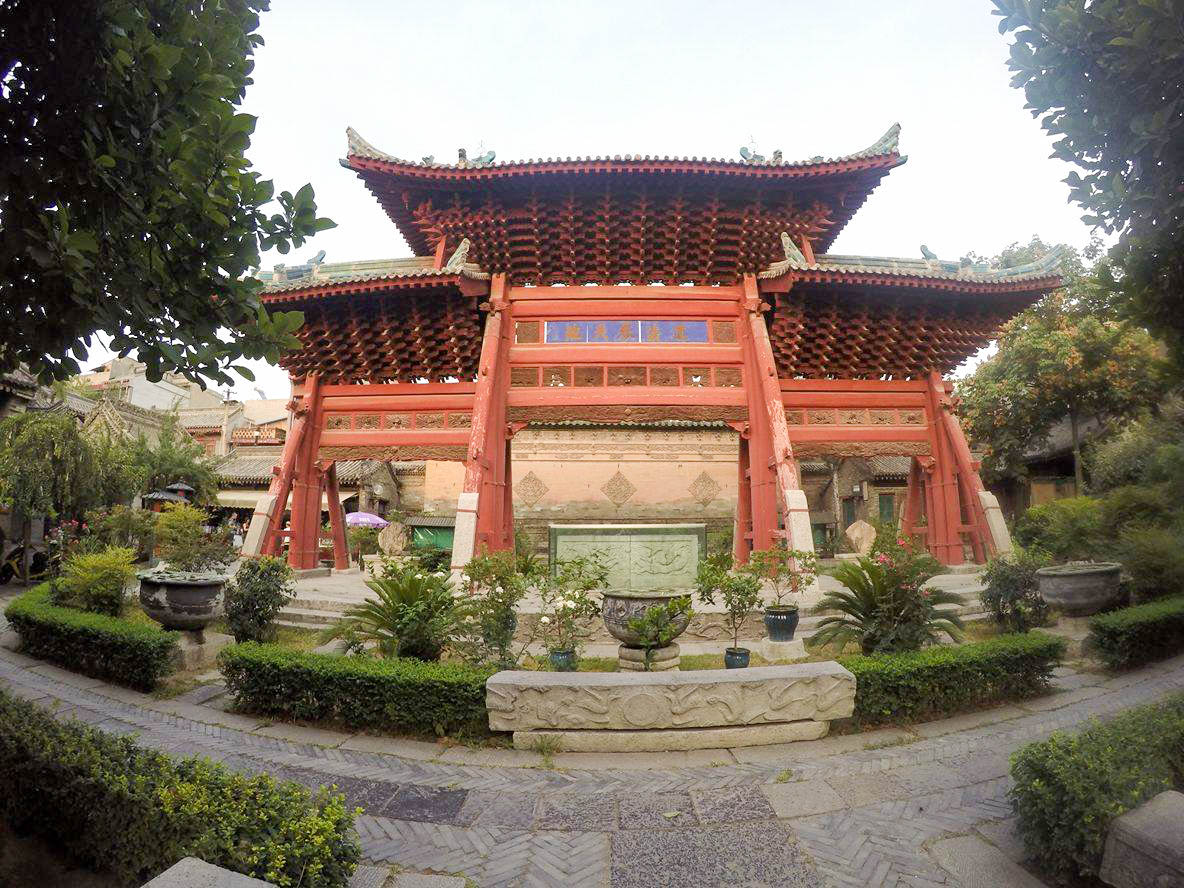 I’d really recommend adding a trip to Xi’an to your China itinerary because it’s a unique kind of city. It has been China’s capital numerous times in the country’s past and thus boasts an impressive range of history. From the fascinating Terracotta Army to the City Walls, there’s an interesting story from every historical era in Xi’an.

The Muslim influence of Xi’an means that it has a unique culture – a fusion of Far Eastern and Chinese Muslim. This society is well worth exploring; I could have spent days wandering around the Muslim Quarter and I loved the beautiful Mosque.

There’s so many things to see around Xi’an too; including sacred mountains, remote towns and villages, and the rest of China – it is a very central city, meaning that it’s a popular transport hub for trains crisscrossing all over the country.  Whether you’re on a tour of the East, coming North from Tibet or traversing the Chinese Silk Road (which Xi’an is the start of), this city is well worth a visit.

There’s so many things to love about Xi’an, and I wish I’d given myself more of my trip time there! But here’s the things I loved most about the city during my whirlwind visit.

Things to love about Xi’an 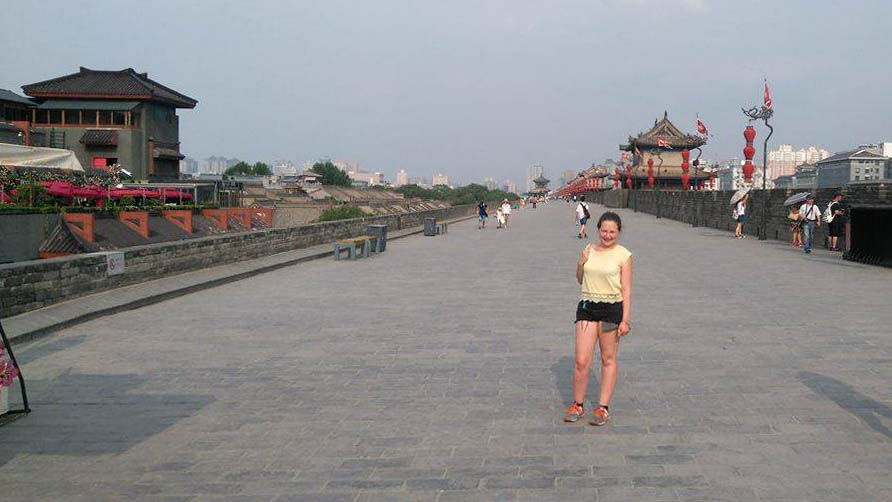 Exploring the city from above is a really unique activity, and this is possible in Xi’an. Lots of cities in China were once walled, including Beijing – but a great deal of them were torn down before and during Mao’s rule. But even though the walls in Xi’an are restored, they remain intact and possible to walk and bike around. 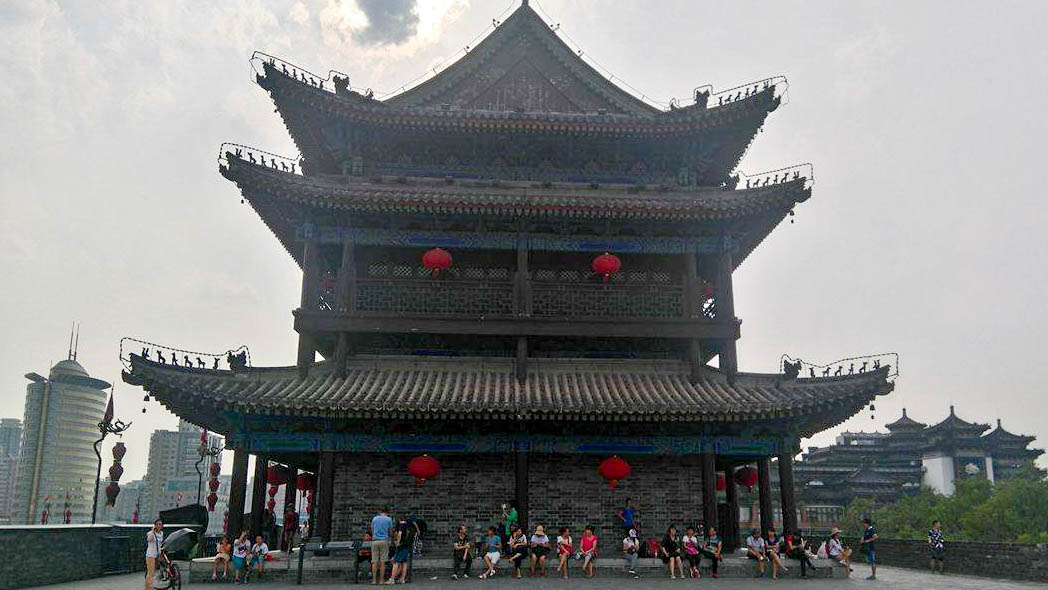 We walked around half of the City Walls, which took about 4 hours with lots of stops. It was possibly not the best idea to walk around these from 12-4 on a hot day in August, but it was lovely all the same! There’s great architecture, interesting exhibitions and fantastic views of both sides of the city along the wall. It costs 54 yuan to go onto the wall, and when we went it was peaceful and quiet (maybe because of the inhospitable time we decided to walk them!) 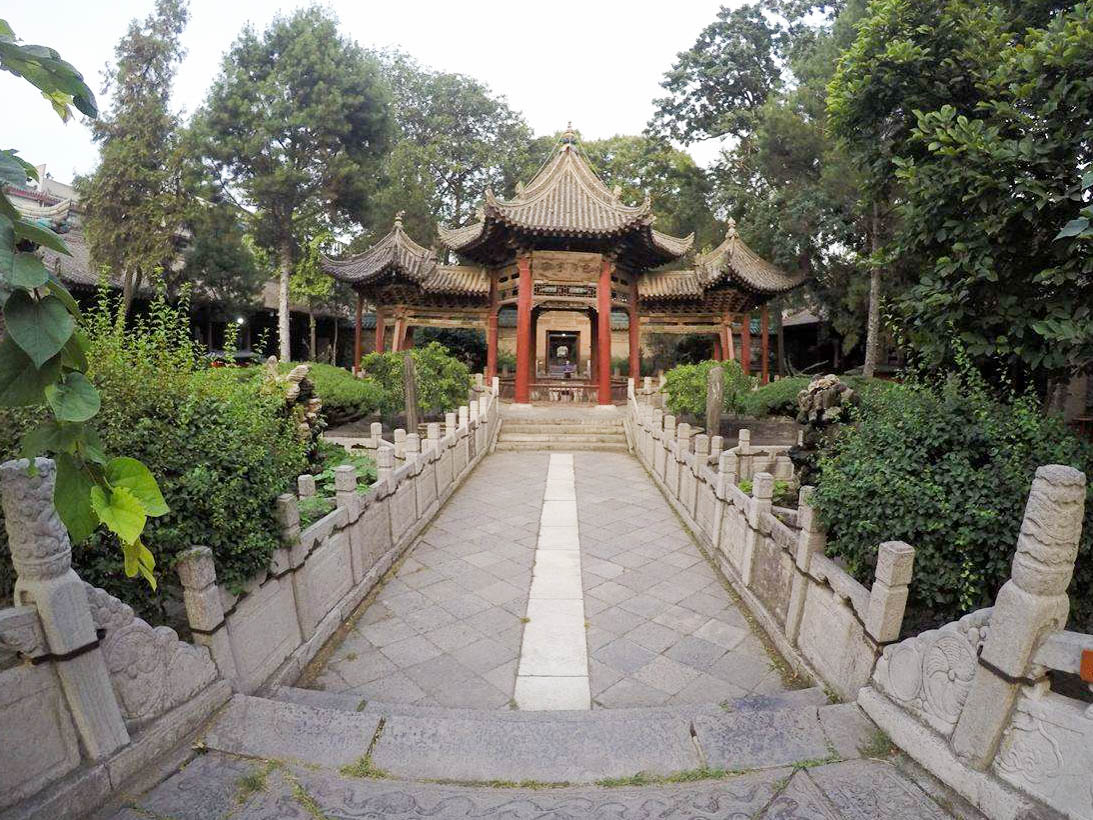 Xi’an’s mosque is a unique blend of Oriental and Islamic architecture. Completely different from any mosque I’ve ever seen before, but also not quite resembling a Temple, the Mosque in Xi’an is well worth a visit to experience the harmony between the two cultures existing in the city.

The gardens are peaceful, and welcome a leisurely walk around. There’s also lots of information on Islam, both in general and in China specifically, which is a great source of education about the religion in the area. Admission is 25 yuan. 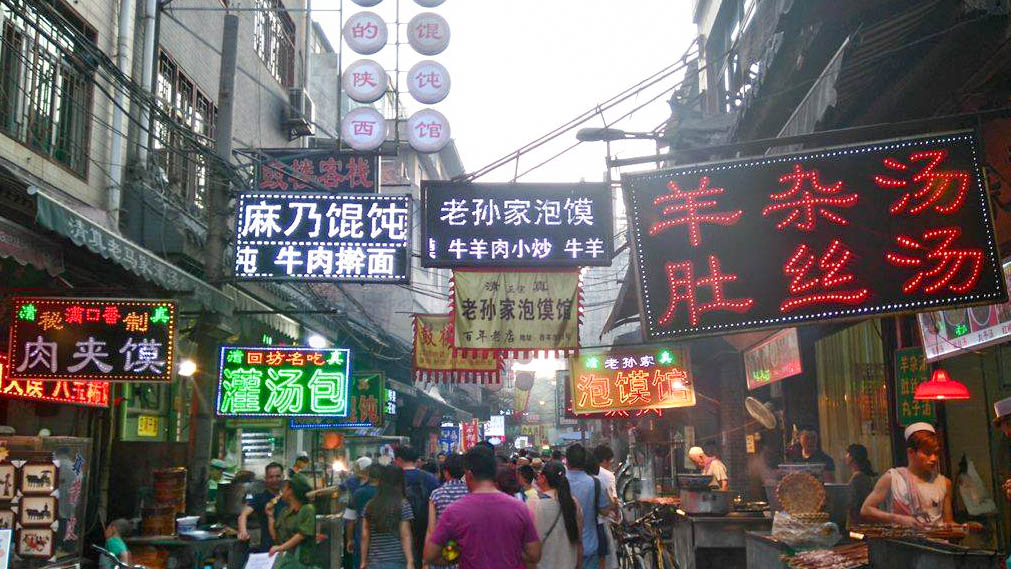 The mosque of Xi’an is based in the bustling Muslim Quarter, which is a busy area of the city full of restaurants, market stalls and street food. It’s another way to experience the fusion between Oriental and Muslim culture and cuisine, and the lively area makes a perfect destination for dining, shopping or people watching.

It’s best in the Muslim Quarter, as mentioned above, but the street food in Xi’an deserves its own special mention. In the Muslim Quarter there’s all sorts of mouth-watering options, perfect for all palates. A lot of the food is heavily meat based, but there’s plenty of options for vegetarians too: including potatoes covered with spice, garlic and herbs and delicious tofu dishes. Outside the Muslim Quarter, there’s plenty of other street food options which include barbecued food and noodles; many places have tables and chairs set up outside, so you can really enjoy an authentic street food dining experience.

Xi’an is a large city, but the area within the walls is walkable and therefore it is an easy one to explore. Compared to gigantic Beijing or sprawling Chengdu, Xi’an seemed to me manageable and less crowded. (However, this is China, so less crowded is still crowded!) I felt like the somewhat compactness of Xi’an, plus the friendliness and helpfulness of the locals, made the highlights of the city easy to find, explore and really enjoy. 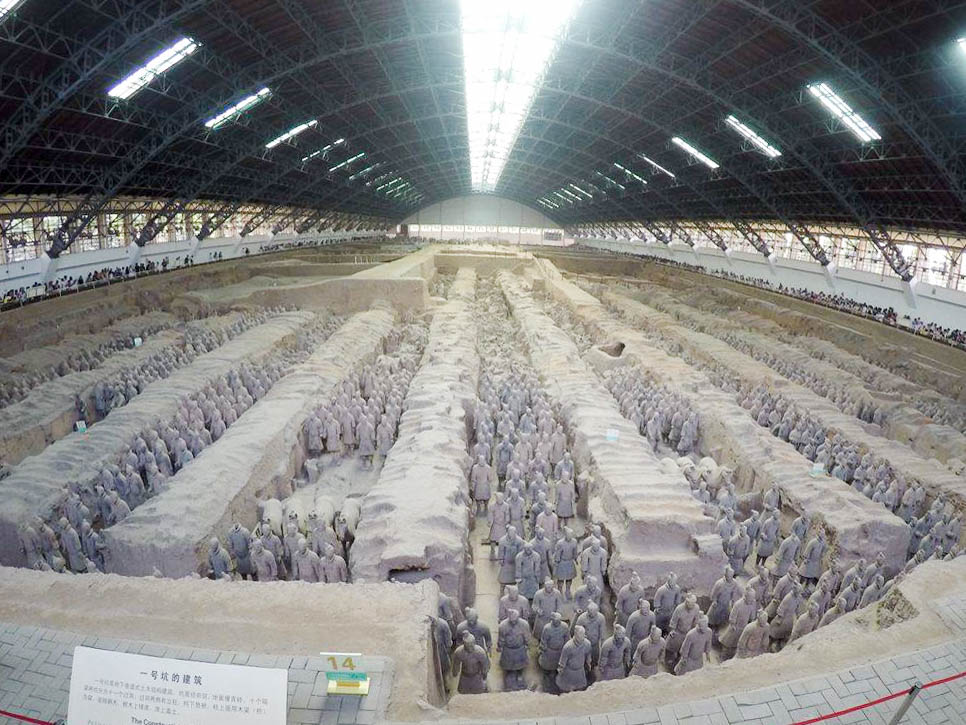 Of course, no list of the best things to do in Xi’an can be complete without the Terracotta Warriors! These take at least half a day to see and are an hour away by bus, but are so worth it. In 210 BC Emperor Qin commanded these warriors be built to protect him and guard him through to the afterlife. They weren’t discovered until 1976, and very soon after opened as a tourist attraction. Now, the marvel of the warriors is admired by millions of visitors every year. 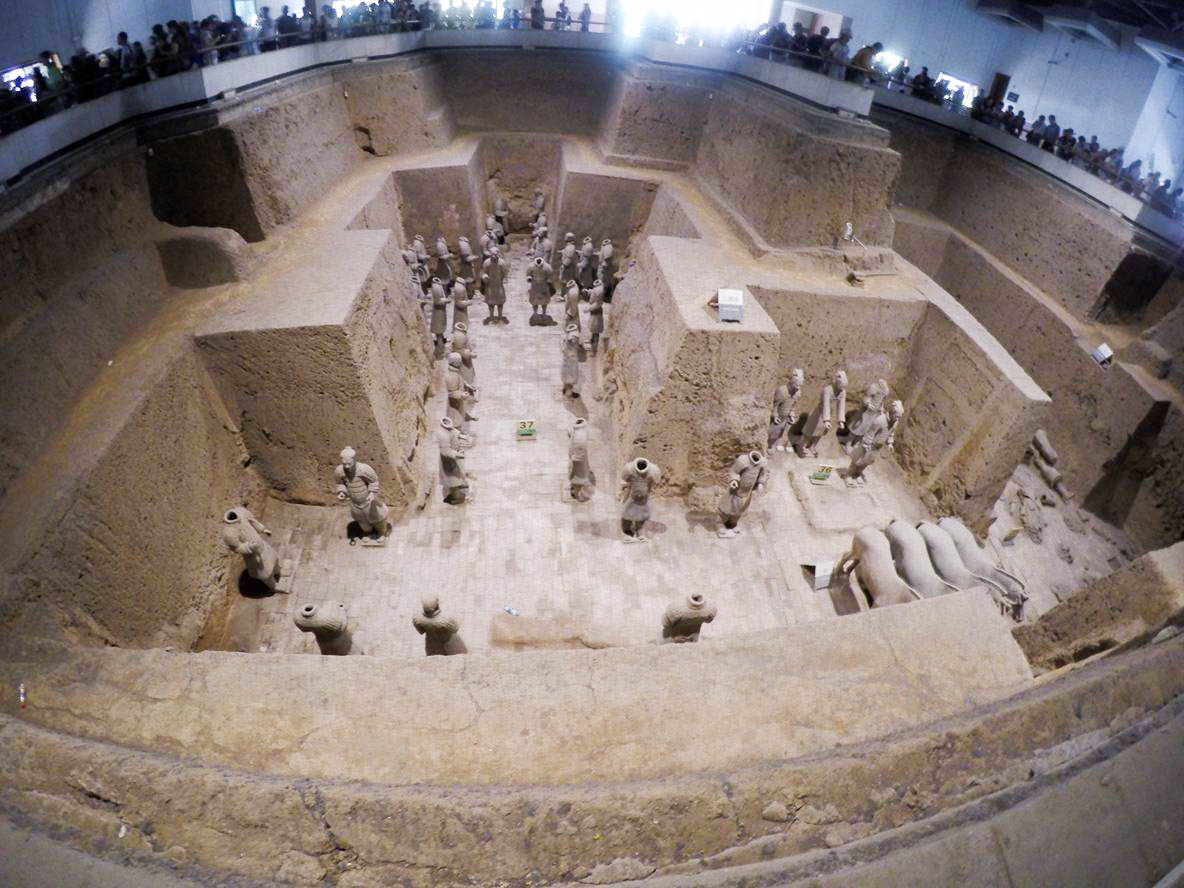 There’s three pits of warriors, and make sure you leave pit one until last – it’s by far the most impressive! In pit two, there’s the opportunity to look at some figures close up and if you want to have your photo taken with some mock warriors, the chance is yours for 10 yuan in pit three. (I just went for the incredibly sweaty selfie.)

The Closeness to the Mountains 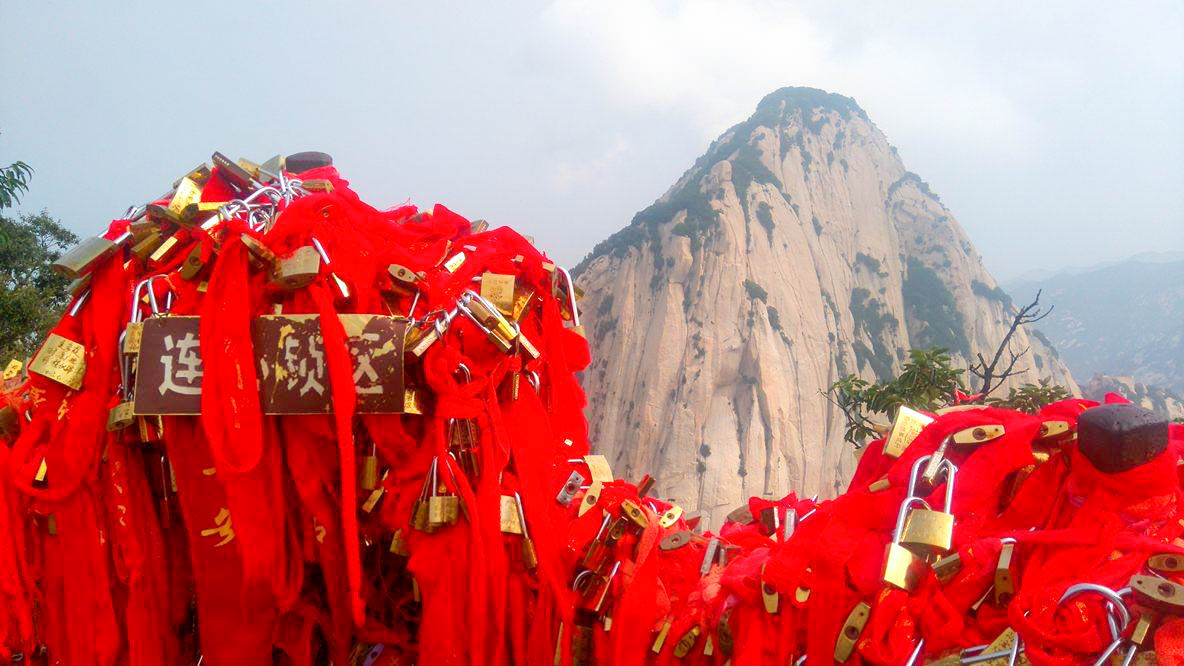 Xi’an is just a two hour drive away from some of China’s best mountains. Mount Huashan actually has a name for being a bit of a rouge climb, but I found it didn’t quite live up to this reputation. There’s a few challenging stairs-which-are-more-like-ladders to ascend, and you do have to watch your foot in places, but apart from that the mountain is fine. There’s the option to do a ‘plank walk’, which I missed out on (just because of the really long queue, I swear…) but it’s easy to avoid danger on Huashan if you don’t want to find it.

But the reputation that Huashan did live up to was its beauty. The views are incredible and like no mountain I’ve ever seen, and the pathway is constantly adorned with beautiful padlocks and red ribbon. It was an absolutely charming place to walk around, and it was great to find this spot so close to Xi’an.

Read More- Is Huashan the most dangerous mountain in China?


How to get to Xi’an

Xi’an is the perfect break from the madness of cities like Beijing and Shanghai, and so far, it’s my favourite Chinese city. Therefore, I can answer your question ‘is Xi’an worth visiting’? with a resounding yes. If you’re taking a trip to China, make sure you don’t miss Xi’an!

Have you been to a city that pleasantly surprised you?  Tell me about it in the comments! 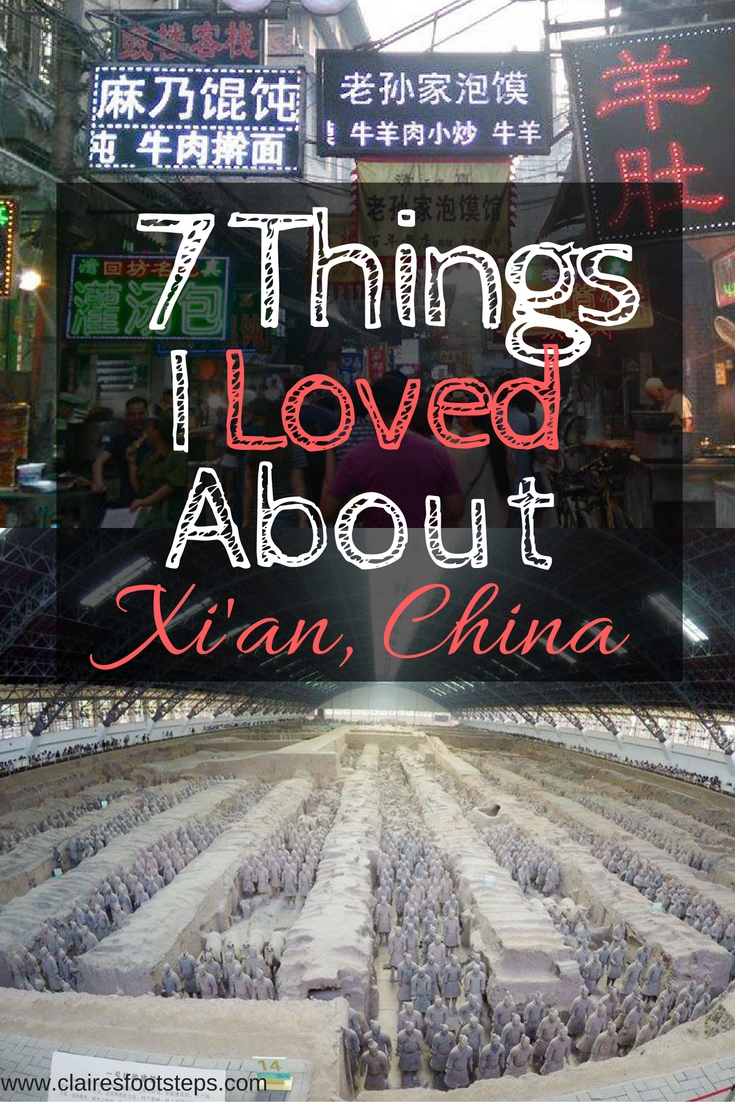 Are you planning a trip to China? Check out my other posts about the country!

Visiting Jiuzhaigou: A Magical Valley on the Edge of the Himalayas

Is the Chengdu Panda Centre Ethical?

Camping on the Great Wall of China

Why We Should Visit Non Touristy Cities in China

20 thoughts on “Is Xi’an Worth Visiting?”