When it comes to thrill-seeking and risk-taking, I either charge in all guns blazing or I’m as paranoid as hell.

And when I got to Beijing and was planning out my China trip, apparently my guns were blazing. I  chatted to some people who had been travelling around China for a while, deemed that I had booked one too many days in Xi’an (which actually wasn’t the case at all – I loved Xi’an and could have spent much more time there), and decided to take a day trip from the city on my third day in the region.

After researching mountains near Xi’an, I decided to hike Mount Huashan, apparently the most dangerous mountain in China*. 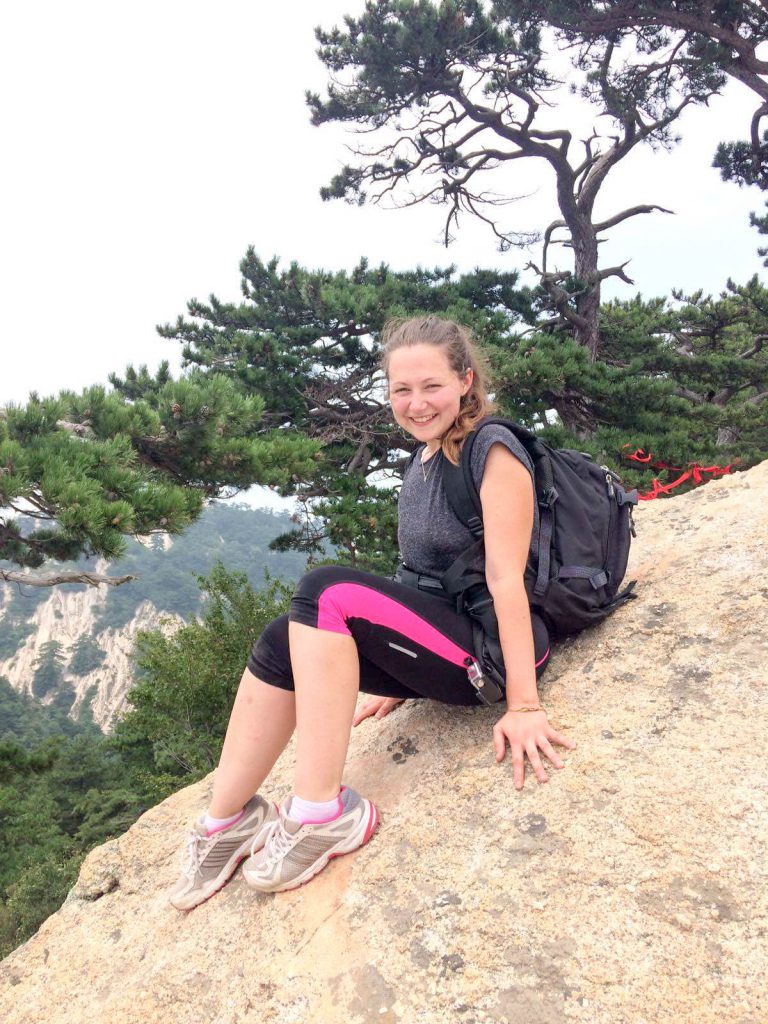 Moreover, most Huashan guides advised two or three days to conquer the mountain. I did want to spend some time in Xi’an, and could only give myself a day to hike Huashan.

Is a day enough time to hike Huashan, the most dangerous mountain in China?

I wasn’t sure, but there was only one way to find out.

*I’m not sure where this title comes from, I have just been told by various people that Huashan is a very dangerous place to hike. I’m pretty sure that K2 is probably tougher, but maybe the title means most dangerous accessible mountain?

Getting from Xi’an to Huashan

Getting a bus from Xi’an to Huashan is relatively straightforward. Buses leave from the main bus station (which is in front of Xi’an station). There is a sign by the stop that the bus leaves from, or ask any of the drivers. The buses start at 6:30am. If you’re doing Huashan in a day, be on the first bus!

The bus will drop you in Huashan Village. You can hike up to the North Peak from here, but it will take about five hours. If you’re in Huashan for a longer stay, then this is highly recommended, but if you’re only there for a day then it’s impossible. Take a taxi to the ticket office, then a shuttle bus to the North cable car. Taxi should cost 10 yuan.

The cable car drops you off very near the North Peak, where you can have a mini celebration before you’ve even done any walking… well it’s a pretty good job to have made it up the mountain, right? 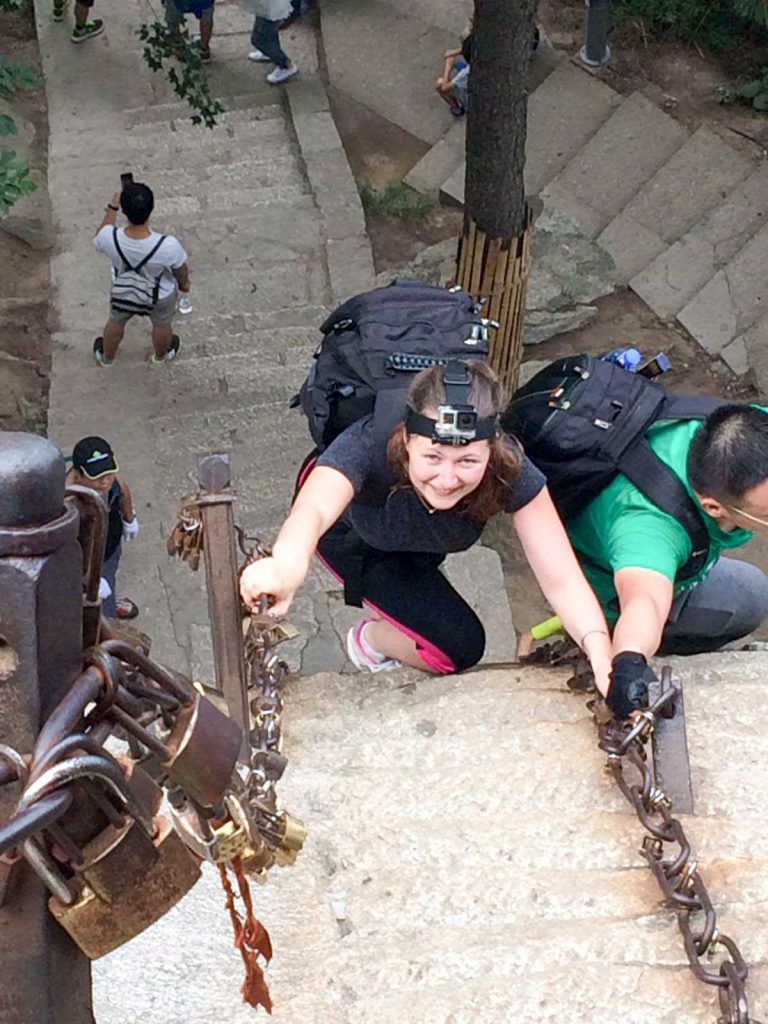 Before I answer this question, let me contextualise. I am clumsy. When I travel, things often go wrong. If there’s a branch to trip up or a hole to fall in, don’t worry, I’ll find it. Yet I’m here, having hiked Huashan a week ago, and I’m alive, in one complete piece. 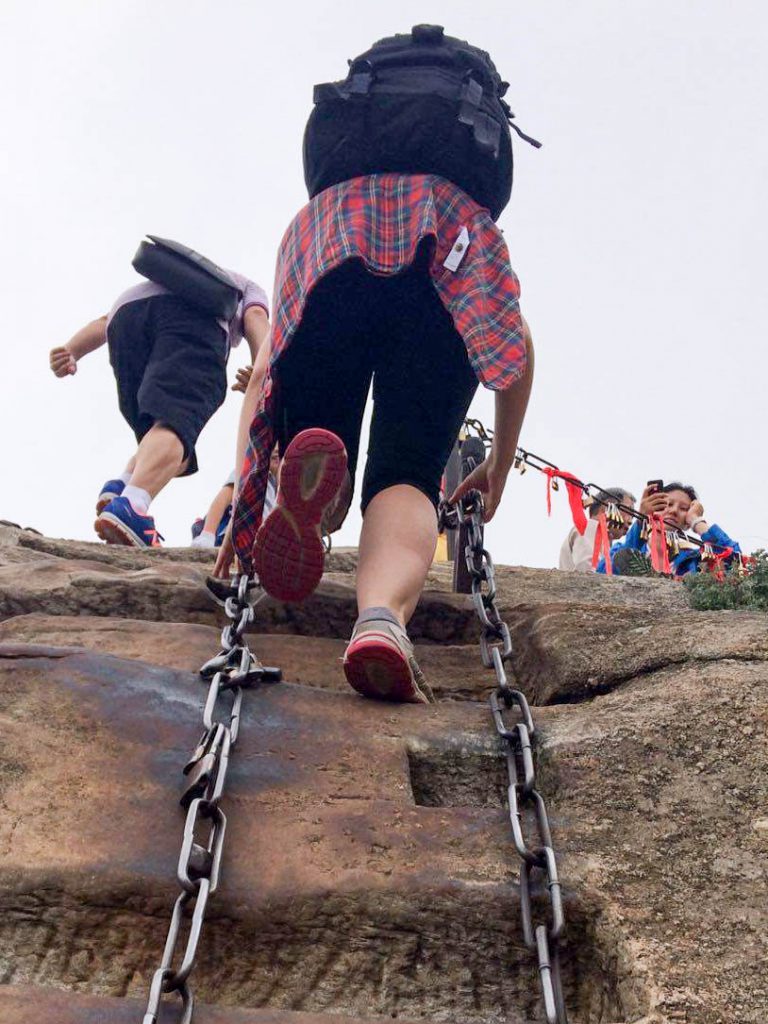 Some parts of Mount Huashan were basically vertical with very little foot space. I had to stand on these sideways and haul myself onto the next one using the metal chains which are either side of the stairs/ ladder. Sometimes I’d just be hanging with nearly all my weight on my hands, knowing that a wrong footstep could send me tumbling to the bottom.

But the important thing is, I didn’t! I made it to the top of every stair/ ladder, slightly bruised but otherwise injury-free. If you focus on the task in hand (and slightly on what funny footage your GoPro must be filming… that’s what I did at least!) then you’ll be just fine!

Then there’s  the fun looking extra, the ‘Plank Walk’. Now, I was absolutely devastated that I the queue was too long and we didn’t have time to do this if we wanted to get back for the return bus to Xi’an. Honestly, I was uncontrollably excited about the prospect of standing on 20 centimetres of wood while otherwise being suspended 2000 metres in the air, and it broke my heart that we just didn’t get the chance to do it if we wanted to hike Huashan in a day. (I’m not being sarcastic at all, promise 😉 ). I’ve heard that the Plank Walk definitely adds to the ‘danger factor’ of Huashan, but I’ve met lots of people who’ve done it and lived to tell the tale.

If you really don’t fancy hanging off the edge of a cliff with only a questionable harness supporting you, you can always get a fake picture of you standing on the ledge on one tiptoe. For a pretty large fee the the guys with a green screen will gladly impose an image of you doing a daredevil pose onto the background of the Plank Walk… only in China eh?

Hiking Huashan in a Day

I did it, no problem, but if you have the time I would recommend taking two or three days to hike Huashan, so you can do everything (including the Plank Walk that I was so disappointed to have missed out on). Two days should be enough to climb up the mountain, walk around at a leisurely pace and hike back down.

But if you’re pushed for time, hiking Huashan in a day is completely possible! As I previously mentioned, it’s best to get the first bus from Xi’an. Once you’ve got the cable car up to the North Peak, it’s time to tackle the other three peaks. South Peak, West Peak and East Peak are all a fair hike (and a lot of stairs) from North Peak. On the way there’s Taoist Temples to admire, spectacular views to marvel at and (of course) some stair/ladders to tackle!

The peaks are well signposted and it is relatively easy to navigate the mountain top of Huashan. Guide books reckon it takes 3-5 hours to walk all the peaks – which I think is very ambitious. It took us about 6, walking at a reasonable pace with only a few stops.  If you’re hiking Huashan in one day, just be slightly wary of time – the cable car often has a large queue and the last bus back to Xi’an (remember that you’ll have to get a shuttle and then a taxi at the other end!) leaves at 7pm.

Most importantly, have faith that you can conquer Huashan. If I, a serious contender for the clumsiest girl in the world, managed to do it, you can too!

What’s the most dangerous thing you’ve ever done? Tell me in the comments!