There’s loads of fantastic things to do in China. Whether you desire exploring the Temple of Heaven in Beijing, admiring the Bund of Shanghai, climbing the Great Wall or traversing the rice paddies in the South, you’re sure to tick off a few bucket list items in this country. But what about visiting one of the non touristy cities in China? Here you can really experience China like a local and enjoy an experience not many travellers have. And they’re a lot more accessible than you think! Here’s some great reasons to visit a non touristy Chinese city.

I’ve been thinking about making a trip to China for the last few years; and this year I decided it was time to stop thinking about it and actually do it. My stepmum is from a non touristy city in China called Liaoyuan, and my family visit every year. With my move to Australia on the horizon, I decided that now was the perfect chance to visit Liaoyuan and explore China.

I’m travelling solo for a fair bit of my China trip; but I joined my dad, stepmum and her family on their holiday to Chengdu and Jiuzhaigou, and then spent a week in Liaoyuan. 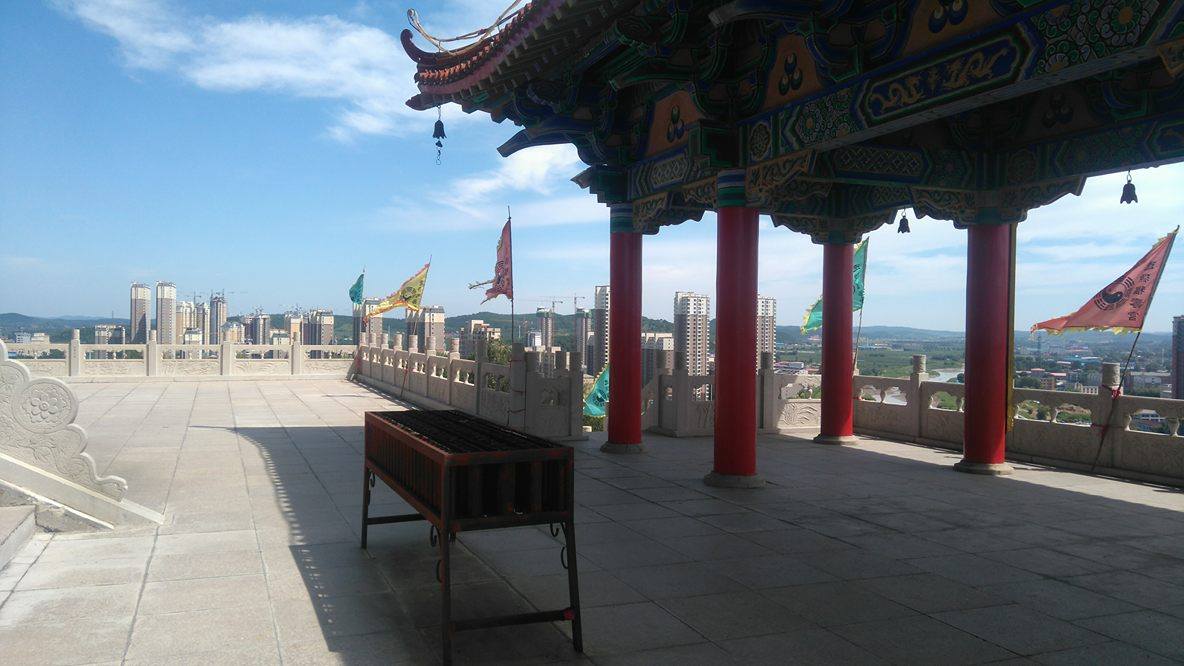 Liaoyuan sees virtually zero Western tourists – it’s highly likely that me and my dad were the only Western visitors this year. It is is a tiny city by Chinese standards, but is about the same size as Bristol, the eighth biggest city in the UK. Located in North East China in the Jilin province, Liaoyuan is a 13 hour train ride from Beijing.

I had a really great time exploring Liaoyuan and experiencing local Chinese life. Although my Chinese is not quite up to scratch (meaning: I can say hello, thankyou, sorry, the numbers 1-10 and the extremely useful phrase ‘this is my foot’) the locals were friendly and helpful. A smile goes a long way in these remote Chinese cities!

Due to Liaoyuan’s difficulty to reach, I’m not suggesting that everyone visit (although if you do fancy it, let me know and I can definitely give some city-specific advice). I’m using Liaoyuan as a template for any of the average, small, non touristy Chinese cities. The atmosphere in these cities is completely different to what you might encounter in Beijing, Chengdu, or Shanghai; it’s an entirely alternative experience to the big, tourist-trodden cities of China. Here you can really witness authentic China and live the local life. 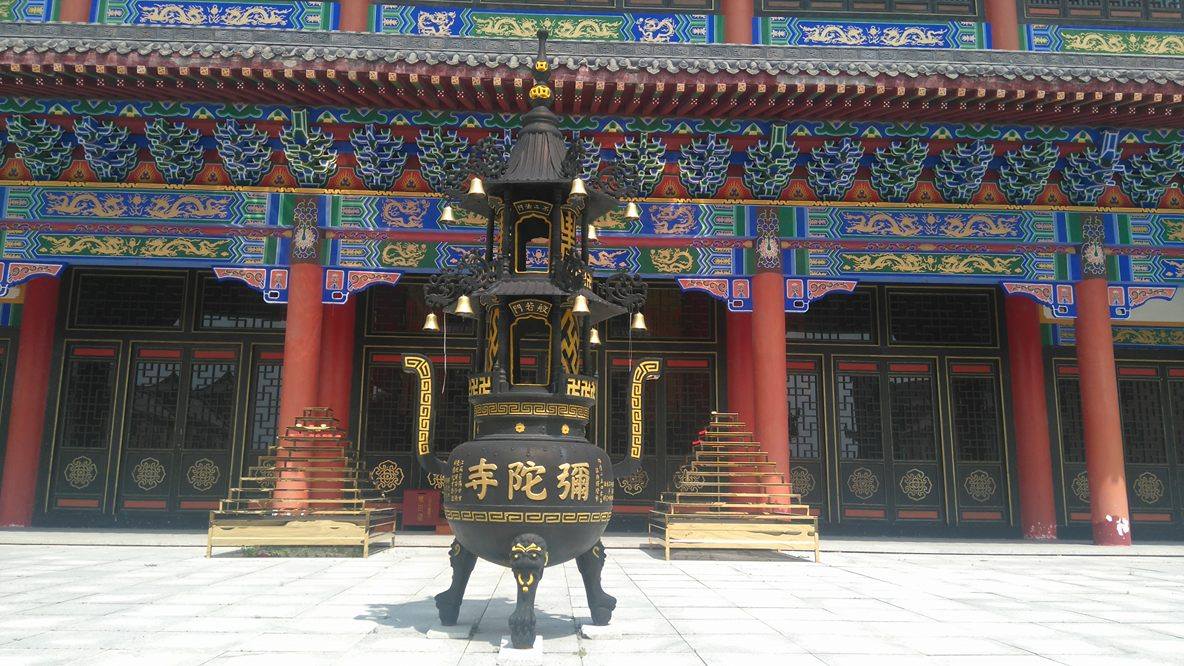 There’s Still Beautiful Temples – Which Are Cheaper to Visit and Much Quieter! 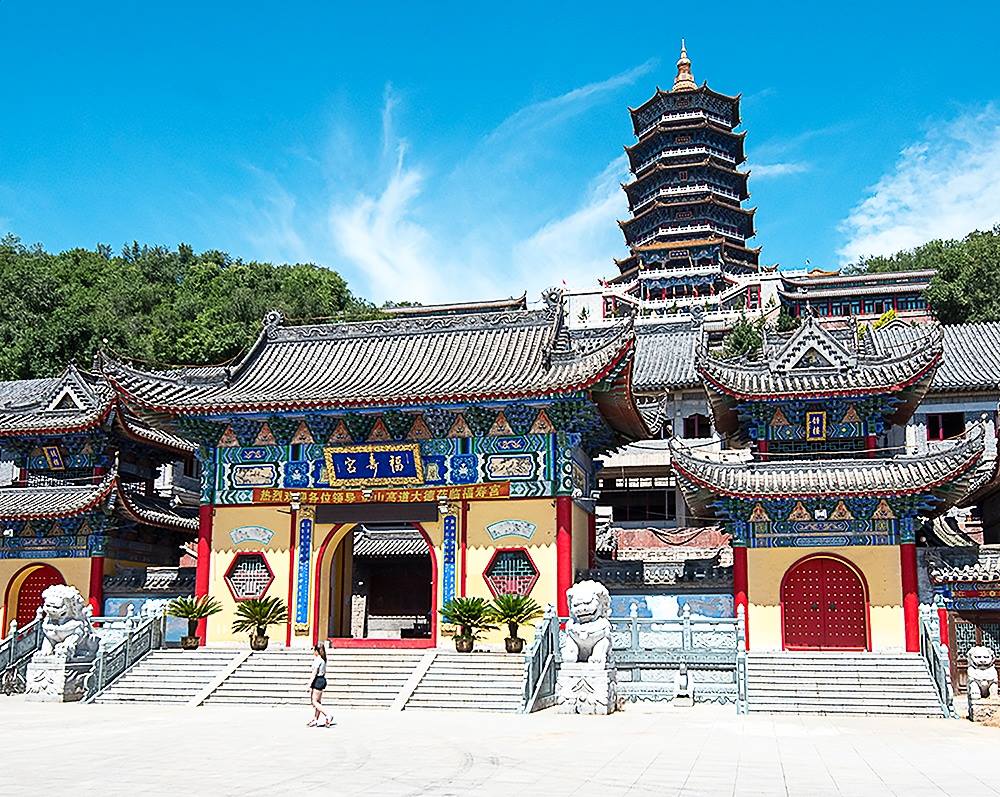 Liaoyuan boasts a beautiful Taoist temple, with a marvel of a pagoda sitting on top of a hill. You can go right to the top of the pagoda, admiring how each level boasts a different Taoist God. The most notable of these is the God of Education- where students might pray to if they are trying to pass an exam. The architecture is intricate and beautiful; it is remarkable how much meticulous care is put into these local temples.

Liaoyuan also contains a Buddhist temple. Both an outside standing Buddha and inside seated Buddha reside here; and the inside (we got a special tour from one of the monks that lives there!) showcases an impressive array of carvings telling stories of Buddhist figures. 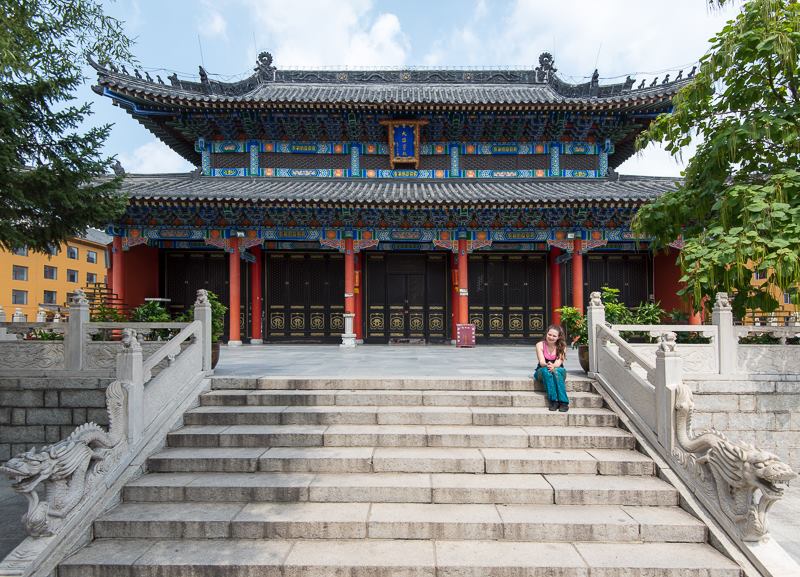 A lot of less explored cities of China contain these beautiful temples and pagodas, and if you don’t visit on a religious day, you’re very likely to be one of the only people there. The Taoist temple in Liaoyuan cost 30 yuan to visit and the Buddhist temple was free; which was a lot cheaper than many of the crowd-filled temples of Beijing! 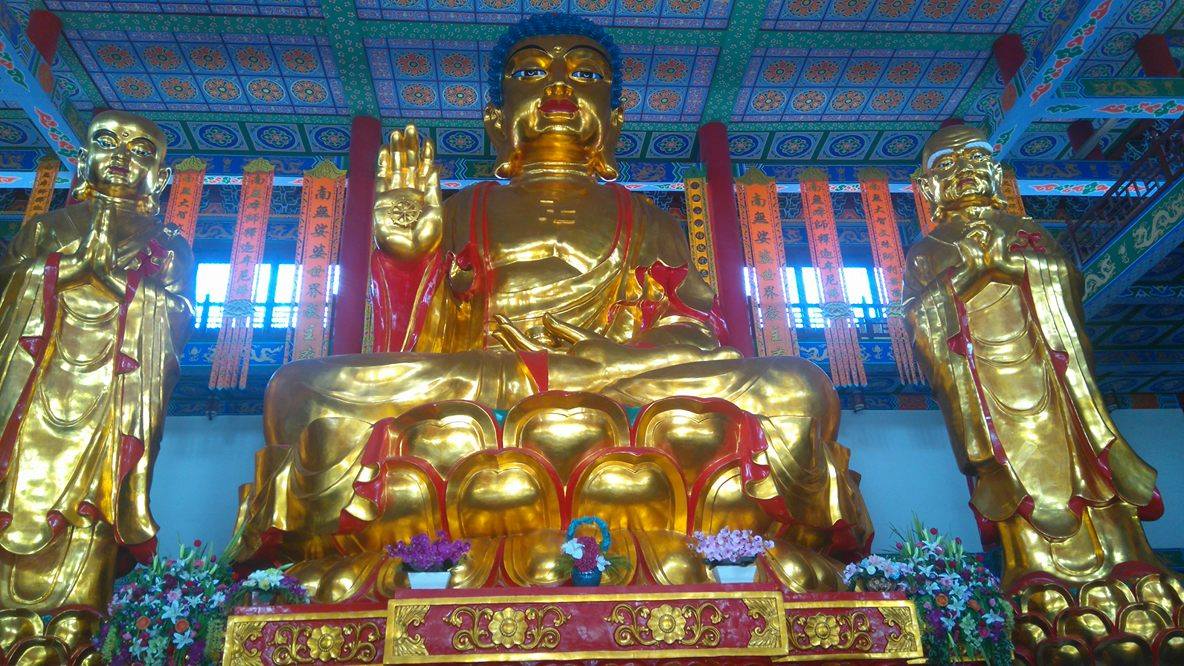 There’s Chances to Learn About the Local History 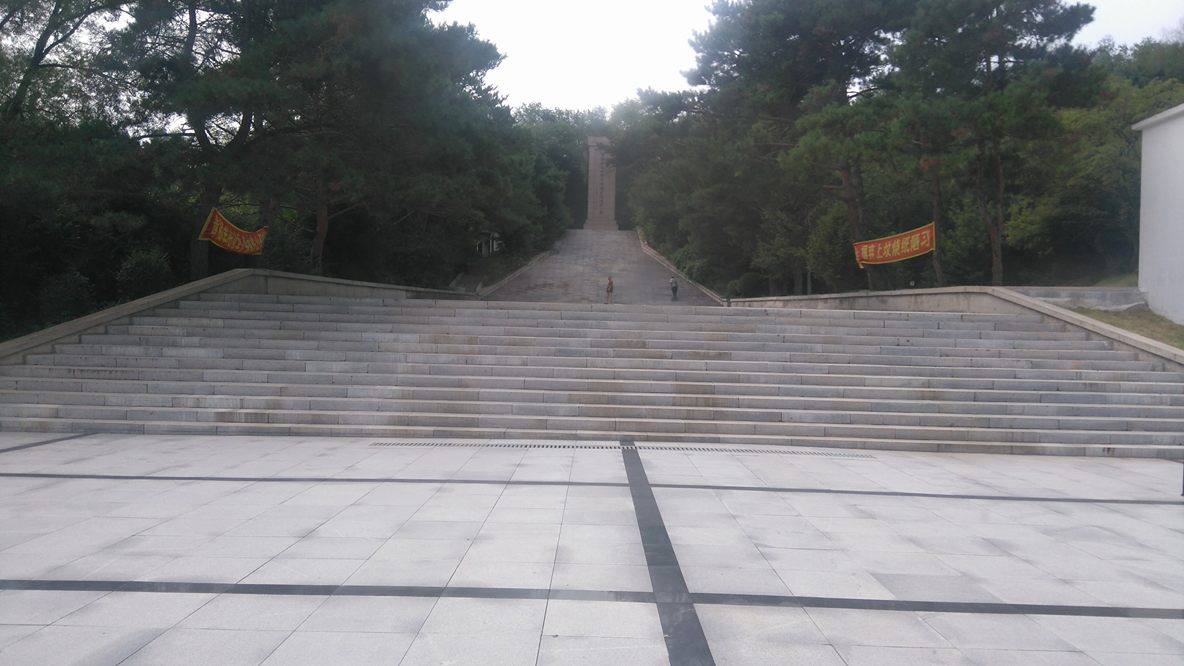 China has one of the most intriguing histories of any country, and I think it is baffling how this is relatively unexplored by Western education systems. The building of the Great Wall, the enormity of the Forbidden City and the use of Tiananmen Square by Mao all fascinated me while I was in Beijing.

But Liaoyuan showcases a sombre side of Chinese history. During WW2, Japanese troops occupied this area of China and inflicted a reign of terror on the people. Liaoyuan was exploited for its richness in coal, and the men of the city and surrounding areas were forced into mining labour. The conditions they worked in were squalid and they basically slaved until they died. When they did die, their bodies were thrown into a mass grave. Alongside a museum depicting what happened in Liaoyuan in 1931-1945, the mass grave has now been opened, and visitors to the museum can feel the enormity of what happened as they gaze through glass at the hundreds of skeletons from the men who were killed under this regime. 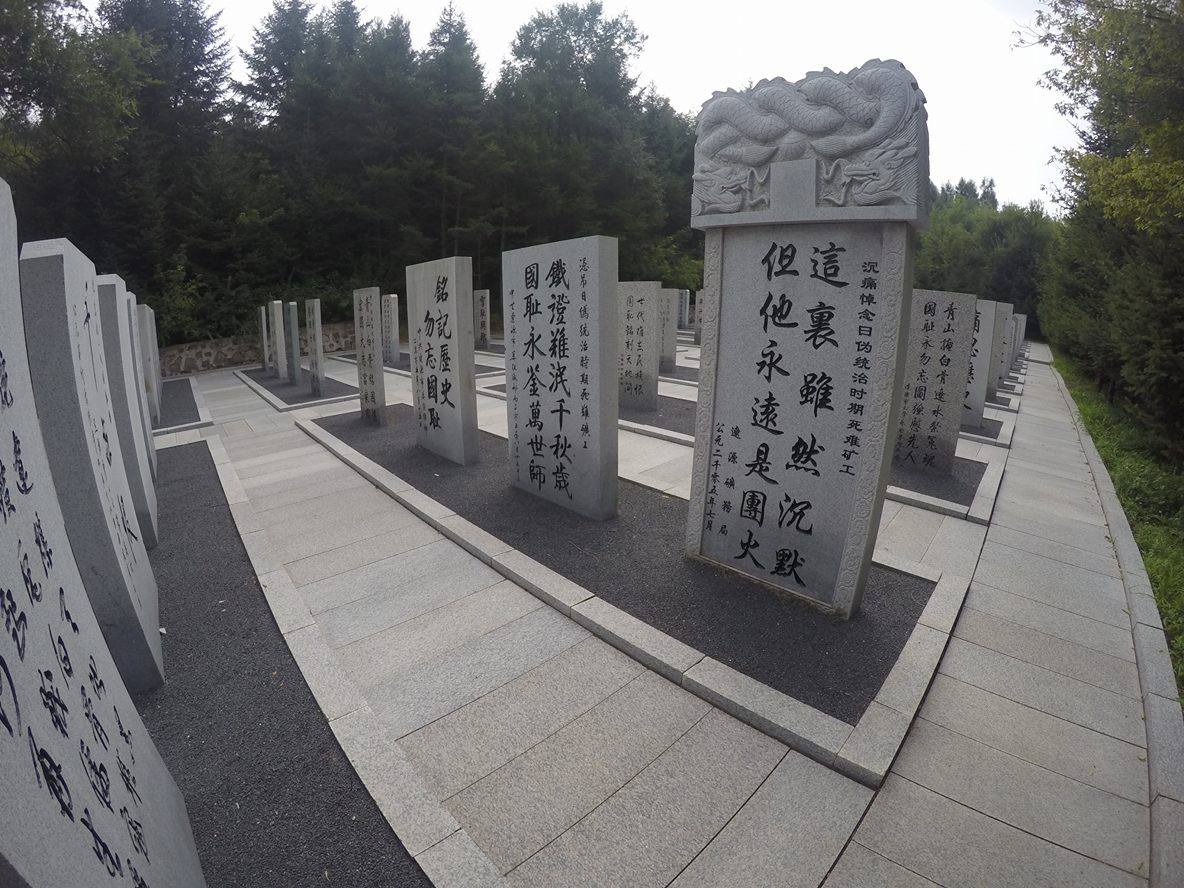 As I walked around the museum, what shocked me was that the Western world just doesn’t know about this. Even a lot of Westerners who visit China won’t know about this. I’ve always maintained that I think places like this are so vital for education, so people can realise the enormity of the tragedy and try and prevent terrors like this happening again in the future, and this was relayed to me again as I visited the mining museum.

Travel to the less explored cities of China to learn about the parts of history that Western culture misses out.

Food is Local, Cheap and Delicious! 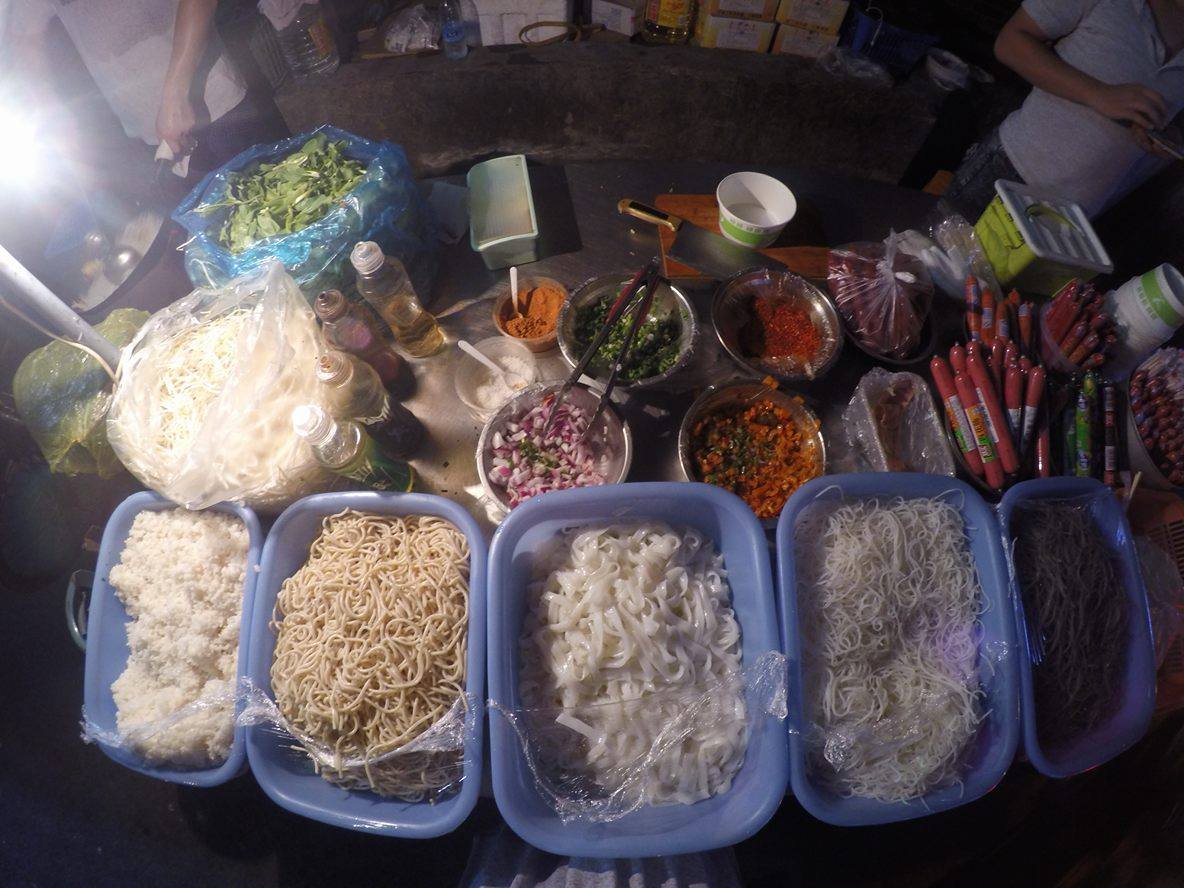 Less touristy places in China are a great place to shop and eat local. Although less touristy China isn’t amazing for vegetarian options, and if you aren’t with someone who speaks Chinese you might end up with liver instead of aubergine (this happened to me….), the food is generally absolutely delicious and a great deal cheaper than in other cities!

In Liaoyuan, we had barbecued food quite a lot, which seems to be a bit of a local speciality. The spices that they put on vegetables and potatoes are delicious and make for a filling dinner. Noodle soups are widely available (you can even get them delivered!) and dumplings, a speciality of North China, are served in many shops. They do these with all sorts of different fillings; a great veggie option is mushroom.

If you’re a meat fan, North China is famed for its BBQ chicken wings, BBQ meat skewers and meaty dumplings. If you’re visiting a different less explored Chinese city, the food will be slightly different but always local. Being a vegetarian or vegan in China is slightly harder outside of the tourist areas, but more or less can be done. And it will always be at cheaper prices than Beijing or Shanghai!

The City Comes Alive at Night 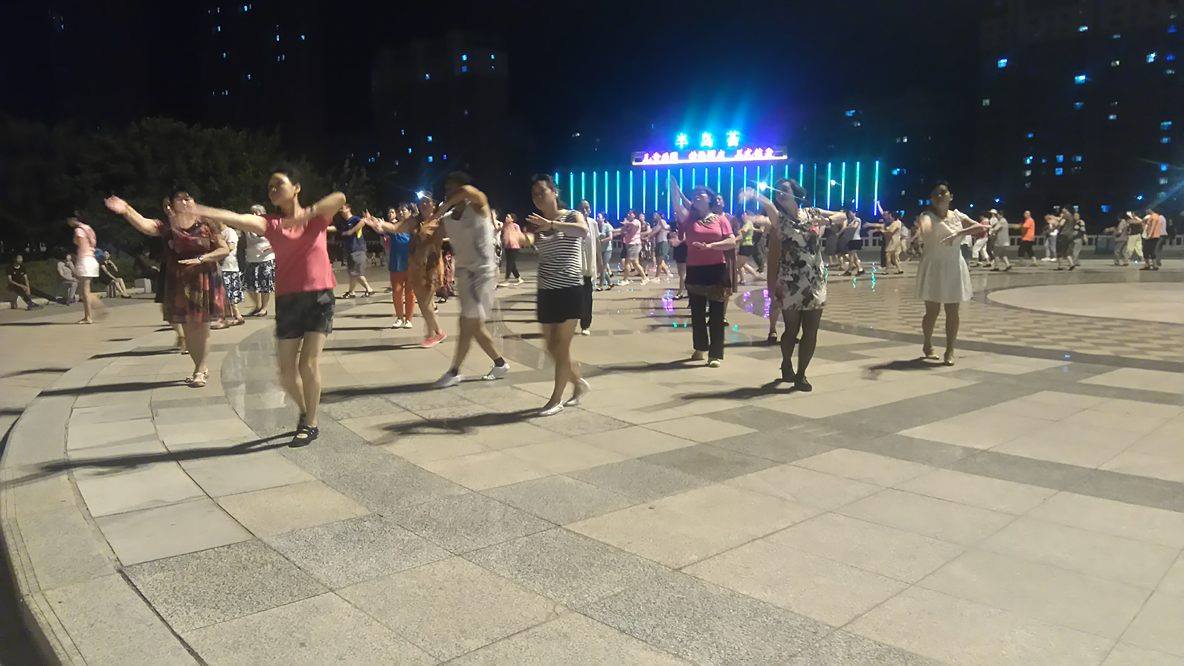 Liaoyuan and the less explored cities of China come alive at night in a very unique way. Unlike a lot of Western towns there’s not much drinking, but the People’s Park basically turns into a funfair,  and adults dance by the river every night.

The Peoples Park contains makeshift games, wacky vehicles for kids to ride in (I saw one that was made to look like a giant open mouth, and another with Snow White AND two Power Rangers on the back, for kids who just can’t chose) and stalls selling popped corn and other fairground street foods. In one corner, there is a performance of someone singing, which gathers crowds of people. 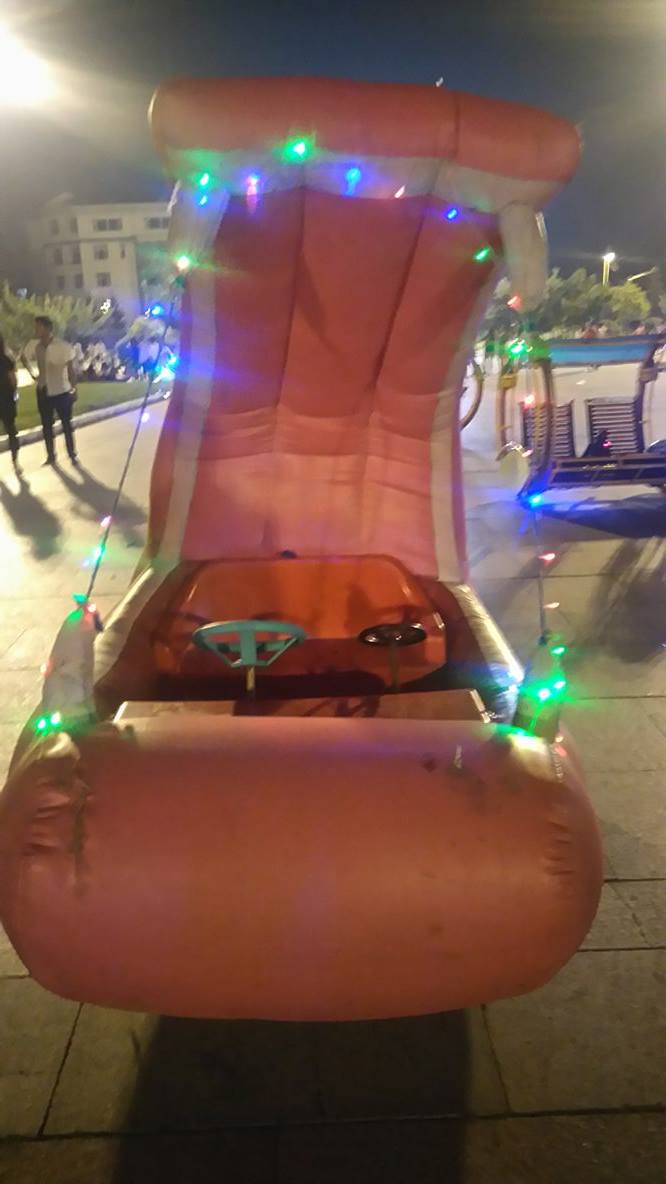 The dancing was one of the most intriguing and uplifting things that I have seen in China so far. People from all walks of life; old and young, male and female, get together to perform this routine. There didn’t really seem to be anyone leading the pack, so I gathered it was pre-rehearsed. It just gave off such a lovely sense of community and togetherness that I have never seen anywhere else.

Even people who don’t join in the dancing or the funfair still walk around and engage in the community atmosphere. You won’t see this in Tiananmen Square in Beijing or The Bund in Shanghai, but it is commonplace in other smaller cities in China. 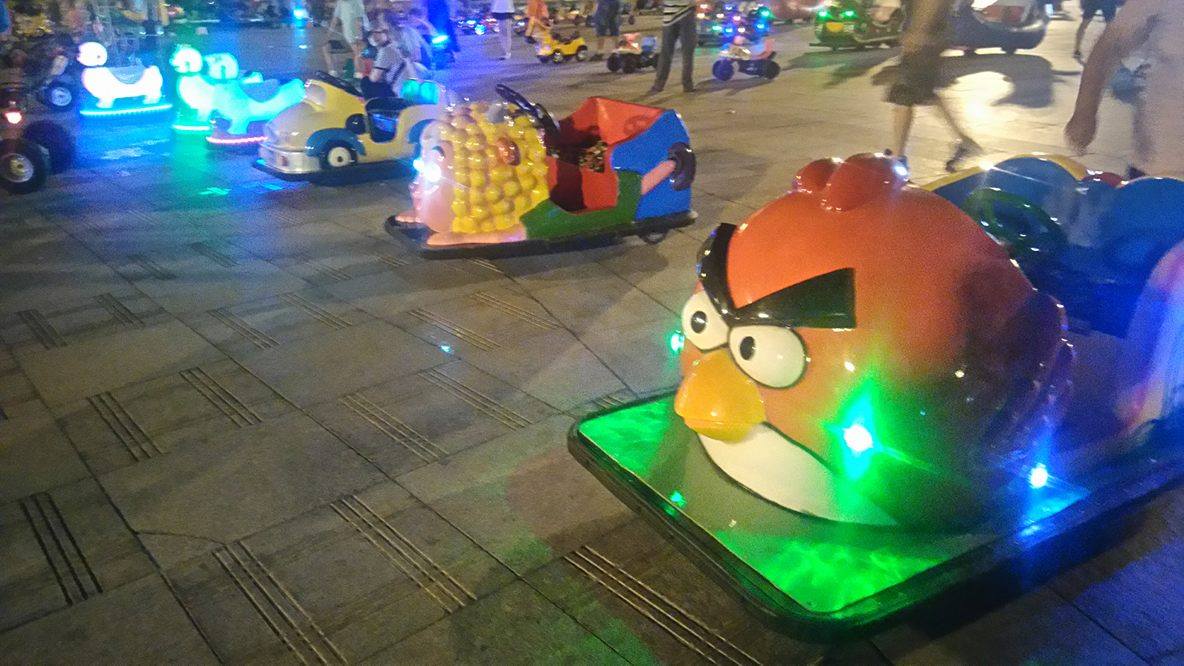 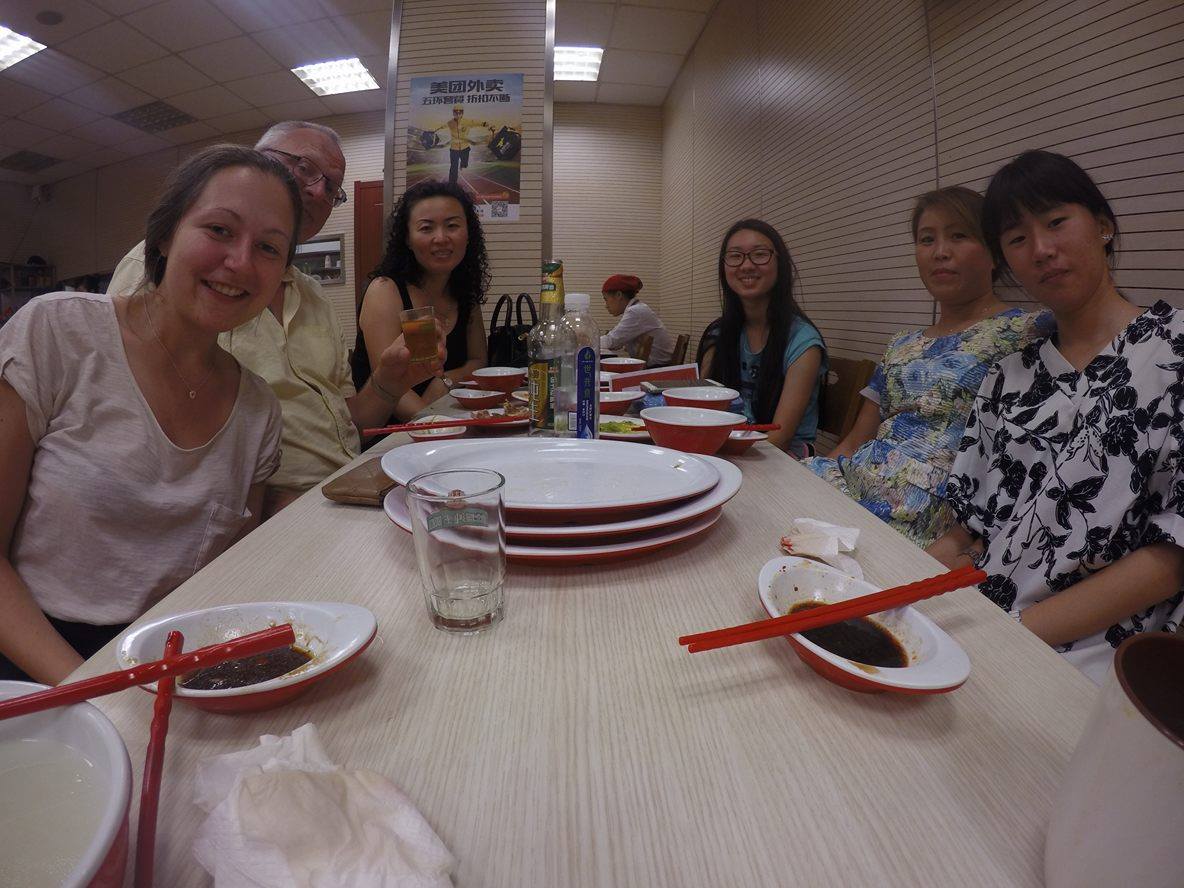 In the more touristy cities in China, you’ll be able to admire the architecture, involve yourself in some Chinese food and learn a little about the cities’ history. But it’s less likely that you’ll be able to really get to the root of the city.

I like to think that I already knew this, but going to one of the less explored cities in China helps you understand the country in a completely different dimension than if you just stick to the touristy areas. You begin to really be able to fathom how the country works, and start to appreciate its importance in the world today. 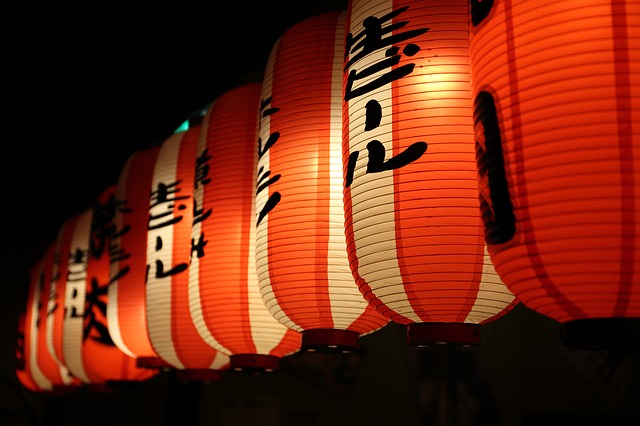 It’s completely humbling to go to a city where almost nobody speaks your language. To have to get by on the limited Chinese you know (which is spoken so terribly that nobody probably understands anyway) and hand gestures. To realise how many people there are in the world that don’t speak your language, and fathom the importance of understanding other cultures, traditions and ideas if you want to get to know the world as a whole.

For this reason alone, I think it’s so important to visit the less explored places of China. 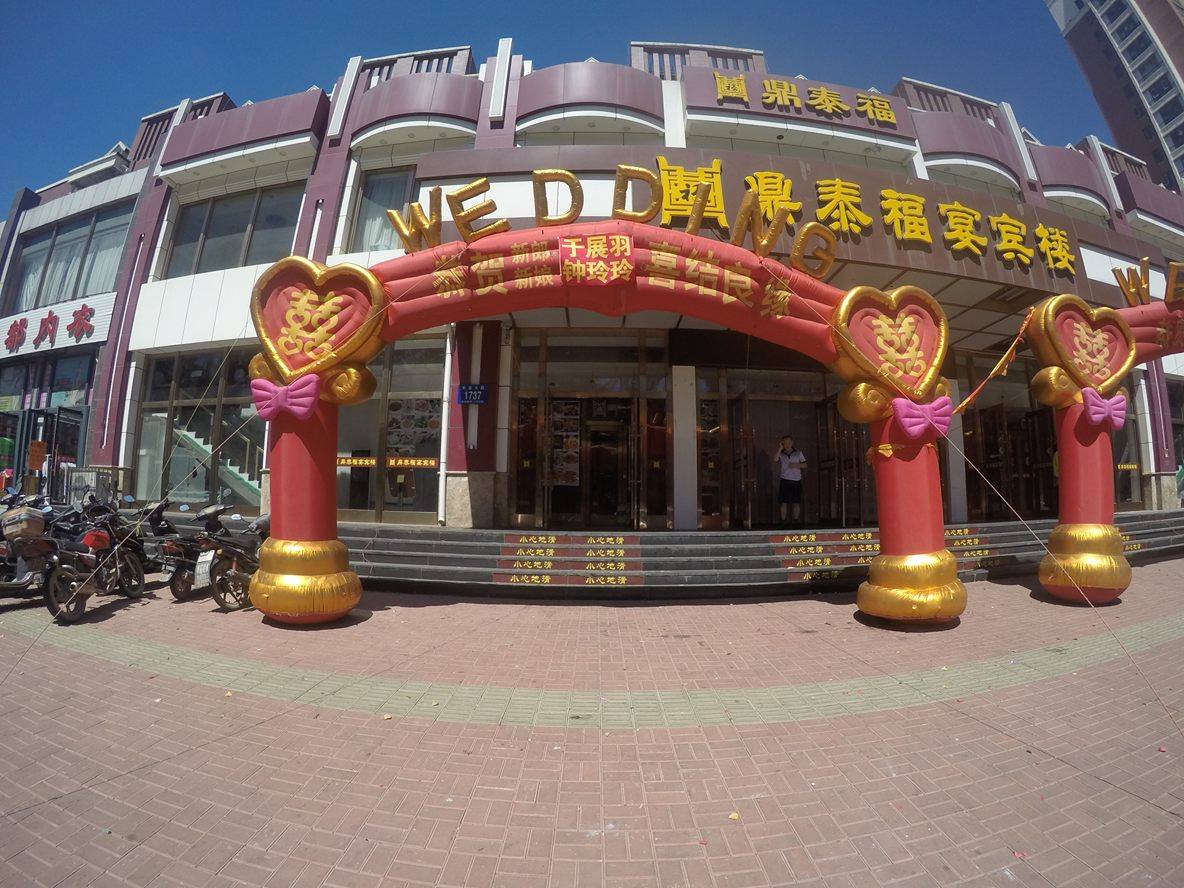 As I mentioned before; Liaoyuan is not normally the choice for travellers seeking a less explored city in China, purely because of the distance from Beijing (and further distance from any other big city!) But here’s some less explored Chinese cities that you could add to your Chinese itinerary, by getting a short train from another city:

Have you ever been to any less explored cities in China, or any remote areas of any other country? I’d love to hear about them! Tell me in the comments!

Here’s some more resources for planning your trip to China:

Is the Chengdu Panda Base Ethical?

Visiting Jiuzhaigou: A Magical Valley on the Edge of the Himalayas

Camping on the Great Wall of China 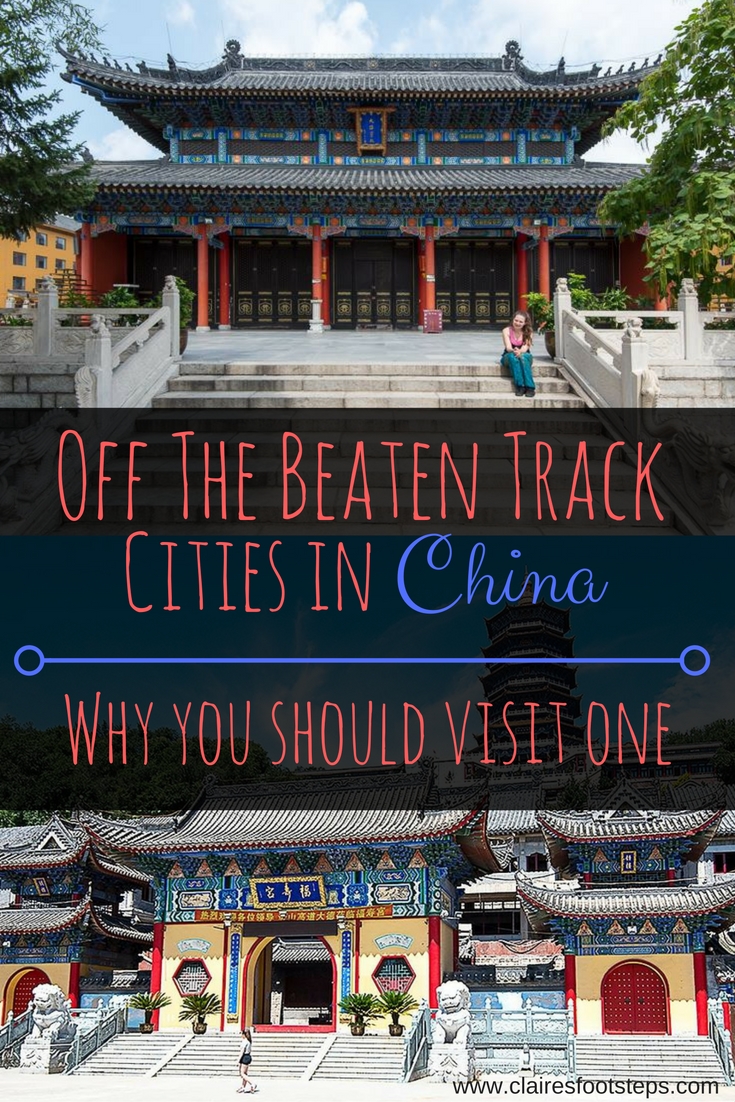