China is a fantastic place for more adventurous travellers.

There’s no specific tourist path through the country, no shuttles transporting people to each destination, and very few bars and restaurants catered especially for backpackers.

Because of all of this, China can seem a little daunting; and the question of how to get around is just one of the many challenges when planning a trip to China.

But, even though it looks daunting, train travel in China is fairly easy to get the hang of – plus it is a cheap and effective way to travel.

Granted, it takes a lot longer than flying, but the yuan saved makes it really worthwhile. Of course, train travel is always a lot more eco-friendly than short plane journeys which is another reason why I will always choose trains over planes when possible.

Personally, I’m a huge fan of the experience of train travel.

China offers some of the most stunning scenery I’ve ever seen and travelling by train allowed me to see this and make connections with other passengers on the train, be amazed at the train food provided, and experience a 42 sleeper train cabin.

Flights are the same anywhere in the world, but taking a Chinese train is a unique experience.And you know what? It’s possible, even if you’re solo travelling in China.

Taking a Chinese train by yourself, with little or no command of the language, is pretty daunting, and learning how to take it successfully is one of the best things to know before visiting China.

If you’re planning such a trip, read on for everything you need to know to reach your destination safely.

Buying Your Tickets for the Train in China

Buying tickets for a train in China doesn’t have to be hard.

I normally choose to buy them in advance – beds can sell out (you don’t want to do a 40 hour journey on a seat or with no seat, trust me) and it saves confusion at the station.

If you’ve bought your tickets in advance, you’ll need to collect them at a Chinese train station.

Many major train stations offer English-speaking booths – so head to one of those if you can.

You can also buy tickets at the station.

Here are some of the key phrases you might need when collecting your Chinese train ticket, written by my Chinese stepmum so I know they’re legit!

(From top to bottom – “Do you speak English?” “I want to pick up my train tickets” “this is my booking number”) 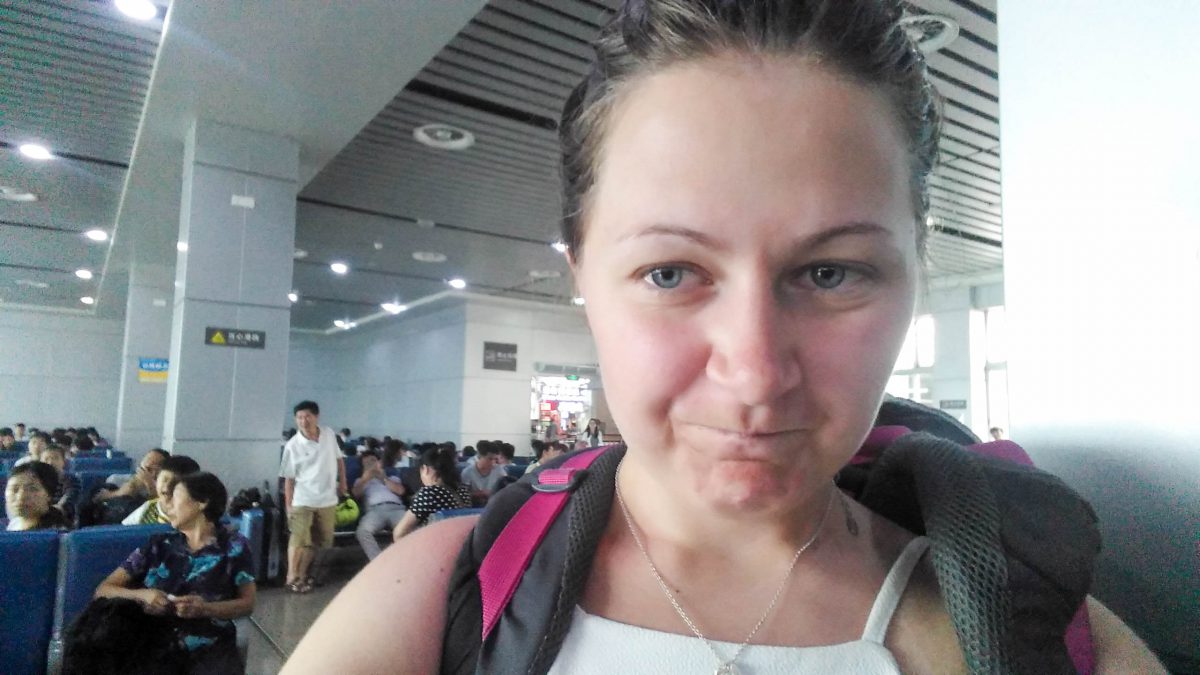 When you arrive at the station, take a glance at the screens displaying where each trains leave from.

“But it’s all completely in Chinese!” I hear you say.

No dramas, there are a couple of ways you can work out which train is yours and where to leave from.

Numbers in Chinese are the same, so take a look at what time your train leaves and try and match it to one of the numbers on the board.

Your train number should be a mix of numbers and letters in pinyin characters and that will also be displayed on the board.

So, although you won’t be able to read what is actually on the board, you’ll definitely be able to find the train number and time that match your ticket and from there work out the platform number… yippee!

That sorted, get to your gate at least 45 minutes before the train leaves, if not more.

Trains in China start boarding up to an hour before departing and have been known to finish boarding at completely random times.

You probably could still get on the train up to 10 minutes before departure, but nobody wants a panicked dash through a foreign station where they can’t communicate themselves to people around, do they?

When its time to board, join the crowd (there is no queue, just a hoard of people pushing to get through the gate) and if you want to get on the train quickly, remain defensive to people pushing in front.

But your seat will already be allocated, so if you’re not too bothered about where in the crowd you board the train, relax (as much as possible when taking the trains in China!) and follow the crowd until you get to the front.

Then you just need to give the ticket inspector your biggest grin and your ticket (the second item is more important than the first) and march confidently down to the platform.

Rest assured that even if you did read the board wrong (which you shouldn’t have with my foolproof technique), you’re in no danger of actually getting on the wrong train – the inspector will stop you here.

When the train arrives, you’ll want to find your carriage.

Now here’s another factor to why trains in China are as confusing as hell; all of the carriages are often mixed up. Carriage 4 might be next to carriage 10 which might come before carriage 7. No idea why.

There should be another inspector at the bottom of the stairs who, if you show your ticket to, will point you in the direction of your platform.

When the train actually arrives, if you don’t see your carriage straight away just show someone official your ticket again and they’ll be happy to point you in the right direction.

Weirdly, everyone else at the station always seems to know exactly what’s going on!

Trains in China normally stand at each station for at least 10 minutes, so you should have enough time to work out where you’re meant to be sitting and board your carriage. Just don’t dally around!

When you board the carriage, be sure to do my favourite trick when travelling on Chinese trains. Find the carriage assistant, and with a beaming smile and a ‘please help me’ look in your eyes hand them your ticket and make a huge fuss of which station you’re disembarking at.

They should get the message – you have no idea how you’re going to work out where you’ll get off the train and you need their help.

Every assistant I’ve met has been more than happy to help out.

When you get to your seat, say NiHao to your neighbours.

This is done out of politeness in China – and be prepared for them to be fascinated with you and if they know English, to want to have a jolly old chinwag.

For extra security, show them your ticket and point at the station you’ll be getting off at.

If you’re lucky, they might be disembarking at the same station – meaning that your train quest is easily resolved by just following them off.

If they are getting off the train after you, they’ll definitely want to help you out by letting you know when you should be getting off.

Once you’ve met your neighbours, settle in to your seat/ bed, relax and enjoy the ride!

You’ll need all of the stuff that you’d generally take on a long haul flight or long coach journey, like the Megabus from London to Amsterdam I took last year.

Food on Chinese trains isn’t too expensive but can also be bought for much cheaper in supermarkets.

You’ll also want some products to keep you clean and fresh for the amount of time you’ll be on a train.

Things I make sure to have when I board a train in China include:

Have you taken a train in China and have any more ideas? Let me know over on Facebook or in the comments section below!

After your stop, the ticket inspector will come around and take your ticket and replace it with a boarding card.

They will keep your ticket for the duration of the journey.

Train journeys in China are long. But for a lot of people, they’re everyday life. Servers come round with hot food every hour or so, where you have the chance to buy a meal that’s not noodles!

Lights out is at about 10pm and the carriages normally come back to life at about 6/7am. It’s tough if you want to sleep in – music starts playing as soon as people get up, but you can turn the stereo nearest you down if you don’t really want to listen to Chinese opera at half past six in the morning.

If your assigned seat is the bottom bunk, you may find that it turns into a sofa for other people in the day. This is just train etiquette and you can’t do much about it.

Finding Your Stop and Disembarking the Train

If you’re in a sleeper, just before your train stop a ticket inspector should come back around with your ticket. This should indicate that the next stop is yours.

However, I learned that this didn’t always mean that the very next stop was mine so it always helps to keep asking people around to make sure you disembark at the right stop.

If you don’t, ask around at any stop you feel might be yours. Unless it’s one of the lesser explored cities in China, other people should be getting off at it too.

I really can’t emphasise how friendly and helpful Chinese people are and many will be delighted to help you out.

If you want to be a little more independent, you can prepare by having a copy of your China itinerary.

This will brief you how many stops there are between your departure station and your destination and if you see a sign at any of the stopover stations, you’ll be able to match each station on the itinerary to the one that you’re at.

Signs at Chinese stations are sometimes difficult to see and comprehend, but having all of the names written down will give you the best chance of navigating your journey.

You can also, of course, keep your eye on GPS to see where exactly you are.

Guide to taking the train in China

There you have it, a (somewhat) foolproof way to train travel through China!

The trains in China are definitely an intimidating experience, but you’ll soon realise that while they’re complicated as heck, the sheer amount of people on them willing to help means that you’ll never be really lost.

As always, in China and other countries, hand gestures and a smile will take you a long long way.

Have you taken the trains through China, or any other country? Do you have any tips to share? Let me know in the comments below!

You know you want to pin me!

Disclaimer: some of these links are affiliate links. If you make a purchase through these, I receive a small commission at no extra charge to you. I only recommend products I use and endorse. This is just one of the ways I keep this site running and free to use!

8 thoughts on “A Complete Guide to Train Travel in China”