During my recent trip to Amsterdam, I spent about the same time on a megabus to and from the city as I did exploring it…. Despite being a megabus fan, and not wanting to fly that short a distance, I could have probably done with a little more time in Amsterdam itself. 48 hours in Amsterdam is long enough to get a taste for the city, but there’s lots more to explore on my return.

Amsterdam is a unique city, with lots of distinctive quirks; which makes it an integral part of many people’s Europe bucket lists. With canals, bikes, amazing architecture and an intriguing history, it’s a great place for all travellers; one of the most romantic places in Europe, perfect for those backpacking solo, and groups of friends. There’s loads to do in the city, and also plenty of day trips from Amsterdam! So many travellers flock to Amsterdam for very good reason!

We did manage to cram in quite a lot into those two days, however. It was full with canals, parks and chips and mayo. The sun even made a guest appearance!

Amsterdam isn’t the cheapest city, and we were trying to save euros wherever possible. Lots of these activities/ eats were free or cheap, so I’d definitely recommend checking these out if you’re visiting Amsterdam on a budget.

Here are my top things to do if you’ve only got 24 hours in Amsterdam (and are pushed for money!).

Things to see and do 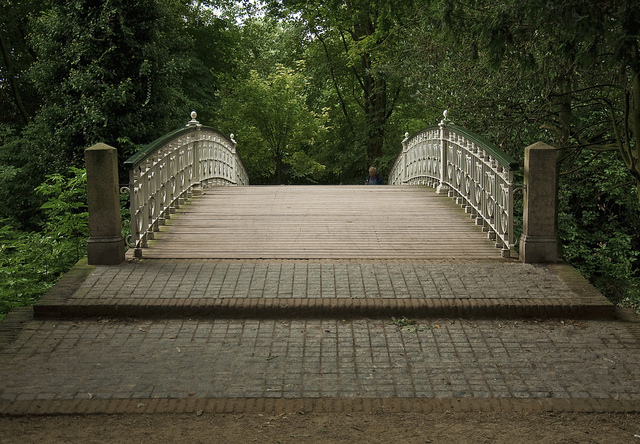 I love green spaces in cities. Central Park in NYC, Hyde Park in London etc. are all calm oasis’ in bustling metropolises. Amsterdam isn’t quite as busy as these capitals, but Vondelpark is gloriously scenic and well worth taking a time out while exploring the city. You can even rent a bike to ride around, which was highly recommended by some of my friends!

There’s not that many iconic ‘must-sees’ in Amsterdam, and it’s slightly unfair on Europe’s ancient structures to put them on the same level as a marketing campaign. But the IAMSTERDAM sign is pretty cool. It was derived as a campaign for the Amsterdam Area, to promote tourism in the city. It’s now made its way into the vocabulary of locals and visitors alike, who feel the vigour of the city so strongly that they are it.

There are actually three IAMSTERDAM signs. Check them out behind the Rijksmuseum, at the airport and try and catch the third sign, which constantly moves around the city! It’s one to get to out of peak hours, so you can catch the best snaps!

Check out this article if you’re searching for some more free things to do in Amsterdam in the summer.

Get Lost in the Canals

Nowhere does canals like Amsterdam – with even Venice having less than the Dutch city, they’re definitely one of the best things to do in Amsterdam. Pick a canal, and wander along it, admiring the boats lining the sides and the fringe of tall narrow buildings around it. It’s really scenic and makes for lots of stunning photo opportunities!

One thing that we didn’t have time for, but that I would have really liked to do is take a boat trip up one of the canals. They’re not too expensive (just under 10 euros) and look great fun. What better way to see Amsterdam than the water!

If you only have the time or money for one museum on your trip to Amsterdam, please make it FrankHuis.

I think it’s so important that we keep educating ourselves about this unspeakable event that happened in Europe between 1939-45; the genocide of six million Jews and five million non-Jews. We need to go to places like FrankHuis, so we can try to fathom the enormity of what happened, and spread the word to try and ensure that something like this will not happen again.

The museum is small, but powerful; it really provokes emotions and helps you begin to realise the enormity of this tragedy. It normally has a very big queue (we were in line for an hour and 40 minutes), but it is definitely worthwhile. To avoid the queue, you can pre-book a time online (these do sell out, so get there quick), or turn up very early, ideally when doors open at 9am.

There are also lots of other museums in the city, including the Diamond Museum.

Places to eat and drink

A foodie lovers’ paradise, this hall has a huge rang of global cuisine, including mezze, Turkish, and my favourite; The Green Brothers. A completely vegetarian stall (with some vegan options too!), they served an absolutely delicious goats cheese, pear and walnut salad that I devoured!

Drink in a café

Amsterdam and its cafes are somewhat (in)famous for weed being legal and in cafes, you are allowed to spark up, but they’re really great places to chill if you don’t want to smoke too! Lots of them are really funkily decorated, with delicious drinks menus and a great atmosphere. Amsterdam is a very chilled out place, so taking a time out in one of these cafes is a very normal thing to do here. We loved ‘Lost in Amsterdam’.

Eat chips and mayo (from any food vendor)

The Netherlands have the monopoly on… chips and mayo. It sounds a bit underwhelming (and not at all healthy), but they’re actually really great, and one of the best travel tips for Amsterdam is to make sure that you try them!

The mayo is more buttery than normal, and the chips are sensationally cooked. They’re definitely not like what you get in your local chippy! One of my travelling rules is never visit a place without trying the local dish (as long as I can that is, with all my dietary requirements), so I revelled in the chance to eat chips and mayo as a form of obligation.

And so much more…

There’s lots of other museums to check out and activities to do in Amsterdam. With excellent night life and a great food scene too, you could easily spend a lot longer here. 48 hours and a small budget just gave me a sample of Amsterdam, but has certainly inspired me to come back for more. Once again, I visit a city to not have checked anything off my list, but just have expanded it with more things to see or do! That’s the travel bug for you, eh?

There’s a range of accomodation in Amsterdam for every budget, from hostels to apartments to luxury hotels. We stayed in an air bnb, but I’ve heard about some excellent hostels elsewhere in the city. Like all major European cities, you definitely won’t be short of options!

Check out this Amsterdam infographic and quick guide for some more information about the city, including some great ideas for affordable luxury hotels, places to dine and some more ideas and tips for things to do!

Have you been to Amsterdam? Would you add anything to this list?

17 thoughts on “A Whirlwind Tour of Amsterdam: Must-Dos in the City”