Skip to content
Hiking in Latin America is an experience like no other. There’s so many different landscapes in this part of the world that it’s hard to pinpoint the best; whether you’re preparing for Patagonia or hiking to Machu Picchu, it’s safe to say that you’ll have an experience you’ll never forget.

One of my favourite Latin America hikes, however, is a lot further north in Guatemala. It’s easy to whizz through Central America without stopping to marvel at its Volcanic Arc, but doing so is certainly missing a treat – climbing at least one volcano should be on your Guatemala itinerary. Although I had a fantastic time volcano boarding in Leon, Nicaragua the year previously, I had actually never hiked a volcano before, so when my hostel in Antigua recommended an Acatenango hike, I jumped at the chance.

Fifteen minutes into the trek and jumping was the last thing I wanted to do. My heart was pounding out of my chest, I was sweating profusely and I could feel the two cereal bars I’d consumed for extra energy trying to come straight back up. One foot in front of the other…. At 20 minutes we reached our first stop.

Relieved to see I wasn’t the only one finding this uphill struggle absolute inferno, but seriously concerned about the fact that we had only completed about 5% of the trek, I slumped down next to a tree root with my bottle of water. I lay recovering for about five minutes until I heard the dreaded “vamos!” (Let’s go!). I put on my rucksack (carrying 4 litres of water and subsequently working with gravity to pull me back down the volcano- not the way I wanted to go) and took a few tentative steps towards the next crazy incline. The first three minutes post break were ok, just a little bit uncomfortable- but after five I was ready to cry, scream and throw up, in any order. 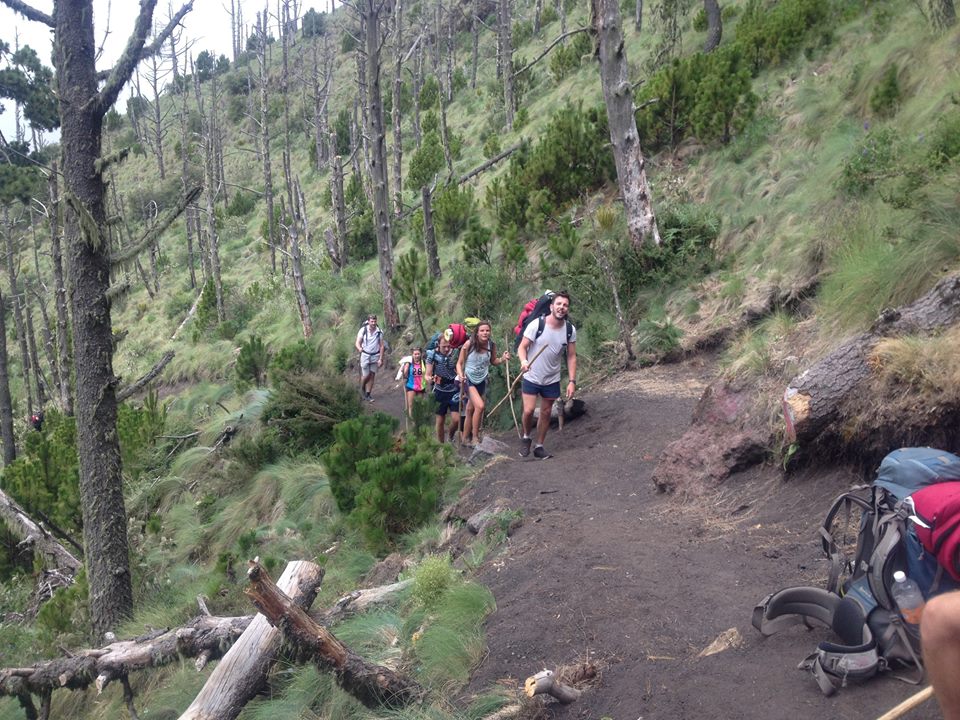 The first two hours passed on a repeat cycle of the above. Despite the absolute inferno of each 20-30 minute trek, the complete elation felt when we reached a stop made each painful step a little bit more worthwhile. As we started to ascend higher, the views became more beautiful and we became more determined to reach the top and conquer Acatenango. 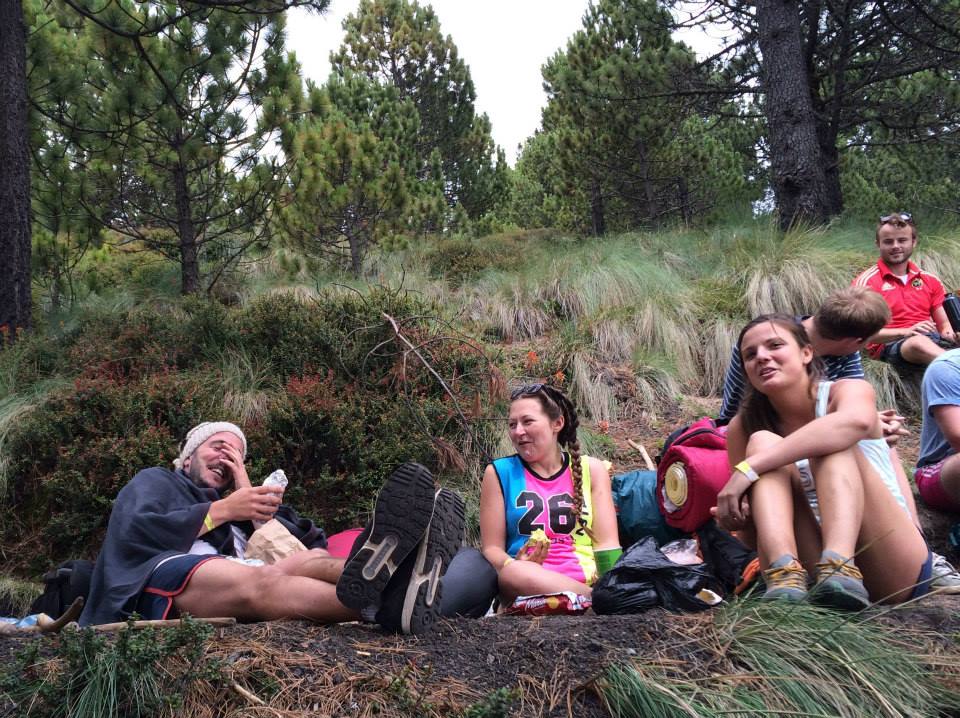 It was hard. Really hard. I’m talking heart pounding out my chest, muscles that I didn’t even know existed screaming at me hard. I’ve ran two half marathons and I regularly run 8-10 miles. It was like nothing I’ve ever experienced before.

The higher you go up, the less oxygen you have. The more exhausted you also get. That means that it’s difficult to talk, smile or even breathe. You have to develop a ‘one foot infront of the other’ mentality and literally grit your teeth until each stop (which is every 20 minutes or so).

You’ll experience a huge amount of joy everytime you get to a stopping point, and an overwhelming fear and dread every time you leave.

Acatenango is not for the faint hearted; but as long as you’re in good health, and you are determined, you’ll be fine. I’m not going to lie, I think of myself as pretty fit and it was the physically hardest thing I’ve ever done, BUT it’s not impossible. You don’t know how much potential your body has until it’s out of its comfort zone – and on an Acatenango hike, it certainly will be… 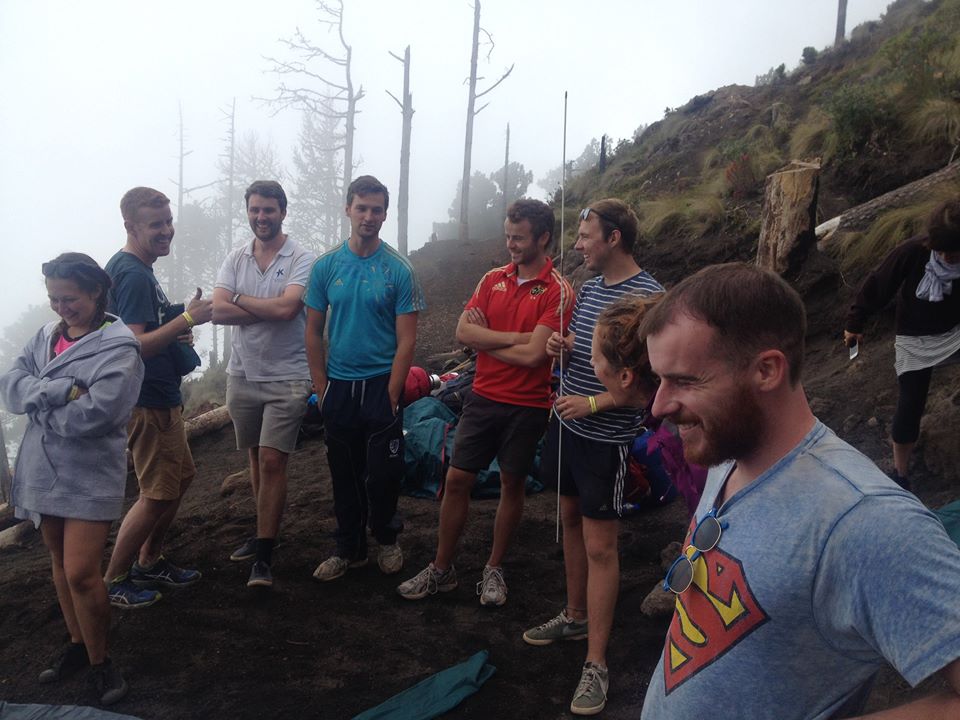 Once we reached the camping spot- about three quarters of the way up the volcano- I was so elated about being able to sit down for longer than five minutes that I didn’t even care about the view, which was currently obstructed by the clouds. But after we put the tent up, the clouds dispersed and suddenly all my aches and pains vanished. 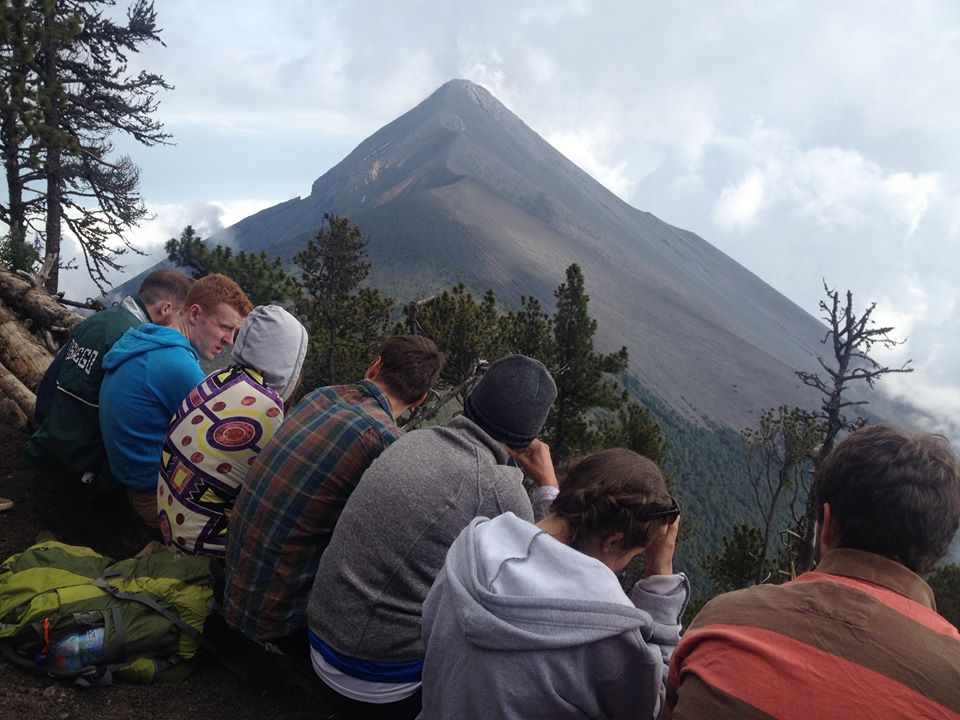 We were in a bizarre situation: camping on a volcano, watching another volcano erupt, so high the clouds cushioned out below us. As soon as the sun started to set- tinting the clouds glorious shades of orange, pink and red- we started to see glowing lava spill from the volcano tip. As it got darker the lava became more noticable, fizzing and crackling every time more ash erupted into the darkening sky. 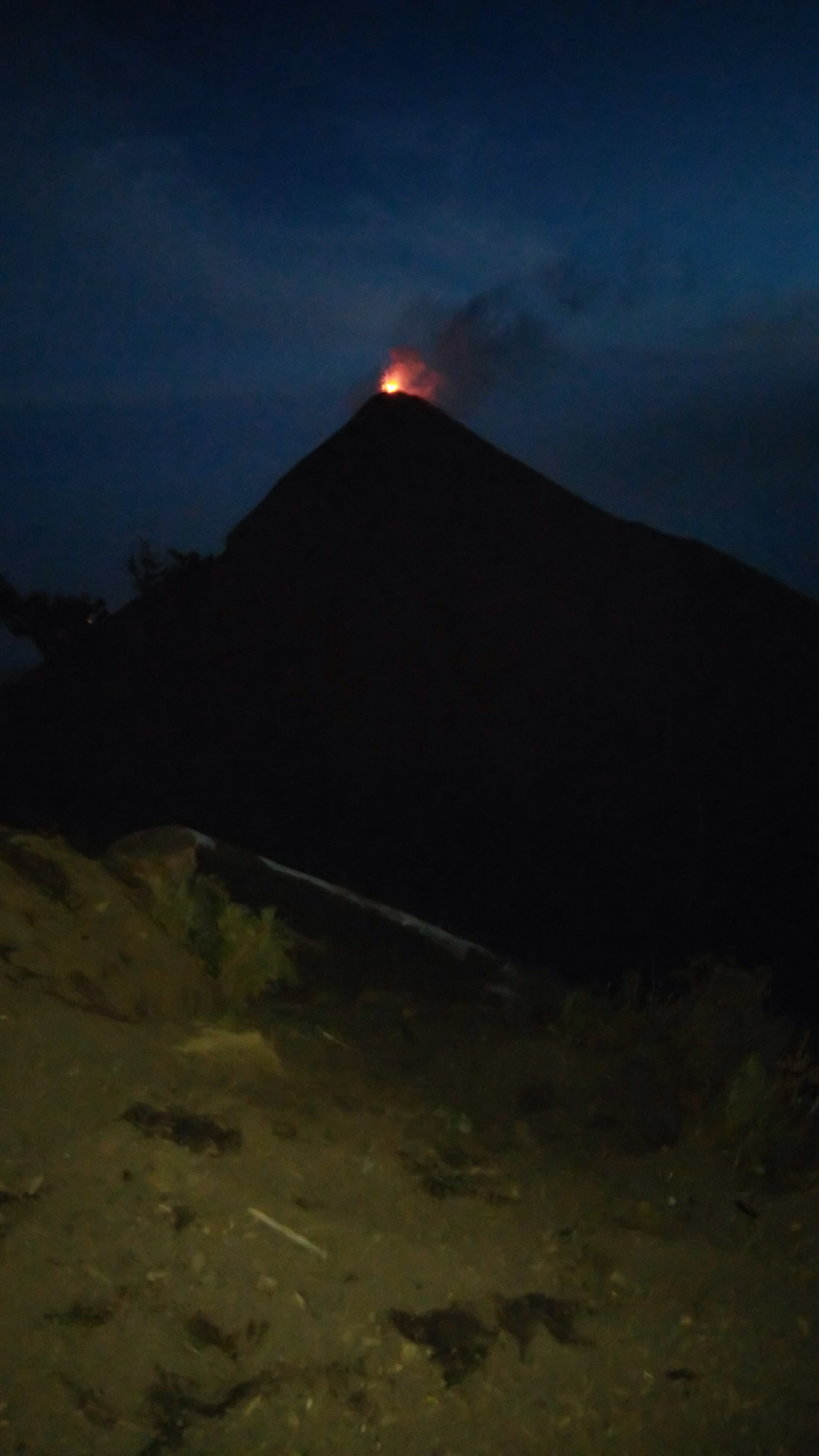 A word on the Acatenango hike weather

While Guatemala normally enjoys a subtropical climate, on the Acatenango hike weather can be unpredictable to say the least. The people who hiked the day before us advised to take really warm clothes, as it got down to -1C the night before (!). You probably won’t have this kind of outfit with you in Guatemala, so check out the local market OR see if you can buy clothes off people in your hostel (there’was a kind of trade system going on in mine which was pretty cool).

As with anywhere in Central America, it might rain, unfortunately there’s not a huge amount you can do about it! If you go during the dry season, you’ll probably be alright, if you go in the wet season you might still be ok – we hiked in August and had a beautiful dry day! 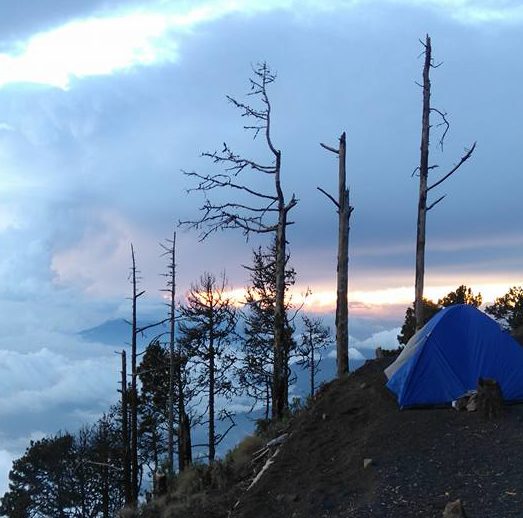 We passed the early afternoon setting up camp, chatting and making dinner. Part of the reason I love doing these trips is the great people that you meet on them, and we had a lovely group. I guess there’s a kind of ‘unity in suffering’ – because we’d all gone through the same excruciating trek, we all instantly had a common ground and got on really well. 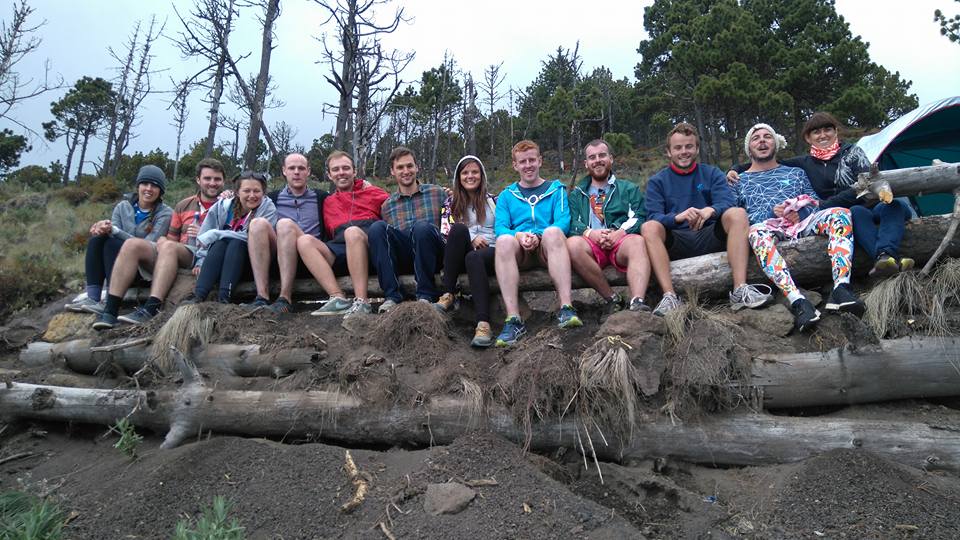 Here’s a thing. I suffer from awful insomnia in my bed at home. It takes me hours to fall asleep normally. But put me in a tent, with 11 people I’d only met that day, on the face of a huge volcano, with another volcano opposite erupting every 5 minutes? Out like a light, and slept straight through until my 4:30am alarm the next morning. And it was only the promise of the sunrise that dragged me out of my sleeping bag.

Seeing the sunrise on Acatenango Volcano

But wow, am I glad it did. ‘Breathtaking’ is a bit of an overused word, but there are some moments in life that really do take your breath away. After another excruciating 45 minute hike, we reached the summit of the volcano and were immediately greeted by the rising sun. Watching the sun come up in tranquility is pretty astounding at any time, but watching the sun break through the clouds from a viewpoint 3000m high is something truly special.

I was in pain, unrecovered from the day before and feeling worse for sleeping on the ground all night, but suddenly it didn’t matter. Nothing really mattered. The only emotion I felt was sheer joy and wonder at the beautiful world we live in. It was the most amazing thing I’ve ever seen in my life. On top of that volcano, I felt like I was in paradise. 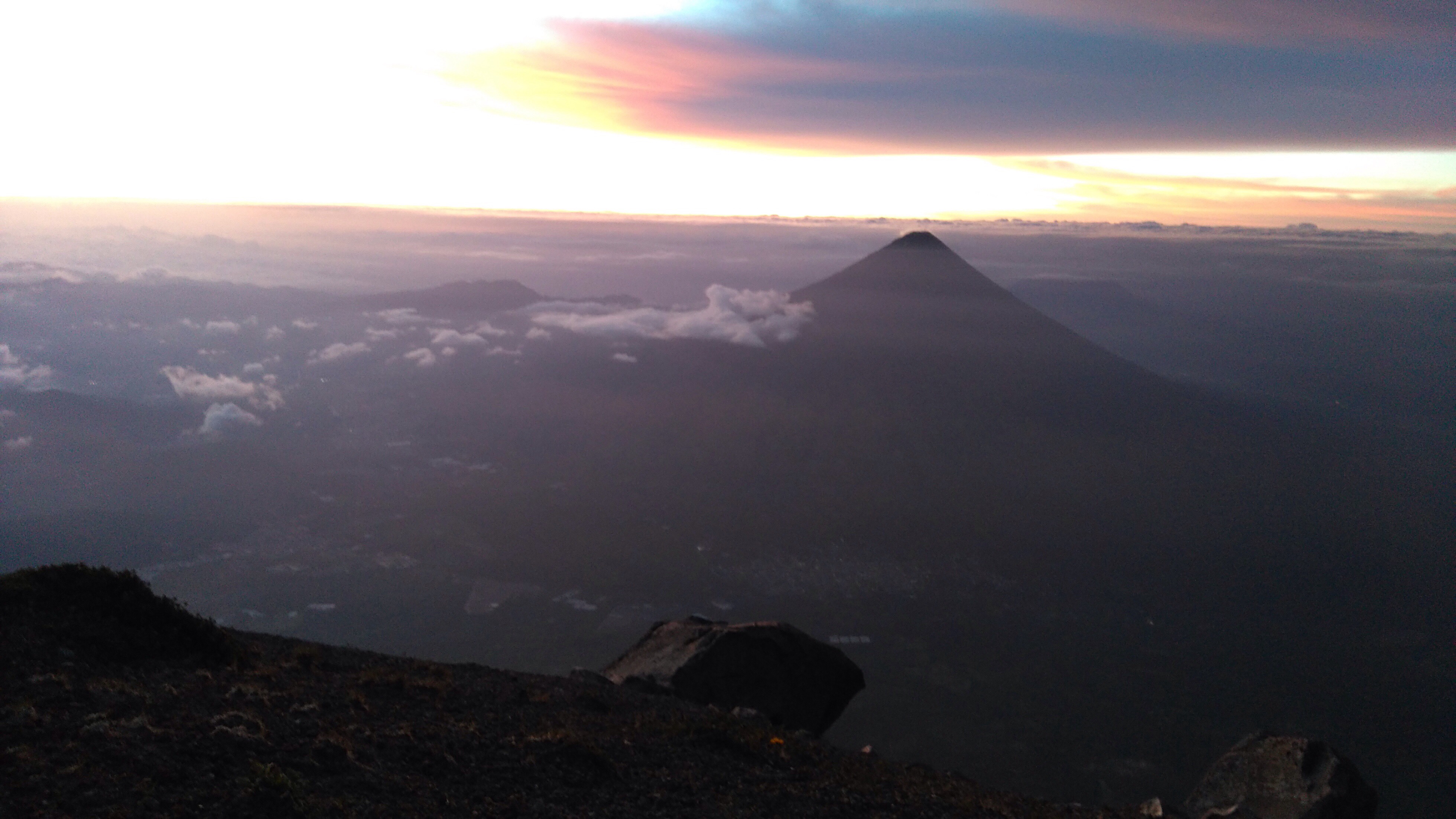 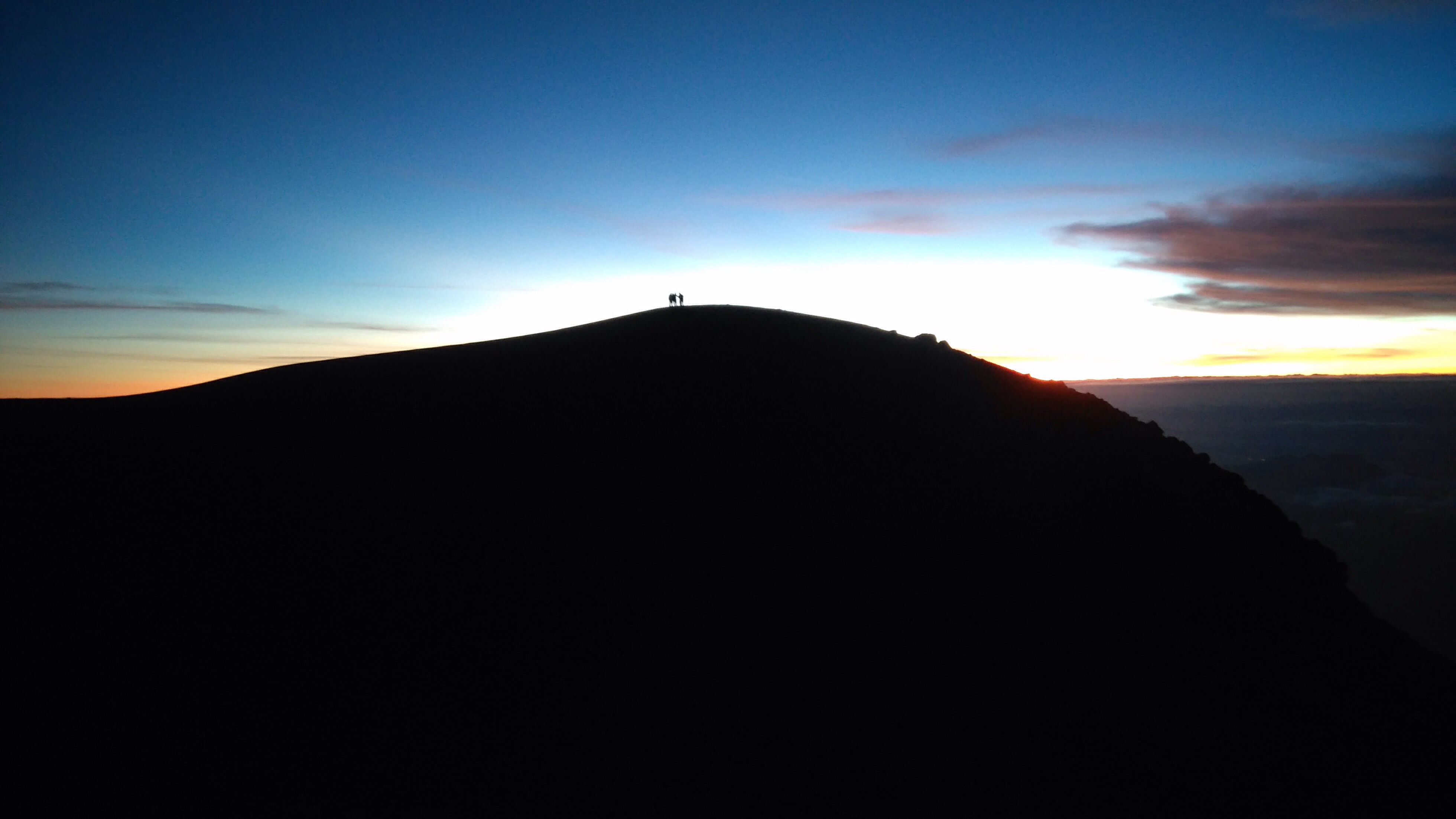 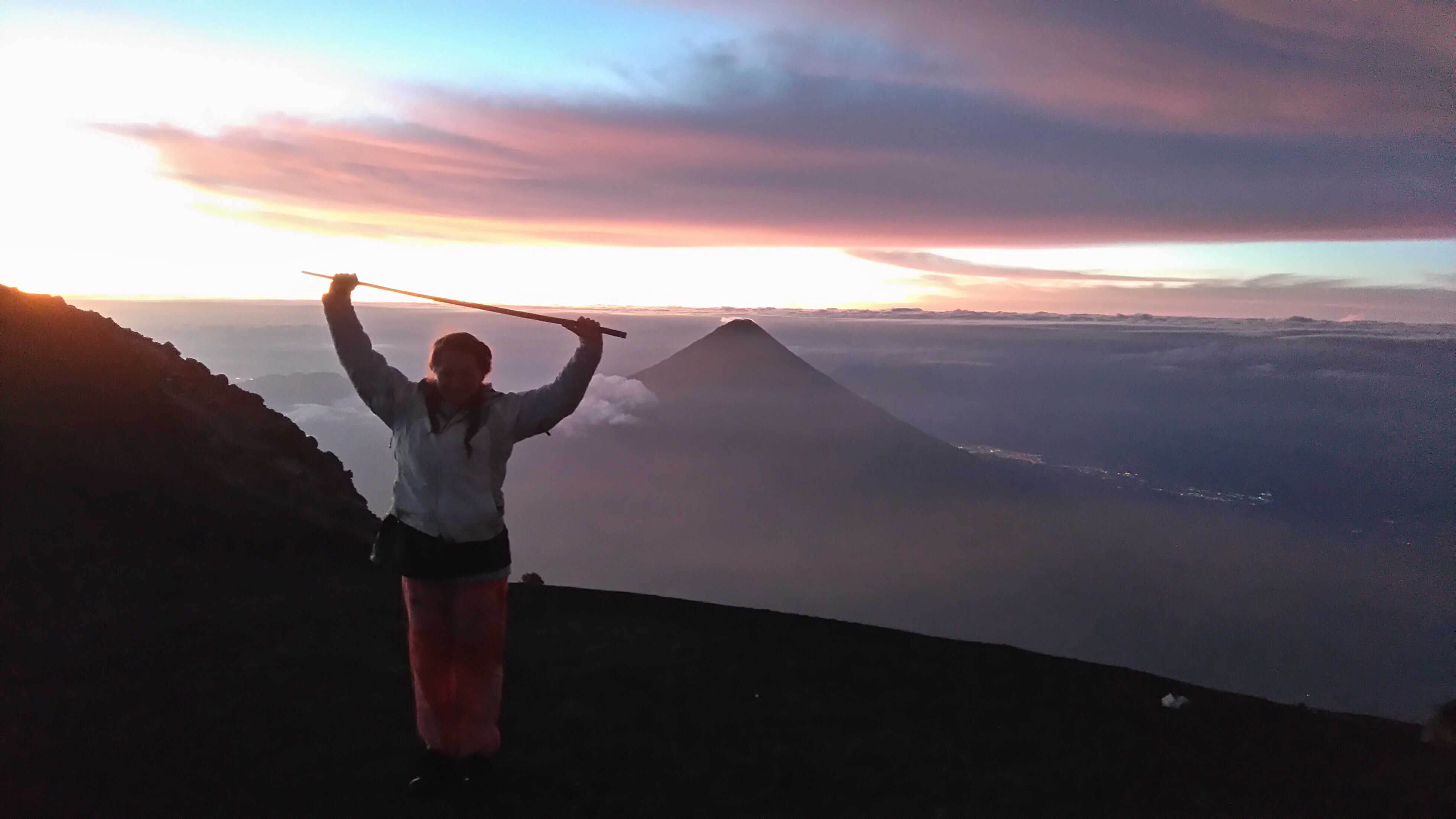 No matter how hard the uphill climb was, and ignoring the fact I fell about 50 times on the way down, experiencing Acatenango was definitely one of the best things I’ve ever done in my life. Sometimes you have to go through hell to find heaven!

Hiking Acatenango Volcano? Here’s what you should bring! 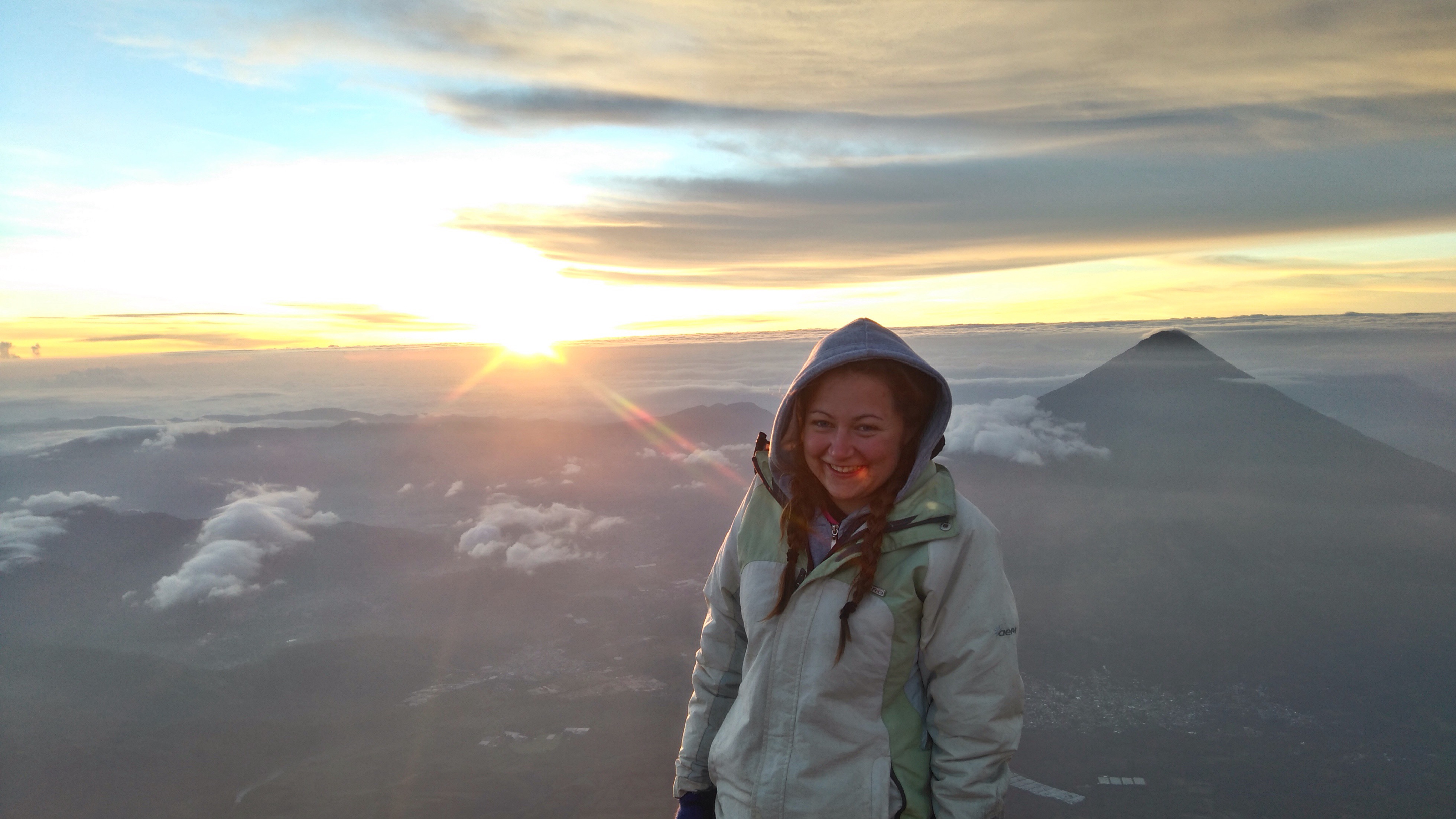 Want to read more about Guatemala? Here’s my take on the safety of Guatemala, and the ten things that Guatemala does best, in my opinion! 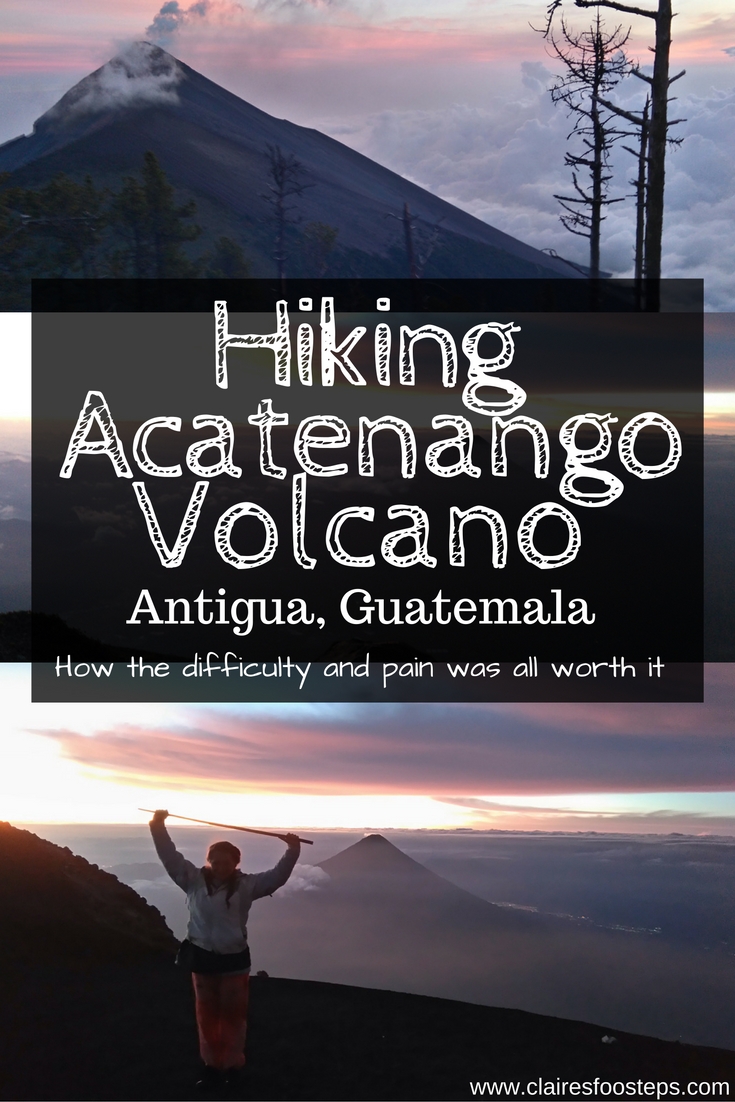