A few weeks ago, I arrived back in Mexico for the 16th time.

I’ve been to this country more times than any other – even France, which I can reach by car and train from where I’m from in just over 2 hours.

The first 12 trips to Mexico weren’t really my choice – my dad moved here when I was 14, meaning that I spent every Christmas and Easter here, as well as an extended period in the summers.

But the last 4? Definitely all my doing.

This is my second extended visit since I’ve been an adult (I was here for 5 months in 2018, and will be here for 4 months this time), and I can see many more in the pipeline for the future.

There’s so much I want to learn about Mexico, from Mexico, and I have so many tacos to eat, mezcals to drink, pueblos magicos to visit, nature to photograph, and millions more reasons to keep visiting again and again.

So here they are. This is why I’ll never stop coming back to Mexico…

Mexico is such a colourful place.

From the buildings in the colonial towns, to the rich colours of the food, there’s so much to feast your eyes on here. The Pueblos Magicos (magic towns) are a string of towns and cities throughout the country, with bright coloured buildings and cars, and cathedrals sitting at their centre.

Everywhere is so vibrant, and I’ve always found walking around Mexican streets to be an instant mood-lifter.

Latin music can be heard throughout Mexico, Central America and South America, as well as many Caribbean islands, of course, but there is no denying that they absolutely love their music in Mexico.

On every street corner, there will music of all kinds, from blaring Latin pop songs, to a guy playing Titanic’s ‘My Heart Will Go On’ using a leaf instrument (not a lie, I witnessed this a few hours ago).

In the cities, there are even lots of singing street vendors – as soon as I hear someone advertising Tamales Oaxaquenos, I get a warm fuzzy feeling inside me and know I’m home.

I’m not sure if you’ve heard, but Mexican food is really good.

It’s nothing like the Mexican food of anywhere else in the world though, apart from maybe the London restaurant chain Wahaca (the most authentic Mexican food I’ve ever had outside of Mexico).

Real Mexican food is soft tortillas that make tacos, tamales which are big balls of dough wrapped in banana leaves and smothered in sauce, tortas which are Mexican-style sandwiches, and mole, which is a sauce that uses about 28 ingredients and has the most comprehensive cooking technique, which unsurprisingly makes it the most unique sauce I’ve ever tasted.

Oh and allll the guacamole. Mexican food really is a cuisine of its own – it bears similarity to Central American cuisines, but it’s really got its own thing going on.

The number of tacos I’m eating can’t be good for my body, but they’re so good for my soul.

I’m trying my hardest to learn Spanish, and I really want to be fluent – hopefully before I’m 30, although time does seem to be running away with me.

While Mexico probably isn’t the best place in the world to learn Spanish – I think Guatemala, where there isn’t much local slang, they speak really slowly and pronounce everything beautifully, takes that crown – I really enjoy learning Spanish in Mexico.

Some Mexicans speak excellent English, especially in touristy areas, but it’s not uncommon for Mexicans to not speak any English at all, and even if they do they are often happy to speak Spanish instead.

This makes speaking Spanish, especially when venturing to areas less explored by international tourists, essential. And I love the challenge.

It doesn’t surprise people that Mexico is an affordable destination, but I think a lot are shocked when they realise how cheap some things are. I lived in Oaxaca for 5 months, and could get by on £400.

If I was doing a few day trips, drinking a bit more, and eating out a couple of times a week, £600 would be a more realistic budget. That’s still a crazy price compared to what I’d be paying for the same in the UK.

While Oaxaca is one of the cheapest places in Mexico, everywhere else is relatively affordable as well. A decent studio Airbnb in Mexico City costs around £20/ $23 USD per night, and you can get vegan street food tacos in Condesa (the trendy area) for 10 pesos a pop (less than 0.5 GBP or 0.4 USD).

Your money can go a long way in Mexico. I love coming here to have a base for a few months, to catch up on work, and to save some money up.

Mexico is the 13th biggest country in the world, so it’s unsurprising that there’s a lot of diversity going on.The Spanish landed in Mexico in 1519, and subsequently, there was a bloody 2-year war against the Aztecs and other empires to gain control over what they called ‘New Spain’.

Spanish fighting and newly introduced diseases like smallpox tragically killed a lot of natives, but there are a lot of Indigenous communities still today, particularly in Oaxaca and Chiapas – although nearly all Mexicans now have some Spanish ancestry. That being said, there are plenty of Indigenous cultures to explore in Mexico, and I think that this is done in a really nice way.

There are Aztec cultures in Mexico City, Mayan people in Yucatan, and Zapotec in Oaxaca. There are also groups in Northern Mexico like the Raramuri, who are the largest ethnic group in the region, and the Papgo who are a binational ethnic group, as the Mexico-US border cuts through their territory. 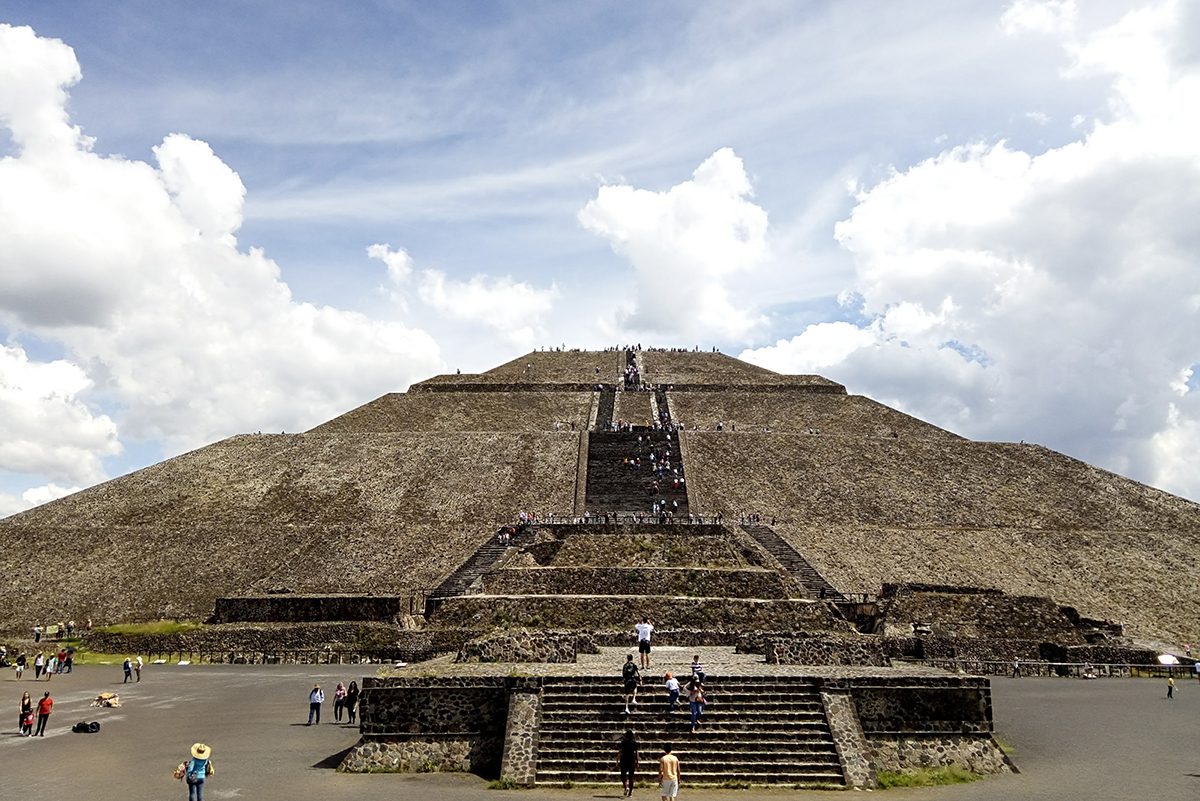 There are also lots of Mixtec people, who come from a range of places – some African, Native, European and more recently Asian. Migration to Mexico from Asia and Europe is becoming more common, and in the large cities, especially Mexico City, you can even get decent ramen.

There’s geographical diversity too, as you’d expect from such a huge country.

Whether you want beaches, mountains, desert, or jungle, you’ll find it here in Mexico.

Many people just visit Mexico for the beaches – and of course, there are beautiful ones.

Beaches in Yucatan are probably the most stunning, with the reef nearby and plenty of cenotes near Playa del Carmen and Tulum, but the beaches on the Pacific Coast are lovely too. Doing a beach crawl up the Oaxacan coast is hard to complain about.

Apart from the fact that then you’d be missing the mountains. I think the Mexican mountains are magical. There are loads of hiking opportunities, and in the less touristy zones, people are especially friendly and welcoming.

The little pueblos are charming and make a great escape from Mexico’s wonderful but sometimes hectic cities. If you venture north, you’re in desert territory.

My most recent trip was to the Copper Canyon in northern Mexico, and although it was cut short, it was spectacular.

And head further south, towards the border with Guatemala, and you’ll find jungle.

Again, I haven’t been here much yet – but if you’re after tropical heat and the chance at seeing some of Central America’s famous wildlife, it’s worth a visit! And you can do all of this without even leaving Mexico!

The History and Culture

I’m fascinated by Mexican culture and have decided it’s what I’m going to niche on in the next few years (watch this space for more announcements!).

Of course, a lot of Mexico’s history has been bloody.

A lot of its present is still bloody (although that’s by no means a reason not to visit, which I’ll go into in the next point), but there are so many beautiful aspects to its history and culture as well.

There’s so much Mexican history that I want to learn about, which means that I do need to keep returning. Like how the Aztecs formed ancient empires and built huge pyramids.

How ‘New Spain’ waxed and waned, at one point spanning well into the USA and down to Costa Rica. How the Mexicans fought for Independence and eventually gained it in 1821.

And how the Mexican revolution in 1910 changed the country forever. Modern-day Mexico does have its issues, I’m not going to deny that. But something that never fails to draw me to the country is how, through everything, the people maintain such a cheerful and welcoming persona, and keep their culture vibrant and alive.

Modern Mexico is the home of the fiestas with piñatas, weird festivals like the exploding hammer festival I recently experienced, and tequila and mezcal.

The country does have some issues, although as a tourist it’s unlikely you’ll run into them, but the Mexican ability to remain positive throughout it all is something that I’ll always admire.

It’s Safer than You Think

When I ask people if they would like to visit Mexico, those who say no normally come up with the same reason.

If I had a peso for every time I heard “but is it safe?” I could get extortionately drunk on Mezcal every night for the rest of my life.

I could write a book on this – maybe I will, one day – so I’ll just give you the SparkNotes version right now.

Mexico is not 100% safe. There are things you have to consider.

Uber is better than hailing taxis on the street (this only applies in some cities, in many cities normal taxis are fine, Oaxaca being one of these).

If you’re a solo female traveller, use the women carriages on the metro.

And other than that? It’s really not that bad.

If someone mugs you, give them what they ask for.

Items can be replaced.

Scary stories come out of Mexico. But cartels don’t want to hurt tourists.

It’s heartbreaking for the people that they do want to hurt, but I know that locals do want tourists to know the facts.

There is a small chance of being caught in a crossfire if you are in the wrong area at the wrong time – but generally, the wrong area is somewhere that no tourist would end up being in anyway.

There are nearly 130 million people living in Mexico. The overwhelming majority of these people are good people, many who work in the tourist industry and are delighted to welcome visitors to their country, especially in places that aren’t as visited as others.

I would never advise a few stories to stop you from visiting a country.

This is a personal one, but this country will always feel like home to me.

I feel so comfortable on the streets of the cities, or up hiking in the mountains.

There are things that I don’t like about the country, sure – but I love it despite everything.

The culture, colours, music, nature and food all roll up into one to make it my home away from home, my Mexico.

Even though I don’t have any family here anymore – although I am growing a solid base of friends – whenever I step onto Mexican soil I get the same feeling. I’m home.