Despite being a travel blogger, and travelling full time since 2016, I didn’t make it to Thailand until mid-way through 2018. Then I more than made up for it and have visited six times in the last 2 years…

After visiting all the main touristy spots of Thailand, including Bangkok, Chiang Mai, Pai, Phuket, Krabi and Koh Lanta, I decided that one day I’d come back and try to find the more authentic Thailand. Thailand is a huge country, and even though there are pockets that are very touristy, most of the country actually isn’t – just certain places get all the tourists while other places get none.

That day came sooner rather than later, as I was contacted by someone at Duara Travels who wondered if I wanted to try one of their homestay experiences. They offer these experiences in different locations around the globe, but as I was spending Christmas in Malaysia, I thought Thailand was the most obvious place to go.

So I returned to Thailand, vowing to find some less touristy spots in the country. And I succeeded – first I went to Hat Yai, which is a border town popular with Malay and Singaporean tourists but with very few westerners, and then to Kanchanaburi, which is a little more touristy but mainly with people learning about the WW2 history there.

Then I took a bus to Bangkok, a night train to Chiang Mai, a bus to Lampang and finally got a lift from Lampang to Pong Nam Ron with my host family. It was quite the journey, but I weirdly enjoy travelling on trains and buses for over 24 hours straight. I learned to love it when I travelled from Bali to London overland, at least!

It was time to find the real Thailand. 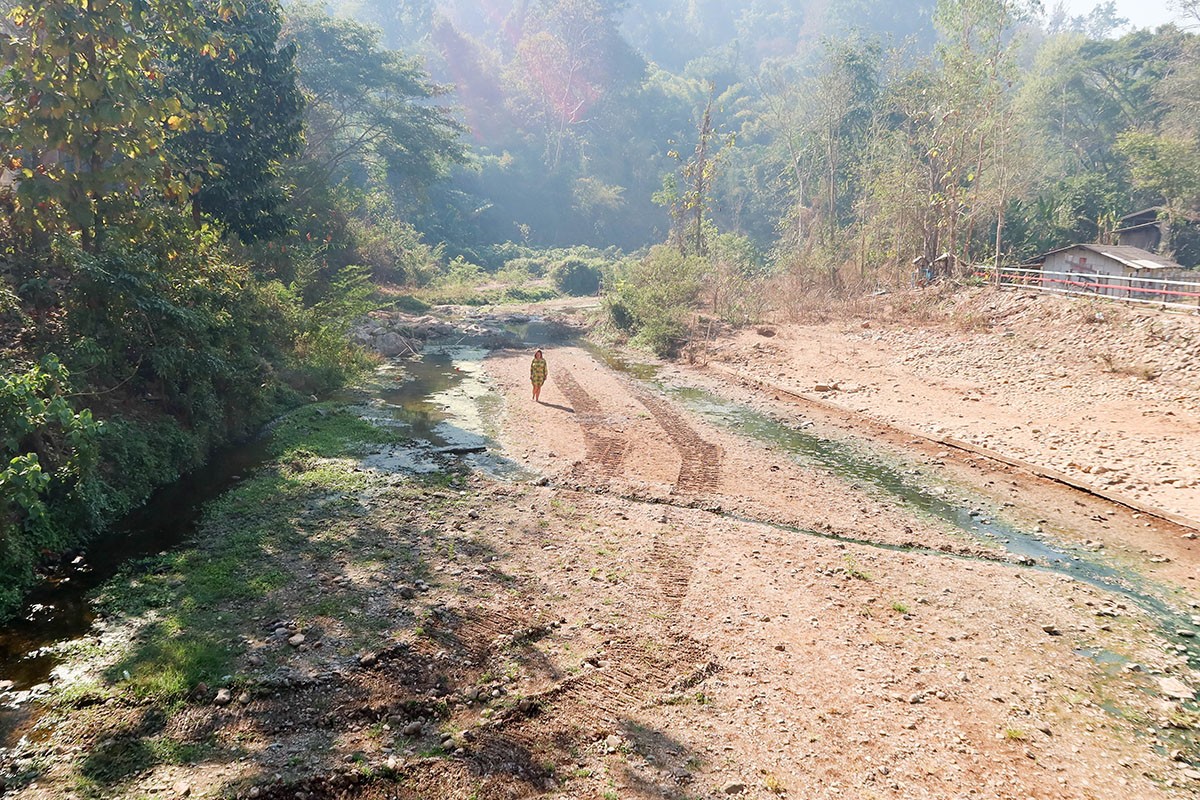 Pong Nam Ron is located about two and a half hours from Chiang Mai, or an hour and a half from Lampang, its nearest city. It is the last village at the end of the track, just before the forest and wilderness begins. It’s got a population of about 500 people, who are mainly Karen people, an ethnic minority in Thailand.

They speak Karen as well as Thai and have a few different customs which I’ll go into later in this post. The Karen people in Pong Nam Ron are all Buddhist, however, some Karen communities are Christian, and many groups just practice Animism or Animism with Buddhism. 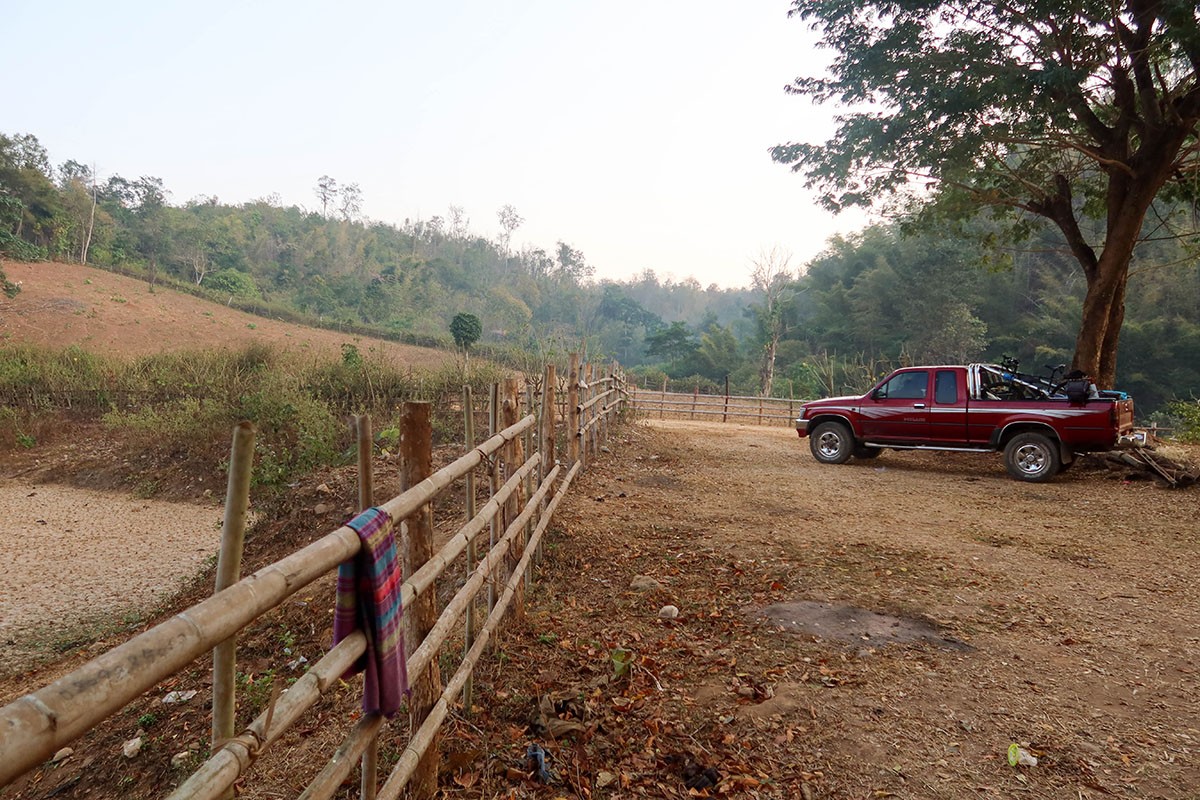 Karen people live all over Northern Thailand; they actually native to neighbouring Burma but many tribes settled in Thailand a long time ago. ‘Karen’ is an Anglicisation of Kayin, which is their original name in Burmese.

They have struggled for recognition and rights throughout the years, but this is slowly changing. However, they live mainly in rural communities and work as farmers or weavers.

Karen people speak their own language, although nearly everyone can speak Thai as well. They have a few traditions that are different to the rest of Thailand – although, when I asked if there was anything I needed to be aware of when in the village, so I didn’t offend anyone, all I was told was that there are often black pigs inside people’s homes, and under no accounts should I touch them –  so just remember don’t touch the pig, and you should be alright in a Karen village!

The Duara Travels handbook also advises travellers not to knock on wood and sit on pillows in Karen villages, and to always take your shoes off when you enter a house.

The Journey to Pong Nam Ron

I was met at Lampang Bus Station by my friendly English speaking hosts, Jane and Jim. Jane’s a local from Pong Nam Ron, and her family live in the village – Jim is from Bangkok, does not speak Karen but has settled in the village after marrying Jane to enjoy a more relaxed pace of life in the countryside.

We began our trip to Pong Nam Ron, which begins on the highway but soon peters out to country roads, dotted every so often with a rural village. We stopped in one of these to get some street food and fresh vegetables at a small local market, where all sorts of ingredients are sold. 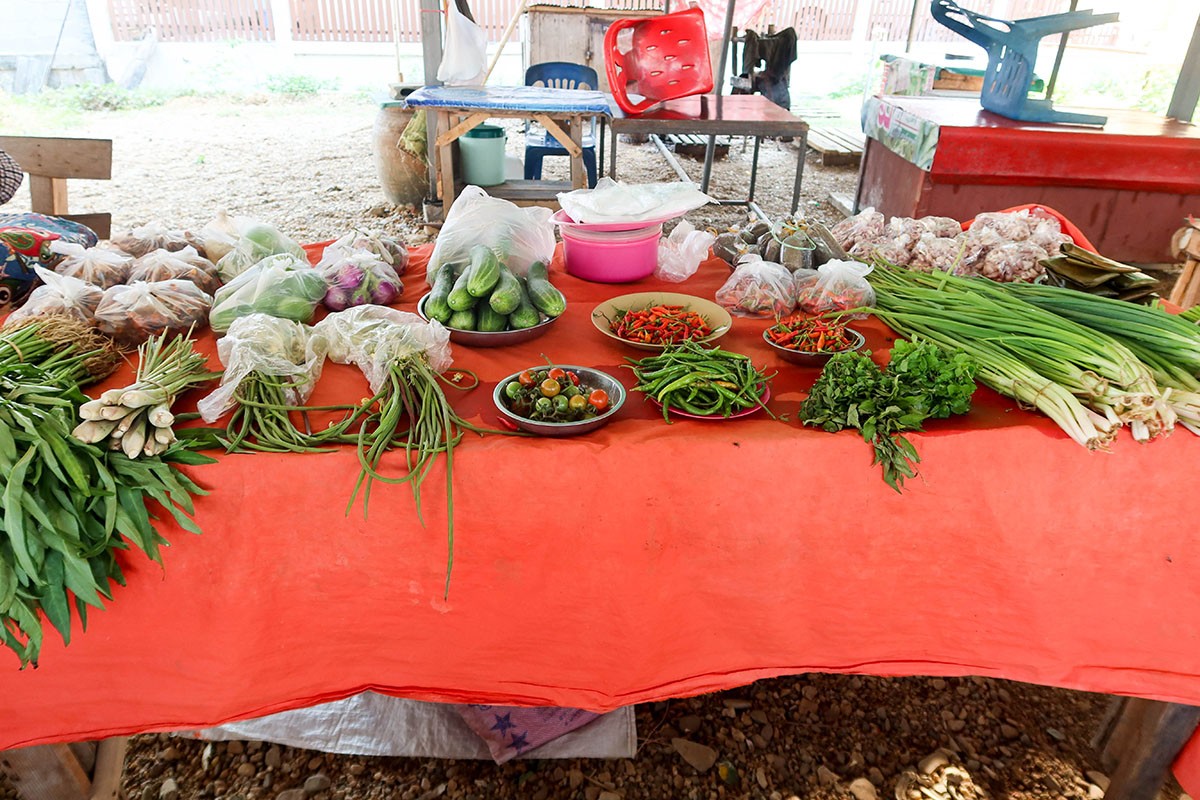 After purchasing some fresh veg, we were on the way again, and about half an hour later we arrived in Pong Nam Ron.

Things to do in Pong Nam Ron

We camped on the first night in Pong Nam Ron, about 6 kilometres from the village and in a rural rice terrace setting. It wasn’t really a campsite, just a bit of land by the rice terrace, but there was a toilet nearby and a platform to put the tents on – which I was very glad we had, after seeing a snakeskin on the ground right by my tent!

We set up stoves and started cooking up our dinner for the night; sticky rice and vegetables for me, as well as a local rice wine which I was advised is ‘like whiskey but sweet’. I wasn’t expecting to like it – I normally find rice wine very difficult to drink – but it was actually only 7% alcohol and really quite tasty. I’m not sure if it was the journey, the rice wine or being in nature – probably a combination of all three – but I felt exhausted after dinner, and retired to my tent at about 7:30pm – probably a record-breakingly early bedtime!

It did get quite cold in the night, and was rather noisy, with a lot of barking dogs around. Bearing that in mind, I did prefer the second place I stayed on this trip – more on that to come!

Anyway, I was awake at about 6am, ready for a Friday morning hike. 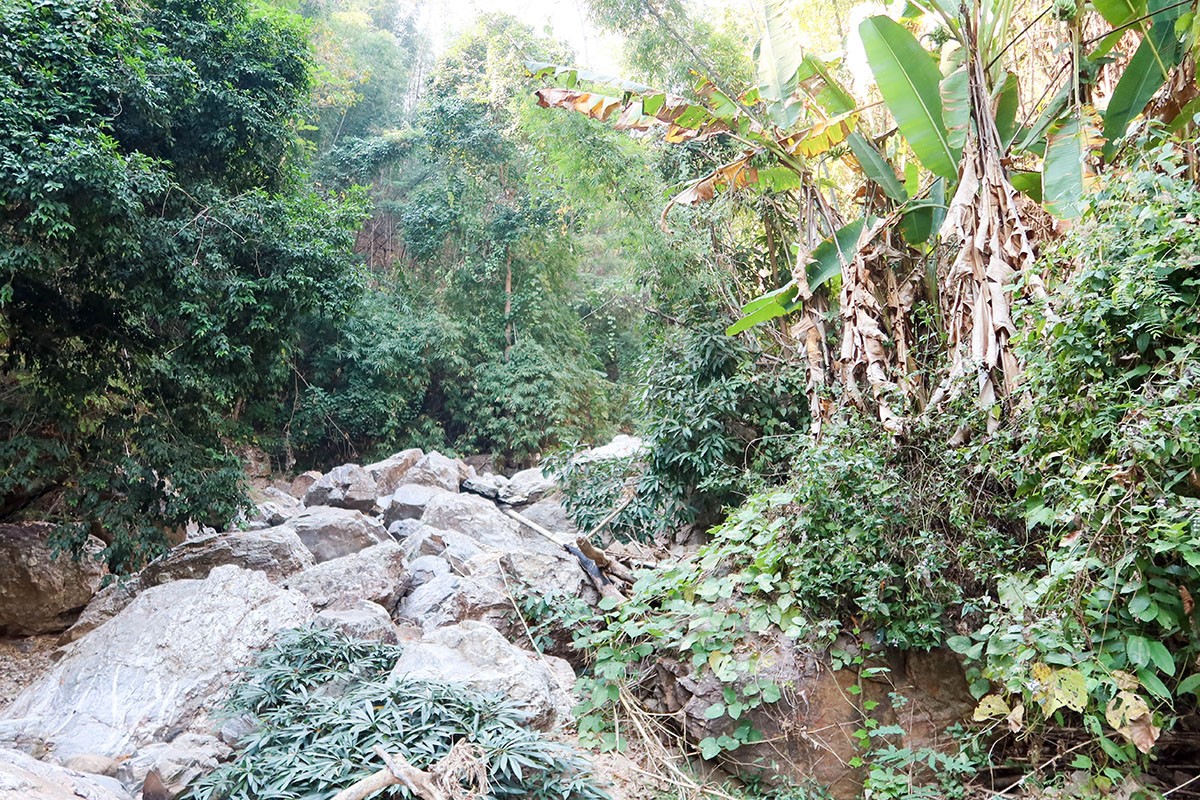 We hiked through a jungle trail to a dried-up waterfall, and then back to the village. This hike is quite strenuous, with a lot of climbing involved, although it’s not that long. There’s also the chance to do a 9km hike along the riverbed.

The rest of the day was spent walking around the village, chatting to some friendly locals and learning about local customs. Some people invited me into their home and gave me some local food. Then we walked up to the Buddhist temple, and I learned about Buddhism in Karen culture. 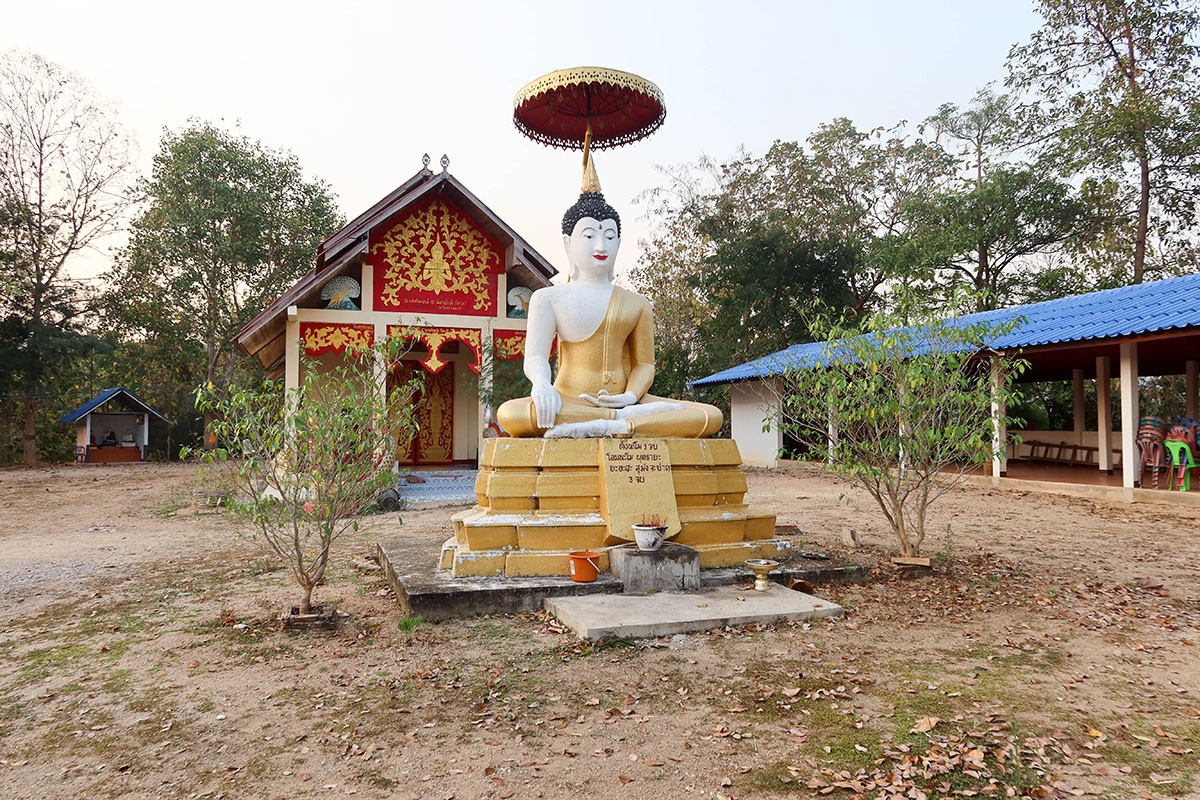 The monk even opened up the temple for us and showed us around, and said a prayer and gave me a blessing for my safe travels – which is always good to have!

We walked back down the hill just as the sun was setting over the mountains, and the village, located in a valley, started to enjoy dusk. 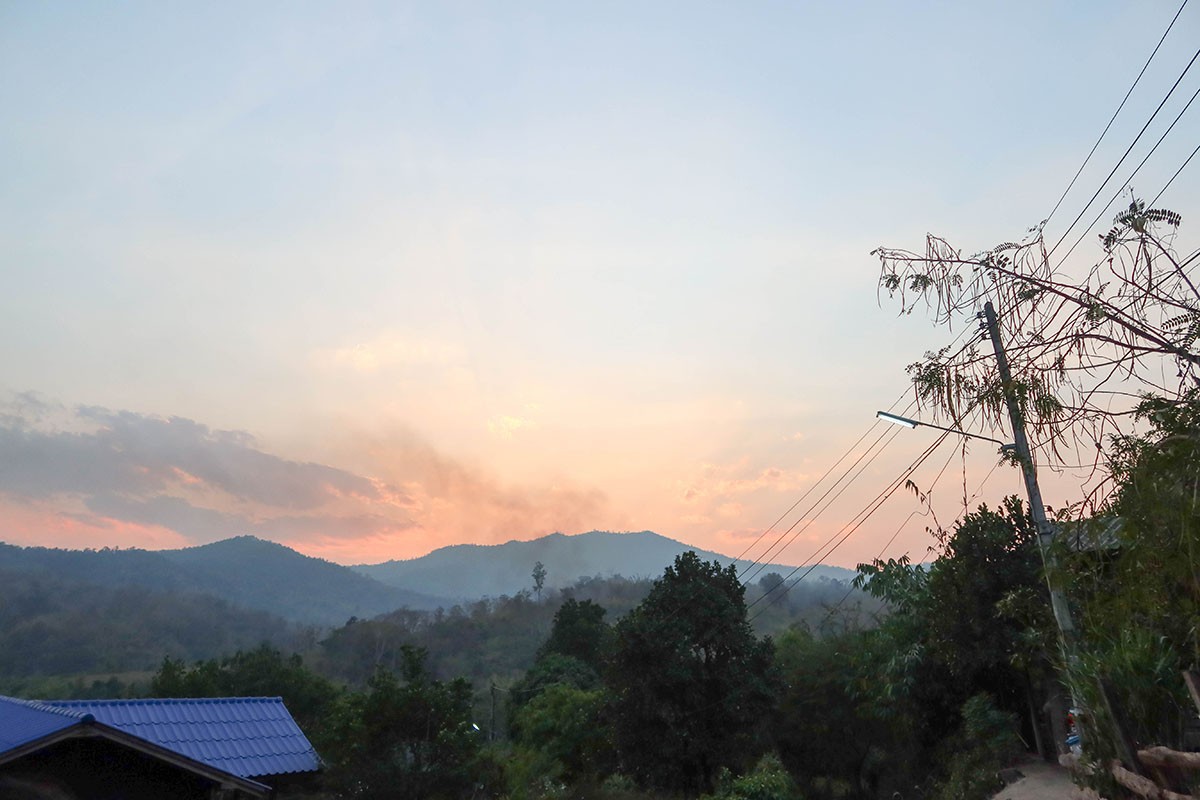 The next morning, it was time to try out Pong Nam Ron’s famous hot springs. These run through the river of the town, actually right under the bridge that’s by the farmstay where I stayed on the second night, so they’re really easy to get to! 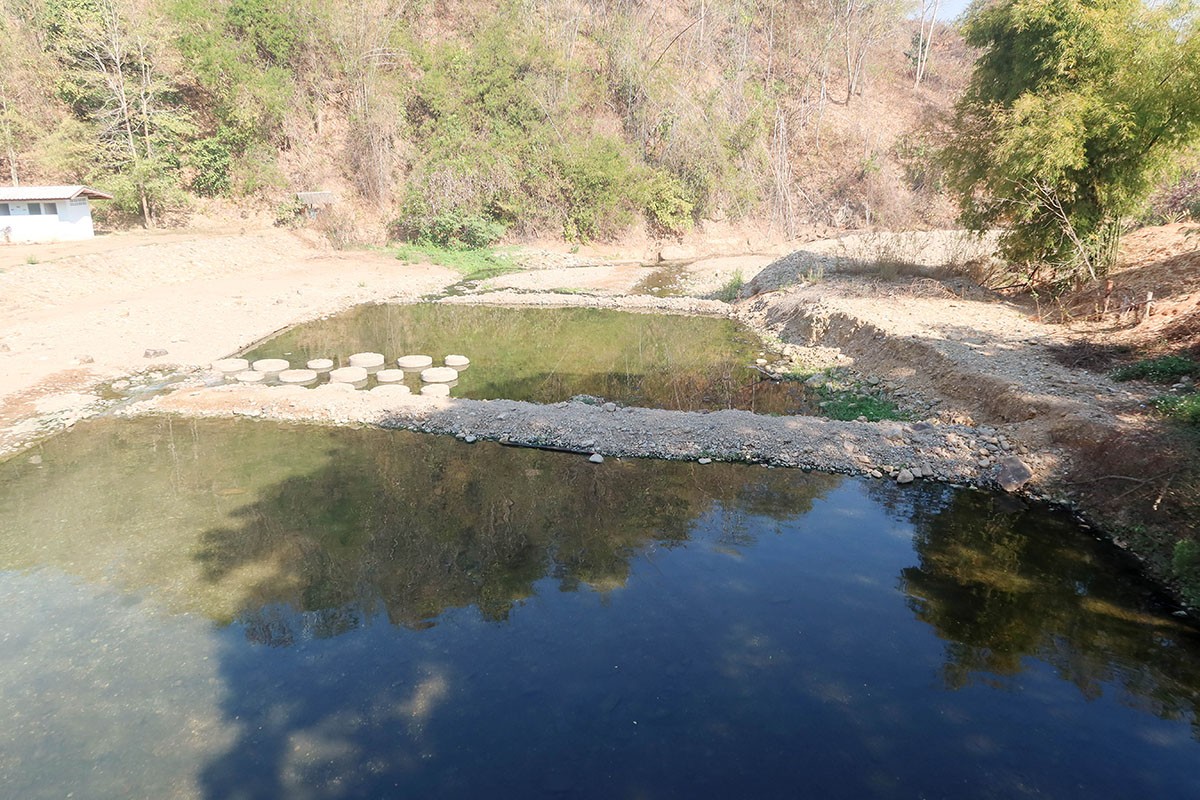 The water ranges from tepid to scalding, but I eventually managed to find a spot that was pretty comfortable! Winter nights in Pong Nam Ron get very cold, so using the hot springs in the morning is a great way to warm up.

All too soon, it was time to leave Pong Nam Ron and head back to Chiang Mai. Because my hosts were going to the market in Chiang Mai that day, they gave me a lift back to the city.

Jane and Jim own a beautiful farmstay. It looked like a treehouse tucked into the woods, wonderfully rustic and opening straight out onto the trees, but kitted out with electricity and bathroom facilities.

I stayed there for one night during my time there – if I’m honest, I would have preferred to stay at the farmstay both nights, it was really lovely and peaceful, so if you end up staying in Pong Nam Ron have a think about what is on offer and chat to the hosts about your preferences! 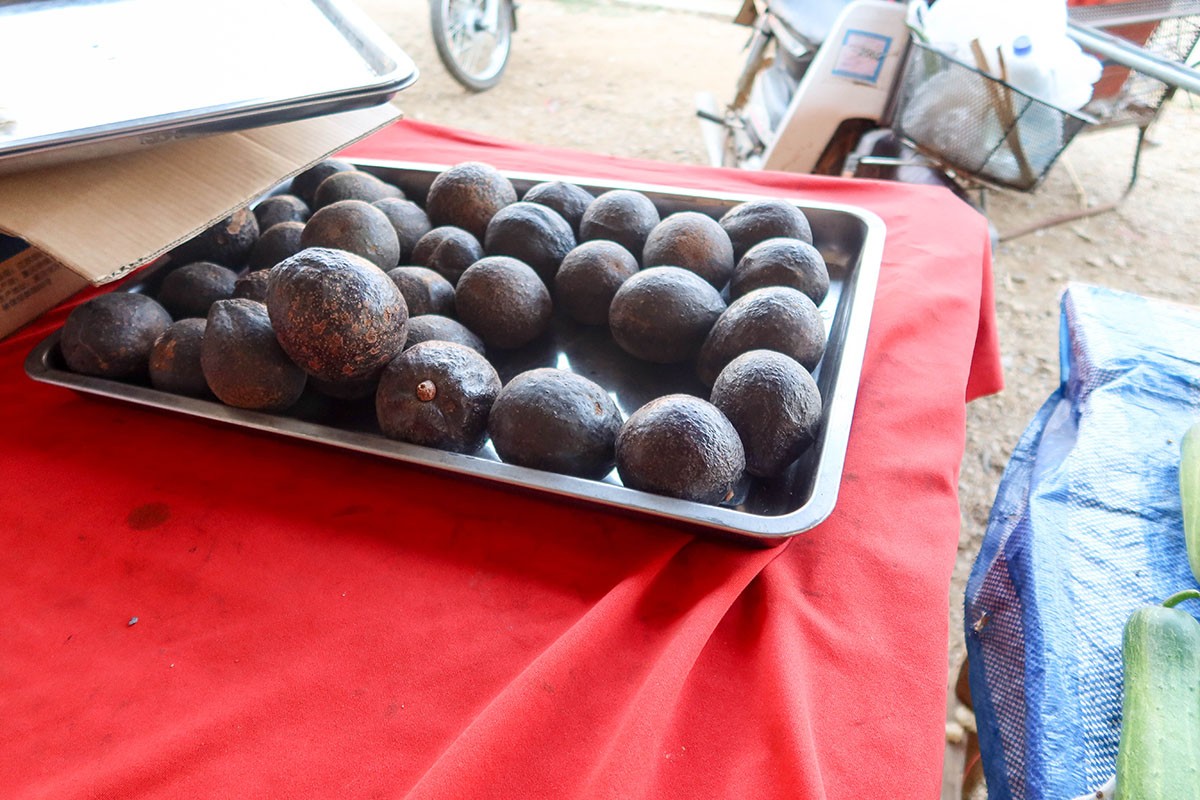 Travelling without eating meat can be difficult at times, but in Pong Nam Ron it was certainly not a problem. Jim does not eat meat either, so they had plenty of vegetable dishes for me to try and enjoy.

After purchasing some fresh vegetables at the market, we had dishes like fried eggplant, noodle soups, sticky rice, fried cabbage and spicy sauce. Everything was served on a sharing basis, so I could take as much or as little as I wanted.

How to Organise a Homestay in Pong Nam Ron 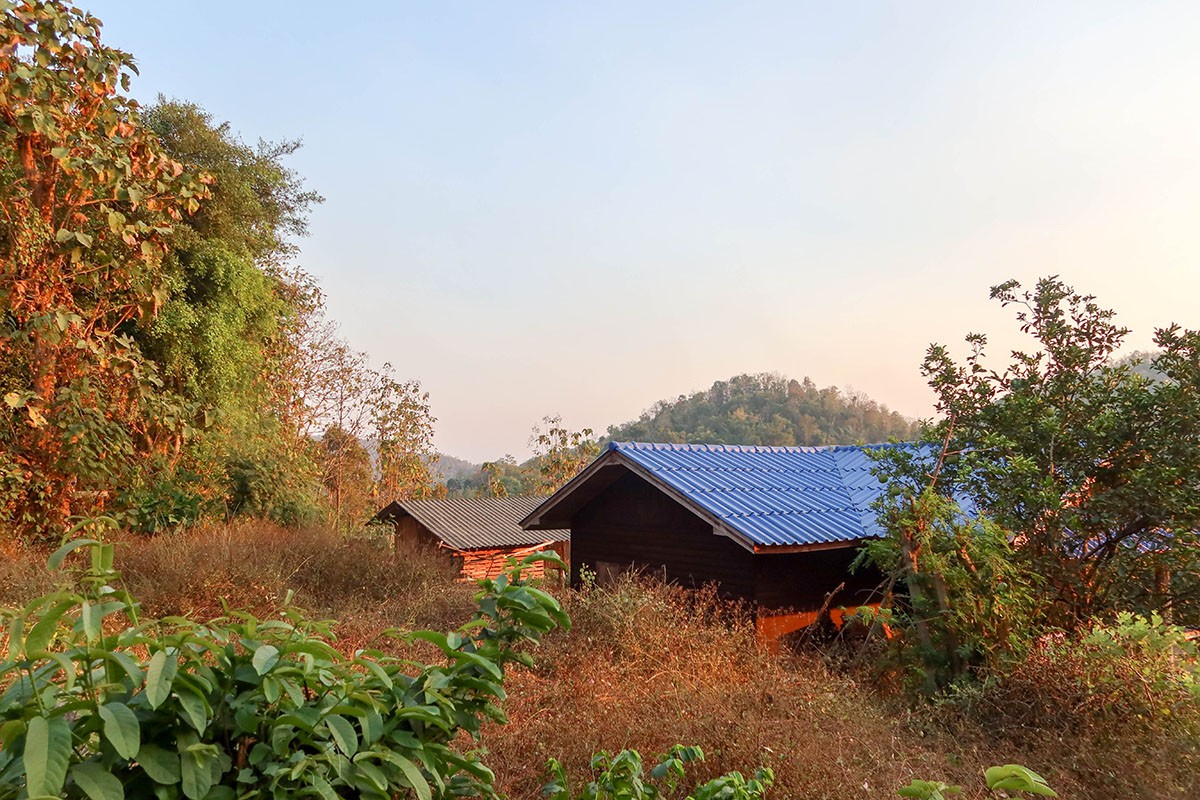 As mentioned before, my homestay was organised by Duara Travels. However, sadly, since my stay, Duara Travels have had to shut down. However, Jane is still keen to host travellers in Pong Nam Ron privately, and has agreed for her contact details to be added to this post so any travellers can contact her directly.

The best way to contact her is to message her on Facebook (this is how I communicated with her before I went to Pong Nam Ron) – her profile is here. 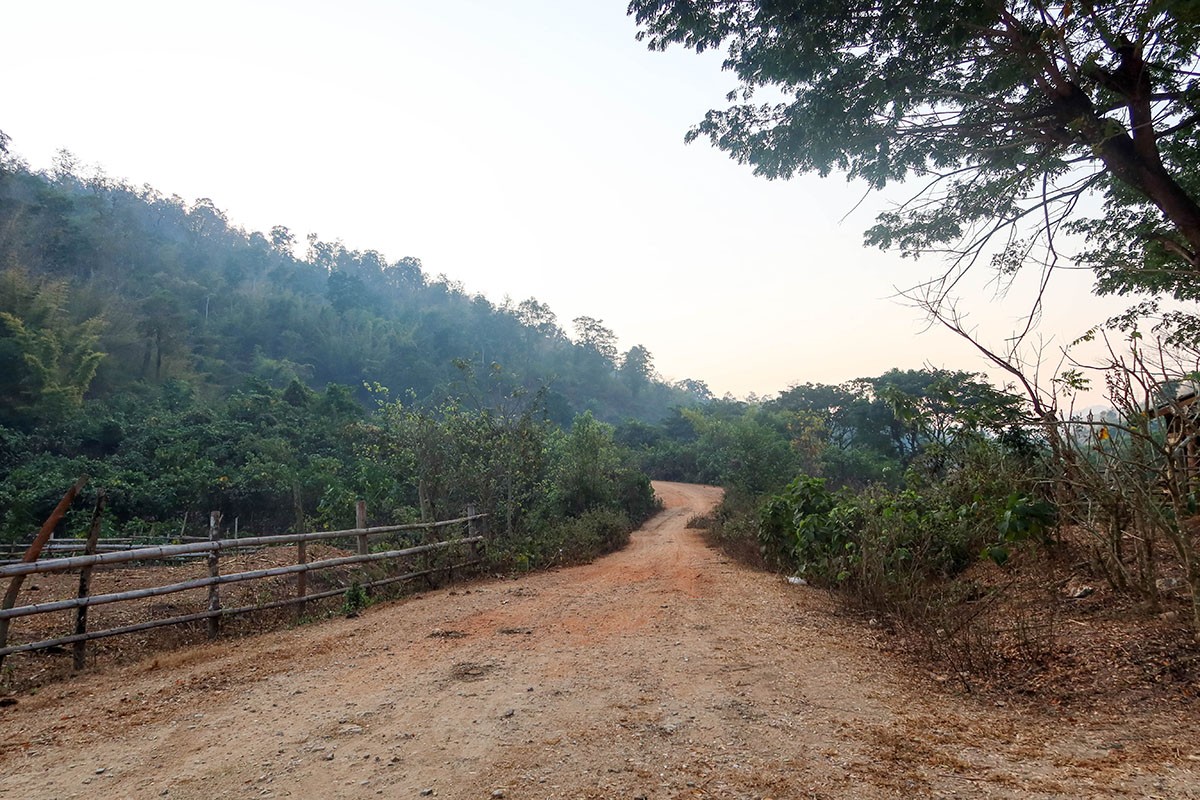 The two main tips I would give for a homestay at Duara Travels are to have an open line of communication with your host and to consider staying for as long as possible.

If all of this sounds appealing to you, send Jane a message and organise your stay – make sure you let her know that you found out about the Karen village homestay through my post!