When I first told people of my plans to travel as a solo female in Kazakhstan (or more specifically, to solo travel across the world, but we’ll just talk about Kazakhstan here!), a LOT of people were sceptical. Sadly, the only thing that a lot of people know about the place is that it was where Borat was from.

Fewer people know about the beautiful mountains, the modern cities, the excellent train networks (this is the kind of thing that gets me excited), and the amazing people.

Where I travelled in Kazakhstan

Now, I only travelled to Astana, Almaty, Aktau and between these cities. I can’t speak about solo female travel in more rural settings in Kazkakhstan, although I did meet people who had travelled all around and absolutely loved the experience. I didn’t hear any reports of people who had experienced danger.

Is Kazakhstan safe for travel?

Despite many people thinking the contrary, official advice generally points to the fact that Kazakhstan is safe.

It’s warned to not get involved in any political demonstrations (sensible in most places) and that you might need a permit to go to some areas (like the Russian-controlled space station).

But other than that, as long as you don’t irk the government, you should be fine. Kazakhstan has a very low rate of violent and non-violent crimes against civilians and tourists.

But what about for solo female travellers?

My experience in Kazakhstan 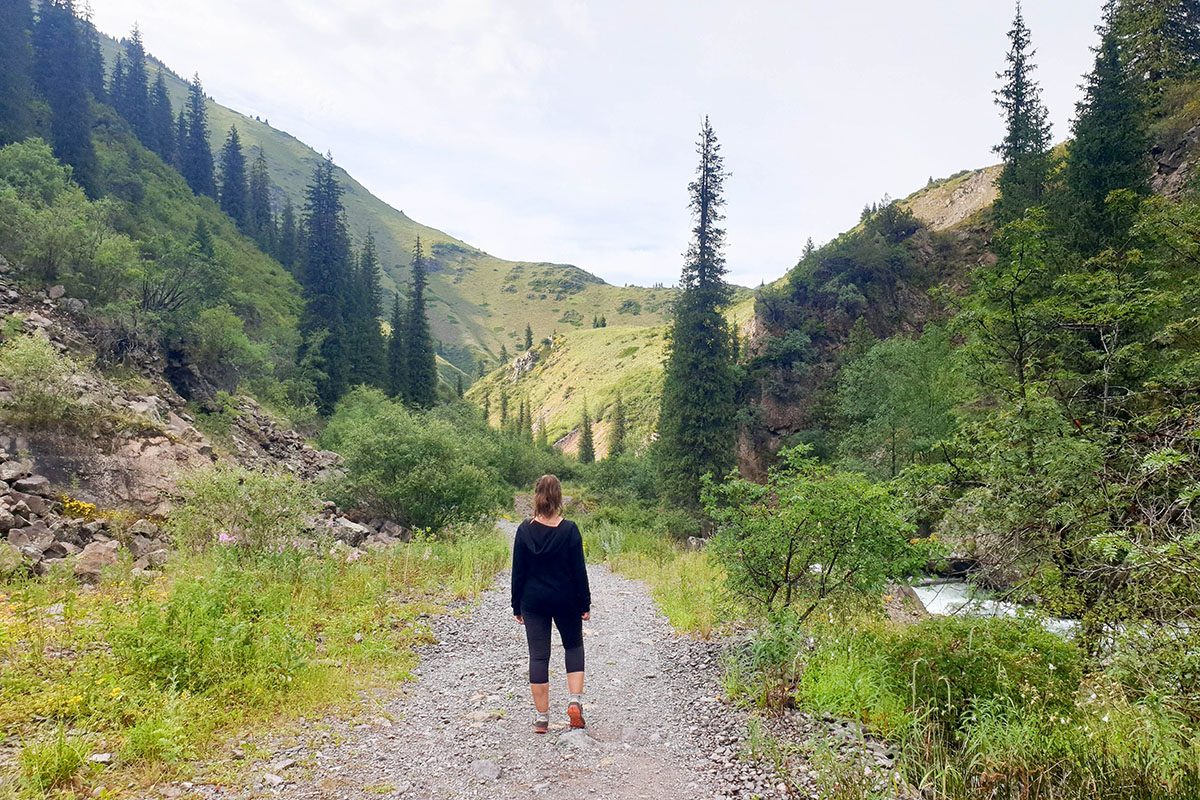 I arrived in Kazakhstan, to Nur-Sultan (Astana – the name recently changed and a lot of people aren’t happy about it) train station, at 2am.

This isn’t the kind of time I like to arrive into cities – I don’t even like being awake at 2am – but I didn’t really have a choice, there was only one train from Novosibirsk (this was part of my longer journey from Ulaanbaatar to Novosibirsk, and then Novosibirsk to Astana) every day at that time.

Because I was a bit nervous about arriving at a new country in the dark, I’d pre-booked a car with my hotel. The car was actually late, causing me a bit of stress – but other than that it went fine. But honestly, I think I would have been absolutely fine in a taxi.

The station was busy, there weren’t any dodgy characters or anyone who made me feel uncomfortable. A few people were offering taxis, but none of them gave me any kind of strange vibes and whenever I said no, they didn’t persist.

Walking around Astana for the next two days was very uneventful (apart from the fact that I got absolutely drenched in the most torrential downpour), and then I got a night train to Almaty.

The night train to Almaty was fine – I was in a cabin with a family, who looked like they would have rather had the cabin to themselves rather than a rogue backpacker who could only speak very broken Russian, but nevermind – and the attendant was helpful.

I happily checked out all of the best places to visit in Almaty and explored the local mountains, mainly solo, without any problems whatsoever.

I asked a local friend I made if Almaty was safe to walk around at night – she said that she personally doesn’t, but she has never heard of anyone having problems doing so. A far cry from many areas of London!

I left Kazakhstan for Uzbekistan but returned on a night train from Nukus in Uzbekistan to Mangystau in the western part of Kazakhstan.

Mangystau was a short taxi ride to Aktau, a city that sits on the Caspian Sea and where many travellers take a cargo ship to Baku in Azerbaijan.

Again, no problems here – although I did ask a local friend I’d made to negotiate the price. However, if I had been overcharged I think that would have been more of a tourist thing rather than a woman travelling on her own thing.

Aktau is a funny old place – a beach resort lined by Soviet architecture – but again, I didn’t have any issues walking around the town on my own.

I took a taxi (booked by the hotel, although Yandex, which is the Russian’s answer to Uber, would have worked fine as well – I just wanted to have a definite price as I had limited Kazakh currency on me) to the port at 3 am, and again, all went well – the taxi driver even parked up, helped me with my bags and found me somewhere to sit!

If you can’t guess by that little summary, I felt completely safe in Kazakhstan. However, I will note that I am a (somewhat) experienced traveller (although you wouldn’t think it by some of the mistakes I quite frequently make!), and that means that quite a few things don’t phase me that might others.

Solo Female Travel in Kazakhstan: Reasons Why It’s Safer Than You Think! 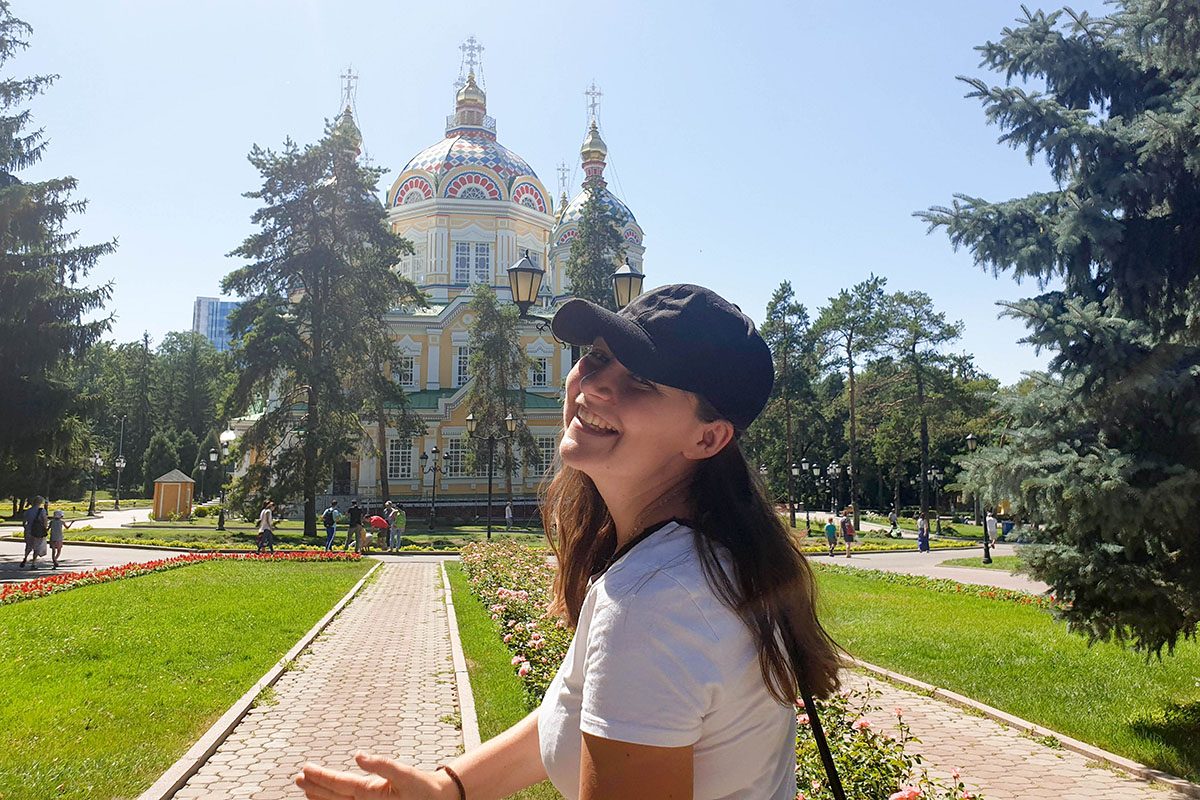 Solo Female Travel in Kazakhstan: Things to Watch Out For 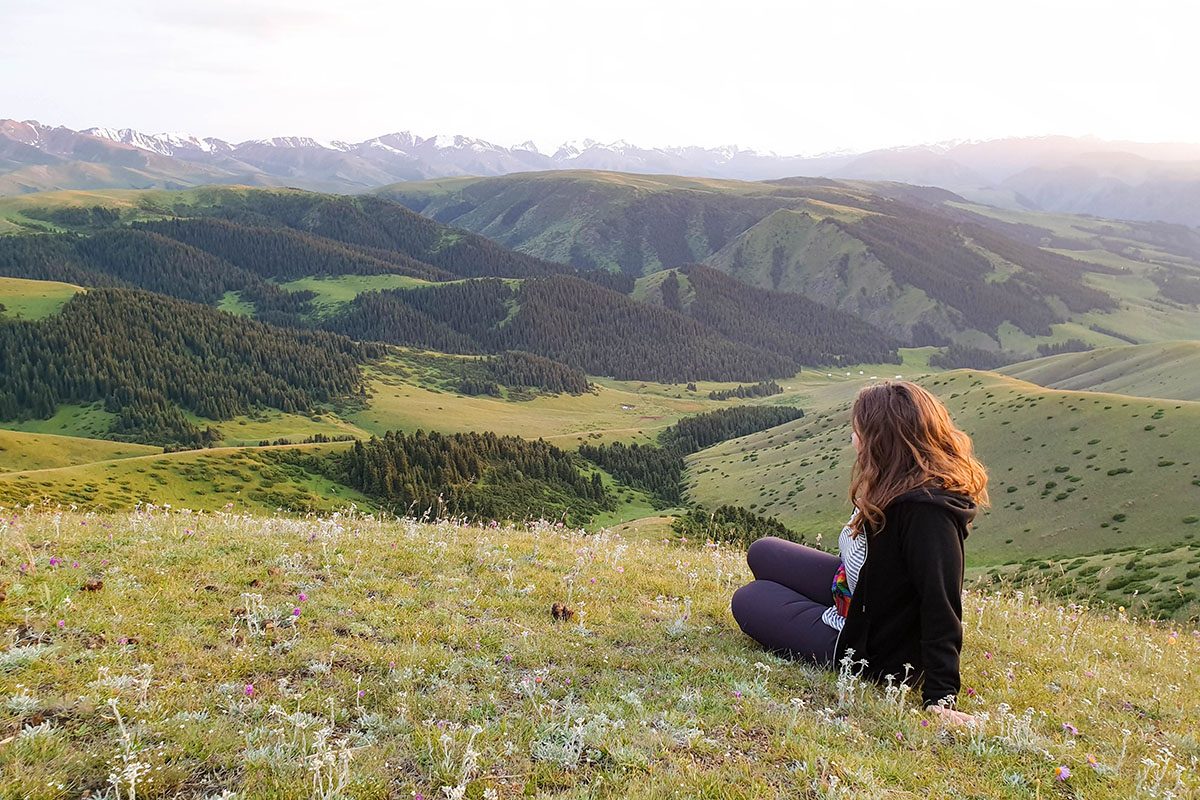 The main question that I was asked, all the time, was where my husband was. People with more conservative attitudes did seem to find it very strange that I was travelling alone. Depending on the situation, sometimes I told them that I didn’t have one, and I was just travelling alone – and sometimes I made up a fictional husband.

It’s a bit rubbish that we have to do these things, and I fully get why some women don’t want to pretend they’re married (I met a few girls travelling alone who refused to), but sometimes it does make life easier.

Regarding clothes in Kazakhstan, I erred on the side of caution and generally wore long trousers and long-sleeved tops, or the long dress pictured below. However, while Kazakhstan is technically a Muslim country it is very liberal. In Almaty especially, women and men alike wear shorts and headscarves are not necessary. In rural Kazakhstan, some women do wear headscarves, but that is generally for cultural reasons, not religious.

I used Yandex taxi app to get around – this works like Uber but it actually has some nice features that Uber doesn’t, like booking return journeys. It also translates whatever you type into Russian for the taxi driver and vice-versa. These taxis are registered and safe – they were all I used in the city. Megan Starr (whose blog is a goldmine of information for travel in Kazakhstan, definitely check it out before going) has some great tips to stay safe in Almaty’s taxis which you can read here, but the golden rule is that Yandex is the best way to do it.

Did I have any bad experiences when travelling in Kazakhstan as a solo female?

I had two experiences in Kazakhstan that made me feel a bit uncomfortable – and they both happened on trains, and the person who made the situation uncomfortable was a train attendant!

To be completely honest, I don’t think either of them had bad intentions, and I certainly don’t think that either of these incidents could have ended badly, but as I had my extra-safe solo female travel sensors on, I wanted to make sure that I avoided any possible ‘dodgy’ situations.

On one of these occasions, the train attendant used Google translate to ask me loads of questions, and after I told him about my fictional husband he asked me more questions about him, and then invited me for dinner, which I respectfully declined. He may have just been being hospitable, but I had a weird instinct and went with my gut.

The second time, a train attendant who had been very friendly and helpful started winking at me and following me around whenever I moved around the cabin. I firmly told him that I had a husband in Russian, and he then stopped being weird and resumed being polite and helpful.

Kazakh people are generally very warm, kind and hospitable. Out of the cities, there isn’t much English, but people who can speak English will go out of their way to make sure that people feel welcomed and at home.

I found Almaty a really easy place to make local friends – many people use Couchsurfing to meet travellers, and they’re very keen to practice their English. I also went on a local trip with a company called Steppe Spirit, where quite a few people spoke great English.

Elsewhere, I had to get by on my (pretty awful) Russian, but people were generally helpful and kind. 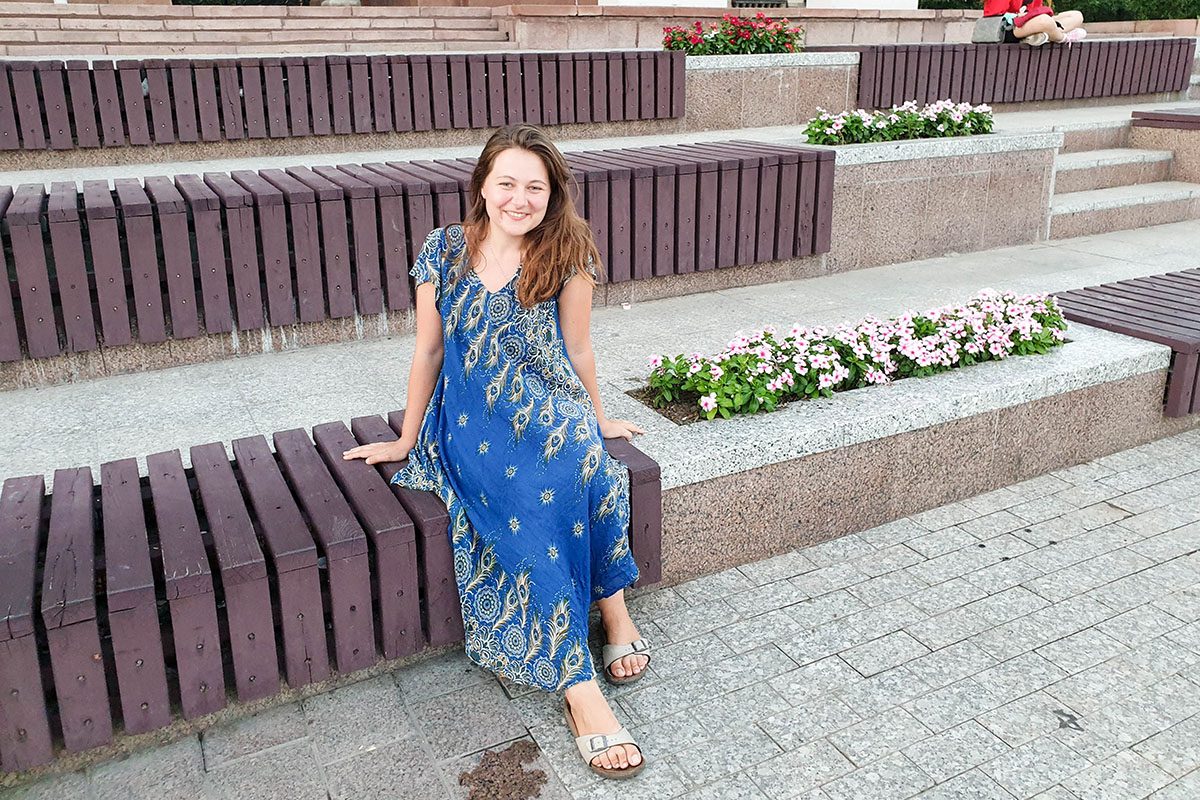 As I mentioned, I had to rely on a little bit of Russian to get me through travelling in Kazakhstan as a solo female. My Russian really isn’t great, it’s very basic, but I’m glad I knew a little.

I can do greetings, ask for some food items, prices, and a few other basic transactions. I definitely would recommend learning some phrases, and the Cyrillic alphabet, to anyone planning on visiting Kazakhstan.

I’d heard a few stories about police in Kazakhstan, but dealing with corruption etc, seems to be more of an issue if you’re driving. As a tourist using the trains, I wasn’t stopped.

This is the same advice as it would be for male travellers or mixed-gender pairs or groups, but obviously don’t do anything illegal in Kazakhstan.

The only time I dealt with dodgy laws was on the border. Again, this probably wouldn’t have been different if I was a guy or a mixed group, but it is worth noting. I was told by the border guard as I left Kazakhstan that I was in the country without a visa – which I knew was untrue and that I didn’t need a visa for Kazakhstan.

After insisting for about 15 minutes, the border guard eventually stamped me out of the country.

The advice I was given in this situation was just to stand my ground, which I did, and which worked. So I’d pass on that advice – but maybe also have your government website which says your visa situation print screened.

Also, you’re given a slip when you enter Kazakhstan. Do not lose this  – my friends actually did and were still allowed on the Caspian Sea ferry, but I’ve heard that border staff can give you a hell of a time if you don’t have it.

Kazakhstan as a Solo Female Traveller 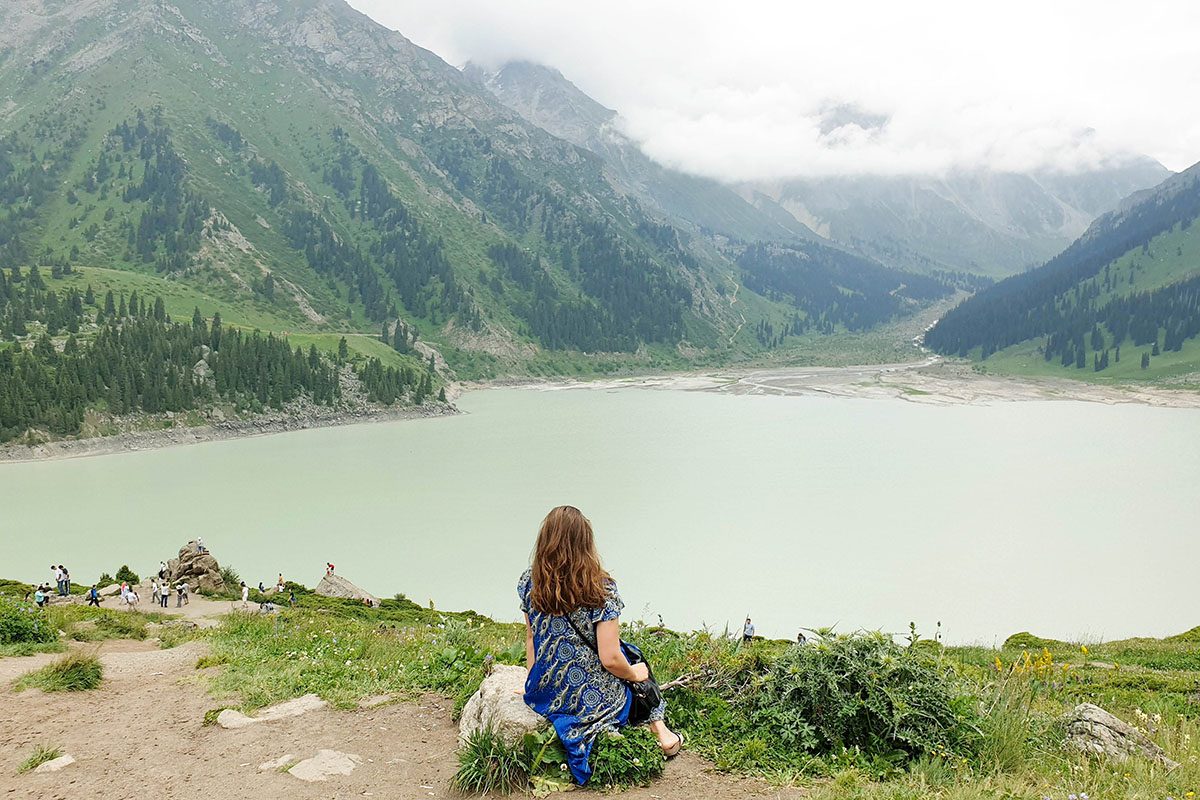 To summarize, Kazakhstan is pretty safe for a solo female traveller. People are very curious, and often disbelieving of why a girl would want to travel alone, and some men may be a little forward, but most are respectful and non-threatening.

Things to watch out for, like corrupt police fines when driving, and border scams, could happen to any tourist regardless of gender.

As I mentioned, this is based on my experiences in the cities and travelling between them, but as far as I’m aware, there aren’t any huge dangers for solo female travellers in more rural locations as well.

Take what I’ve said into account, and you should be absolutely fine in Kazakhstan. Obviously, everyone’s experience is different, and my being fine is no guarantee that anyone else will be, but I can hand on heart say that I felt safer in Kazakhstan than I do in many European countries.

If you have any comments or questions, do drop me a comment, and you can learn more about my overland adventure by watching the video below!

2 thoughts on “Solo Female Travel in Kazakhstan: A How to Guide”