Taking the Eastern Express Train from Kars to Ankara, Turkey

Travelling by train is my jam. I’ve taken trains all over the world – mainly on my trip from Bali to London with no flights – and it’s without a doubt my favourite way to travel. When planning my Turkey itinerary, I wanted to make sure that I saw as much of the country’s epic scenery as possible, and hopefully experience some famous Turkish hospitality as well.

But after spending a rather long time in Central Asia, and then drinking lots of Georgian wine and getting stuck in Tibilisi, I was actually slightly running out of time when I was travelling through Turkey from east to west. It wasn’t a huge deal – Turkey’s one of those countries that I’ll keep coming back to, and I know I want to do a big backpacking trip around the country at some point.

But, there was a way I could get a true Turkish experience and see some epic scenery as well – and that was to take the Eastern Express train.

The Eastern Express Train from Kars to Ankara 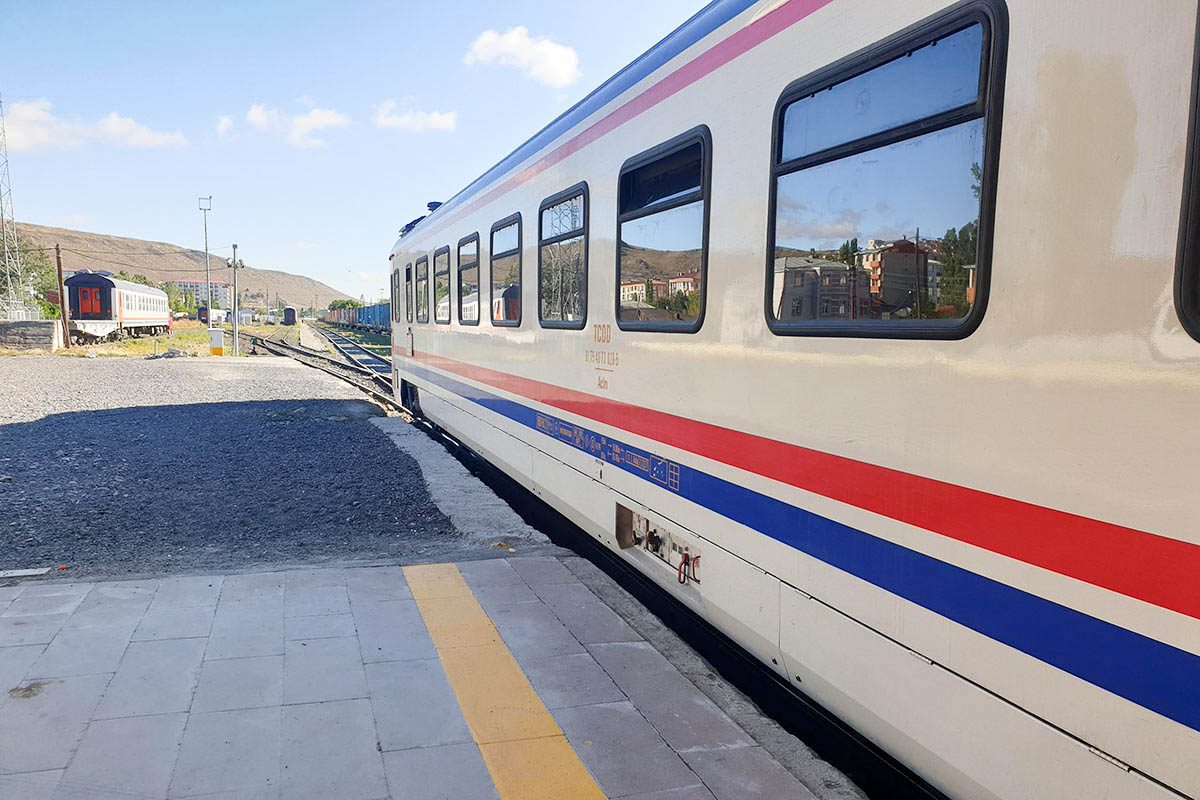 The Eastern Express, or Dogu Express in Turkish, connects eastern with western Turkey, spanning from Kars which is quite near the Georgian border to Ankara, the country’s capital. From here, it’s a quick 5 hour train or 7 hour bus to Istanbul and Europe.

The Eastern Express stops at seven provincial capitals as it heads east or west. You won’t see many other tourists get on this train, but lots of locals use it as transport through the country.

It takes about 24 hours, and for me was a couple of hours delayed. But in the winter it can take much longer.

The Eastern Antolia region is most famous during the winter for its snowy backdrops – yes, it does snow a lot in this part of Turkey in the winter – but honestly, I found the summertime journey mesmerizing as well. 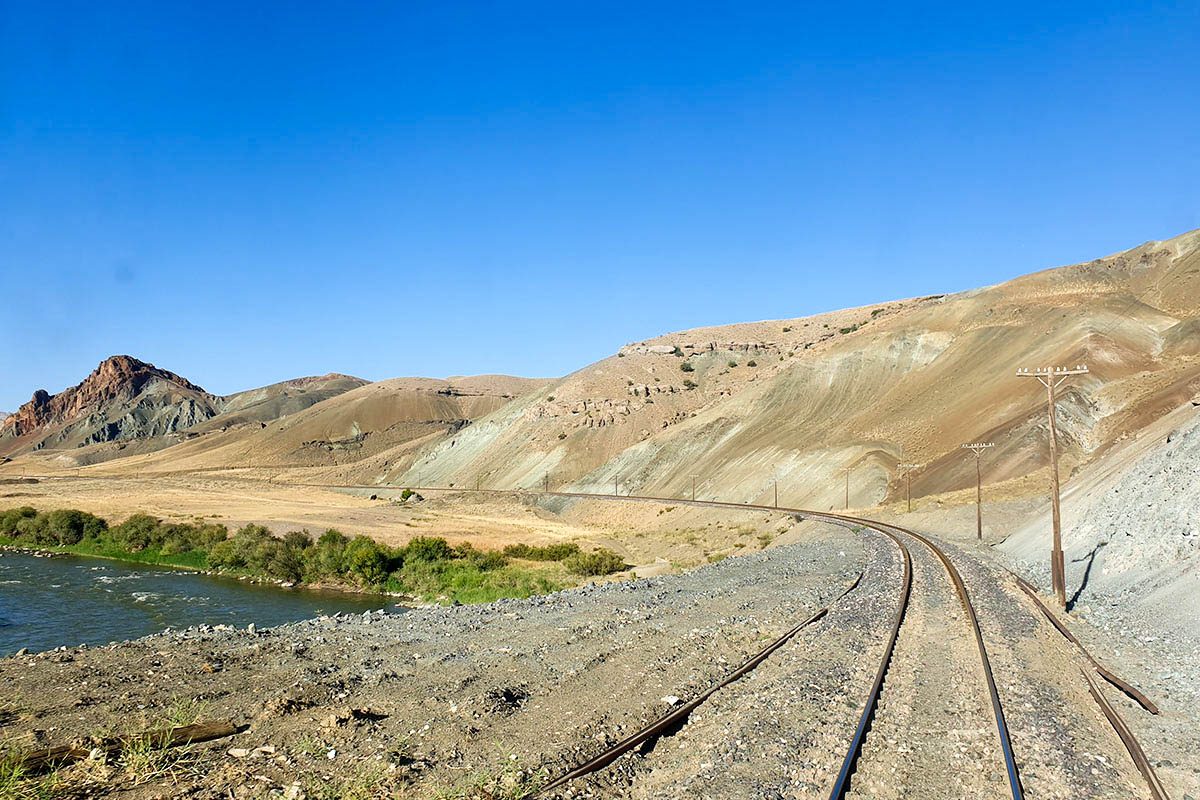 If you’re venturing east to west, as this guide illustrates, you’ll need to get to Kars. Turkey’s geographical position means that there are limited countries that you can enter the eastern part of the country from: even if you find yourself in Syria, you can’t cross that border, the Armenian border is closed. It is possible to cross the Iraqi border from Kurdistan – but a trip like this would take a lot of planning and would put you in a different part of Turkey to where Kars is located.

So, I’m going to write this based on the assumption that you’re crossing either from Iran or Georgia. Unfortunately, UK and US citizens can only visit Iran on a guided tour, so I haven’t been there yet – but I did end up taking a Tbilisi to Tehran bus, so I know that there is a bus connection between Tehran and Kars. As I haven’t done it, I can’t give too much information though!

I can, however, give you advice about travel from Georgia. Buses leave from Ortachala bus station – you can take a bus or Yandex taxi there. I went to the bus station a few days before I was planning on leaving, and was told that there was a bus leaving at 11am every two days. I missed one bus, then decided to not bother trying a more complicated route the next day, and went the following day.

When I got there, I was told that there was no bus to Kars from the company that I talked to before, but there was an Iranian bus going. This bus leaves every day, and the time seems to change but as of August 2019, it leaves at 1pm. It cost me 70 GEL, which was the same as it would have cost if I took it all the way to Tehran – apparently, there wasn’t anywhere else where someone could take my seat between Kars and Tehran.

The bus took about 4 hours to get to the Georgia/ Turkey border, where I was stamped out of Georgia and into Turkey – the border process was pretty self-explanatory and didn’t take too long. There was a duty-free at the border, where ever other passenger apart from me bought a bottle of vodka – I’m not all that sure why, but if you want cheap vodka, here’s where to look!

Then, the bus drove for about 3 more hours before arriving at a service station near to Kars. Here, the driver instructed that I disembark, gave me my bag, and asked someone working at the service station to call me a taxi, who then offered me three cups of tea (this is very normal in Turkey!).

It was about a ten-minute drive from here to Kars centre and cost me around 20 lira. I didn’t have any Turkish money, but the taxi driver happily stopped at an ATM after laughing at my ‘taking my money out of an ATM’ charade.

The whole process was pretty simple, and everyone was very friendly and helpful.

Things to do in Kars 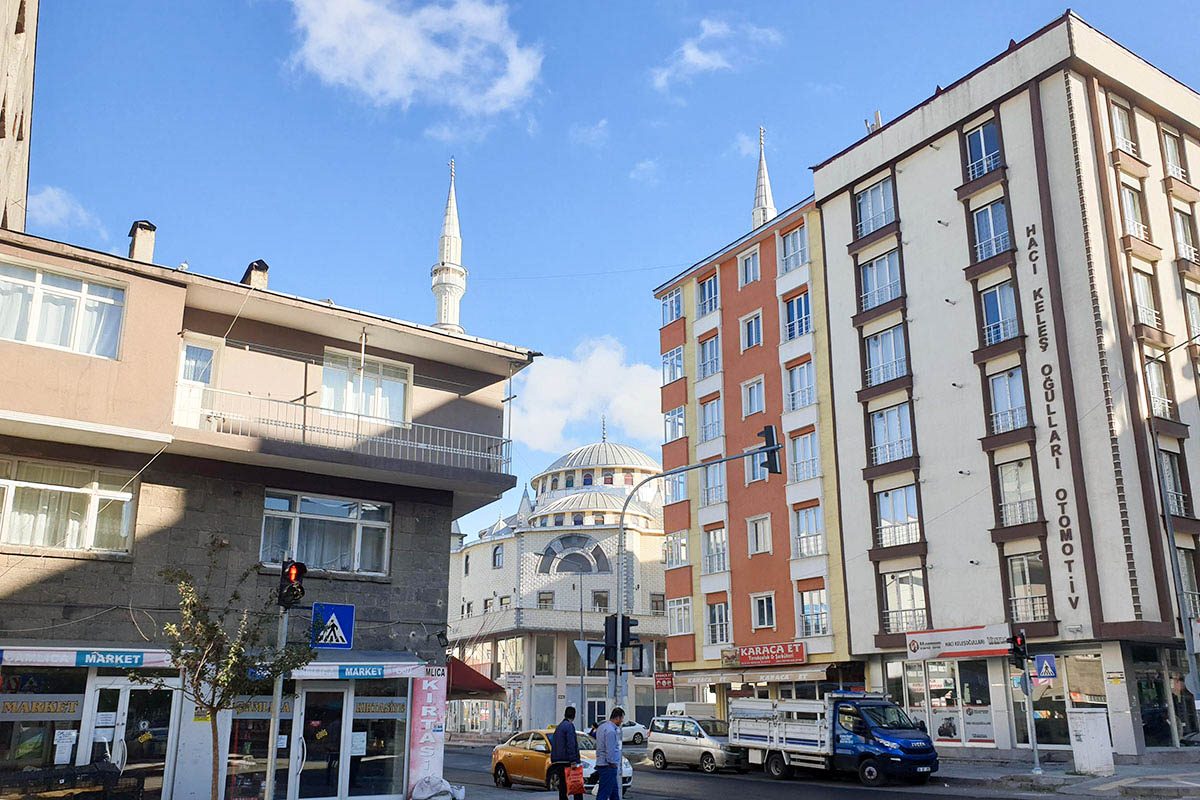 I didn’t manage to see much of Kars – Tibilisi has a habit of making travellers stay for much longer than they intend, and I ended up only arriving into Kars the evening before my train departed.

I did have a night walk around the city, where I was again offered copious amounts of tea, and had a delicious meal at Han-I Hanedan Cafe (again, they gave me tea and a dessert without charging me and said they were really happy that I was visiting Kars!).

However, if you manage to drag yourself away from Tibilisi, or have some more time in Turkey, there is one main tourist attraction near Kars – the medieval Armenian capital of Ani (which is located in modern Turkey, you don’t have to cross any borders!). It was my original plan to head there, but as I said, Georgian wine got me – so I’ll just have to return sometime.

Where to stay in Kars

Kars isn’t a hugely popular town on the tourist trail, but there are some places to stay and a few people can speak English.

I stayed in Kars Konak Hotel, which is right in the town centre. The rooms were clean and comfortable, and the buffet breakfast was good – it was all I needed for a night! Click here to read more about it.

Something slightly cheaper is Hotel Kent Ani, which has good reviews on Booking and includes breakfast. Click here for more information.

Why take the train from Kars to Ankara?

Taking the train from Kars to Ankara was top of my Turkey bucket list, and I knew that it was definitely something that I wanted to experience on my overland journey. There were a few reasons for this! 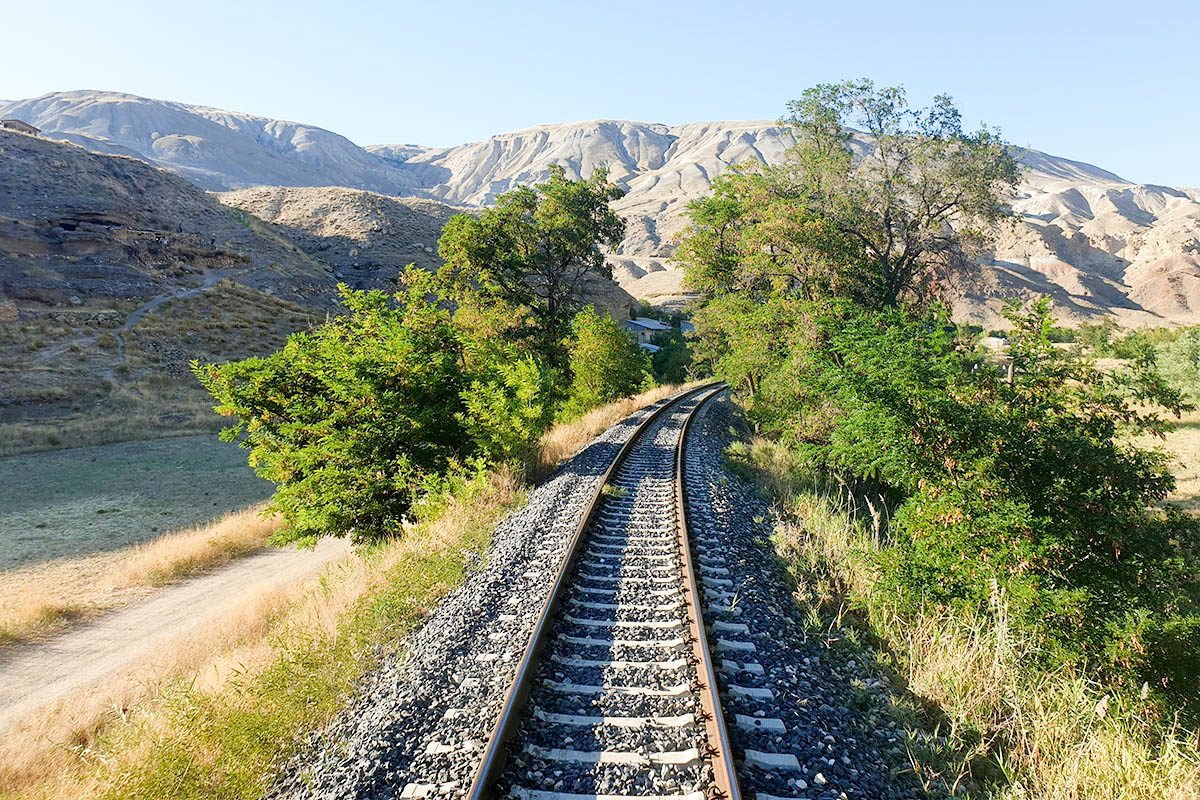 The main reason that I wanted to take the Eastern Express train from Kars to Ankara was for the SCENES. It was rumoured to be an absolutely spectacular journey; and it didn’t disappoint.

The journey is famous during the winter, as this area of Turkey gets very cold and it’s covered in snow. However, taking the Eastern Express train in the summer is also well worth it; you’ll get to see scenery like the below roll past.

I’ve taken many, many train journeys all over the world – but this was one of the cheapest. For a mere 45 lira, or about 7.50, I got overnight transport and travel for ? kilometres from Kars to Ankara by rail. The cabins are comfortable and clean, and it’s a fantastic value way to travel across Turkey. 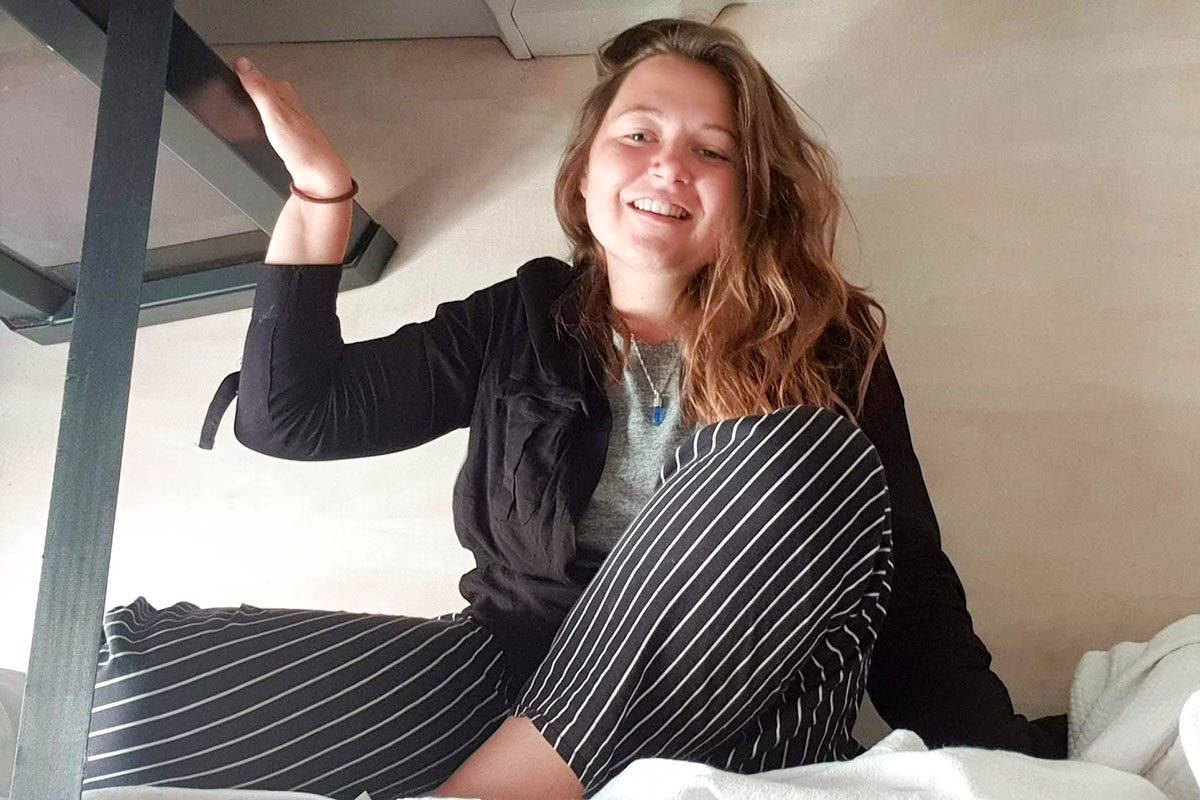 For me, train travel always trumps bus travel, just because it is so much more comfortable. You get your own sleeper, so you can stretch out much more than on a bus. The beds have mattresses and clean linen, and there are four berths to a cabin.

Set-Up of the Eastern Express 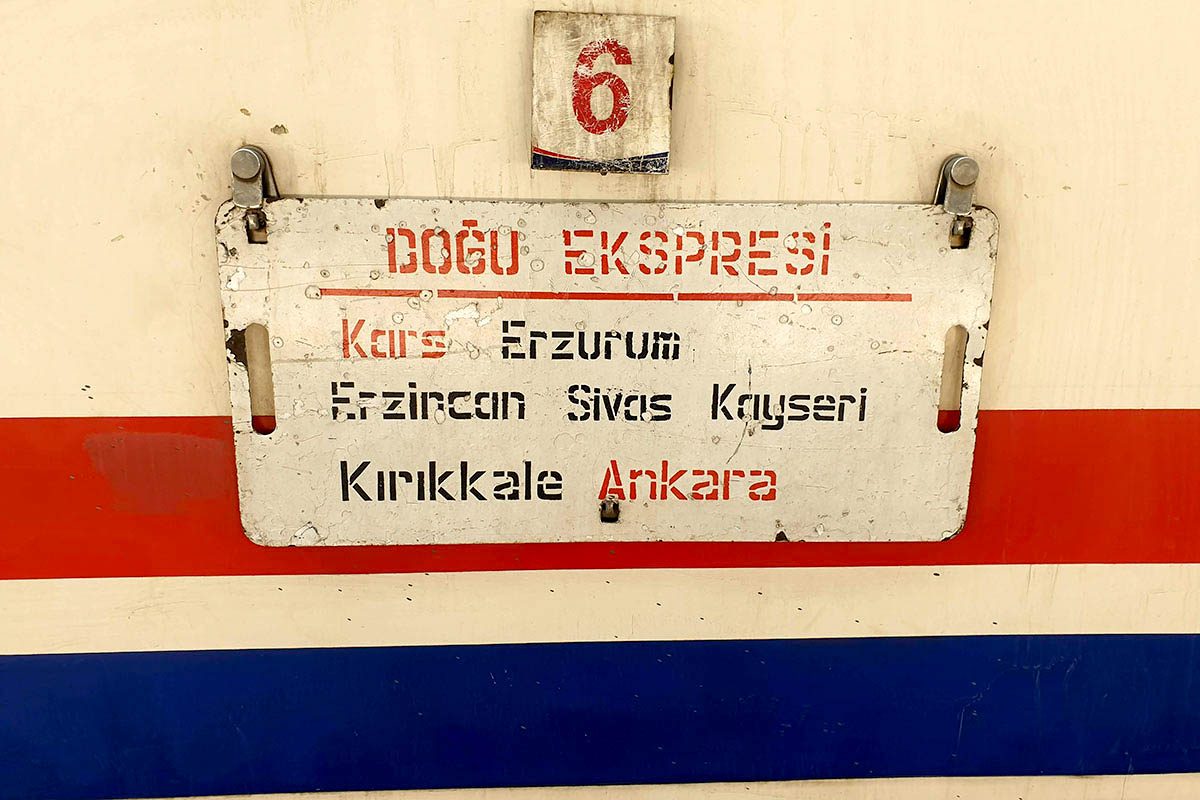 There are no open sleeper cabins like the Soviet Platzkart on the Eastern Express. You can either opt for a 4 berth sleeper cabin or an open sitting cabin. The seated seats are even cheaper, but I always go for a sleeper if available.

The sleepers accommodate four people, and don’t have all that much room for luggage – so I wouldn’t recommend taking huge suitcases on the train. I actually ended up sharing my cabin with a family of five (three adult women and two kids!) and a lot of their luggage; they were lovely, but it was a complete squeeze. They also, for some reason, decided to put up fairy lights at midnight.

The Eastern Express also has a restaurant, although when I went it had the slight disadvantage of not having any food. After a bit of questioning, a lentil cup o soup and a bread roll was brought out, which ended up being my dinner! There was, of course, unlimited tea at very cheap prices.

I made some friends in the restaurant; a lovely Turkish/ Omani couple who invited me to sit with them, and we passed time chatting about travel, our countries and life in general. As in many places across the world, I found that English-speaking locals were very keen to take me under their wing as soon as they found out I was a solo traveler! 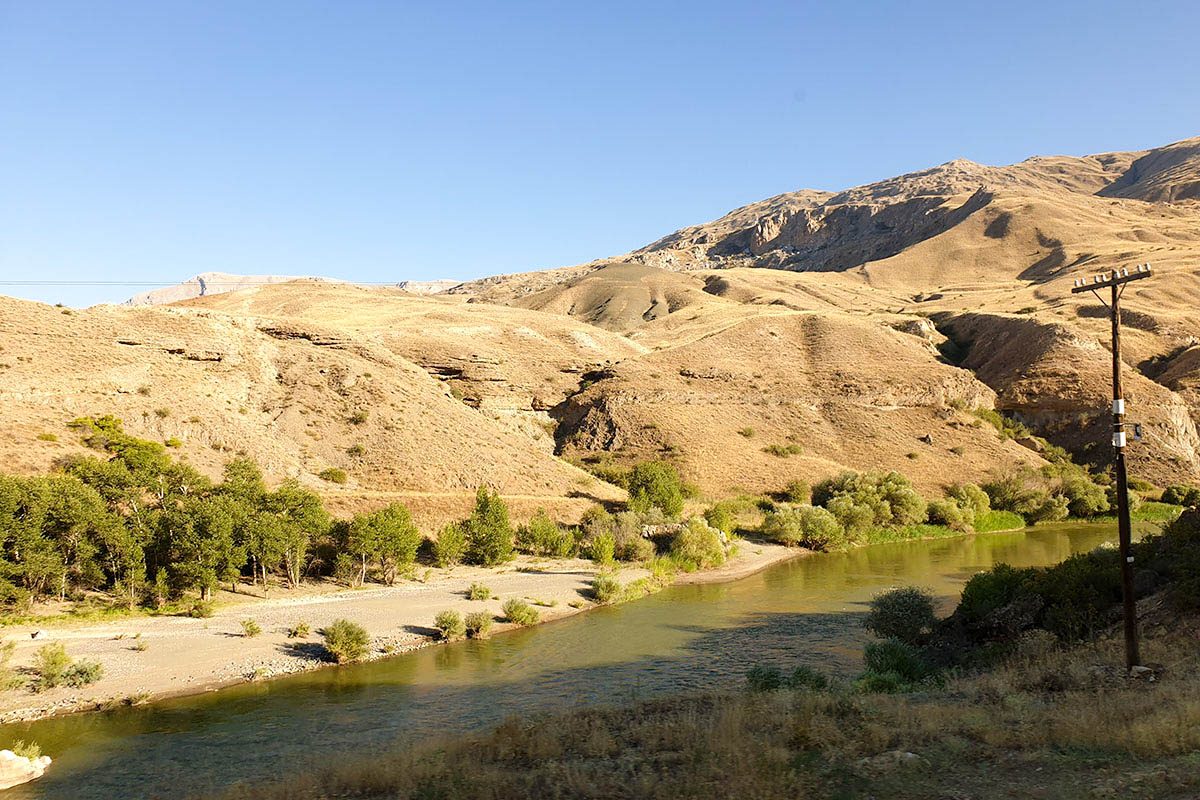 I absolutely loved this train, and although I didn’t get to see all that much of Turkey on this trip, it was a fantastic local experience. I met some great people, drank lots of delicious Turkish tea and saw some amazing scenery. I’d definitely add it to the list of the best rail journeys I’ve taken, and would encourage any keen train traveller to check it out!

4 responses to “Taking the Eastern Express Train from Kars to Ankara, Turkey”