“This is where the revolution happened”, my guide said. “If you walk over here, you can see the bullet holes in the building”.

We had just come to the end of a guided tour of communist Bucharest; and I had learned so much information in the past 2 and a half hours that I’d never find online. Before visiting Romania, I knew that the country had a Communist past and had been ruled by a dictator for over 20 years, but that was all.

Unlike other former Communist countries like the former USSR, and recent conflicts that that in Yugoslavia, there really isn’t much information available in English about the Romanian dictatorship and revolution.

While this isn’t a very nice part of Romania’s history, it is nonetheless really important to learn about. I strongly believe that learning about history is an intrinsic part of travel, and learning a country’s story – the whole story, including any not so pretty parts – is tantamount to understanding the country today.

And, I think that all tourists and travelers have a duty to make attempts to understand each country that they visit. It’s how we can make the world a better place through travel. 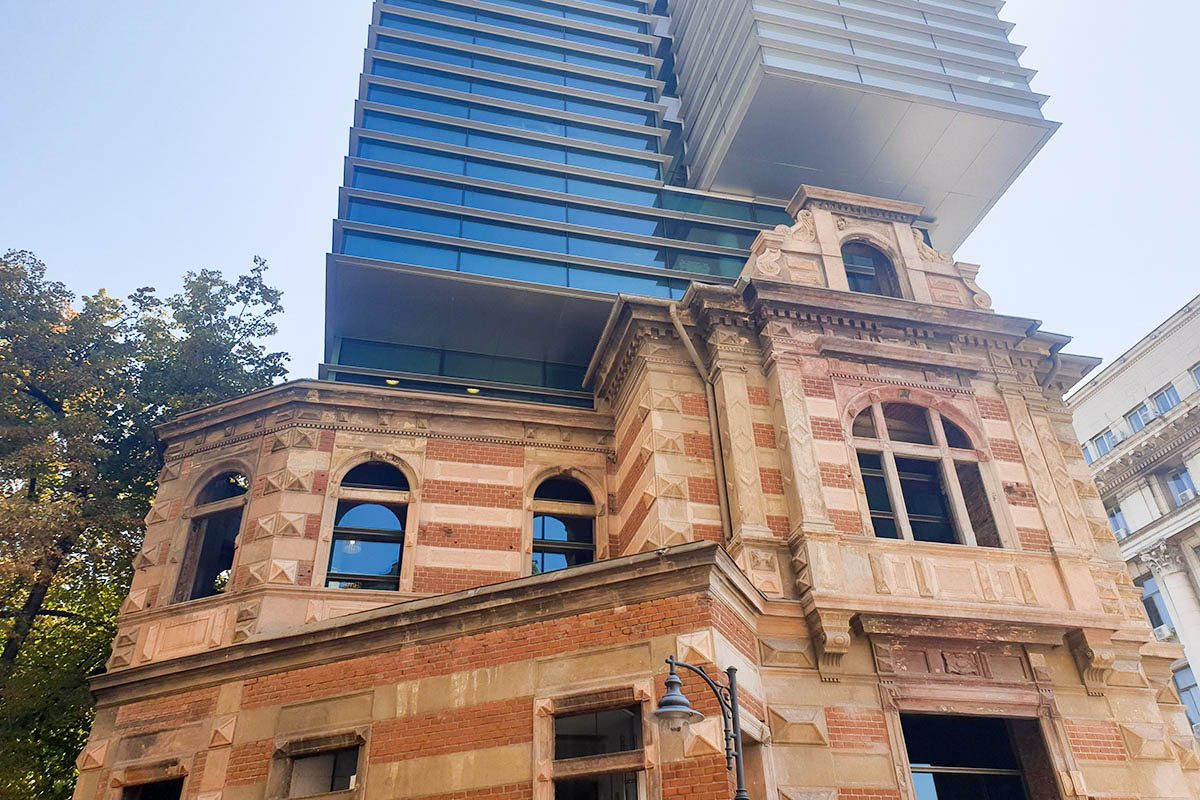 A Brief History of Communism in Romania

Communism in Romania existed from the end of WW2, when people became disfranchised with the Royal family, who were exiled to the UK, and sought a different way of living. Communism, which was already practiced throughout the USSR, became the political framework of choice.

Nicolae Ceaușescu became president in 1965; and very quickly, turned into a dictator. He and his wife wanted to be seen as idols, gods almost, and enforced a regime where there was no freedom of speech. He held rallies in his honour, to which enthusiastic attendance was compulsory, and jailed people who were overheard saying anything bad about him or his wife.

He paid off international debt, which sounds great; but the money that was used to pay this off was funding that should have gone into civilian’s basic needs. Food was rationed, people had to survive with only 2 hours heating a day in winter (when the thermometer in Bucharest drops to minus 20 degrees – and much lower in the mountains), and basic needs were not met at all. The Communist party banned religion and dislocated thousands of people to the edge of the city – often putting many families together in apartments only meant for one.

In the meantime, Ceaușescu and his wife lived in opulence, decorating their mansion in the most garish and over the top styles imaginable, and commissioning the largest boulevard in the world, as well as the second largest administrative building (after the Pentagon).

In the philosophy they preached, all people were equal, but the way that they lived showed the exact opposite….

There was eventually a bloody revolution, and the Ceaușescu family were overthrown, Nicolae and Elena executed, and the country became capitalist. But the scars do still show, and while Romania is rebuilding, there is still a certain amount of trauma that the country is collectively dealing with.

Why learn about communist Bucharest?

There are plenty of things to do in Romania that don’t involve its communist history. So why am I advocating learning about the country’s darkest hour?

I believe that these kind of things are part of travelling responsibly. I think that we do need to learn about history, especially recent history, because learning about the past of a country enables us to learn about the present of a country. As I mentioned, Romania is a country that is still healing, and by learning we can make sure that we treat the country and people with the uptmost respect.

It’s always important to learn about history collectively, so we don’t make the same mistakes in the future. By talking about these stories, we can develop as a society and build a better future for everyone. 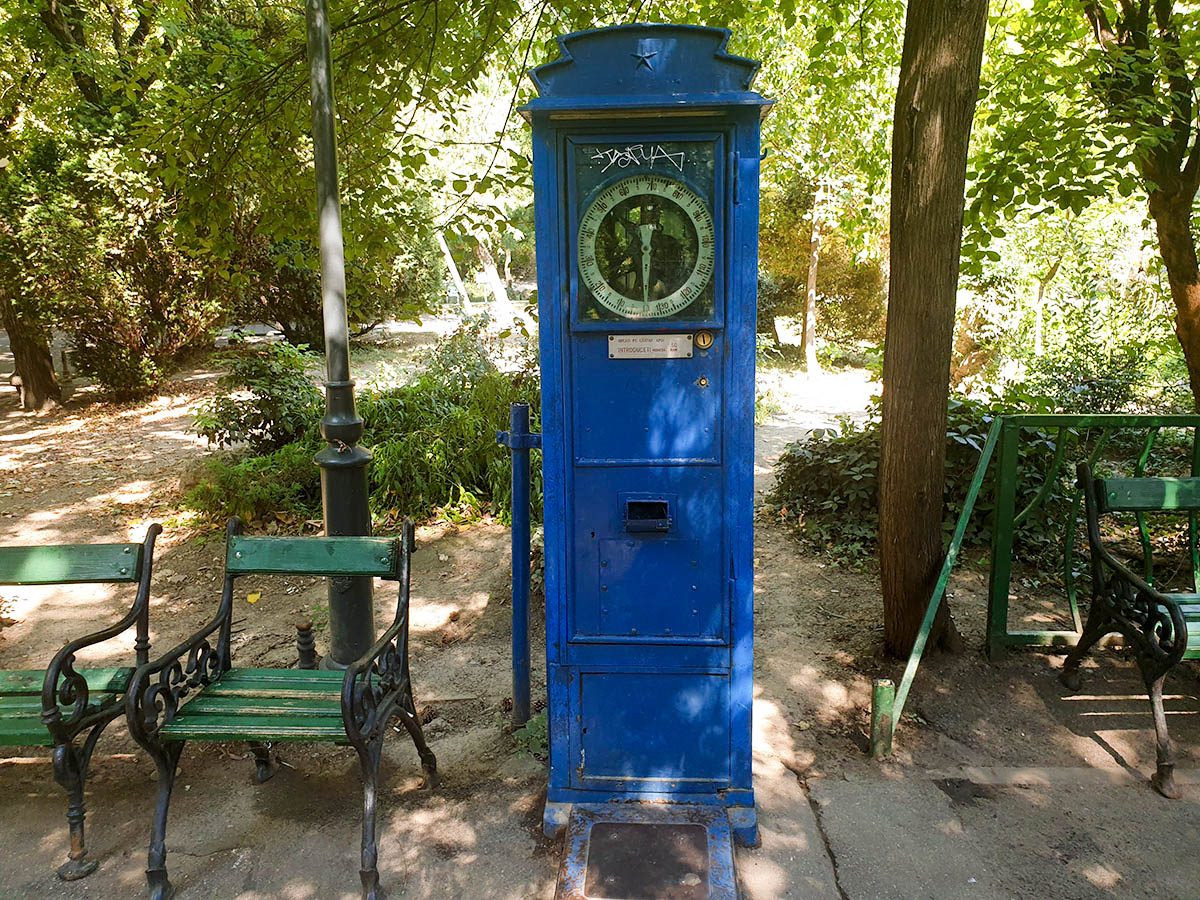 On a Bucharest communist tour, you can learn about all of this history in a lot more detail, while browsing some important landmarks that nod to the Communist past. Because the dictatorship only ended in 1989, the marks are still all over the city, but doing a tour with a local guide really helps you learn about the Communist stories in Bucharest.

The tour lasts around 2 and a half hours and explores landmarks like:

And a guide who knows all that there is to know about Communist Bucharest history.

You can find more information about the tour and reserve it by clicking here.

I was invited on the tour as a guest, but I’m always going to be honest here, and I highly recommend it to anyone. 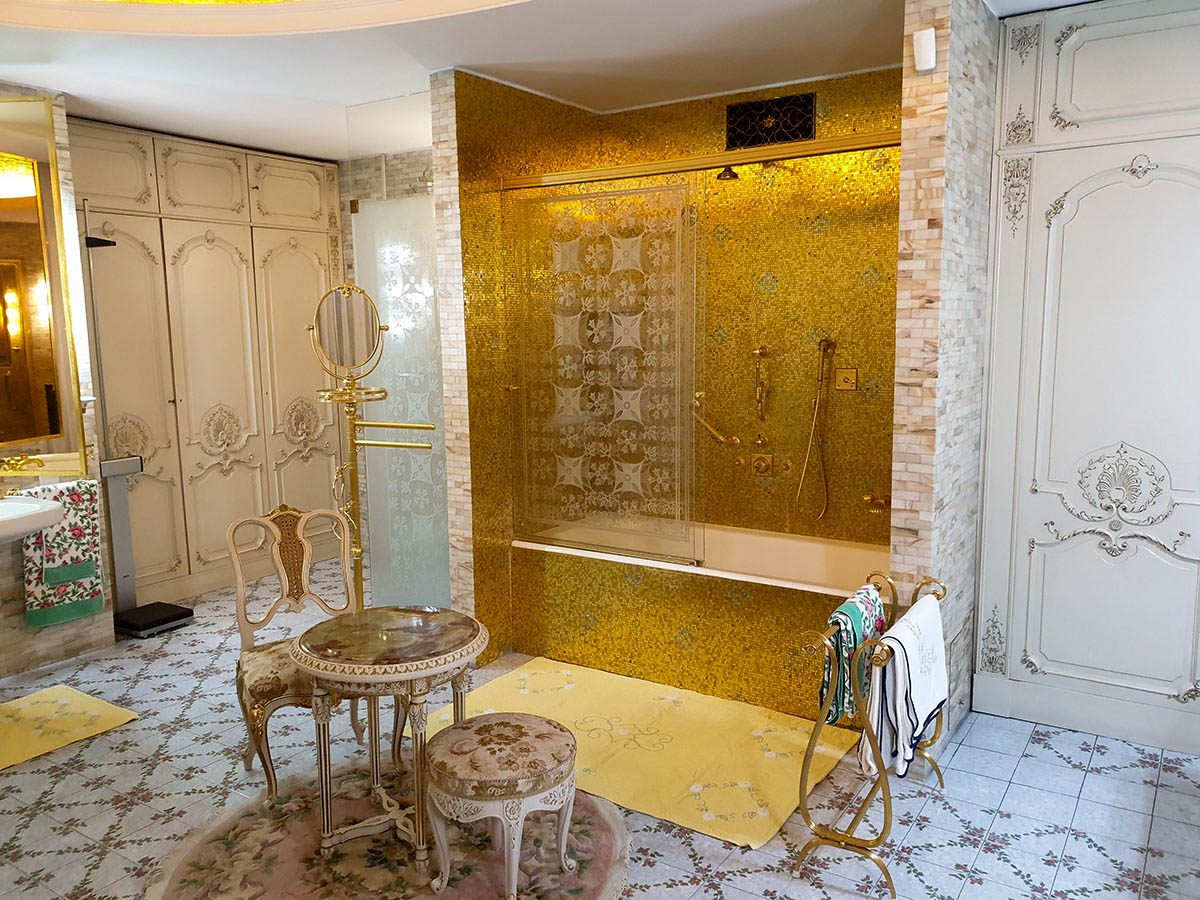 Another communist Bucharest attraction is the eerie former home of the Ceaușescu family. It’s pretty much as they left it in 1989, shortly before they were assassinated by firing squad. Tours need to be booked in advance (ask a tour guide, someone at your accommodation or even someone in a restaurant to call for you, most people are happy to help) and cost 50 Leu. 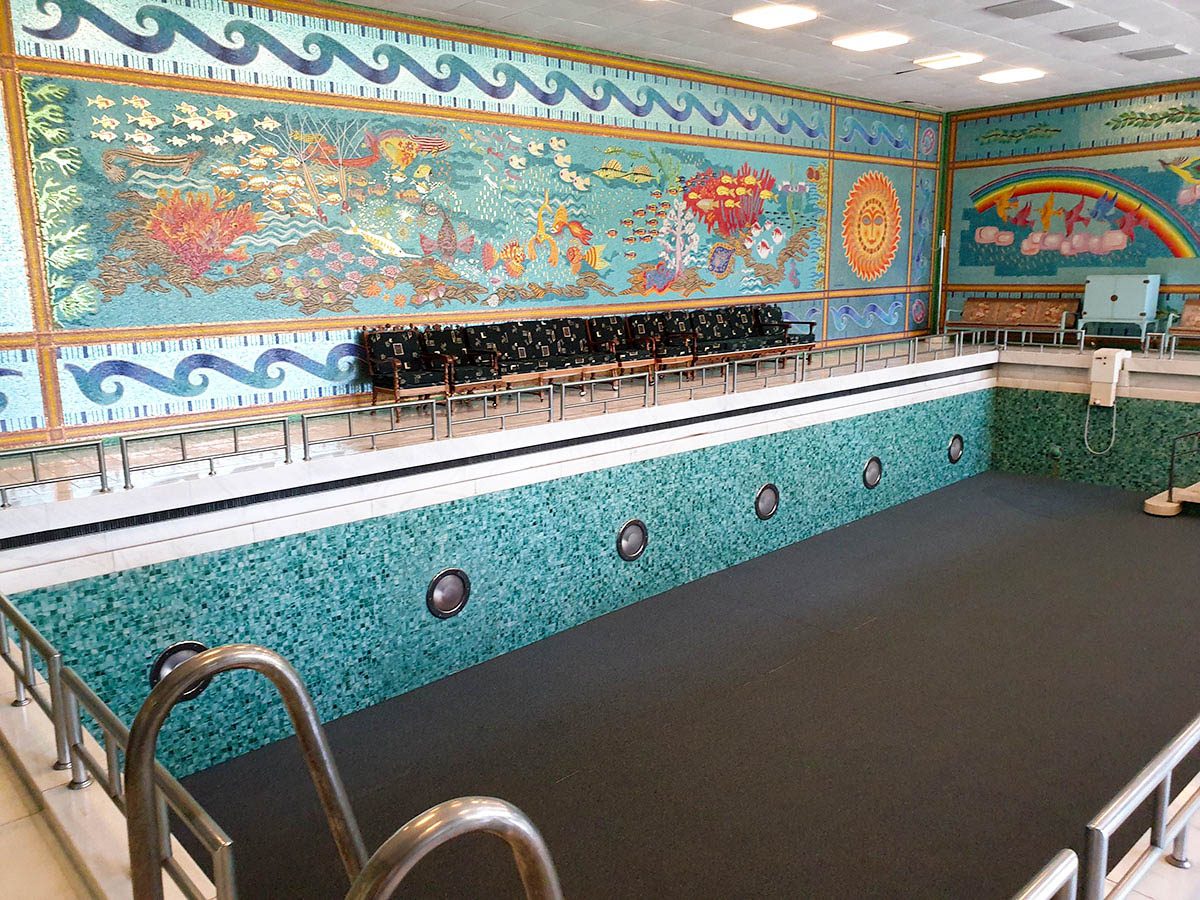 You’ll be taken around the mansion by a knowledgeable guide, who will tell you all about the Ceasascu family’s life and how they lived. Contrast this with how they were perpetrating Communism onto all the people of Romania at the time, and you’ll notice some hypocrisy… it’s downright shocking how opulent their lives were while so many others lived in such poverty. 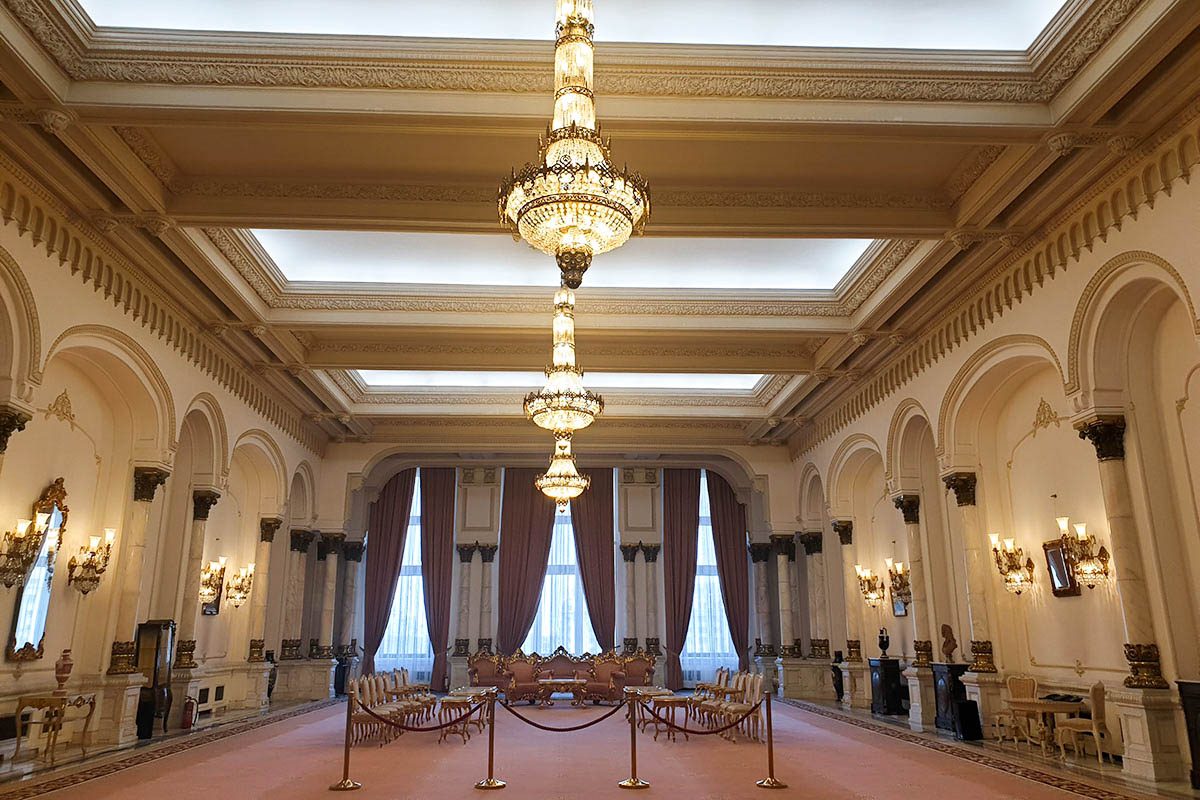 The Presidential Palace was built on order of Ceaușescu. He wanted a domineering building in which to rule the nation, so created the second biggest building in the world. It’s absolutely huge, and is incredibly intimidating from whatever angle you look at it.

The building of this monstrosity caused the displacement of forty thousand people – more than any earthquake, fire or other natural disaster. They were moved from desirable houses in the city centre to drab apartments on the outskirts, of course with no financial aid, because they were ‘doing their bit for the nation’. 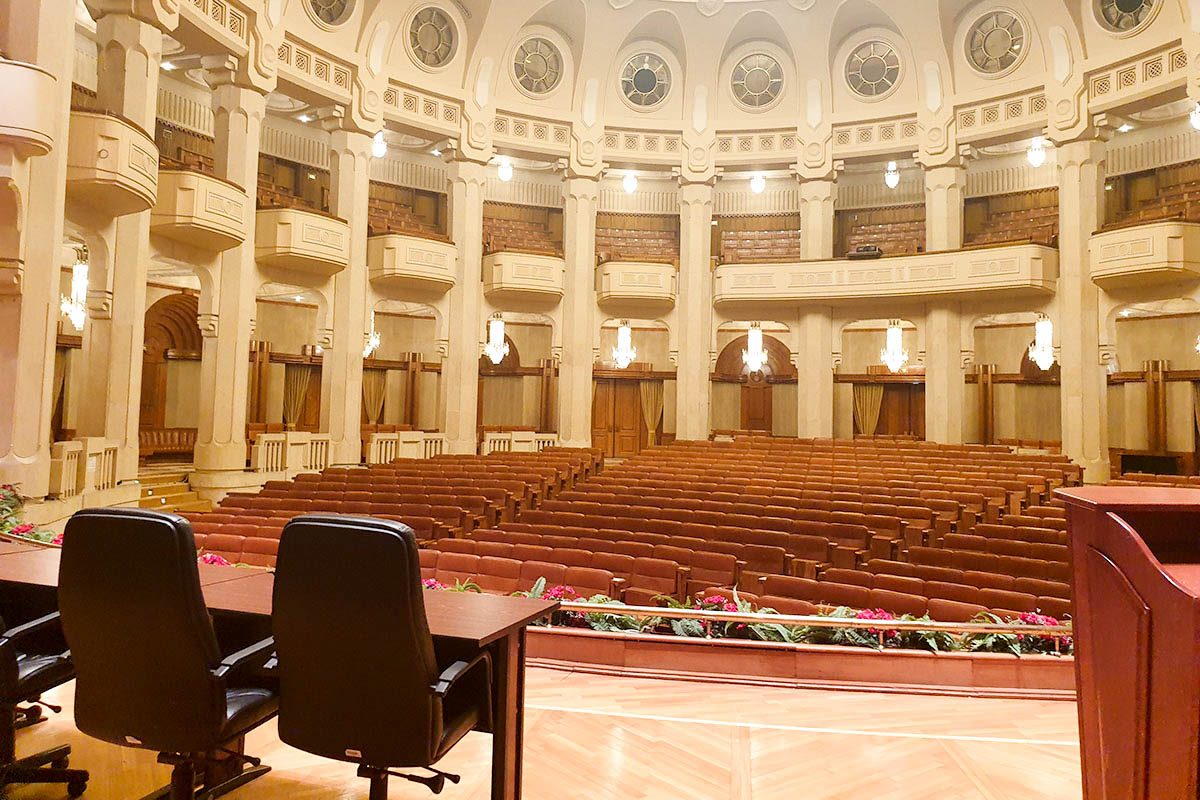 Ceaușescu never actually got to see the building finished; the revolution and his subsequent assassination happened prior. It is still used today as a parliamentary building and tourist attraction – although a huge percentage of the palace remains unused.

Some Bucharestians appreciate the building and the tourist money that it brings to the city – others hate it, as it reminds them too much of so much suffering that one man perpetrated on the city. 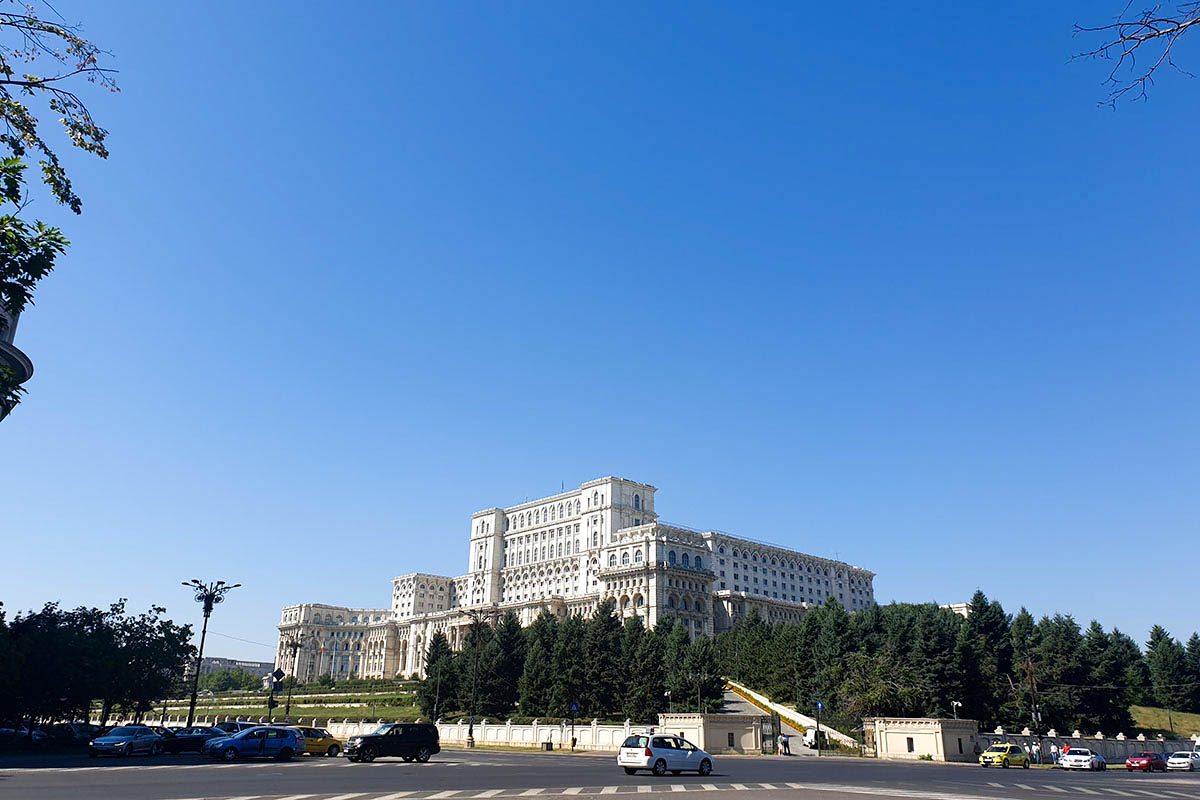 All of these places/ activities are worth doing to learn a little more about Communist Bucharest, but it is important to always be considerate to when learning about this aspect of Romania’s history. Many Romanians have had their lives forever altered by Ceaușescu and his actions, so I would advise to ask questions to your guides, or wait until someone brings the topic up before broaching it.

Some Romanians are happy to talk about this part of their country’s past, but some would – understandably – rather focus on the present, future, and happier times in the past.

Where to Stay in Bucharest

Hostel: I stayed in the Cozyness Hostel while I was in Bucharest. It’s a hostel set in a house, and is indeed rather cosy – there’s a kitchen and lounge, and dorm rooms upstairs. The dorms are a little basic, but comfortable enough. It’s walking distance to central Bucharest (about 20 minutes). Click here for more information.

I was planning on staying at Podstel Bucharest, which has very high ratings and is known as the most social hostel in the city, but it was fully booked while I was there. Click here to read about it.

Budget Hotel: Hotel Michelangelo has spacious rooms and is located close to the railway station and city centre. It has comfortable beds and good WiFi, and is great for solo travellers who don’t want to stay in a hostel, as it offers single rooms. Click here for more information and to book.

Mid-Range Hotel: Check out RIN Central Hotel, which is right in the centre of the city. There is a restaurant and bar on-site, and the hotel offers room service. The rooms are spacious and furnished well. Click here to read more and to book.

Luxury Hotel: For a luxury stay in Bucharest, Hotel Lido by Phoenicia is an excellent option. It’s a historical hotel with a mix of period decor and modern features. The rooms are some of the most luxurious you’ll find in the city, with plenty of extra features to make your stay in Bucharest absolutely delightful. Click here for more information and to reserve your room.