DID YOU KNOW? Capsule hotels are the new 5* hotels.

Ok, I may have just made that up (and tbh, would rather stay in the iconic Marina Bay Sands Hotel than any capsule hotel). BUT Capsule Hotels in Singapore are pretty awesome. I recently stayed in two while visiting Singapore, and I highly recommend them.

So, what is a capsule hotel, I hear you ask. It’s a cross between a hotel and hostel. You get your own ‘pod’ rather than a room, which is in a room with lots of other pods, BUT you’re completely closed off from the room. You have your own lighting, electricity, mirror, table and sometimes even a TV.

As it’s space-saving, it’s a lot cheaper than hotel rooms, but you get privacy that you don’t have in hostel dorm rooms.

So basically, it’s perfect if, like me, you’ve become a bit jaded from hostels but don’t necessarily have a hotel budget. It’s one of the best ways to visit Singapore on a budget.

The first capsule hotel in Singapore that I stayed in was in Kampong Glam. This hotel is just off Arab Street, making it an ideal location to enjoy this dynamic area of Singapore.

Arab Street does have a lot of bars that cater to tourists, so this is in one of the lively backpacker areas of Singapore.

The capsule hotel is pretty much just a small reception and then the rooms with pods – there is no common area. There is, however, lots of information about the hotel and nearby attractions on desks on each floor.

The hotel is quite busy – when I tried to extend my stay it had sold out, which is why I moved locations.

Anyway, when I got there I was taken up to the pod room and shown all of the JAZZY features of it. You get given a card that’s used to open everything (the main door, your pod room door, your pod and your locker) so it’s super safe.

On the inside, there is a panel wiiiith: 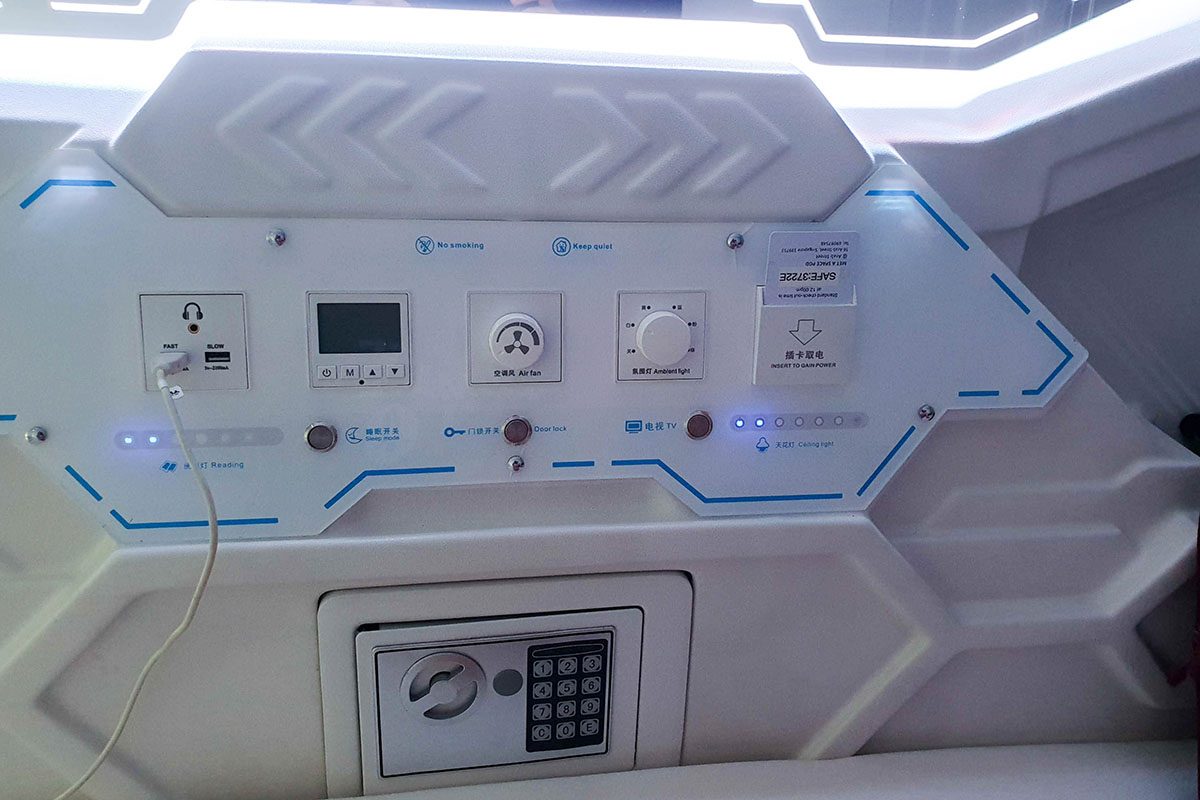 Other features of the pod include a table, a TV, fresh white linen and a fresh towel. It manages to be futuristic yet cosy at the same time, and it’s bladdy lavely.

Moving into the bathroom, there were cubicles with showers and toilets. Most of South East Asia has toilets and showers within one cubicle, and here is no exception. I don’t love this – I don’t know why but I get a bit funny about using a wet toilet, even though I know it’s only water – but it’s pretty standard for the region. The showers were great, powerful and warm and the whole area was very clean. There was shampoo and shower gel available, in dispensers.

Then there was the storage room – you’re not expected to keep your luggage in your pod, and you’re appointed a locker which is very handily opened with your keycard.

All in all, the features are pretty excellent – they are communal, but are definitely of higher quality than you’d get in lower-end hotels.

So, how was the sleep in the pod? 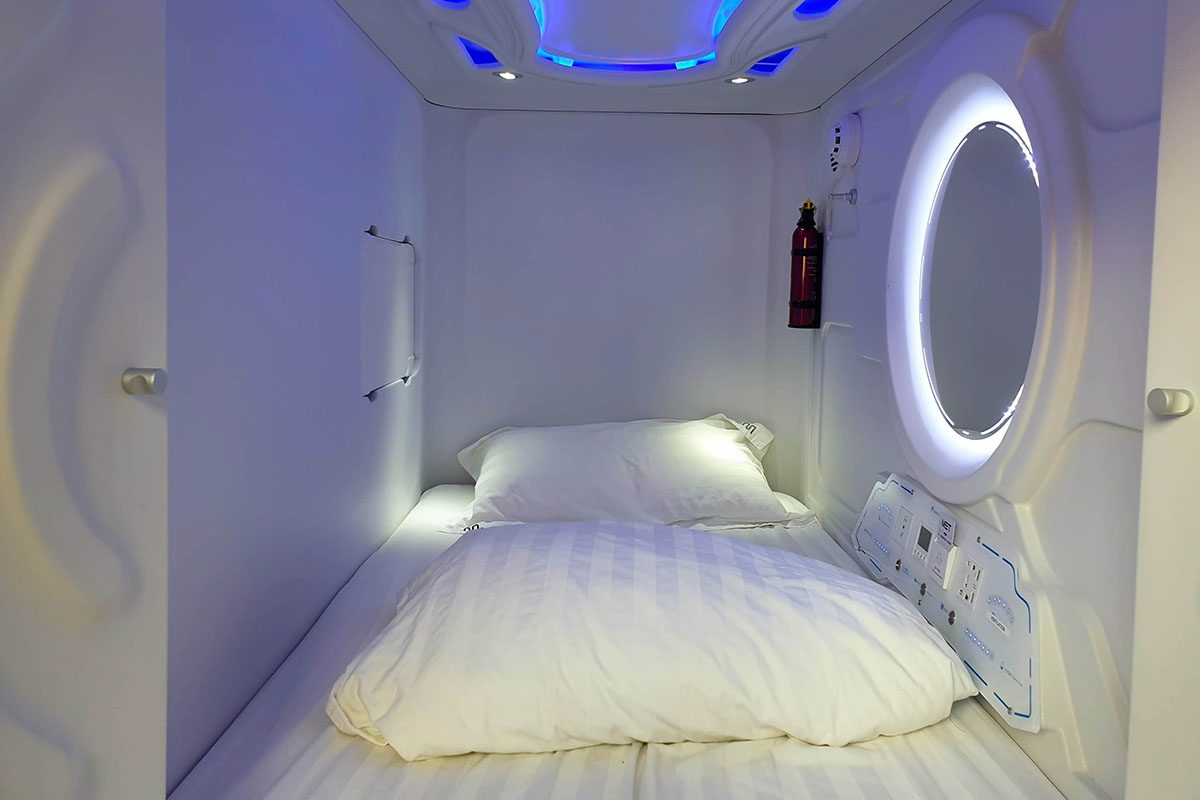 The first night, I was shattered (I’d just done a 12 hour trip from Pekanbaru in Sumatra which involved 4 boats and a bus, and two days before that I’d been on a bus for 60 hours from Jakarta to Pekanbaru… I was zonked!) so I slept pretty quickly. I could hear a bit of a buzz from people’s TVs but I put earplugs in – there were some provided complimentary, but I had my own and didn’t want to waste unnecessary plastic as they were individually wrapped – and couldn’t hear anything. I slept through until morning – quite late in the morning at that!

The next night was a bit of a different story. Some guys checked in while I was chilling in the pod in the afternoon – and as soon as I heard their voices I thought ‘oh no. They’re going to make loads of noise’. Sure enough, after I got back from Gardens By The Bay, they were sitting in their lower pods, drinking and chatting. No problem at 9pm, but when it got to 11pm – I wanted to go to sleep. And one of the guys was being especially loud. I poked my head down and asked if he could please keep it down from now, as I wanted to sleep – he looked at me VERY blankly, said ‘sorry’ and carried on chatting at the same volume. Hmmph.

Anyway, this little rant is just to demonstrate that you can get annoying neighbours anywhere, and that the pods aren’t soundproof. The main drawback to the hostel on Arab Street is, I think, that there is no common area – meaning that the guys were drinking in the pod room to save on the cost of Singapore’s pricey bevs. Understandable, but after 11pm it was a bit much! There are signs saying ‘quiet and main lights out after 10pm’ but this isn’t enforced.

But I think I may have just got unluckly with these dorm mates – I think ‘party people’ are more likely to either stay in a party hostel or their own accommodation.

TLDR: remember that these pods aren’t completely soundproof. You might be unlucky and get rowdy dorm mates. Or it might be completely fine.

Kampong Glam is a great place to stay in Singapore. It has its own distinct character, with lots of fun bars and restaurants, but also cultural places to visit like the Sultan Mosque and the Malay Heritage Centre. It’s walking distance to Little India and Gardens By The Bay, so it’s strategic to see other spots of Singapore as well. It is connected by lots of bus routes (and buses in Singapore are an absolute dream) as well as the MRT, although it is a bit of a walk away. 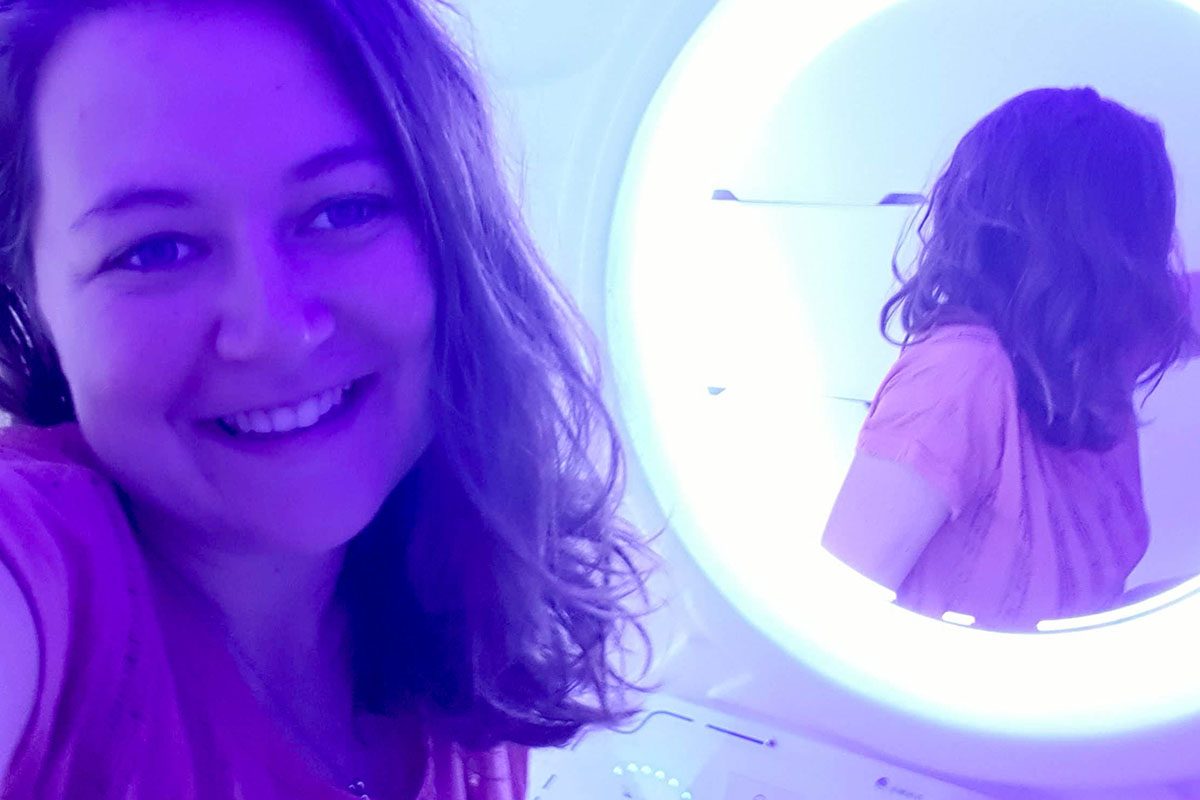 After a couple of nights in Space Pod Capsule Hotel Kampong Glam, I moved to Chinatown (I was trying to extend my stay, but they had no vacancy at Kampong Glam – so I thought I’d carry on #podlife and check out their other branch). The Chinatown Capsule Hotel is similar, but does have some notable differences.

The first being that its layout is completely different. While Kampong Glam Capsule Hotel has a few flights of stairs, Chinatown has a lift going up to one floor, and all rooms go off that. It’s also a lot smaller, and has the reception as a communal area, where a free breakfast is also served (there is no breakfast in Kampong Glam).

Inside, the pod rooms are fairly similar, but I did notice some differences. The first being that the bathrooms are not attached, but are the other side of the common area. The showers were fine, but not as great as the ones in Kampong Glam! The pod room also doesn’t have quite the same lighting as the KG branch. 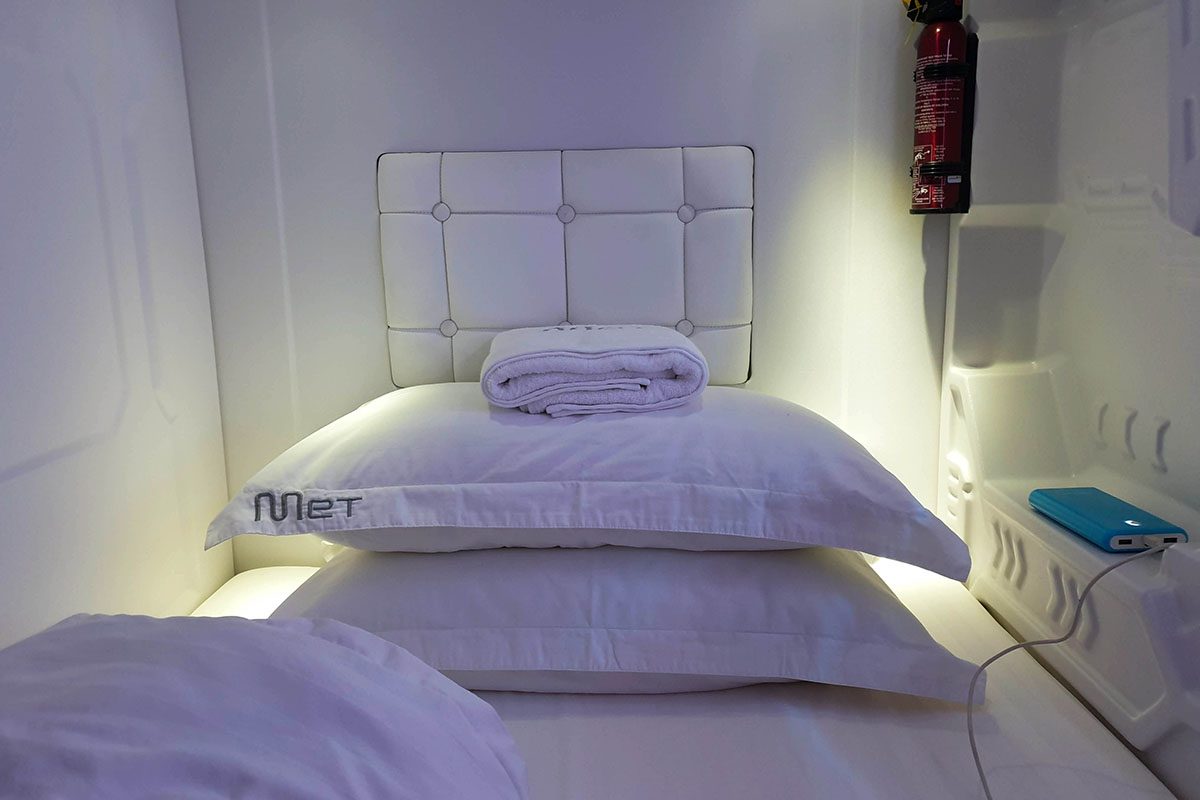 Inside the pod, most is the same, but there is no TV, and the lighting’s not quite as fun. There is lighting of different strengths, but you can’t change the colour. Not that this is a necessity, but it was good fun in the KG branch!

There was, however, a plug socket – so I could charge my laptop.

Sleeping in a pod capsule hotel in Chinatown

I was only in Met A Space Pod Chinatown for one night, and I slept fine. I think generally, Chinatown is a quieter area than Kampong Glam, so you’re even less likely to get rowdy party animals here. The lack of TVs also meant less buzz!

There is also a sign saying that quiet hours are 10am to 10pm – which seems a little extreme, but I’m always down for quiet hour!

Which Pod Capsule Hotel is Best?

It’s tricky to say – Kampong Glam probably gets my vote, but Chinatown definitely has some benefits as well.

I’d recommend staying at Kampong Glam if you:

Click here for more information about Kampong Glam and to book today.

Or Chinatown if you:

Click here for more information about Chinatown and to book today.

Other Pod Capsule Hotels in Singapore

If you’re looking at staying in a Pod Capsule Hotel in a different part of Singapore, you’ve got plenty of options. It’s quite a ‘Singaporean’ thing, and there are plenty to choose from!

Note: I have only stayed in the two above, but I believe any Met A Space pods will be similar.

Some hostels claim to be ‘pod hostels’ but they actually don’t have the futuristic pods that the Met A Space Pods enjoy, just private bunks. The following are proper capsule hotels (you can click through to see their listings on Booking):