Backpacking South East Asia is something that most keen travellers will do at least once in their life. There are so many amazing aspects to this part of the world – the beautiful beaches, the cheap alcohol, the delicious food, the beautiful temples, the amazing nature.

And the people. The incredible, warm, hospitable people, many who still remain smiling even when their home cities are ridiculously over-touristed and have changed beyond belief.

There’s a lot I could write about sustainable and responsible tourism in South East Asia and the importance of it. This post is kind of about that. But it’s also about another side of travelling.

People travel for different reasons. I travel to learn about the world, to educate myself in history and culture, and to write about it in different ways.

I think travel in this way really broadens your mind. There’s so much that we can learn from other cultures around the world. I also believe that when we are a guest in someone else’s country, it’s our responsibility to educate ourselves to a certain extent about their history and culture.

And there are some places where I think it’s a tourist’s duty to learn about some of the darker things that have happened in history. Cambodia is one of them. 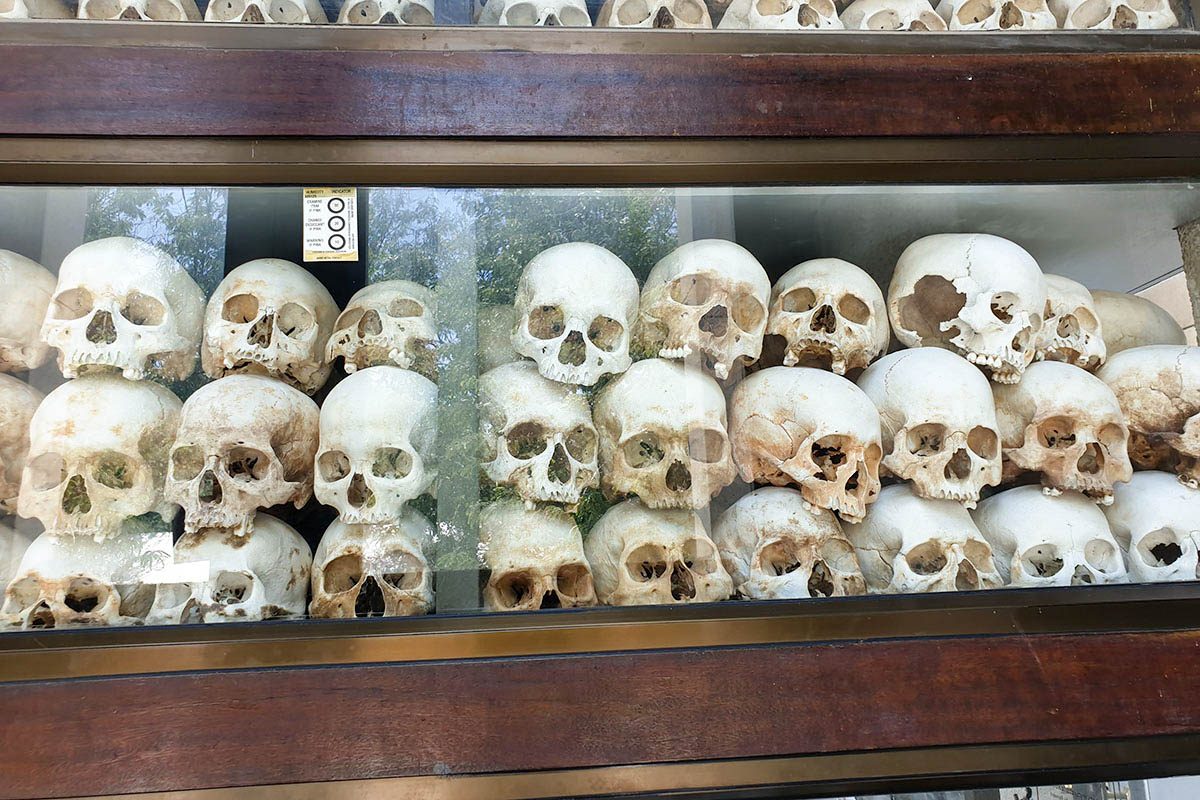 The Cambodian genocide happened between 1975 and 1979 under the Khmer Rouge, which was headed by a man called Pol Pot. It was the world’s biggest genocide of their own people, and a quarter of the country’s population died.

The only people who were spared were farmers or poor city dwellers. But even they weren’t guaranteed to live – starvation and disease were rife, and anyone who put a toe out of line risked their life.

The Khmer Rouge wanted to create a self-sufficient society, so insisted that everyone work on the land, generally farming rice. There wasn’t enough food to go around despite everyone working constantly, so many people starved.

The Khmer Rouge idealised a Communist society, and everyone had to live in a community where food and items were shared. They all had to wear the same black uniform, and they all lived in small houses that they had built themselves.

Of course, the party leaders enjoyed a much more luxurious life.

Cambodia was liberated in 1979, but took a long time to find its feet. Poverty and starvation were rife for years, thousands of people sought refuge in other countries, and people had to resume their lives from nothing, often with several family members missing.

To this day, the whole country is still suffering. It is very common for older people to have PTSD, and for their children to suffer with second-generation PTSD. The nation’s infrastructure still hasn’t caught up to international standards. People are still very poor and struggle to get by each month. The country is growing economically, and there is a definite improvement – but the scars are definitely still there.

Why Learn About the Genocide?

I know that a lot of people don’t want to learn about something so tragic. A lot of people think that, as it’s the past, isn’t it better to focus on positive things?

The way I see it, it’s not that clear cut. I think it’s great to focus on positive things, to think just about the future, when we’re living in our own bubble and dealing with ourselves.

But when we travel, we’re catapulting into a world that has had trauma, and we need to know how to handle that respectfully. We’re entering places that have completely different culture to our own, where things that we do might seem disrespectful, where there are obvious explanations to why certain things are done if we learn about its history.

The truth is, Cambodia is still suffering. And while travelling has so many amazing benefits to people who travel, I do think that there needs to be some benefits to the countries themselves.

We can only really learn how to be a sustainable and responsible tourist in Cambodia if we take the time to learn about its history.

It’s also a respect thing. Cambodia have opened these sites up as a symbol of respect for the people who suffered and died under the Khmer regime, because they don’t want their suffering to be forgotten. They want tributes to be paid for those who did tragically lose their lives under the rule of Pol Pot.

Learning about the tragedies that have happened in the past is also a constant reminder to do what we can collectively to work for a brighter future for people all across the globe. Cambodia is at peace now, but there are people in other countries who are still victim to genocide; and learning about the horrors of one genocide raises awareness about others around the world. 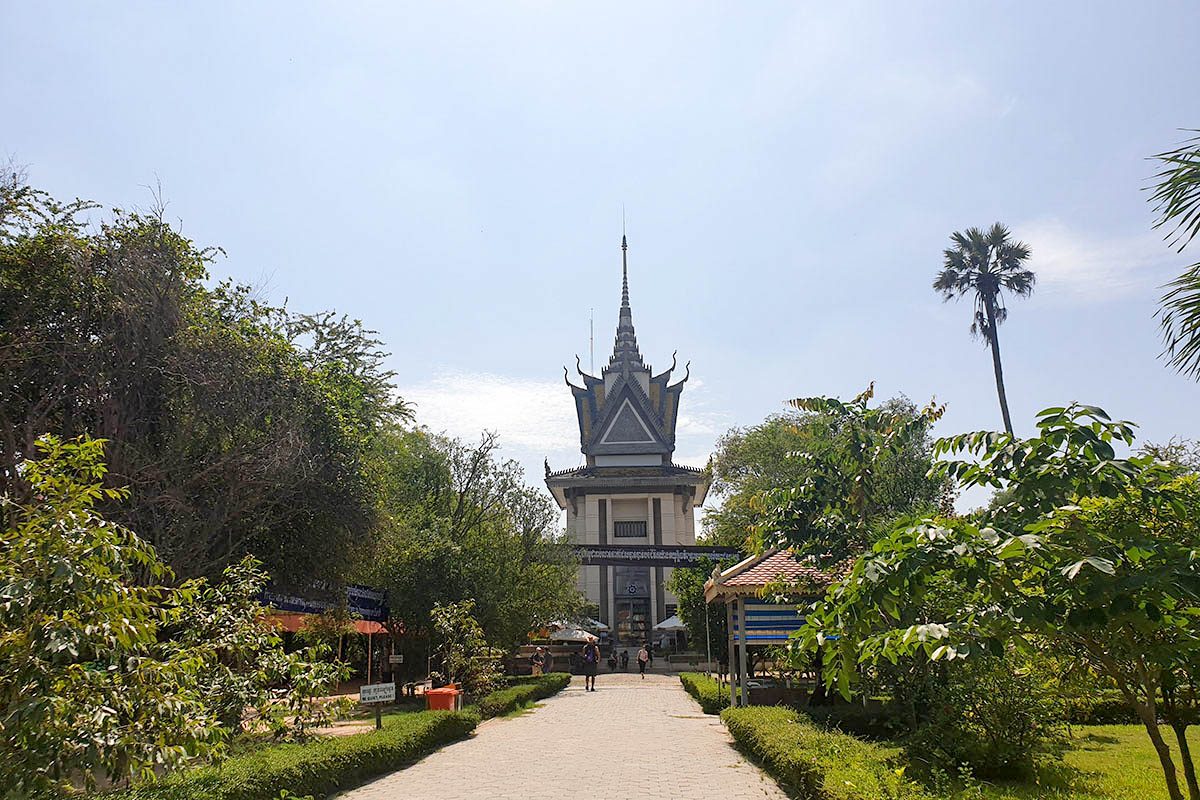 The Killing Fields are located a little way out of the city. As you can imagine by the name, they are where people were killed and buried. There are many killing fields throughout the country: but these are the only ones that are open to tourists. Entry includes an audio guide, which details the full story of the genocide, as well as some survivor accounts. It’s shocking and very disturbing – it’s hard to find words to describe how I felt when walking around – but it’s important to see.

The S21 Prison, or the Tuol Sleng Prison 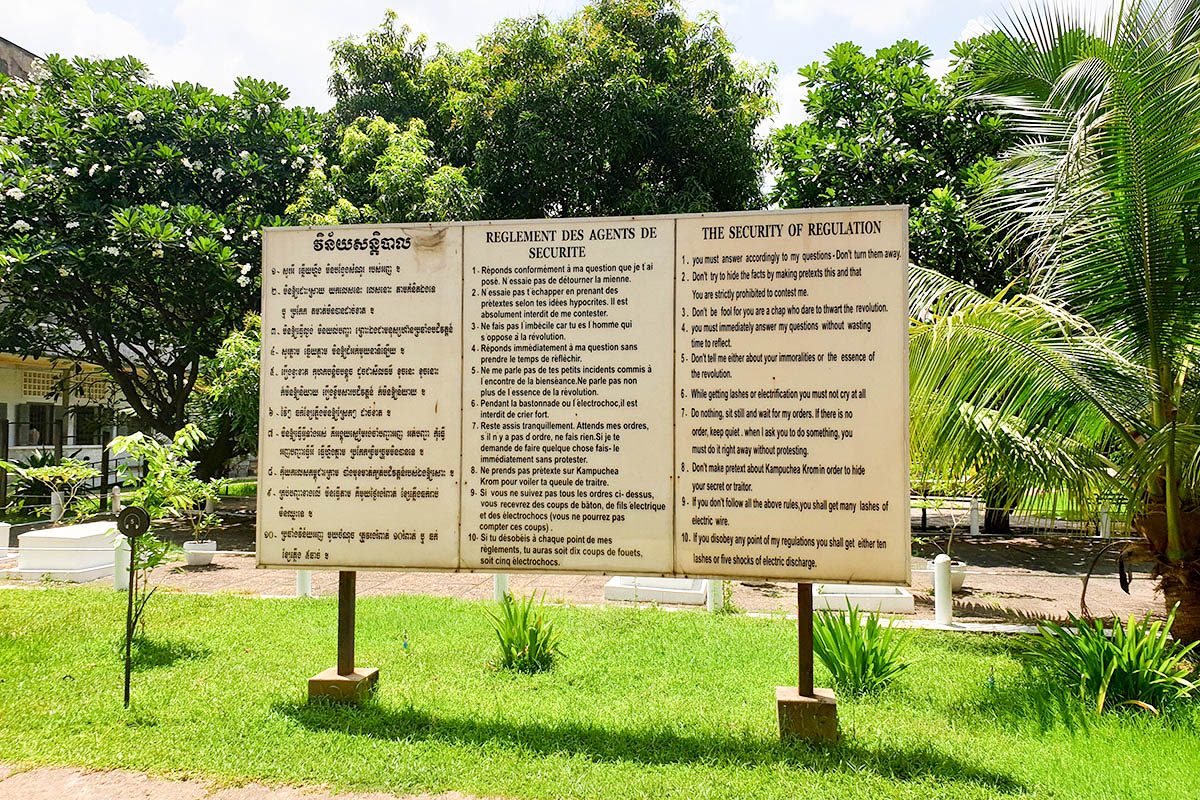 The S21 Prison is the most notorious interment building of the period – 12,000 people here were tortured and murdered, with only around five people surviving. An audio guide takes you around the prison, again with some horrific accounts and the stories behind the people who survived.

When I walked out of the prison, one of the men who’d survived it was there. He’s called Chum Mey, and he’d written a book about his time there, and bravely meets tourists there every day. You can purchase a book from him, which goes into more detail about his haunting experience and unlikely story of survival.

How to Get to the Memorials

You can also take a hop on hop off guided tour – tickets are bookable here – or take a private tour with various companies. Click here for tickets.

It’s a shame I even have to write this section, but I did unfortunately see quite a few tourists behaving really disrespectfully at the memorials. Here are some basic DOs and DON’TS.

I hope that this post has helped you when considering a trip to Phnom Penh’s memorials. As I mentioned, this isn’t an easy post to write, it’s one I’ve gone back and forth with and edited a lot, and I hope I’ve conveyed myself correctly throughout the post. I am also currently reading up on the Cambodian genocide, and will be updating this post if I learn more relevant information. Do leave a comment if you want to add to the discussion.