Karijini National Park is a firm favourite on any Western Australia road trip itinerary. Full of delightful gorges, mesmerising trails and enchanting pools, Karijini will leave you mind-blown. Through all of my travels, Karijini is my favourite national park – and I have no doubt that you’ll love it too.

What makes Karijini so special? Whether you want to stroll down beautiful waterside paths to reach stunning mystical pools, get a dose of adrenaline by descending into Handrail Pool or even try your luck at abseiling down one of the gorges, or just sit with a picnic and watch the world go by at one of the prettiest waterfalls in Western Australia, you’ll find something to satisfy yourself at Karijini. Karijini National Park has it all.

Although Western Australia is a notoriously expensive destination, visiting Karijini on a budget is entirely possible. At only $12 for entrance and camping from $10 per night, Karijini is a fantastic destination for travellers of all budgets. 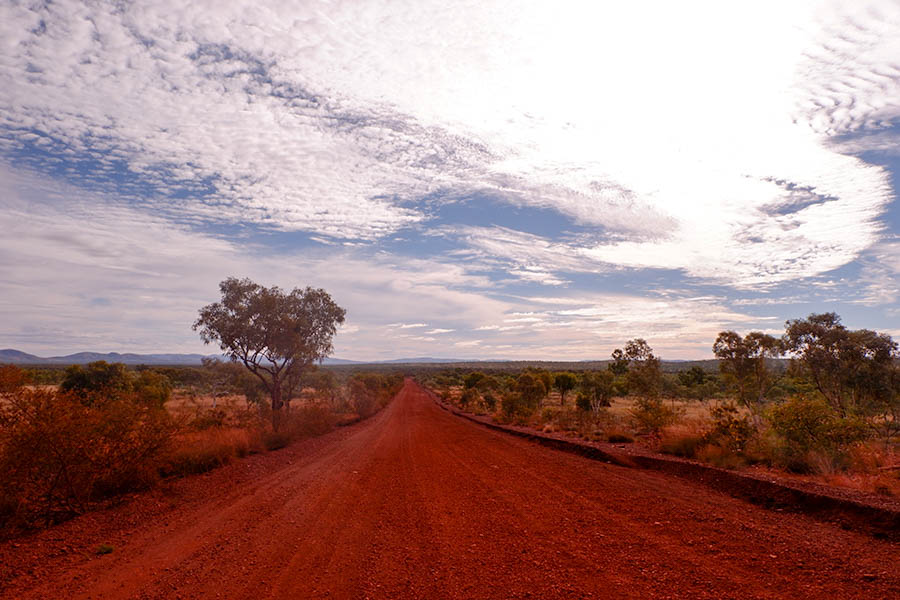 Most tourist destinations in Western Australia take ‘isolated’ to a new level – and Karijini is no exception. It’s located seven hours from Exmouth and five from Port Hedland, with its nearest town, Tom Price, 40 kilometers away.

Tom Price is a mining town that, considering its remoteness, is actually quite large. There’s a smattering of cafes and restaurants, a few attractions within the town itself and a COLES (!!!) (one of Australia’s leading supermarket chains). For all those who haven’t embarked on a Western Australia road trip just yet, you’ll soon learn how exciting it is to reach a town with a shop where you don’t have to take out a loan just to buy a loaf of bread. THIS IS LIVING.

There’s no shops in Karijini, so stock up on food in Tom Price.

How to get to Karijini

It’s a long old way to Karijini National Park from anywhere. Excuse my face and bad singing voice at the end, but don’t excuse my road trip music taste – Shakira is queen.

Driving to Karijini is pretty much the only way to access the national park; also, it’s an essential part of a Western Australia road trip and you wouldn’t want to miss the state’s other attractions, such as the Ningaloo Reef, Shark Bay and Kalbarri National Park.

Flights are also an option, although they are quite expensive. You can fly into Paraburdoo and rent a car to explore the park, but watch out because some of Karijini’s roads are gravel and corrugated and some car rental companies do not allow their cars to brave these roads.

Hitchhiking is of course, always an option!

The Best Walks in Karijini 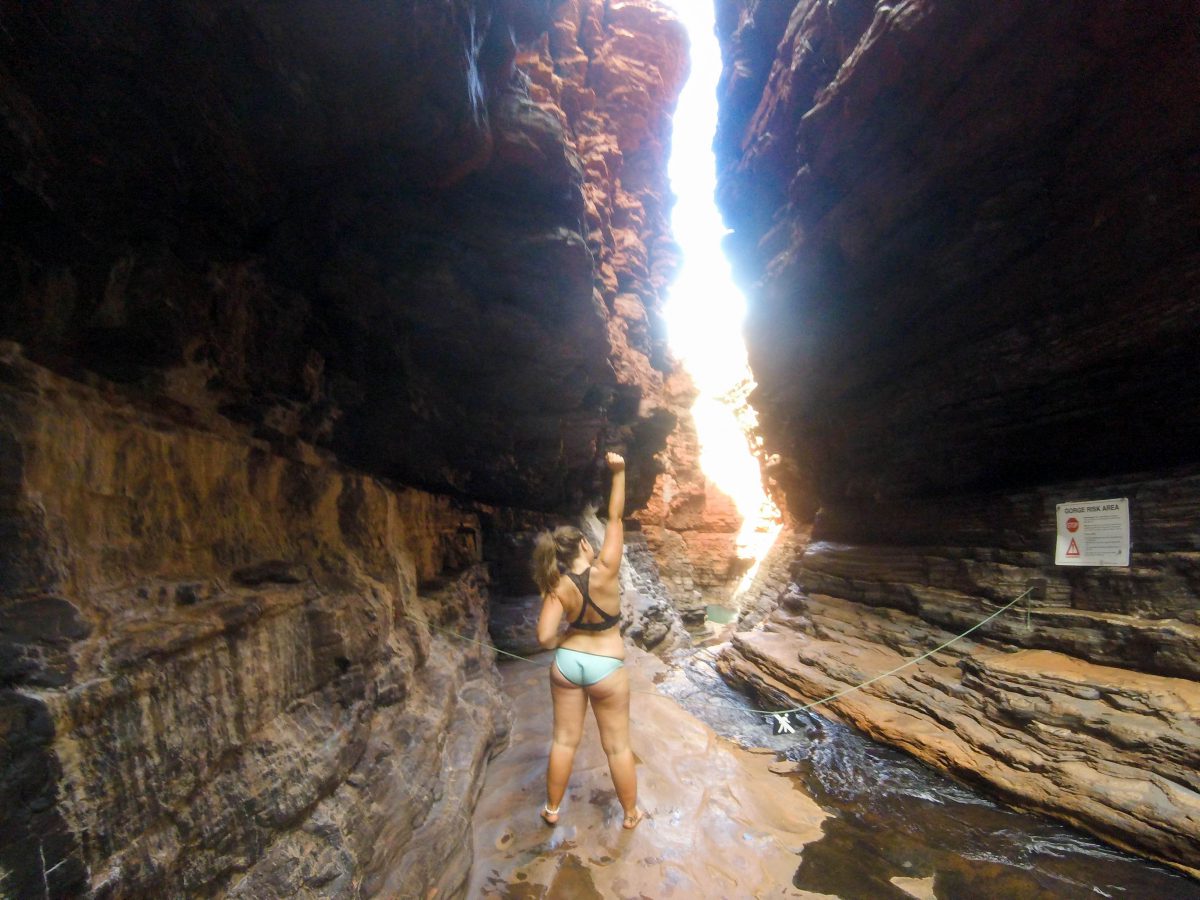 Hancock Gorge – ‘a journey to the centre of the earth’ – takes hikers into a delightful prehistoric looking gorge – I honestly felt like a stegosaurus could be coming around the corner any second.

The adventurous can then proceed over rocks/ through water (waterproof camera is essential) before doing a spiderman walk traversing two cliff faces and descending into the cold but spectacular Kermit’s Pool.

The Hancock Gorge walk trail is 135 meters and takes 10 minutes return, and the plunge into Kermit’s Pool is not much longer distance-wise – but will take you some time as you need to swim and climb.

Probably the most nerve-wracking of all of the walks is Handrail Pool. Hikers must scramble over boulders and through cramped gaps to reach a pool – which you descend into just by a handrail and praying your feet are in the right places. If they aren’t, you could plummet to doom. (Maybe that’s a bit dramatic, but it would definitely hurt!)

Handrail Pool is once again, cold. But it’s beautiful, and the novelty that comes with plunging into a pool within gorges means there’s most definitely worse places to be.

Starting with the gorgeous (couldn’t resist) Fortescue Falls, you might want to jump straight in for a dip. But it’s definitely better to wait until you’ve hiked Dales Gorge, when you’ll really want cooling down!

The Dales Gorge hike takes you to some of the most stunning pools in Karijini National Park, including Fern Pool and Four-Colour Pool. It’s a 4 kilometer walk along the bottom of the gorge – and once you’re done, yes, you’ll be needing that swim.

This is a pretty easy walk along the gorge floor – but this doesn’t mean that it’s not spectacular.

Walking and picnicking along the gorge base gives a sort of fairytale feeling, with permanent pools and the spectacular red cliff edges that Karijini is famous for. The gorge walk is three kilometres.

Before the actual Karijini gates, but within the Karijini National Park area is the beautiful Punurrunha or Mount Bruce, the second highest mountain in Western Australia. It’s a challenging hike up to its 1,234 meter high summit (that’s the easiest mountain height to memorise, remember it, you never know what might come up in your local pub quiz). There’s a lot of nearly vertical climbs and sheer drops – only do this hike if you’re used to climbing mountains and have a spare pair of underwear in your daypack.

You might know this peak as Mount Nameless, but that’s not its name. The mountain has been known as Jarndunmunha for thousands of years, and when British settlers invaded this part of WA, they didn’t think to ask its original settlers what the name was, instead deciding it was nameless. For me this is a metaphor of the disrespect (at best) that the Aboriginal people have suffered all over Australia for the last 200 odd years. Be respectful to Aboriginal people when in Australia, it’s their country.

Anyway, Jarndunmunha has a 4WD track that I would have loved to try. Unfortunately, my Subaru, while capable of a lot, has to be careful of some things. It’s recommended to put a 4WD car in low range and let the tyres down. My sources say it’s only a 20 minute drive to the top.

This is a fantastic lookout onto Joffre Gorge, a waterfall creating a natural amphitheatre.

This shows the meeting point of Knox Gorge and Wittnoom Gorge; geography enthusiasts in particular will love this demonstration of a stunning landscape.

One of the most impressive lookouts in the park, Oxer Lookout gazes over the junction of Weano, Red, Hancock and Joffre gorges, with a stunning pool at the bottom of the gorges.

Your other option is the slightly fancier Karijini Eco Retreat which is near to Hancock Gorge and Weano Gorge – but this costs $20 per night and doesn’t have too many more facilities.

If you’ve read a few of my posts, you might have noticed that I like to camp – to the extent that I spent five months living in a tent when I first came to Australia! And every frequent camper loves nothing more than a free campsite. There’s plenty of these in Australia, but staying at a free campsite near Karijini isn’t really worth it – you’ll spend the same amount you’ve saved in fuel coming in and out of the park – it’s a long way!

There’s limited potable water on site – it’s best to bring your own. Or alternatively, you could fill your tanks with non-drinking water and boil it before use.

All gorges and campsites operate on a ‘take your own rubbish’ policy – there are bins for your use near the visitors’ office.

Karijini Eco Retreat has a bar, restaurant and shower facilities, but all of these will cost. You’re backpacking in Karijini national park on a budget, so scrimp on the shower and a meal out to afford more fun things on the rest of the west coast!

The Best Time to Visit Karijini

We visited mid-June, the start of winter in Karijini. This was quite a good time to visit – temperatures were around mid-twenties during the day – although we were very lucky with the night temperatures as they did not go lower than 13. If you don’t want to risk freezing temperatures at night, April or May, (just after the wet season), or September to October (just before) would be good times to visit. Although Karijini doesn’t have a crazy wet season like the Kimberley region to the north, it’s probably best to avoid this time of year – temperatures can top 40 degrees and it can be very dangerous to be in gorges when it rains due to flash floods.

So that’s the inside scoop on visiting Karijini National Park on a budget! Have you been? Do you have any plans to go?  What’s your favourite national park?

I’d love to keep improving this article so it helps readers for many years to come. If you have a burning Karijini question that I haven’t answered, drop me a comment and I’ll do my best to answer it!

8 thoughts on “Visiting Karijini National Park on a budget”