I’m writing this on the Trans-Mongolian train after just over one week in Mongolia. This was pretty much all spent in Ulaanbaatar (with a two day trip in a nearby national park), the capital. “What do you do with one week in Ulaanbaatar?!” I hear you ask.

One week in Ulaanbaatar (also known as Ulan Bator) is a long time to spend in the city, but I had to organize a Russian transit visa (btw: perfectly fine and pretty easy to obtain in Ulaanbaatar), which took up some time.

If you’re travelling in Mongolia, you don’t need to dedicate that long to the capital – but there are some things worth seeing here. 2-3 days is enough for the city centre, and there are a few great day trips from Ulaanbaatar as well.

How to get to Ulaanbaatar 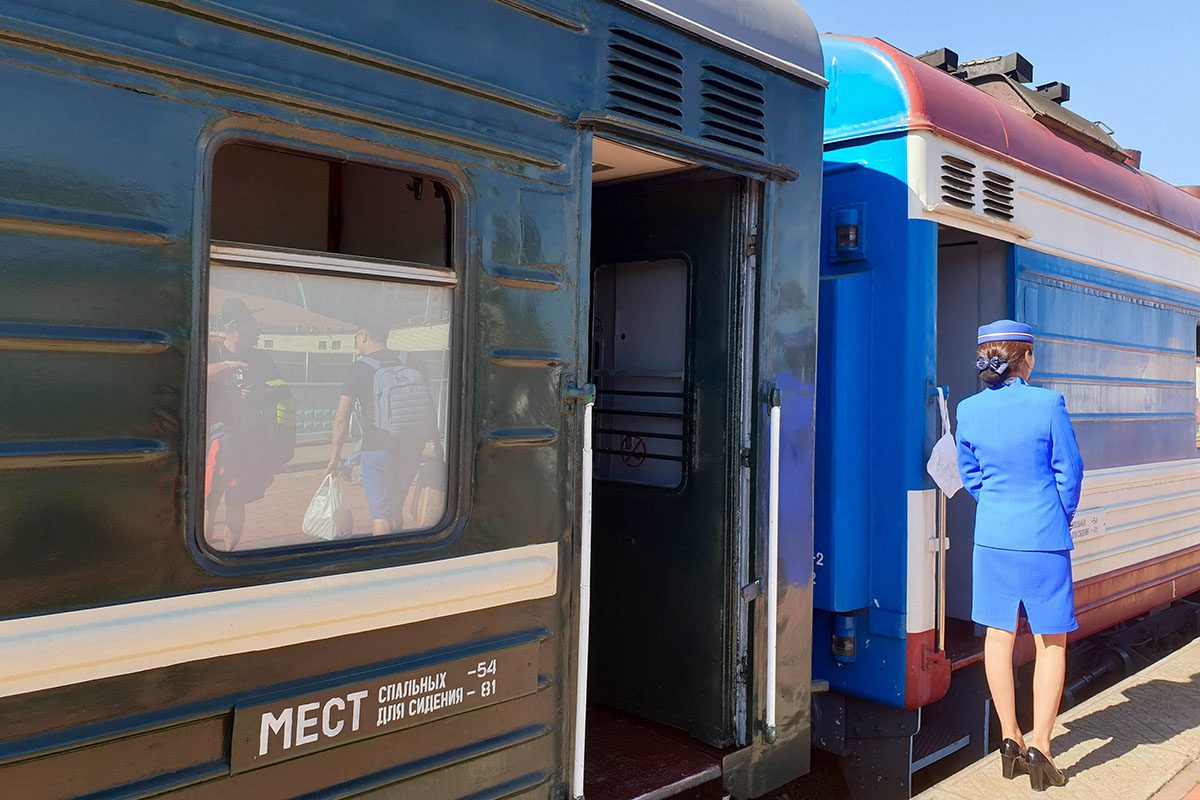 If you go to Mongolia, you’ll pass through Ulaanbaatar. It’s not the cheapest place to reach; let’s discuss some options. 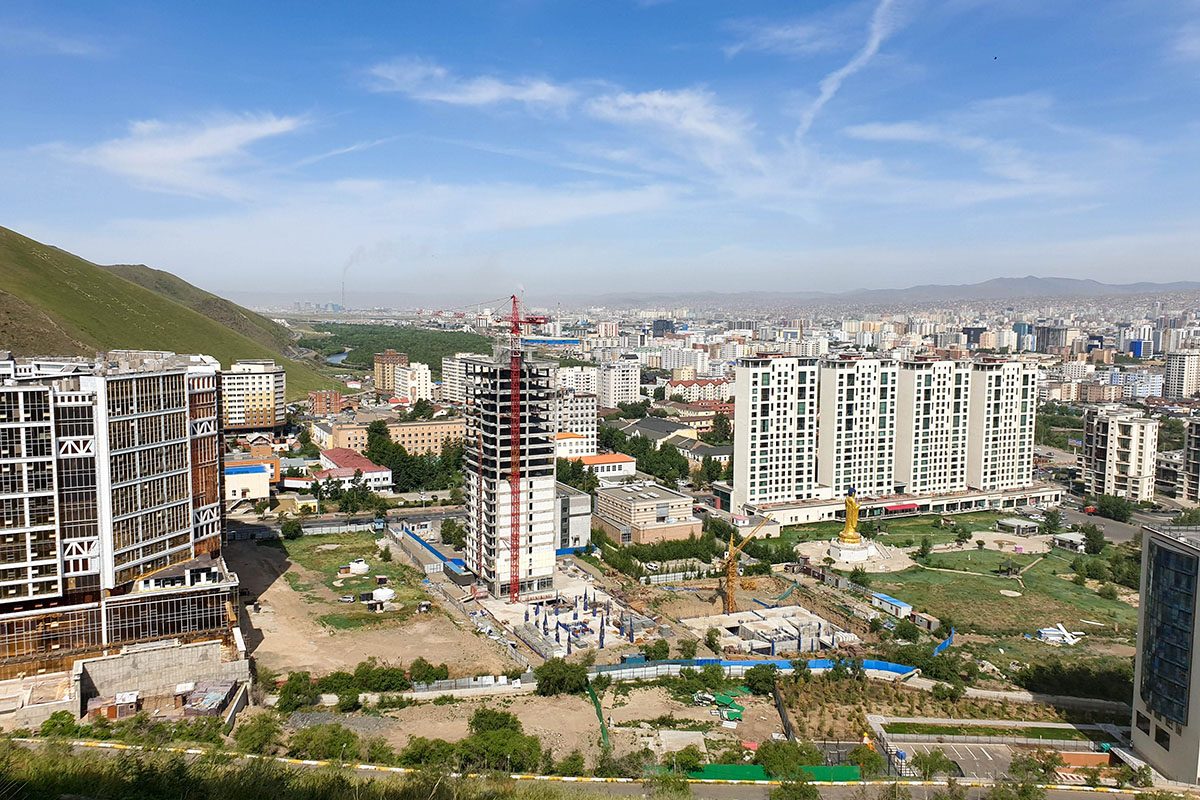 Day Three: Transfer back to Ulaanbaatar in the morning, visit Gadengein Monastery in the afternoon, traditional show/ opera in the evening

Day Four: Trip to Hustai National Park to see the horses and other wildlife. This is a 4WD tour, with your guide driving the vehicle.

Now we’ll dive a bit deeper into some of these amazing things to do in Ulan Bator.

Best things to do in Ulaanbaatar

When I get to a new city, I always check out the national museum first. Mongolia’s was pretty impressive – spread out over four floors, it gives a really great insight to the country’s past.

You’ll learn all about ancient Mongolia, the Mongol Empire, its Soviet days and its independence and journey from Communism to Capitalism.

There’s lots of information, plenty of visual exhibits, and even some emotive music at the end that moved me to tears (not that it takes much to do that). 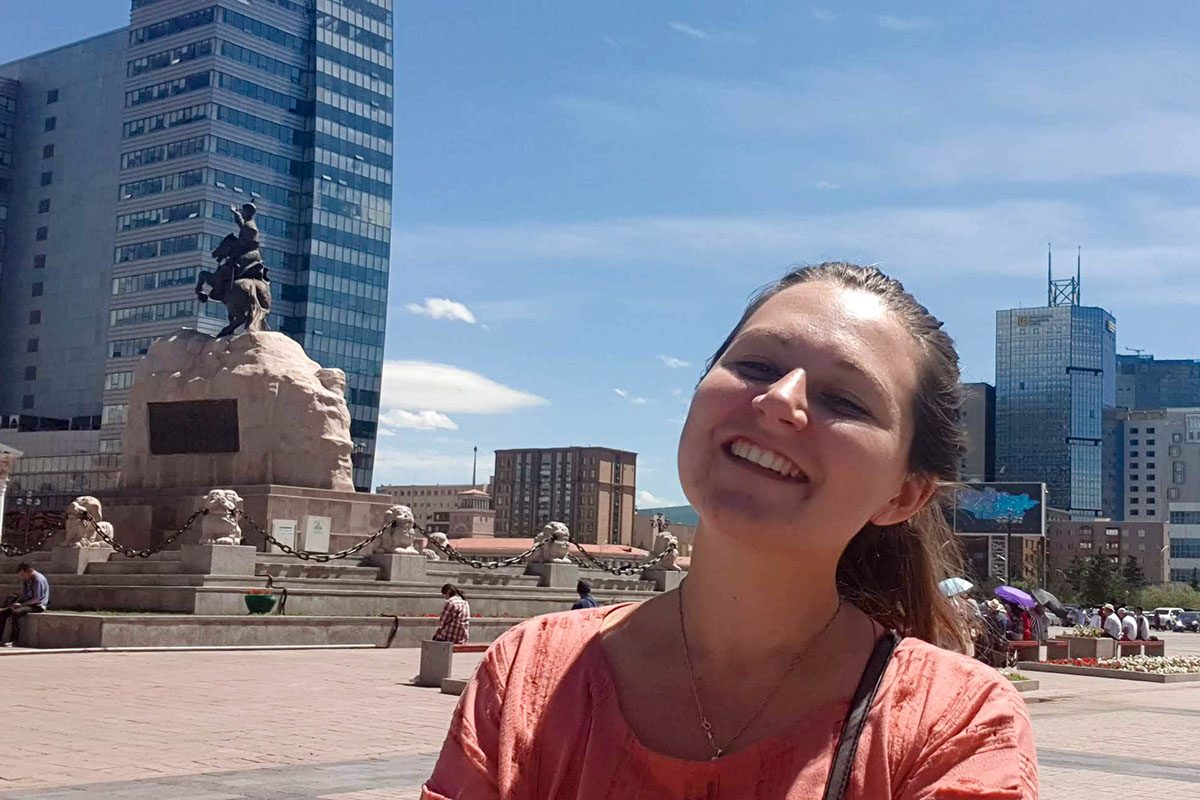 This is the centre of Ulaanbaatar and one of the most popular spots in the country. It has a statue of Ghengis Khan (it’s not the famously huge statue, we’ll get to that in a mo), as well as parliament buildings and a great view over the cityscape. 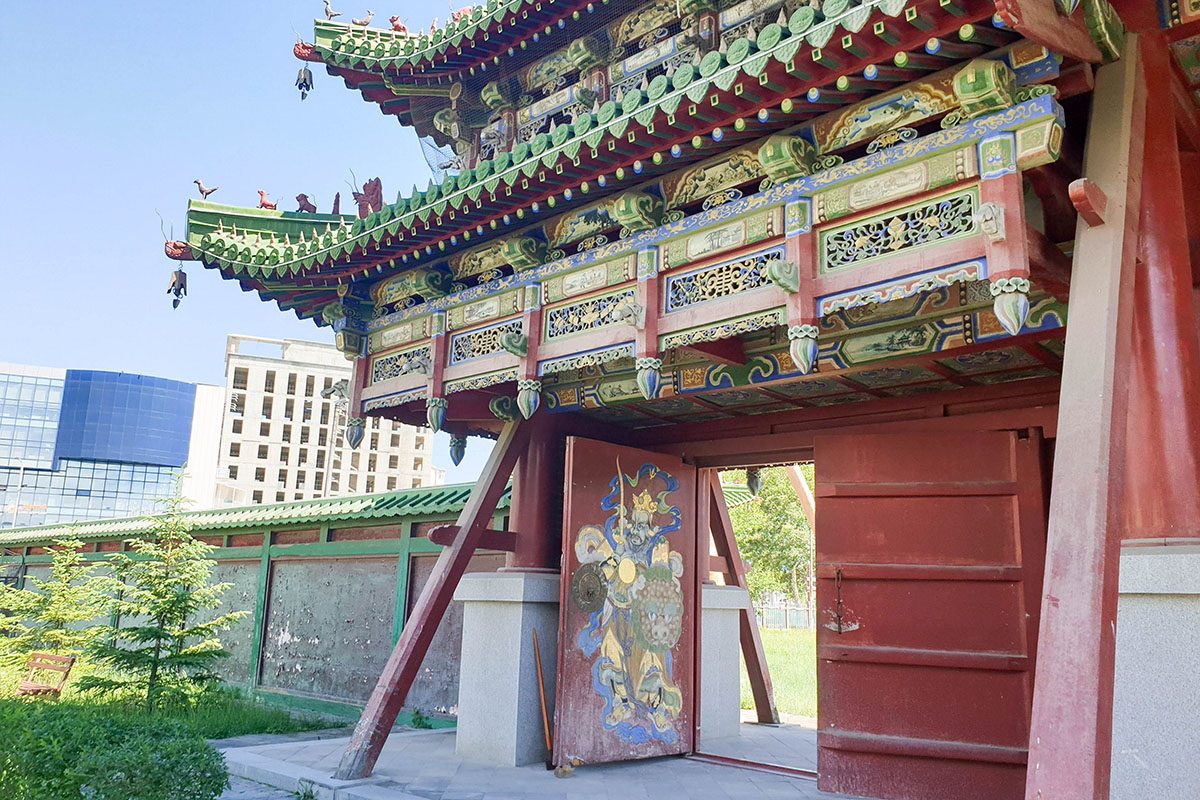 Just South of Sukhanbaataar Square, this monastery has some beautiful regal buildings and a room at the back that’s crowded with… stuff. Heads of Buddha statues, little figurines of temples, and drawings are all crammed into a small room that looks like an eclectic’s attic. It’s definitely worth visiting, I was really quite taken by it.

Mongolia’s only King and Queen used to hang out here, in a winter palace which was inspired by European architecture (although with some additional Buddhist features after people complained that it didn’t look East Asian enough), and a Summer Temple. You can enter and browse the exhibits – it’s cool to check out, although is a little way from the centre. 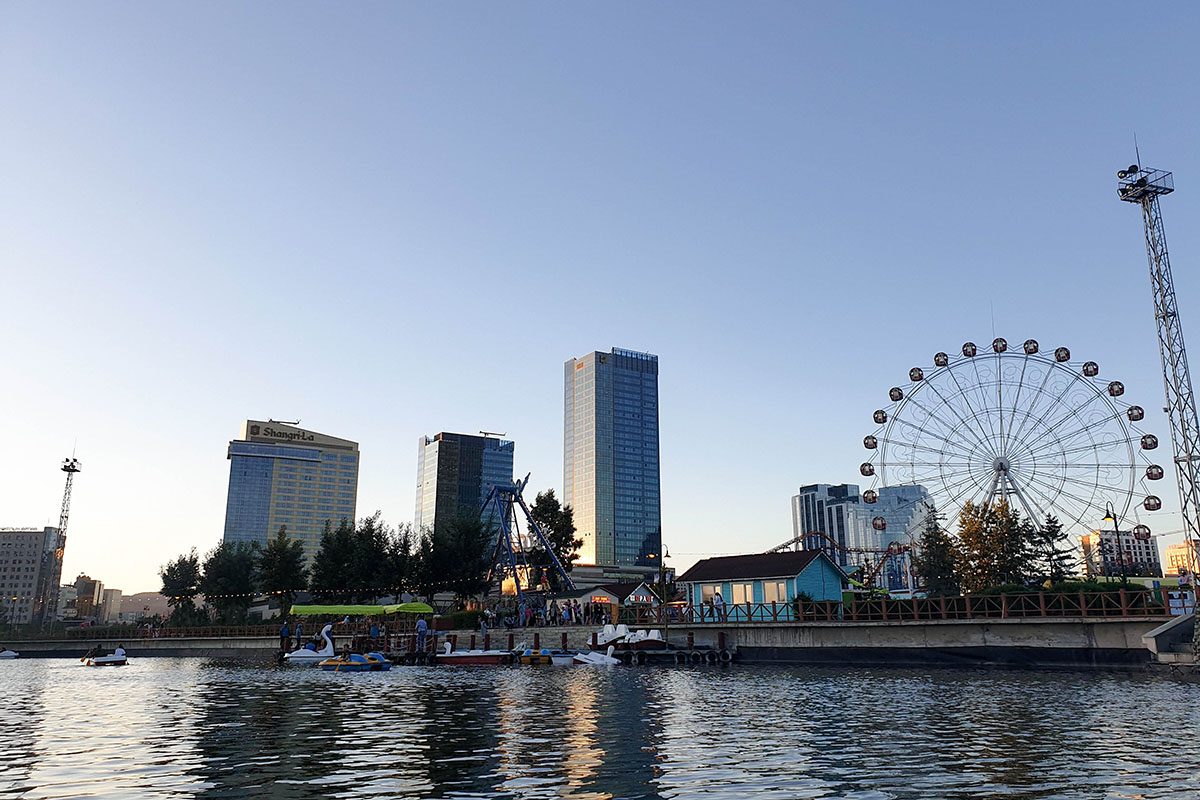 The National Park, as it’s known by Mongolians, is actually a funfair, full with theme park rides like a rollercoaster (which looks terrifying and I didn’t see it being used while I was there), a rocking pirate ship, spinning cups and lots of other rides and attractions. It costs around 5,000 tögrög for a ride.

Ulaanbaatar is a surprisingly modern city, with skyscrapers, flash buildings and quirky bars and restaurants. Walking around the modern CBD is one of the best things to do in Ulaanbaatar to appreciate this. Check out the restaurant made of shipping containers and the various coffee vans, as well as the street art in the centre. It’s a real contrast to the nomadic lifestyle of the rest of the country. 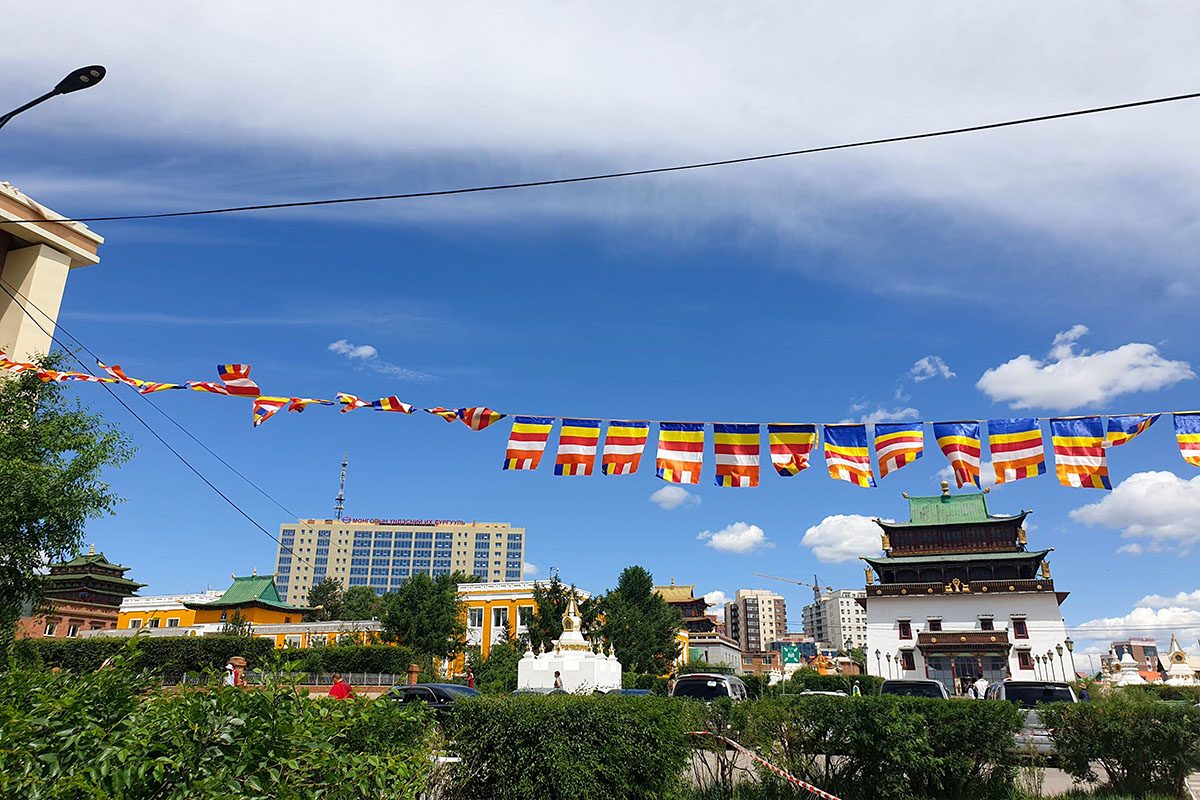 The Gadengein Monastery houses a large Buddha statue and various ornaments and pictures. It is a working monastery, and lots of people use it as a place of worship. Even if you’ve seen lots of temples in South East Asia, it’s still worth checking out as it’s different to many other spots further south, being somewhat influenced by Shamism. 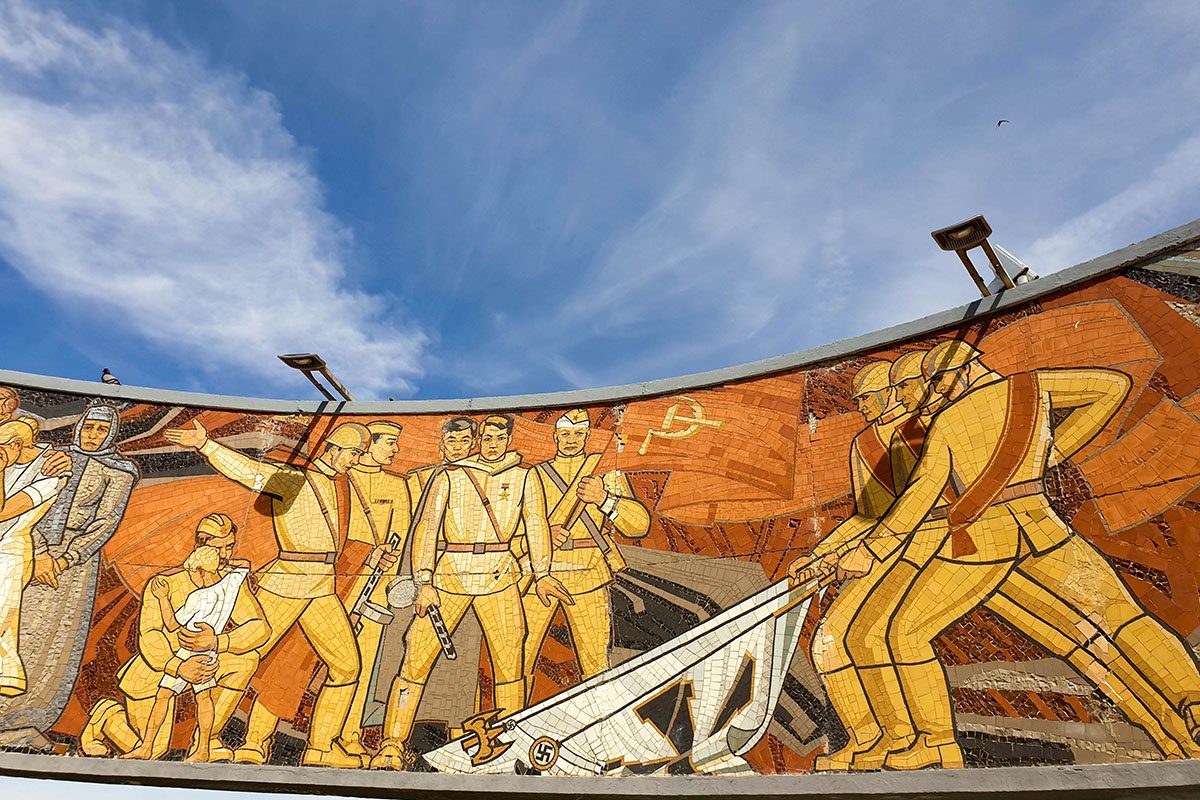 A little way out of the city centre, but reachable by taxi (and sometimes included on a day trip of Terelj National Park) is Zaisan Hill. The hill accommodates a memorial which was built in Soviet times and commemorates those lost in World War Two. There’s some Soviet artwork (pictured above) and a stunning view from the top.

As well as the national museums, there are some other great spots to visit in Ulaanbaatar. These include the Costume Museum, the Dinosaur Museum and the Military Museum. 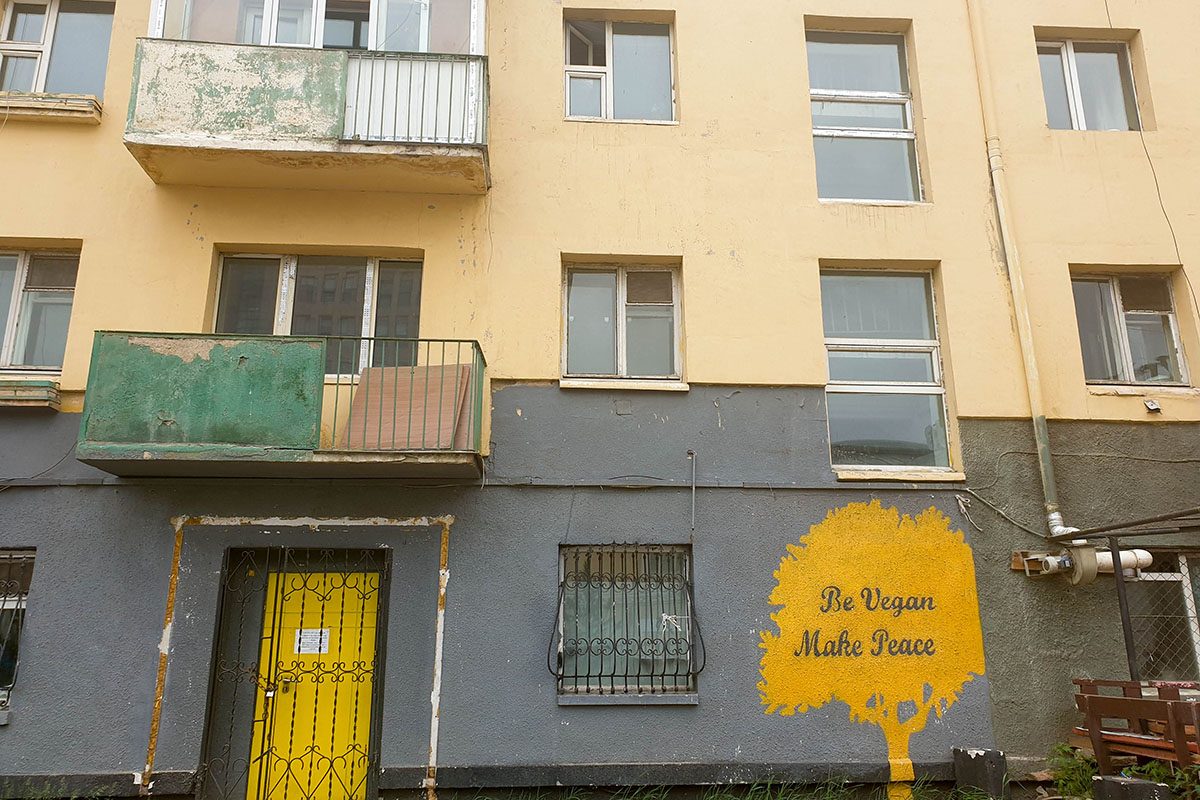 And who woulda thought, Ulaanbaatar is actually a vegan haven. There are a few vegan restaurants in Ulaanbaatar, serving up plant-based takes on Mongolian classics. Generally made with fake meat, but always delicious, I ate Mongolian dumplings, Udon noodles, soups and ‘meat’ and potato dishes, made entirely from plants! 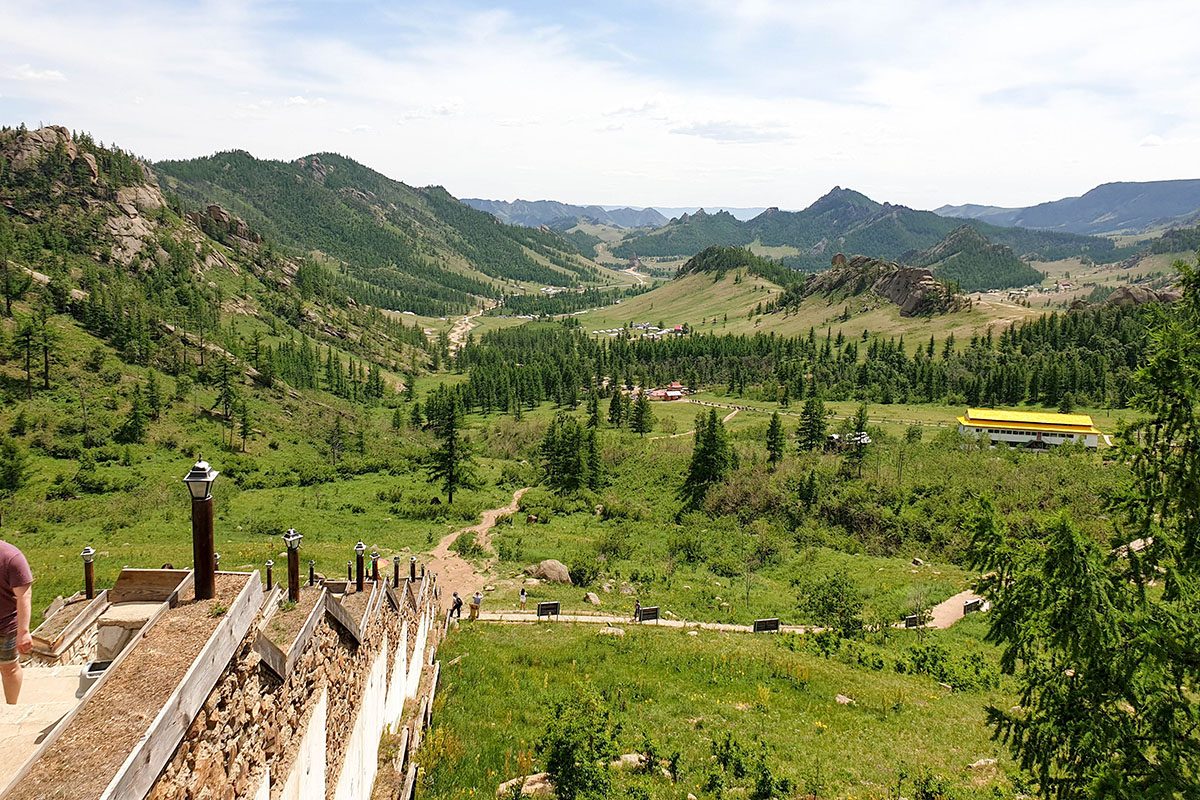 Located about two hours from the city, Terelj National Park has some of the area’s most beautiful scenery. In contrast to the stark Gobi in the south, Terelj has rolling hills and forest, which remind me more of how I’d think Siberia to look (I’m on my way there now, so I’ll let ya know!) (edit: yep, some Siberian scenes* are like what is pictured above).

You can visit spots like Turtle Rock or the Ariyaval Monastery (which has an amazing view but is a very arduous climb!) or just drive around and WOW at it all. If you’re keen to spend a night in a yurt, that’s also possible in Terelj. 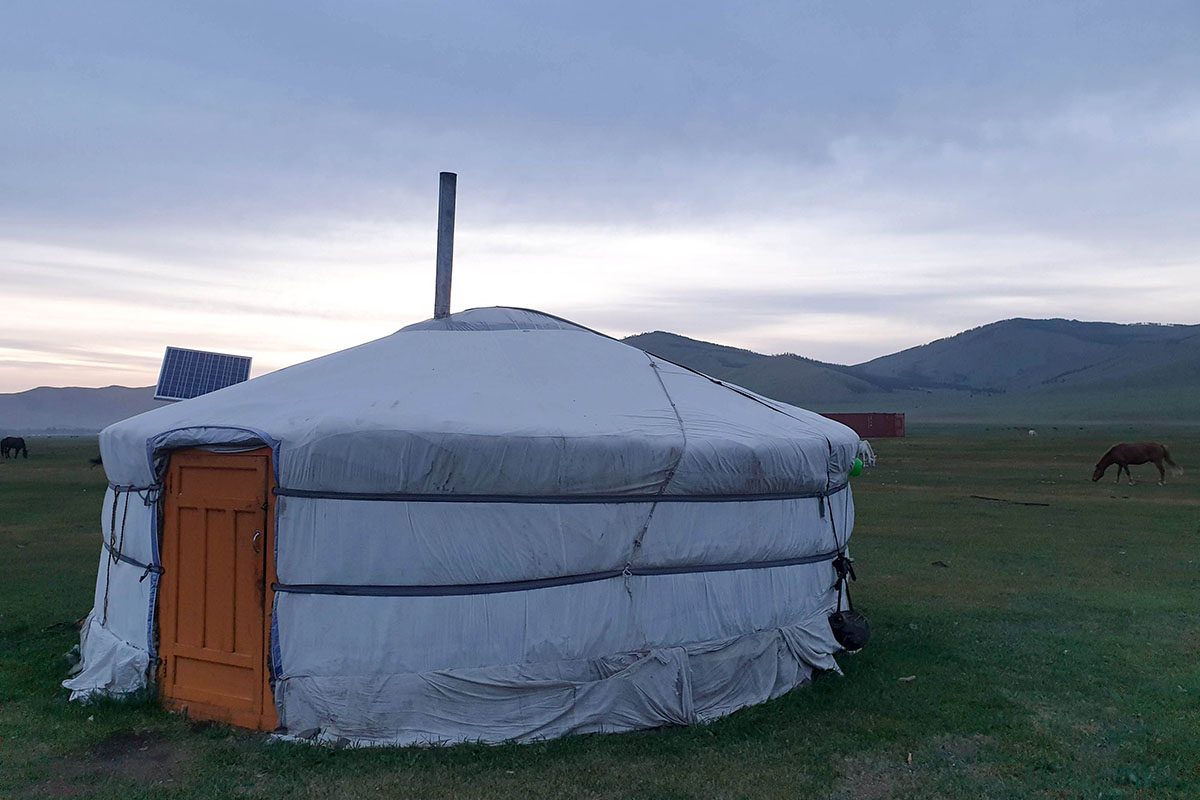 I stayed in a yurt in Terelj and made a YouTube video about it – check it out! 🙂 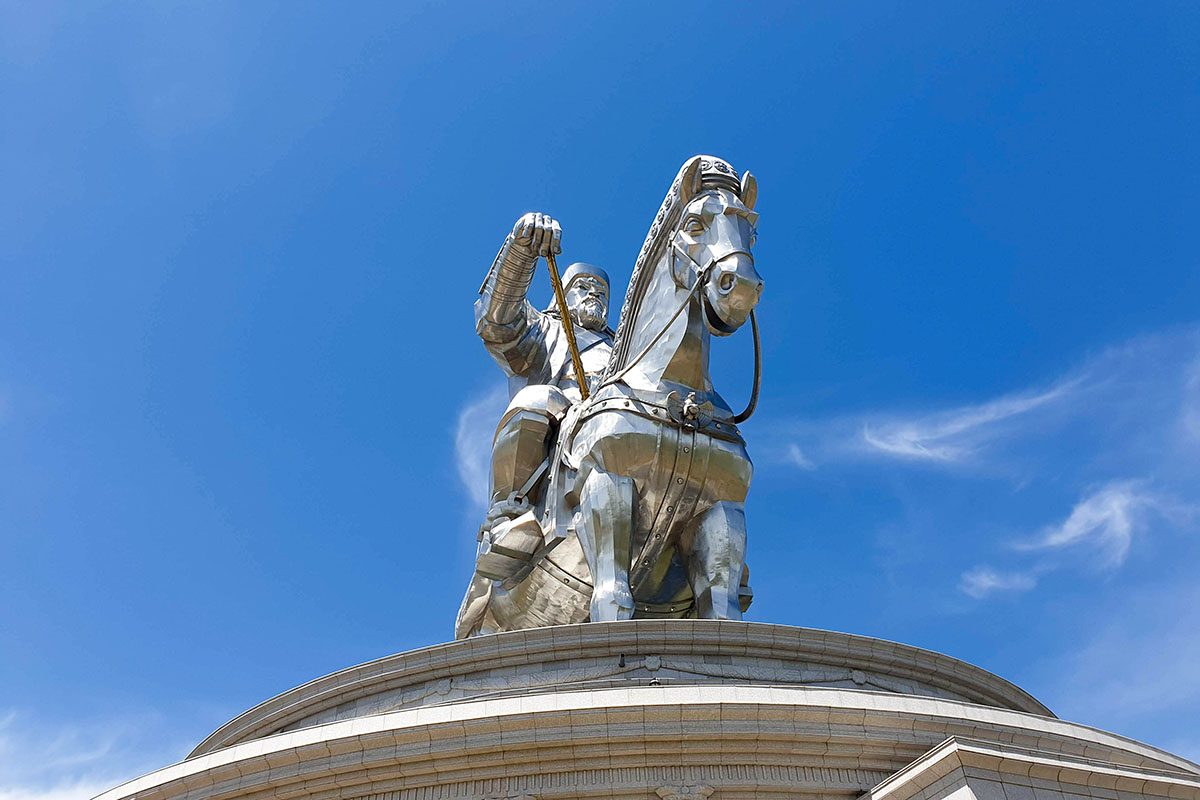 The Chinggis Khan Statue is the biggest statue of a man on horseback in the world and a national treasure. The base of the statue has a bar and restaurant, toilets and souvenir shops inside, and you can go up to the horses head – and enjoy the rather daunting sight of one of the most murderous men in history looming behind you.

This National Park is one of the most popular day trips from Ulaanbaatar, and while it’s not quite as epic as Terelj, it does have the chance to see lots of local wildlife, including Tahki horses. These are thought to be the original horse breed and originate from Mongolia.

They actually ended up in zoos all around the world and faced extinction, until people decided to bring them back to Mongolia and breed them. I’m not quite sure of the ethics of the breeding – whether it’s natural or forced – so can’t comment on that right now, but they are wild horses and left to their own devices, which is great. However, you’ve got quite a high chance of spotting them in ze wild at Hustai.

Things to do in Ulaanbaatar at night 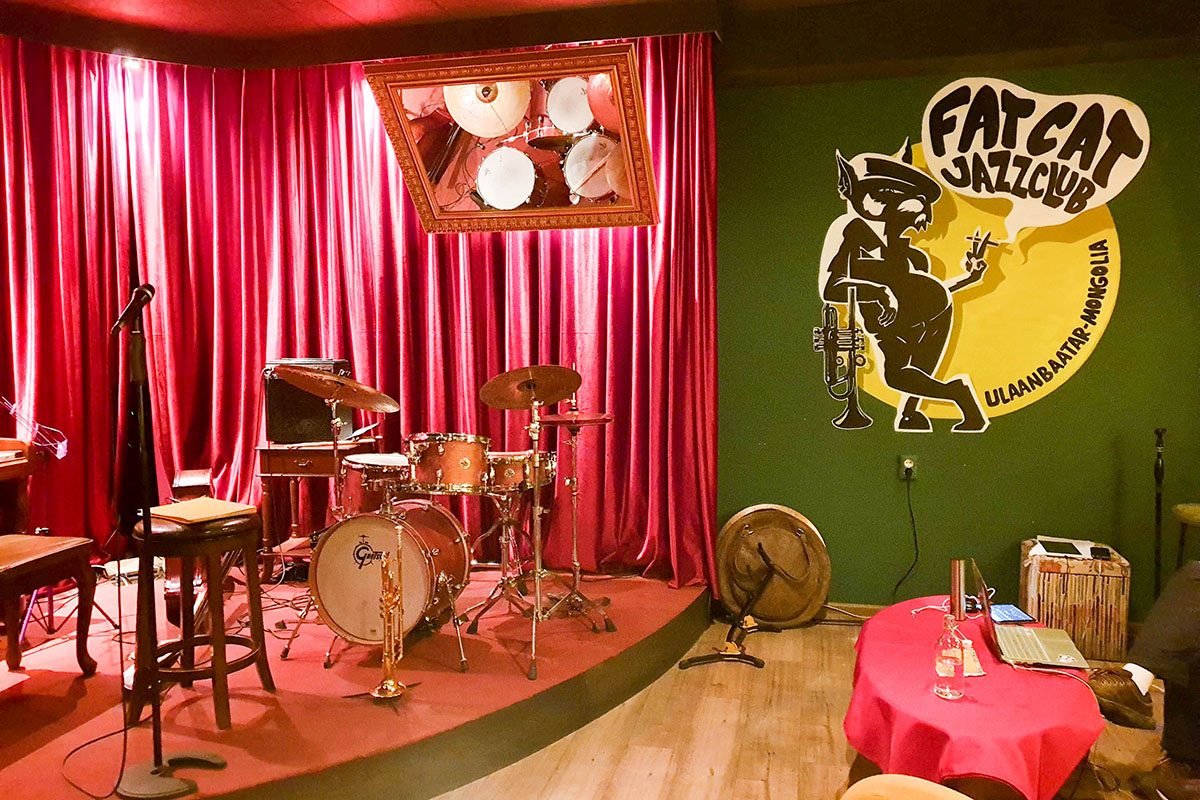 The Fat Cat Jazz Club is a new kinda establishment in the city, but it’s popular with locals, tourists and foreign residents.

It serves up beer, wine, and cocktails as well as local and Western food, and there’s live music every night.

On certain days, there’s English stand up comedy in Ulan Bator. There’s also Mongolian stand-up, if you happen to be able to speak Mongolian.

The Mongolian Opera is a show worth seeing – in saying that, I didn’t while I was there, but I’ve heard good things.

There are lots of national performances in the theatre and other locations around the city. I caught a free show at Galleria Mall near Sukhanbataar Square, but the Colours of Mongolia show (which is a lot longer and features dancers, contortionists and musicians) is also worth checking out. It costs around 35,000 to see.

Where to Stay in Ulaanbaatar

Hostel: Danista Nomads Hostel is simply wonderful. It’s where I stayed throughout my entire time in Ulaanbaatar, and I really loved it. There are dorms and private rooms; most guests stayed in privates but I was in a dorm. The dorm was wonderfully spacious, with a mezzanine level and table. It had good WiFi, free breakfast which is served in a little yurt, and the loveliest and most helpful staff I’ve ever come across. If you’re looking for a hostel or cheap guesthouse in Ulaanbaatar, stay here. Click here for more information and to book.

Mid-Range Hotel: Urgoo Hotel has well-facilitated and rooms with en-suites with rain showers, friendly staff and is in a great location. I didn’t stay here, but was contemplating it before I realised I was skint and needed to stay in a hostel. Click here for more information and to book.

Luxury Hotel: The Blue Sky Hotel and Tower – if you want to stay in somewhere iconic in Ulaanbaatar, the Blue Sky Hotel and Tower is perfect. It’s in the city’s most notable building, the ‘sail’ looking skyscraper right in the city centre, and the facilities are top-class. Enjoy a fitness centre, swimming pool, bar and restaurant on site, as well as gorgeous luxury rooms and 5* service. Click here for more information and to book. 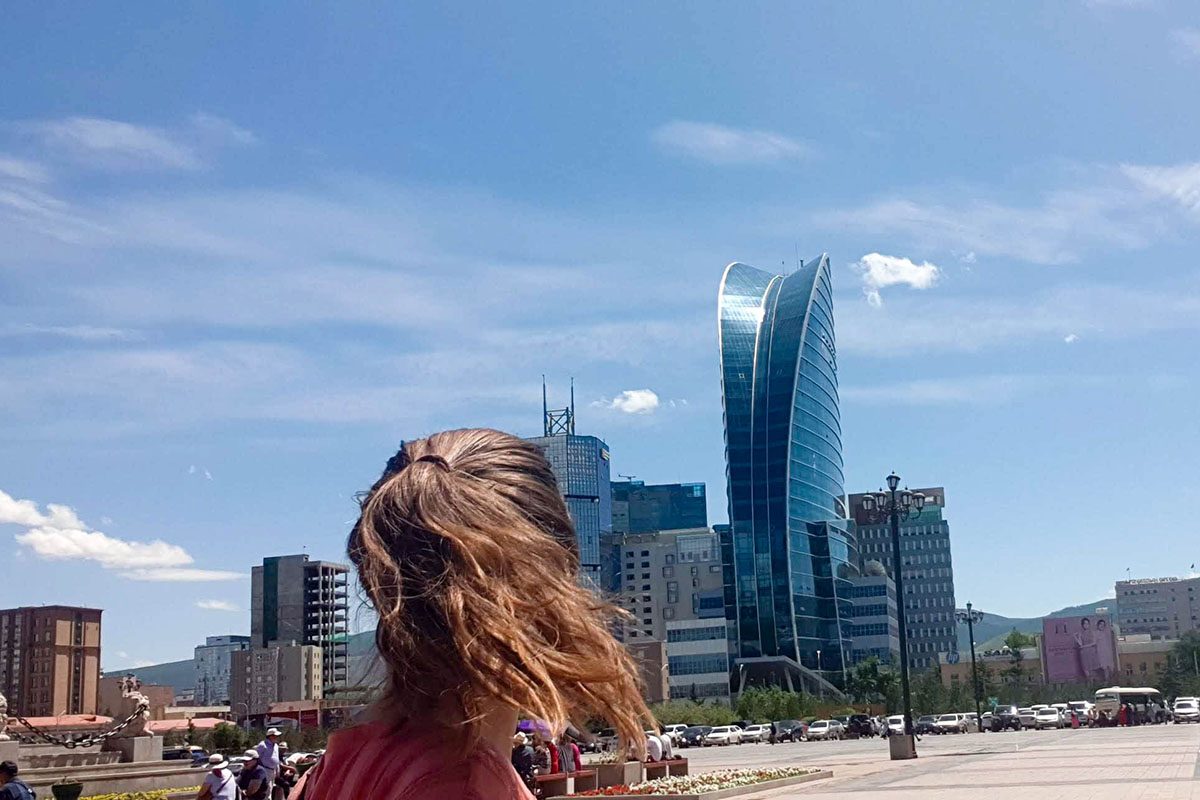 I spent a lot of time in Ulaanbaatar, and only very little in the rest of Mongolia. This was due to hanging around waiting for visas, and certainly not due to the lack of exciting things to do in this country.

I highly recommend you do not do the same as me, and check some of these fab things to do in Mongolia out.

Most of Mongolia is best visited by a tour. I haven’t taken any myself, so can’t speak from personal experience, but G Adventures are highly rated and offer sustainable tours in Mongolia. 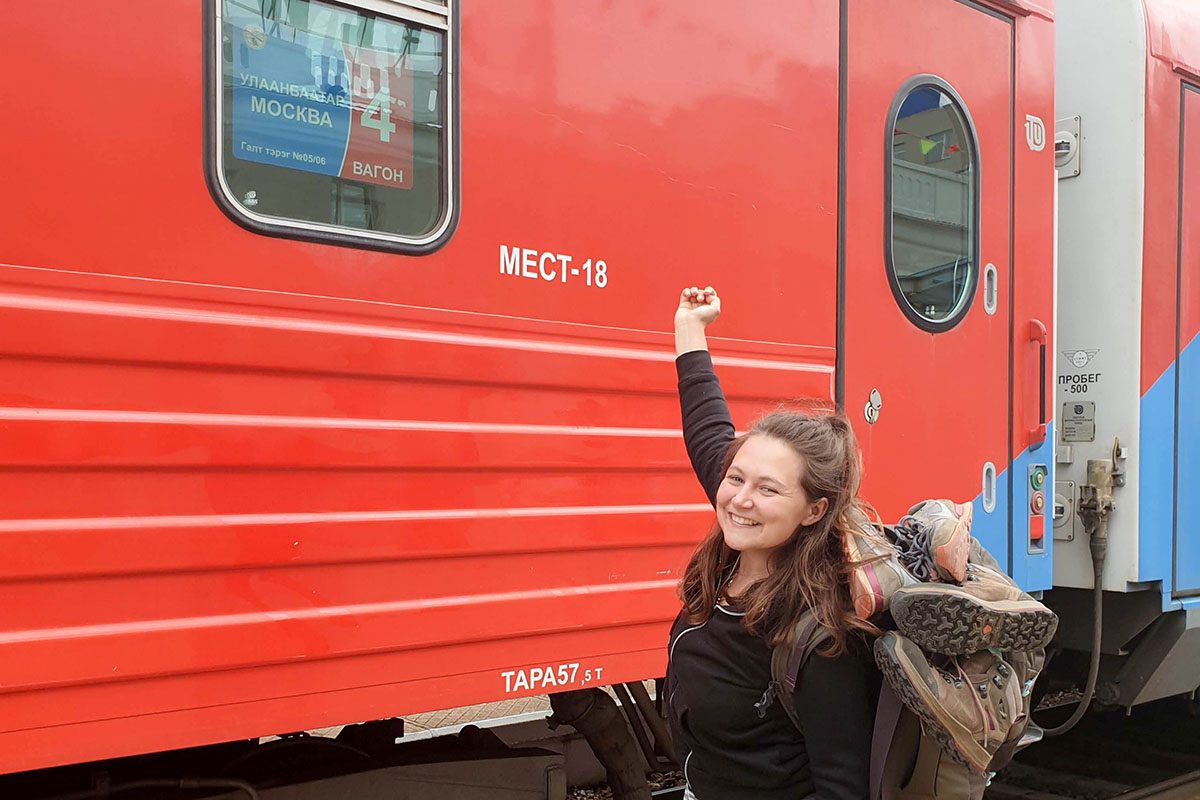 If your next destination is not in Mongolia and you’re travelling overland, you’ll be entering Russia or China. Both visas are – ahem – interesting to obtain. If you don’t have any visas pre-organised it is possible (I did it) to get a Russian transit visa in Ulaanbaatar and transit to Kazakhstan, Ukraine, Finland or South Korea overland OR transit to Moscow and fly.

You can also, of course, fly from Ulaanbaatar airport – although flights are quite pricey and while you’re in Mongolia, I’d really recommend trying to see some of its neighbouring countries. It’s a wonderful part of the world.

You can check out my China posts here.

4 thoughts on “Amazing Things to do in Ulaanbaatar”