The archipelago of the Philippines is a corner of South East Asia that’s strikingly different from anywhere else on the continent. The unique fusion of Spanish, Chinese, American and Native cultures make it really a place of its own.

Despite travelling around a lot of South East Asia over the last three years, I’d never made it as far as the Philippines. I’m not exactly sure why – my path had just never taken me there. That all changed, however, when I was invited on a press trip to the country.

We visited Manila, Boracay and Panay Island on the press trip, and I got to see both beautiful beaches that the country is known for and authentic Philippine culture. Panay Island is a fantastic place to experience the best of both worlds – you’ve got the busy beaches of Boracay, the lesser-visited beaches of Isla Gigantes, and many cultural attractions in between.

So, here’s a Panay itinerary, perfect for anyone planning a trip to Panay Island. It was put together by the experts at the Philippine tourism board, and I’ll let you know what I personally thought of each stop as we go!

First, let’s start with not one, but two disclaimers (it’s all fun and games here, I promise)…Disclaimer: I was invited to the Philippines as a guest of the Philippine tourism board. However, all opinions remain my own.

Disclaimer 2: Some of the links in this post are affiliate links. If you make a purchase through these links, I get a small commission at no extra cost to you. This is just one way that I keep this site going!

Now that’s out the way, let’s delve into this Panay itinerary and see how you can plan a trip to Panay!

How to Get to Panay Island

We flew from Manila to Panay Island; Philippine Airlines and Cebu Pacific serve Caticlan and Roxas. You can also fly into Iloilo, the biggest city on the island, but that’s way further south.

If you’ve read this blog before, you’ll know that I <3 overland travel, so actually, if I was visiting Panay independently, I’d try to do a mad overland and sea adventure to get here. I’m not sure exactly how I’d do it, yet, but I’ve spoken to people and I know that it’s possible via the Philippine marine highway.

When to go to Panay Island

Travel in the Philippines can be a little seasonal due to its dramatic rainy-and-typhoon season. As a spoiler: one of our activities got rained off in late November, as there was a typhoon heading our way, so they can hit out of season. However, typhoon season generally ends in October.

The best months to visit Panay Island, and most of the Philippines, are thus December – June, when the weather is generally dry and sunny.

This Panay Island itinerary features a range of stops, each famous in their own way. 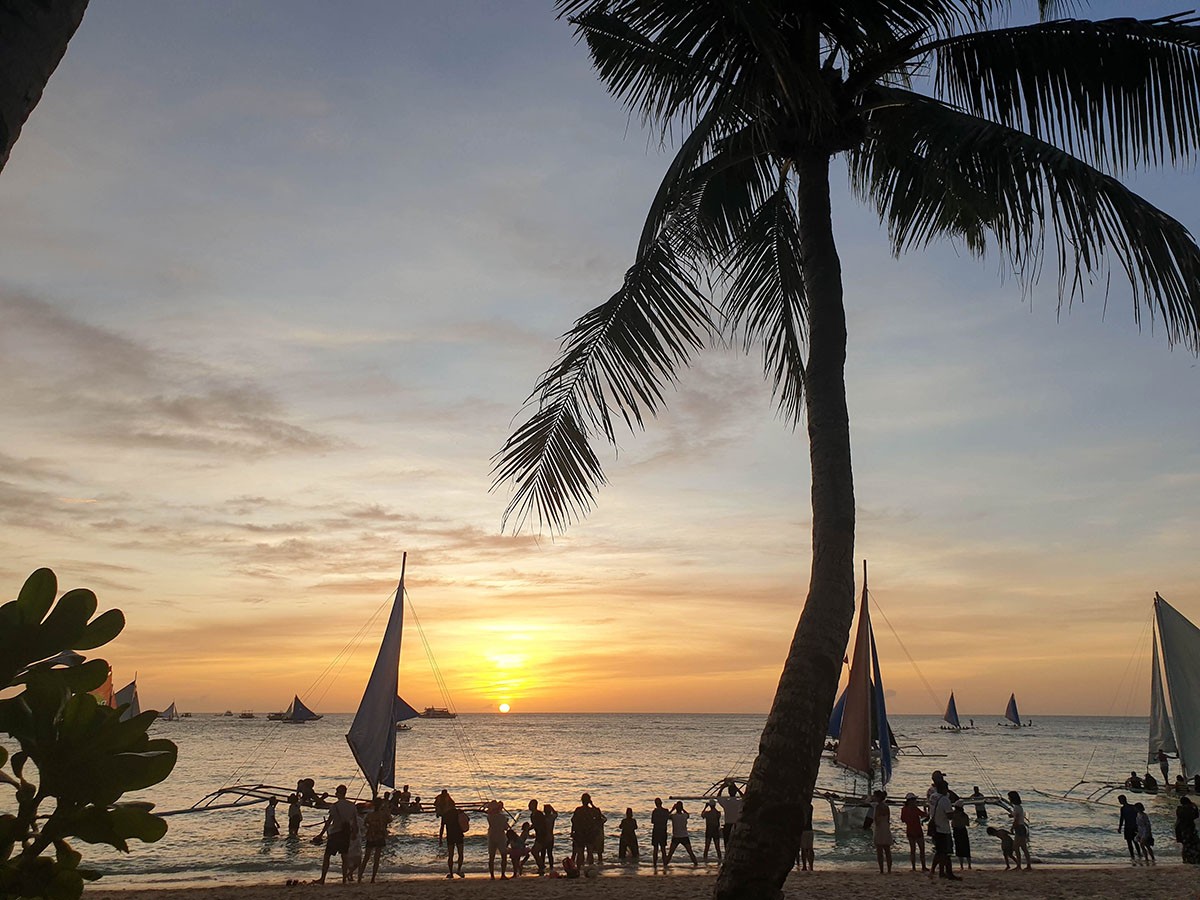 Let’s get real… most people who come to Panay Island hop straight over to Boracay, and most of them don’t leave. Boracay is a world-famous beach destination, which sprang into the public eye even more so last year when it had to close due to the ill effects of over-tourism.

However, Boracay is back, better than ever. It’s now more of a luxury beach destination than a backpacker’s party haven, and if you’re looking for beautiful beaches, luxury hotels, and plenty of bars and restaurants, Boracay is a good place to base for a couple of days.

If I’m being completely honest, Boracay isn’t really my thing – here are some of my thoughts about visiting Boracay in 2020 – but I can see the appeal for those who want to enjoy luxury and just flop out on a beach for a couple of days. It also balances this Panay Itinerary well, as the following few days focus more on cultural activities. 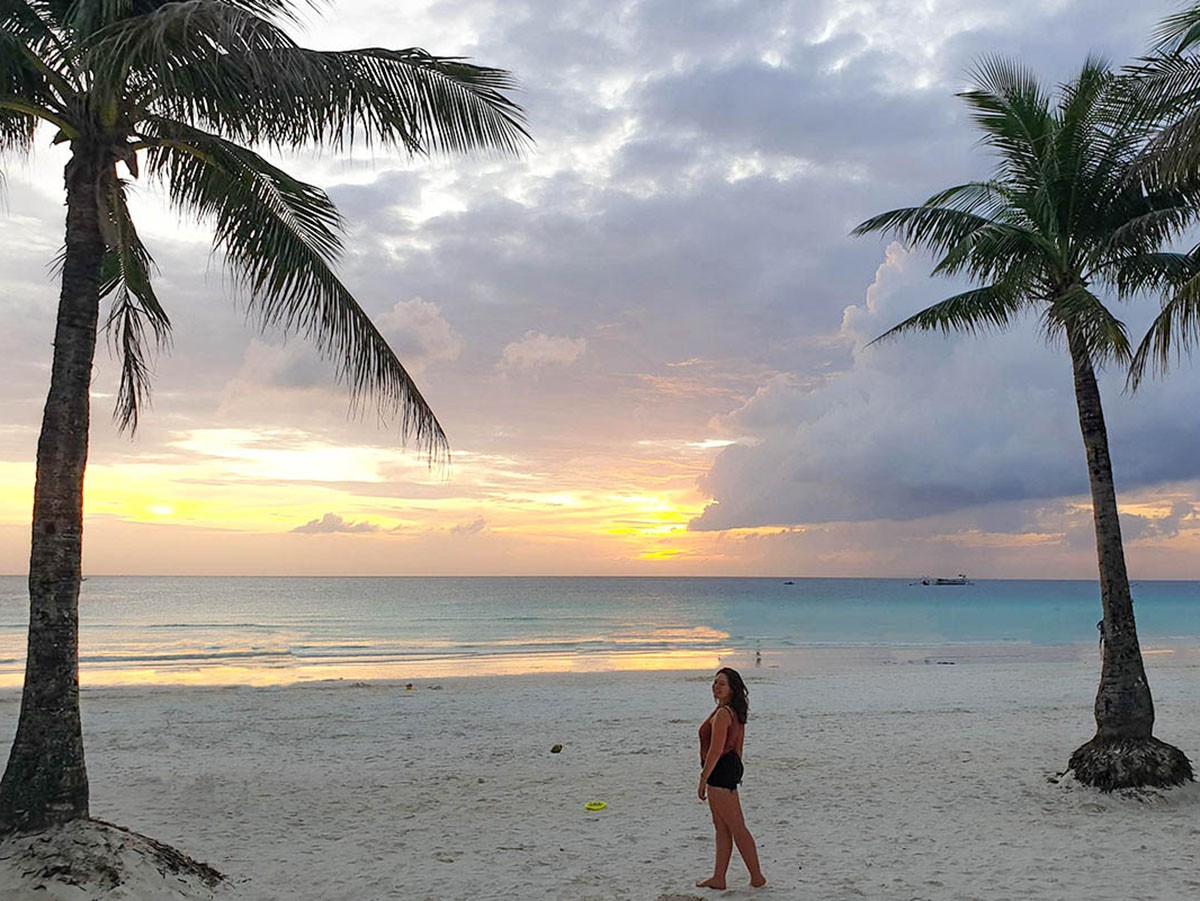 There isn’t a whole lot to do in Boracay, other than enjoy the resorts, have some beach time, and do some watersports, although I would highly recommend a massage at Mandala Spa (which seriously cured a red horse and Filipino rum hangover I was struggling with!) and a sunset cruise.

Where to Stay in Boracay

Discovery Shores is a beachfront 5* property, with gorgeous rooms with luxury features, one of the comfiest beds I’ve ever slept in and a complimentary in-room foot massages.

The beachfront bar is great for sunset, and there’s also a rooftop 360 bar with a plunge pool. The poolside rooms are luxurious, but the executive suites are something else – many with their own plunge pool and other amazing luxury features. Click here for more information and to book. 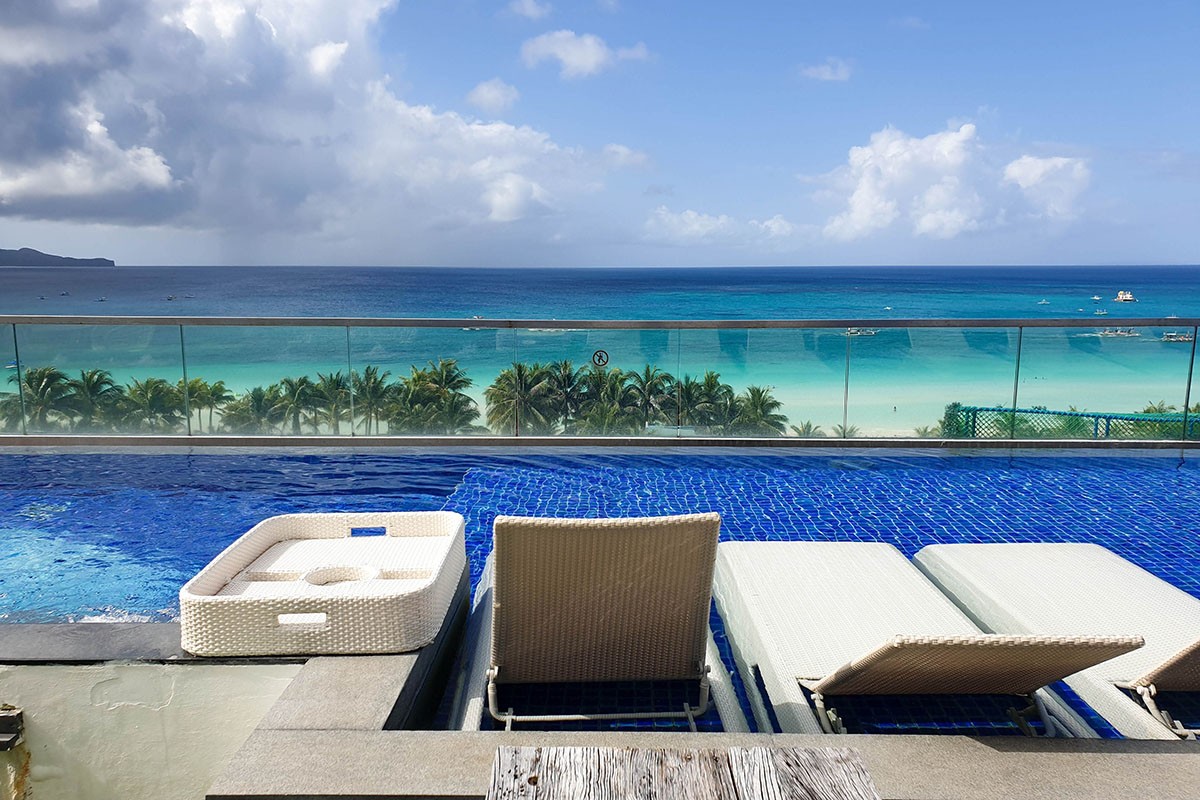 Back on the mainland, Caticlan is where the airport for Boracay is based and where you will fly into. You’ll need to come back here after your stint in Boracay, and following this Panay itinerary, you’ll head eastwards. There are, however, a few interesting stops along the way…

From Caticlan wharf, you can take a tricycle to the Motag Living Heritage Museum. 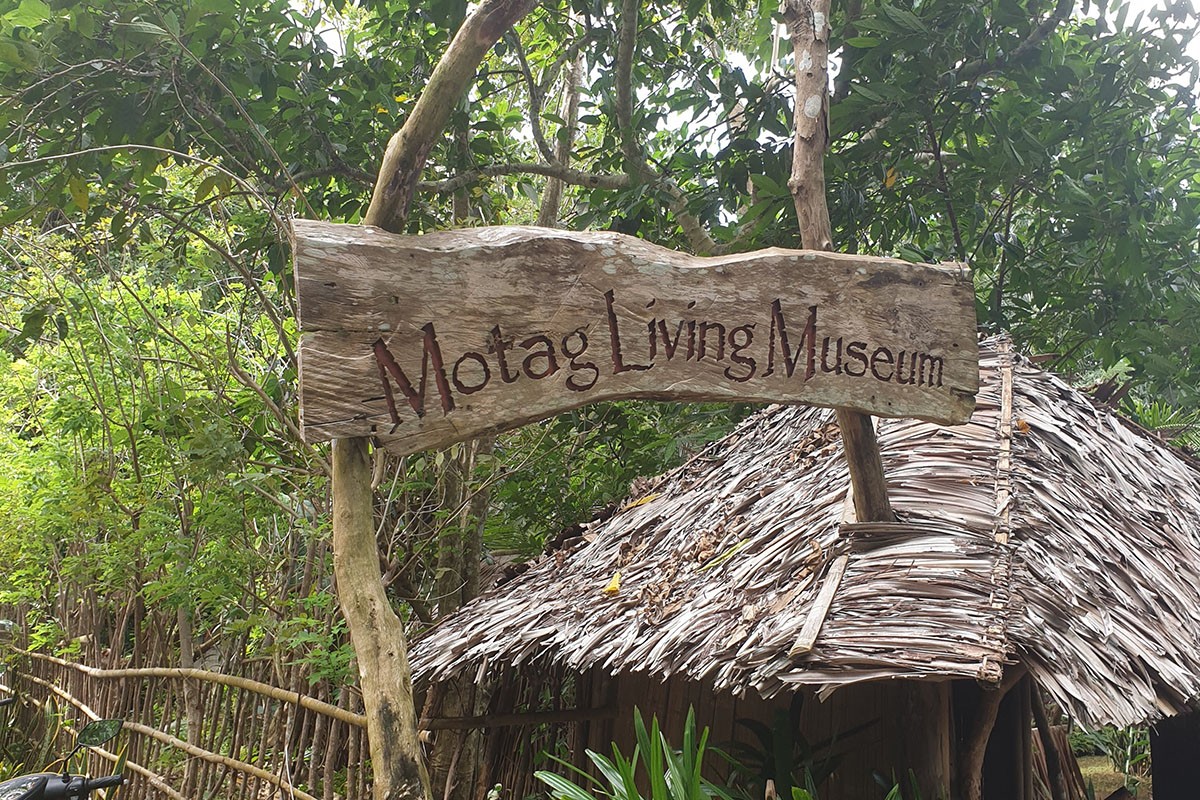 This museum focuses on rural Pinoy life, with exhibits about weaving, the house, and rice planting. It’s an interactive museum, with guests able to have the chance to get involved in some of the activities. We were actually joined by a CNN film crew and Miss Philippines – we were the backing actors…

However, we were told normally you don’t end up on TV at the Motag Living Heritage Museum. Most guests just enjoy the rural surroundings and learn a little more about local life.

Then, take a van bound to Kalibo Terminal. It will cost around 90 pesos per person and take around 2 hours.

Where to Stay in Kalibo

We didn’t stay in Kalibo, but Royal Suites Condotel is a 3* property with great reviews. It is clean and well serviced, with an onsite fitness centre and included breakfast with room rates. Click here for more information.

From Kalibo town, you can take a 15-minute tricycle ride to the Mangrove Forest for P40/special ride. 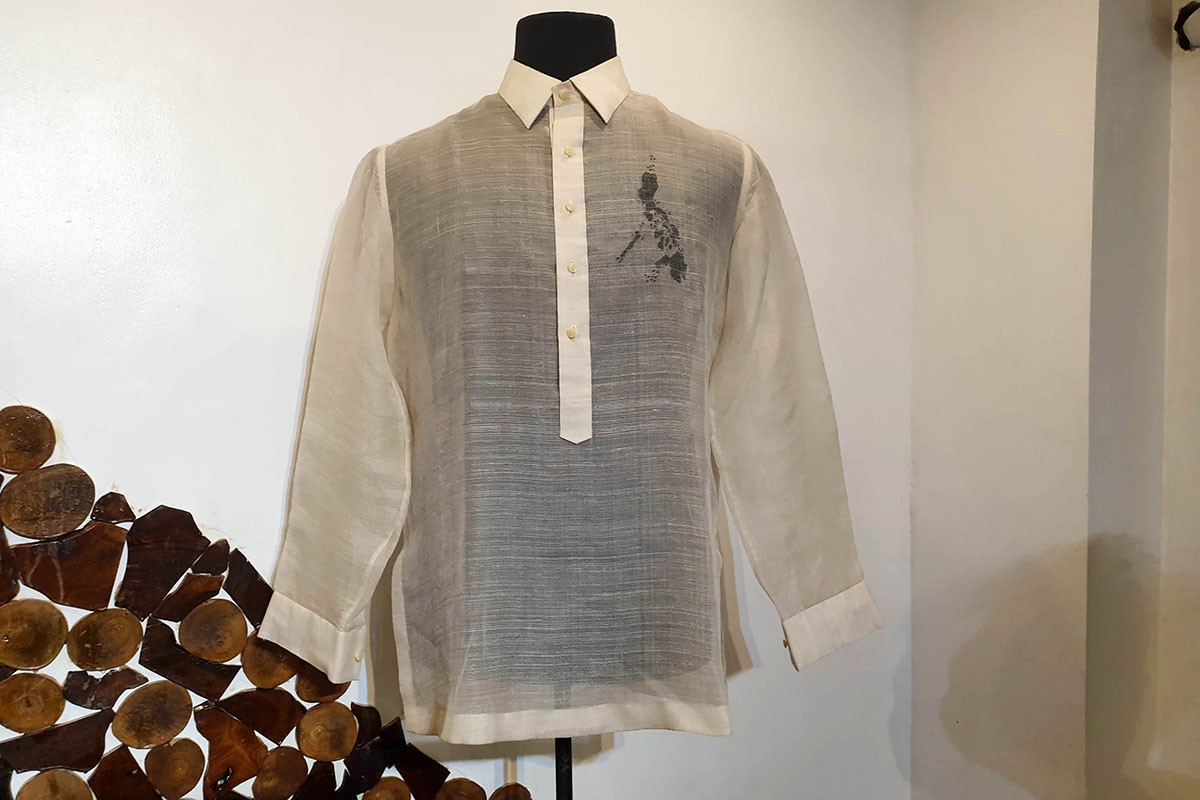 Venturing further west, there’s the Pina Weaving workshop. Here, you’ll get the chance to learn all about how a man makes clothes by pineapple fibers. It’s a really unique craft, and you’ll get to go on a guided tour around the workshop. 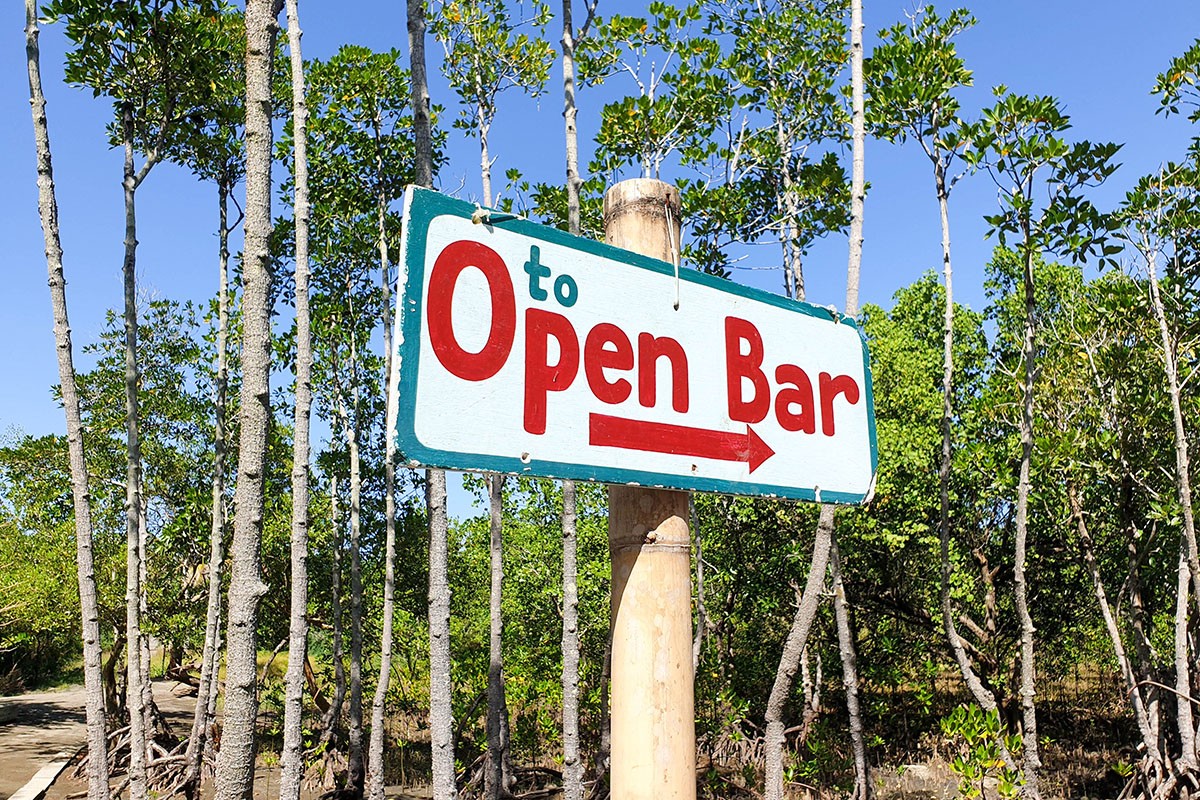 The mangroves are a lovely nature spot to visit in Panay, with elevated walkways going through the dense bushes. They finish at the sea, where there is a sign to both a free bar and Jolibee’s (if you’ve been to the Philippines, you’ll know all about this place, if you haven’t, I won’t spoil the surprise). We did manage to get a Red Horse (ridiculously strong Filipino beer) here, and there’s also the opportunity to try the local specialty of tamaloc, a woodworm. I stuck to the Red Horse! 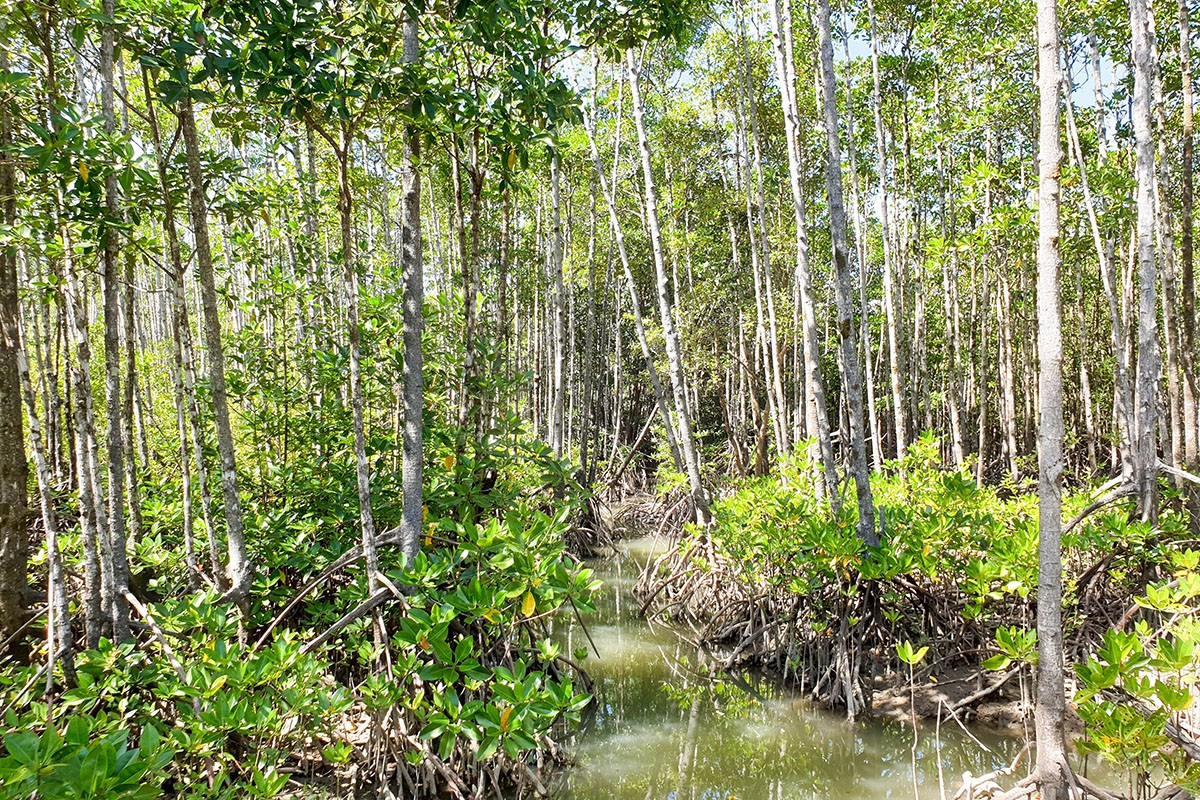 To get from Kalibo to Roxas, take a passenger van, taking 2 hours, for 100 pesos per person.

Driving onwards across Panay Island’s North Coast, your next stop on this itinerary is Roxas. This is famed for being the birthplace of Roxas, the ex-president of the Philippines, and is the second-largest city in Panay Island.

However, compared to Metro Manila and Cebu, Roxas is a chilled-out city with some interesting tourist attractions for history and culture fans.

After its fame for being the residence of its ex-president, Roxas also enjoys a reputation as the seafood capital of the Philippines. They’re big on seafood here, so if you want to enjoy some seafood on your Panay itinerary, here’s the place. We ate at Siguin Fish Harvesting for dinner – if you’re veggie, they do some non-seafood options as well. 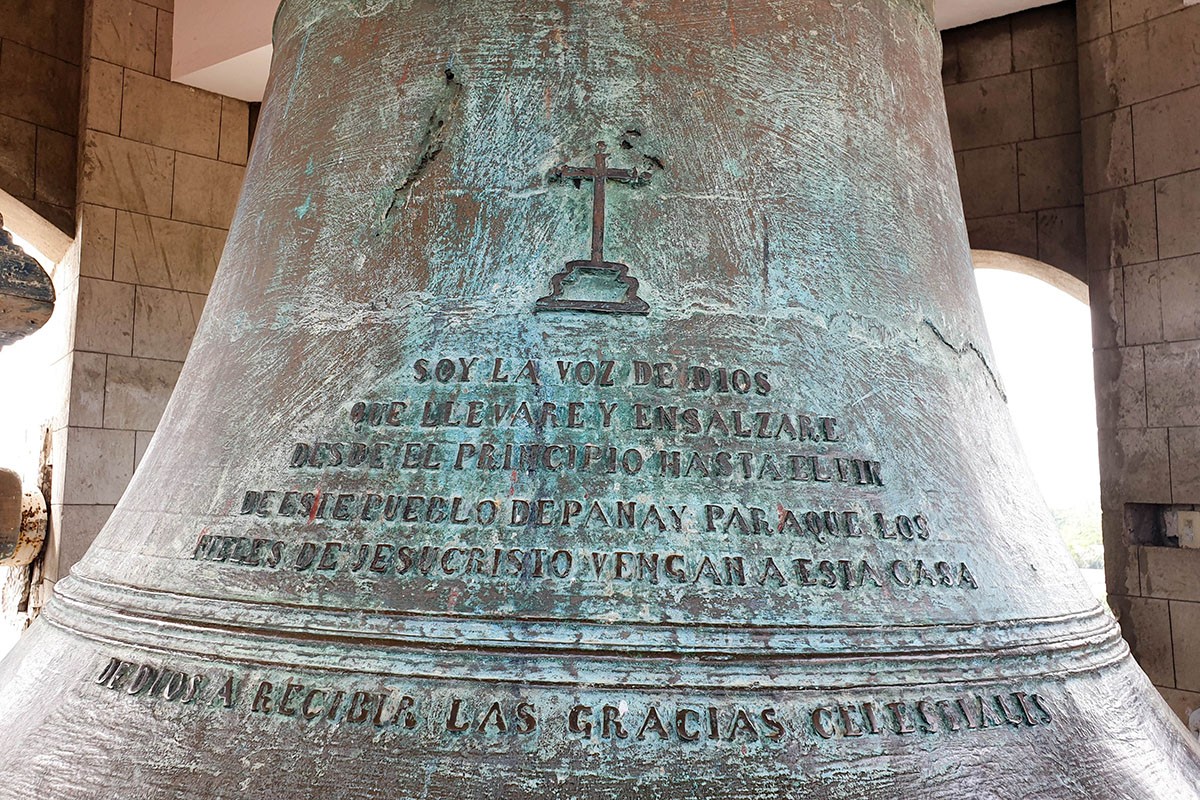 Roxas is home to a beautiful Catholic church and the oldest bell in South East Asia. You’ve got to climb up (how many?) steps to reach it, but it’s definitely worth checking out. You’ll even see some inscriptions in Spanish on the bell itself, a clear note of the Philippines’ past! 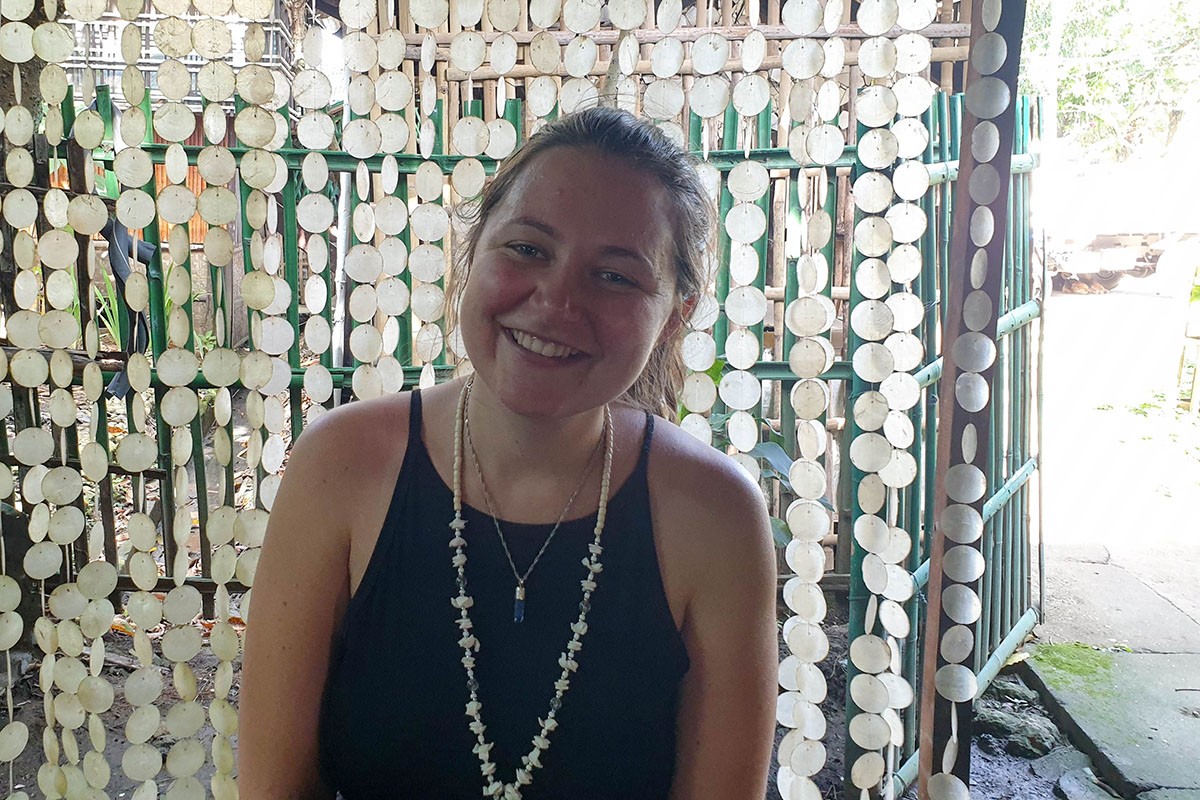 Roxas isn’t only famous for seafood and its ex-president – it’s also known as the prime clam shell jewellery maker in the country. It’s actually a lot cooler than it sounds – and you can go to the workshop and learn how it’s made yourself.

Roxas Museum is a small establishment but has a lot of information about the city during different periods. It talks about the native people of the region, as well as local wine and marine creatures in the area. The museum has exhibits from the Spanish period, the American period and a little from the Japanese period, as well as a meaningful exhibit on Philippine independence and the president, Roxas, links to the city.

Hold your nose when you go here… something smells a bit fishy. Even if you are the biggest fish fan, I’m not so sure if you’ll find this appetizing. However, it’s a local market, and it’s interesting to walk around. There’s a guy who makes and sells waffles for 10 pesos a pop as well! 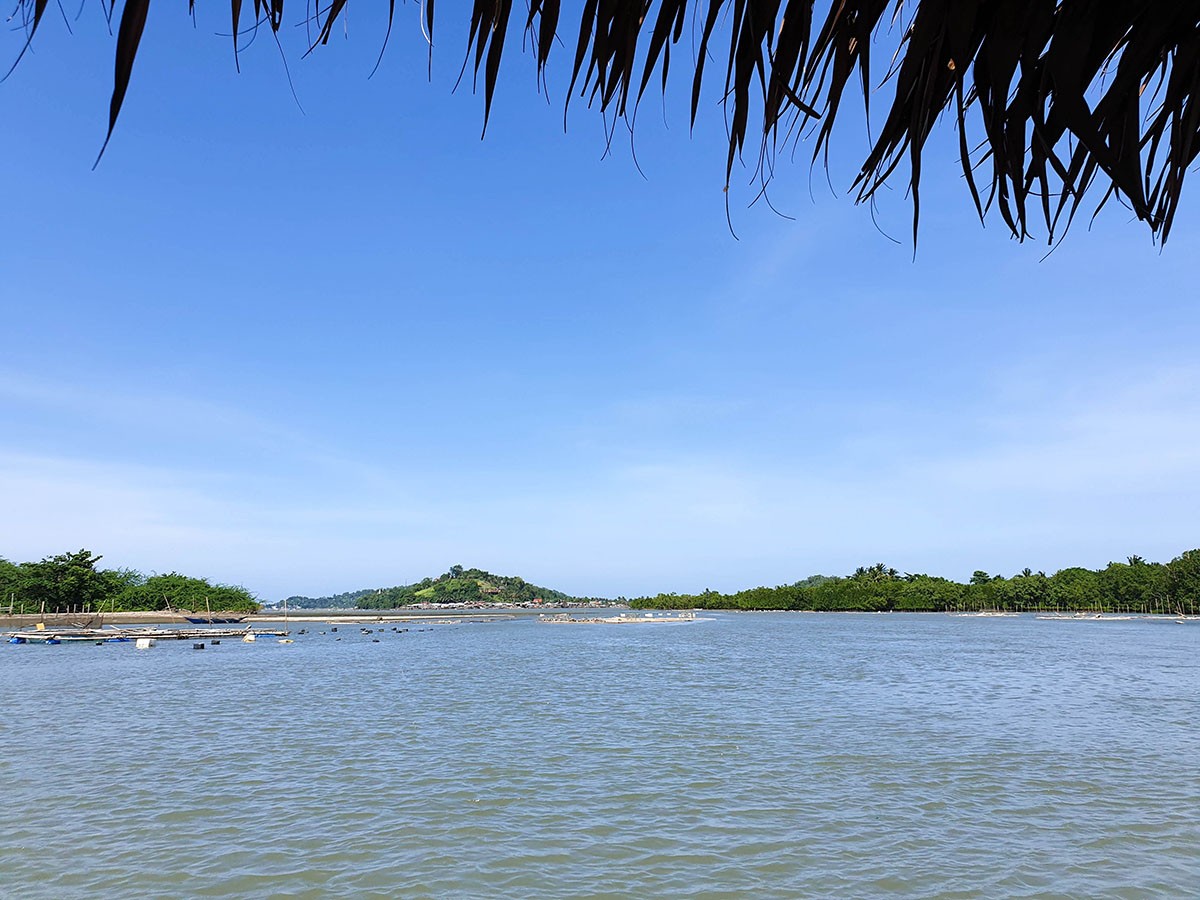 After a tour of Roxas, you can take a lunch cruise around the shore and to a couple of sandbars. There’s food on the boat, as well as entertainment, massages and a guide pointing out the flora and fauna of the area. After the cruise, you’re graced with a traditional Filipino performance.

Where to Stay in Roxas

The 4* outside-based Espacio Verde hotel has period decor styled rooms, all with their own en-suite, high speed WiFi and A/C. There’s also a pool with a water slide, perfect for any kids or adult kids! There’s a bar and restaurant on site as well. Click here for more information and to book. 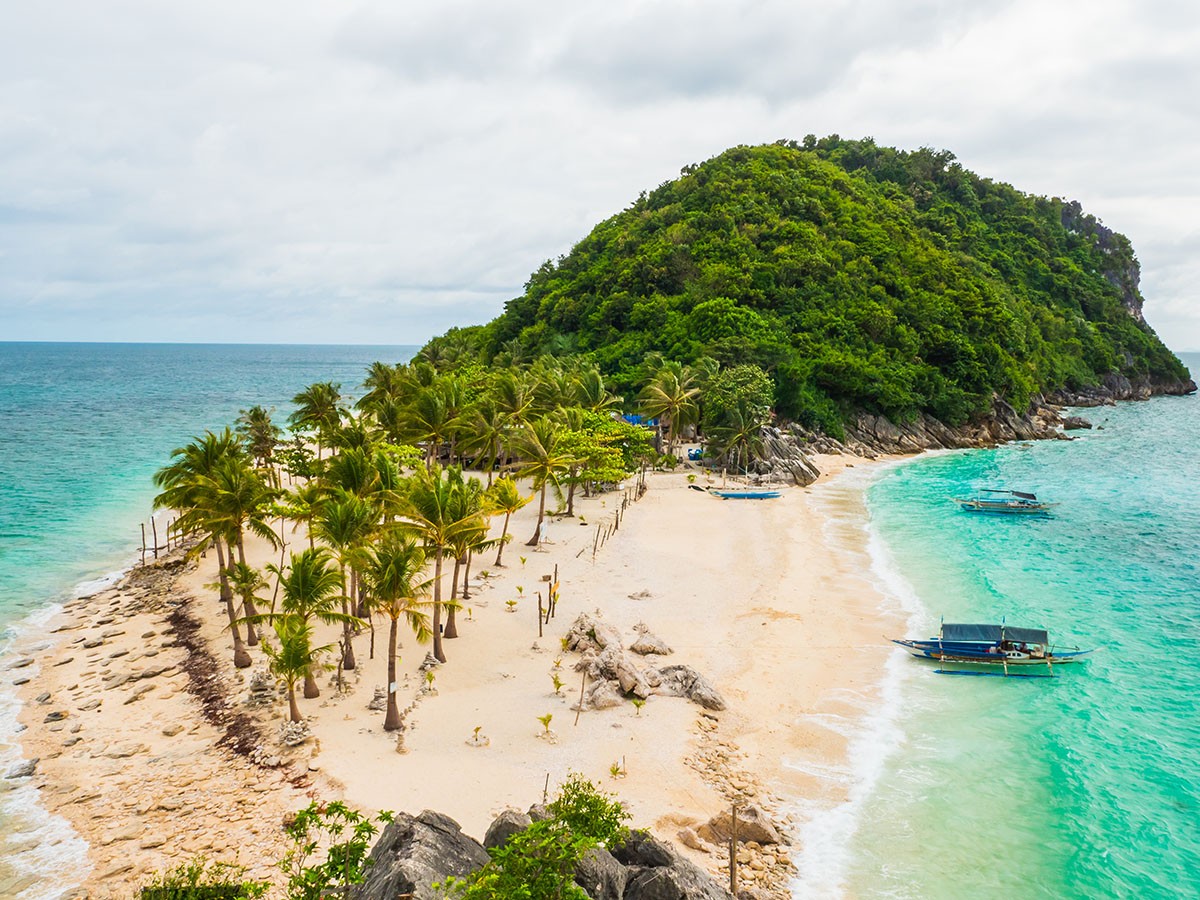 We, unfortunately, didn’t get the chance to see the Islas Gigantes, due to bad weather on the day we were supposed to do the boat trip (sod’s law eh, it was, of course, beautiful weather every other day…).

However, I’ve heard they are really beautiful, and I think they’re definitely worth a stop on your Panay Itinerary.

Where to Stay near Islas Gigantes

The Solina Beach and Nature Resort is the main jumping point for tours to the Islas Gigantes. While we didn’t get the chance to do the tour, we did stay at the resort, and it was really lovely. Many of the rooms look like tents from the outside, with a kind of ‘glamping’ style (but make no mistake, they’re very much rooms from the inside!), and they have lots of comfy features and even included a fresh fruit platter on check-in! Click here for rates and to reserve your room.

I hope that this Panay Island itinerary has helped you to see some of the best things to do on Panay Island, and some great culture spots very near Boracay! Check out my guide to planning a trip to the Philippines to learn more about holidaying to this beautiful country!